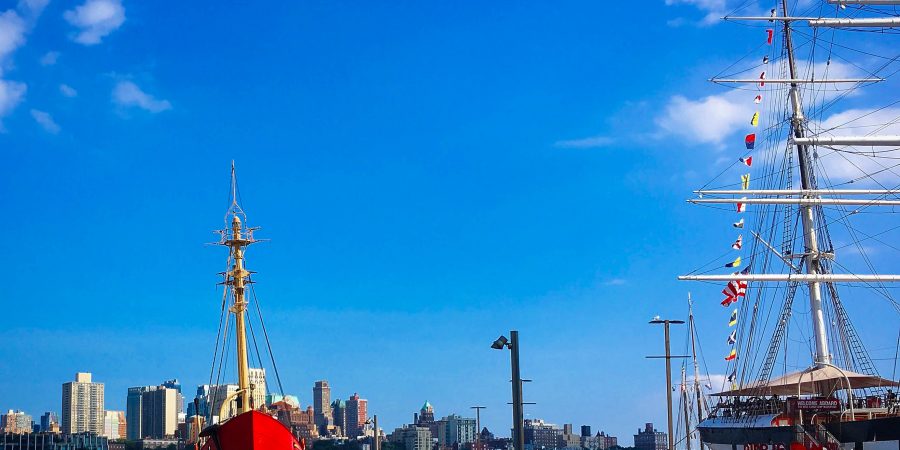 The Brooklyn Bridge dominates New York’s historic Seaport District the way that the Duomo de Santa Maria del Fiore dominates Florence, a graceful triumph of ingenuity and vision rising above the grit and urgency of the city. 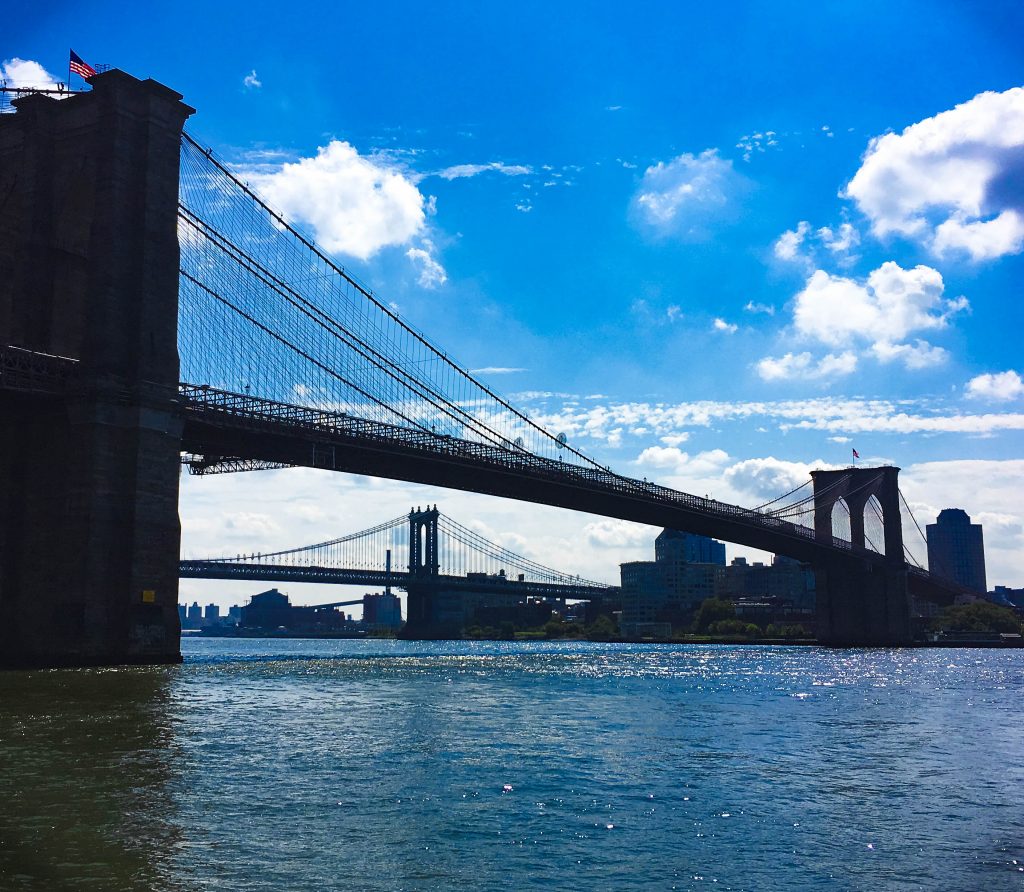 With its location across the East River from Brooklyn, the Seaport District was New York’s original commercial center back in the 17th century.  Today it’s a vibrant retail and residential hub.  But you can still stumble on early American history.

Nestled amid the soaring skyscrapers I found Fraunces Tavern, praised by John Adams during the First Continental Congress in 1774 for “The most splendid dinner I ever saw, a profusion of rich dishes.”  That sounded good enough for me.  The place was packed at dinnertime, but the Revolutionary feel began with the yellow and red brick exterior and lingered at the dim, TV-less, worn wooden bar.  I scored a stool and ordered dinner–no, not Brunswick stew or game pye or any dish I’m used to seeing at Colonial Williamsburg, but rather a Spanish tortilla.  I was so intrigued by the idea of Pinxtos at a Revolutionary tavern, and hoped to replicate the fabulous sampling I’d enjoyed last year in Newport.  John Adams’ praise would not have been misplaced.  The bread was warm and comforting, the Abredo cheese mild and creamy and gooey, and the Chorizon rich and tangy. 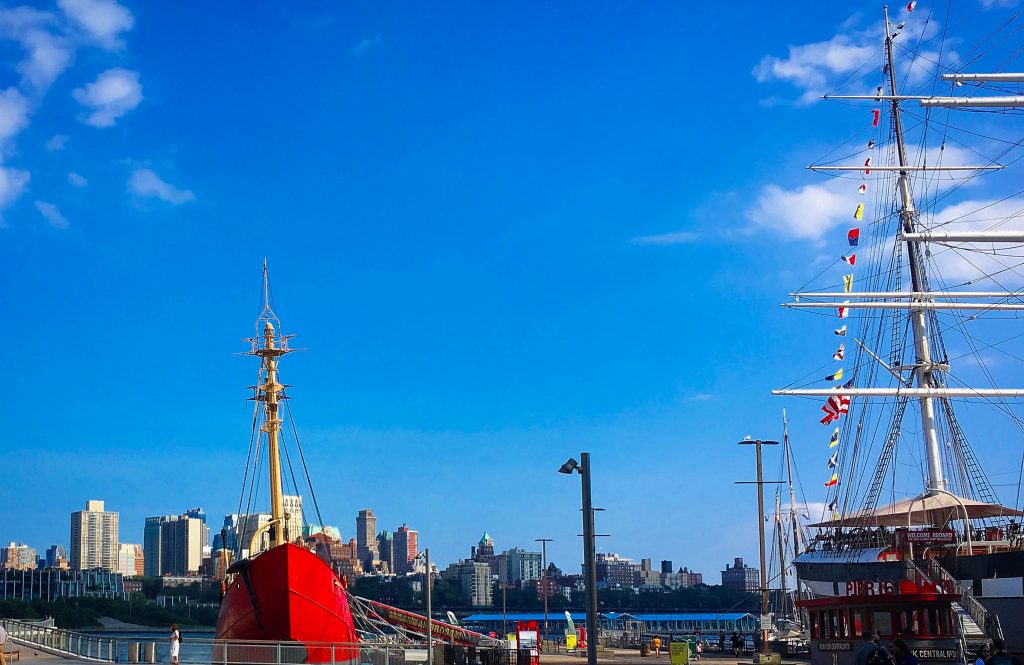 The good food fortune continued in the morning.  I walked over to Pier 17 for the BlogHer18 Creators Summit, this year’s incarnation of the conference I’d enjoyed last summer in Orlando.  Thanks to conference sponsors FreshDirect + FoodKick, I pieced together one of the most fabulously fresh breakfasts I’ve tasted since I was in Israel:

a teeny-tiny donut from Doughnut Plant, so pull-apart soft and bursting with raspberry flavor that I indulged in a second (they really were teeny-tiny),

a cup of sour-cherry Persian yogurt from Brooklyn-based father-daughter White Moustache, so rich and smooth I wanted to sample the date flavor as well but resisted,

a peach and a bunch of grapes, ripe and sweet and juicy, so I was glad to learn that FreshDirect delivers to Alexandria,

all washed down with sparkling water from Pret.

I also had my eye make-up touched up at the Honest Beauty sponsor station, the first time I’ve been in a make-up chair since my long-ago life as an occasional talking head.  I don’t usually wear mascara, especially in high heat, because it so often smudges.  But I let the bubbly make-up artist swab some on my curled lashes.  Equally delightful were the young women handing out generous samples–matte primer, lip crayon, and beauty balm.  Truth be told, I was soon swimming in sponsor swag, from eye masks from HydraFacial to Frizz Ease Secret Weapon from John Frieda.

But one of the most intriguing sponsors was BeforeYou, an app that helps families share their stories via text, photograph, audio, and video.  It’s based on research finding that children who know more of their family’s history are more secure in their own identities, form stronger attachments with others, and exhibit lower rates of anxiety and depression.

Just outside I had the chance to follow in the footsteps of someone who came before me.  In August 1776, the British dealt the Americans a crushing defeat at the Battle of Brooklyn.  George Washington’s exhausted army retreated to heavily fortified Brooklyn Heights.  British General William Howe began siege operations, intending to trap the Continental soldiers and force America to surrender.

General Washington had other ideas.  But Gen. Howe had him outnumbered six-to-one, and he knew he couldn’t hold Brooklyn Heights.  So he ordered an evacuation.  Under cover of night, heavy rainstorms, and a very helpful fog, an amphibious regiment from Marblehead, Massachusetts, first rowed the horses, cannon, ammunition, and supplies across the East River to Manhattan, their oars wrapped with cloth to muffle their sound.  Then they ferried the wounded and finally the remaining soldiers.  The operation took all night.  But when the fog lifted in the morning, Gen. Howe discovered that the Americans had escaped to fight another day.  The regiment who rowed back and forth through the night, ferrying the fate of a nation to safety, was the 14th Continental, also known as Glover’s Regiment or the Marblehead Mariners.  Their commander was my great-great-great-great-great-great-great-grandfather, John Glover. 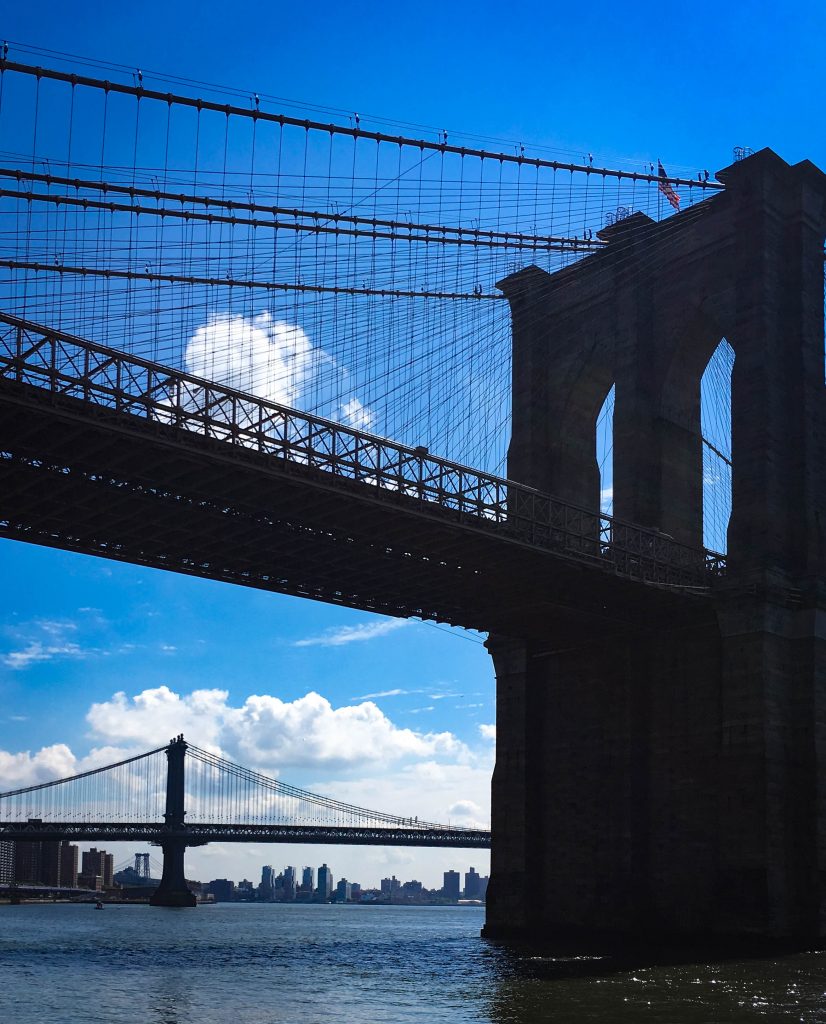 Within a few decades of the Marblehead Mariners’ successful operation, serious talk began of a bridge to connect Brooklyn with Manhattan.  But the idea wasn’t considered feasible until 1867, after engineer John Roebling designed what would become the world’s first steel-wire suspension bridge–and Boss Tweed bribed enough Aldermen to secure funding for it.

Construction began in 1869.  Sadly, John Roebling never saw it.  He was taking final compass readings across the East River when a boat smashed the toes on one of his feet.  Part of the foot had to be amputated.  And then he died anyway three weeks later from tetanus.  His 32-year-old son Washington Roebling took over the project.

The first major step was building a foundation at the bottom of the East River.  This required workers, called sandhogs, to excavate the riverbed.  They did so from inside enormous wooden boxes called caissons.  Compressed air kept the water out and breathable oxygen in.  Workers were transported down to and back up from the caissons in narrow iron containers called airlocks.  We know today that rising too rapidly in such conditions causes a disease called the bends–marked by numbness, convulsions, impaired speech, severe joint pain, and sometimes paralysis or even death.  Several sandhogs died this way.  And Washington Roebling was paralyzed–partially but permanently.  His wife Emily Warren Roebling took over the project.

While men from John Roebling to unsung sandhogs sacrificed their lives to the bridge, at least one dishonest supplier was risking many others.  J. Lloyd Haight delivered faulty cable wire.  The dishonesty and danger weren’t realized until after the bad wire had been built into the bridge.  Workers strengthened it with additional wire.

The reinforcement apparently worked.  The Brooklyn Bridge opened on May 24, 1883, with Emily Roebling taking the first ceremonial carriage ride across.  It stands today as a wonder not just of engineering and persistence but also of beauty and inspiration, with its graceful curves, tall towers, and gothic arches.

I was tempted to walk across it, but I knew I didn’t have enough time to explore Brooklyn.  So I headed back to the Fraunces Tavern, where a museum sits atop the restaurant.  It celebrates the importance of taverns as community centers in early America.  And it houses artifacts that tell the personal stories of the Revolution, from Martha Washington’s pointy-toed, gold-colored silk shoe to the last known letter from young spy Nathan Hale before he lost his one life for his newborn country.  Fans of the series TURN:  Washington’s Spies will enjoy the special exhibit Confidential:  The American Revolution’s Agents of Espionage, which tells the true story of New York’s Culper Spy Ring with records like a 1782 letter from Benjamin Tallmadge to Gen. Washington.

People interested in early American luxury lifestyle will enjoy the Clinton Room.  It is named for George Clinton, the first American governor of New York, who hosted a dinner party for Gen. Washington at Fraunces Tavern to celebrate the evacuation of the British army from Manhattan on November 25, 1783.  The room is a recreation of a Federalist-style dining room.  It displays Chippendale furniture and Chinese porcelain.  But its most notable feature is the Zuber wallpaper. 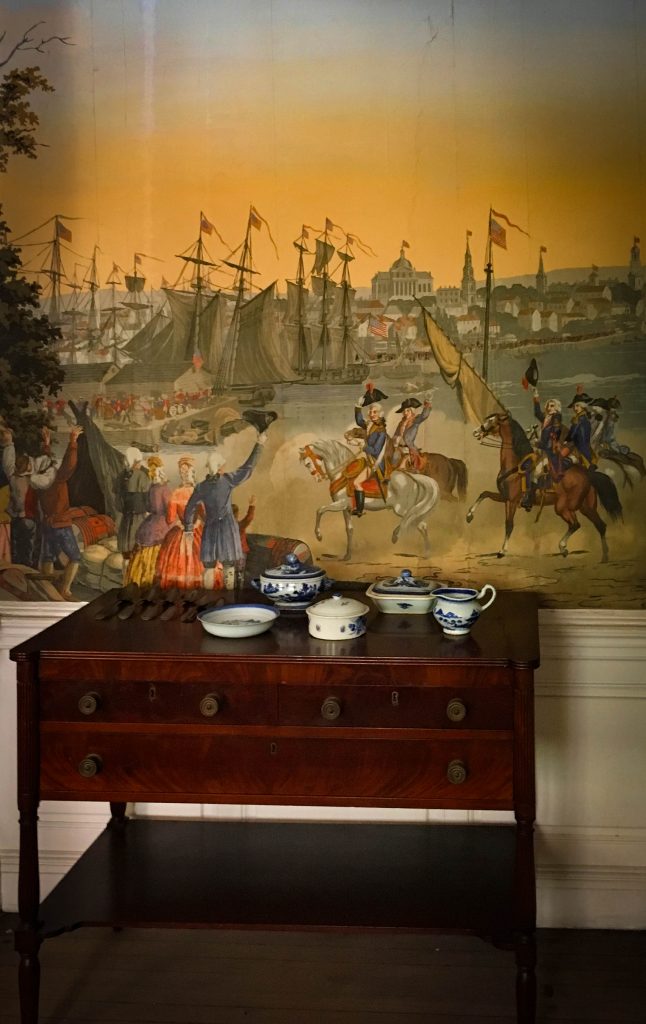 Founded in France in 1797, chosen by Jacqueline Kennedy to repaper the Diplomatic Reception Room in the White House, and still in operation today, the Zuber company is best known for its hand-printed scenes of historic moments set in incongruous places.  The paper in the Clinton Room comprises one of only 11 known sets designed in 1838.

But the most storied room is the far plainer Long Room, with its simple wooden furniture and pewter dishware.  It’s where the victorious Gen. Washington bade farewell to some of his officers before returning to Mount Vernon.  “With a heart full of love and gratitude I now take leave of you,” Col. Tallmadge records the General.  “I most devoutly wish that your latter days may be as prosperous and happy as your former ones have been glorious and honorable.”  But Gen. Glover wasn’t there. 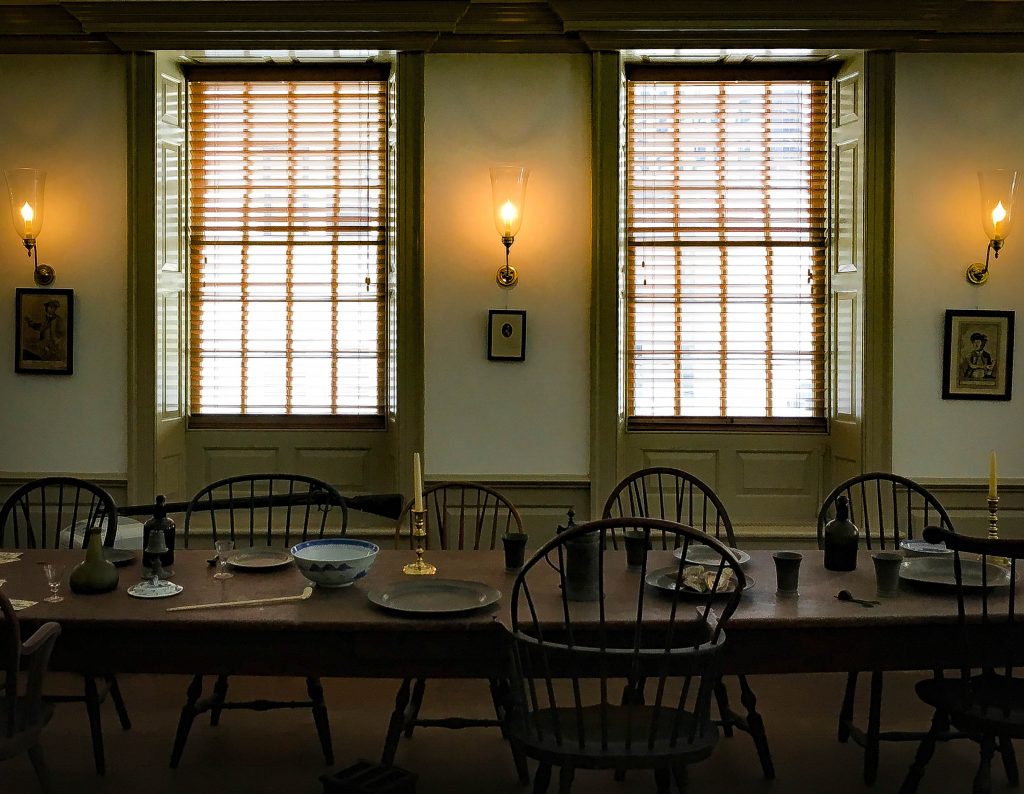 All in all, I was in the Seaport District for only about 28 hours.  But in that time I savored important American history, ate two great meals, and logged nine miles on my fitbit.  And my Honest Beauty mascara never smudged.

What to Know before You Go to the Seaport District

How to get there:

I haven’t driven on surface streets in New York since the time I got lost there more than a decade ago and still don’t recommend it.  If you have to fly, I recommend LaGuardia airport over the even more hectic Kennedy.  But if you’re coming from anywhere on the East Coast north of Fredericksburg, I suggest taking the train.  It isn’t perfect.  My trains both coming and going were late, the former significantly and causing me to miss a chunk of the conference.  But it’s much more comfortable and less intrusive than flying and consumes about the same amount of total travel time.  With apologies to Winston Churchill, the train is the worst way to get to New York except for all the others.

How to get around:

Walk.  Manhattan isn’t one of the truly great places to walk like Boston.  It’s too cramped.  But it is an intriguing place to walk, with gems hidden along its narrow streets.  If I hadn’t decided to explore the the Seaport District on foot, I might not have found Fraunces Tavern.

Uber.  If you’re going too far to walk, Uber is quick, easy, and efficient.  I rode it to the Seaport District from Penn Station and back.  Be aware though that New York will even tax your tip.

New York isn’t just expensive; it’s ridiculously overpriced.  I stayed the night in a small, dark, noisy room and spent more for it than I’ve paid for a suite at the Encore in Las Vegas, a corner room with two balconies at the Hilton Hawaiian Village on Waikiki, and a one-bedroom, two-storey apartment in Paris.  That’s another reason I missed part of the conference; I wasn’t going to pay that much for more than one night.  And the hotels apparently apply much of that money to lobbying:  AirBnb is under attack in New York.  It’s illegal to rent your own place out for under 30 days unless you’re there too.  My advice:  Compress your schedule.  Pick the area where you want to spend the most time and choose a central place that you can afford so that you can see and do what you want without wasting time on ground transportation.  Keep your stay on the short side.  Manhattan is not the place for a two-week vacation if you want to get the most bang from your travel buck.

Northeast weather is hot and humid in the summer, cold and damp in the winter, and always unpredictable.  Pack coordinating layers in fabrics suitable for the time of year.  Yes, New York is trendy, and if your personal style is also trendy, go for it.  But you can never go wrong with classic.  The best style for you is the one that feels comfortable, that suits your figure, your age, your plans, your personality.  So wear the clothes you like, that make you feel confident.  You can notch them up with accessories:  statement jewelry, a chic belt, a great bag, cute but comfortable shoes.  And always remember:  Red lipstick covers a multitude of style sins.  I got more compliments on my Smashbox Bing shade than on anything else I wore. 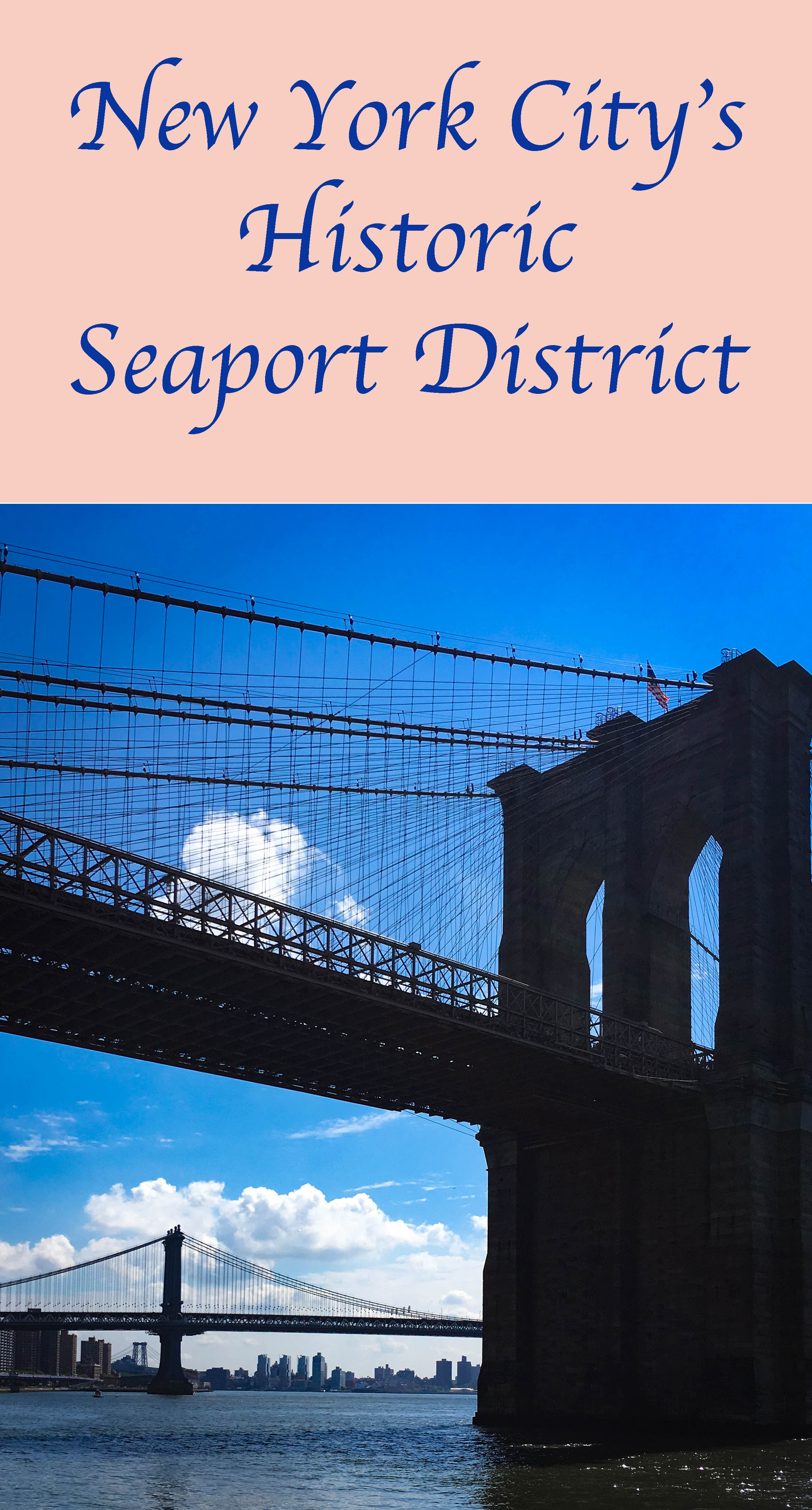 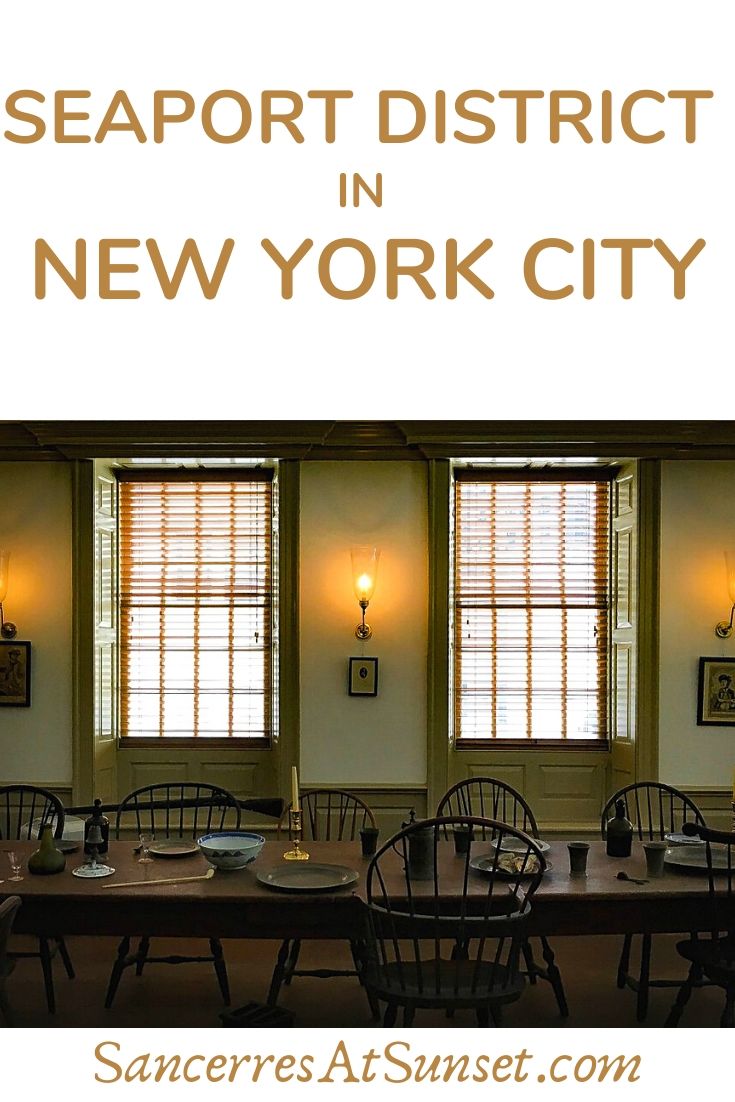 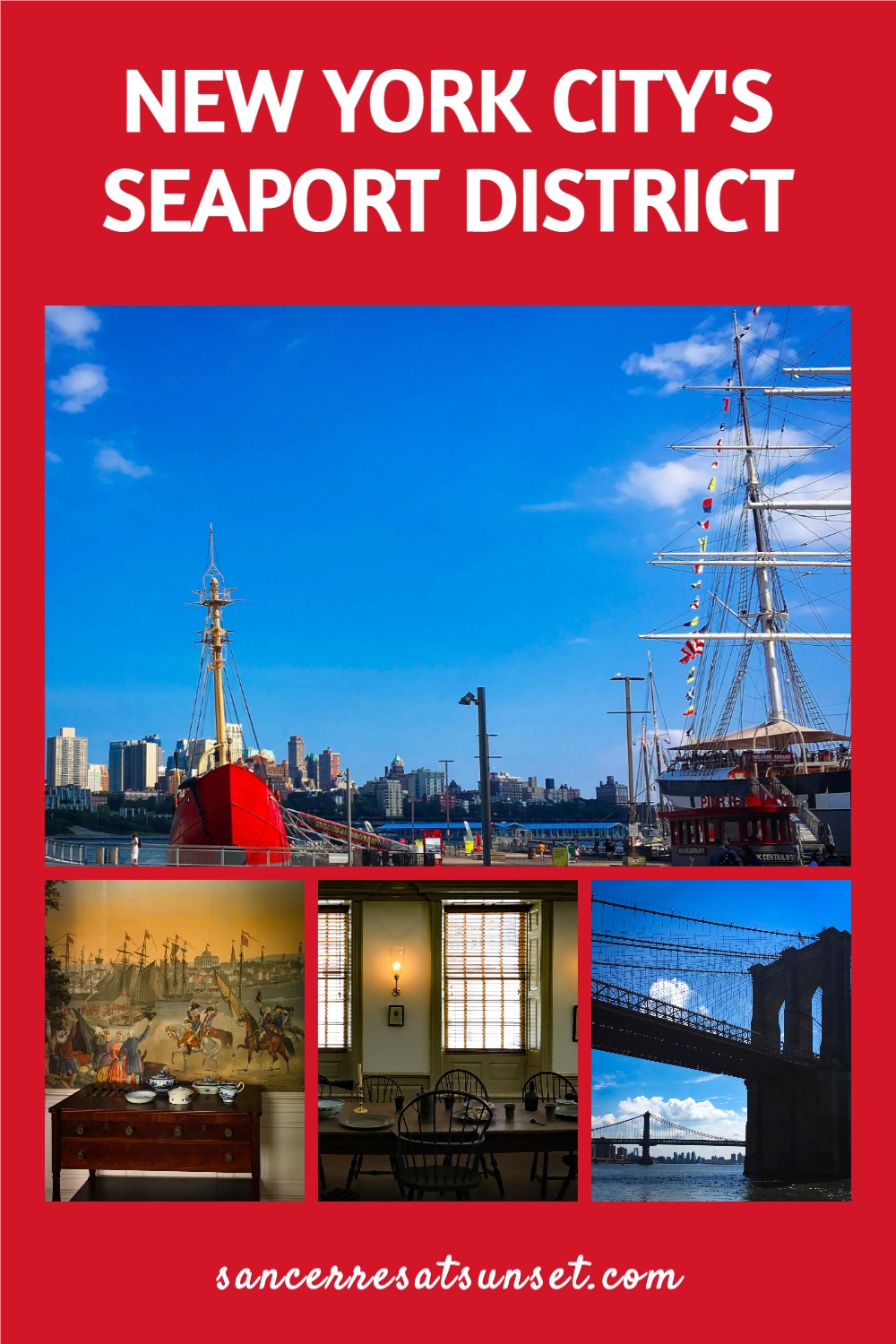 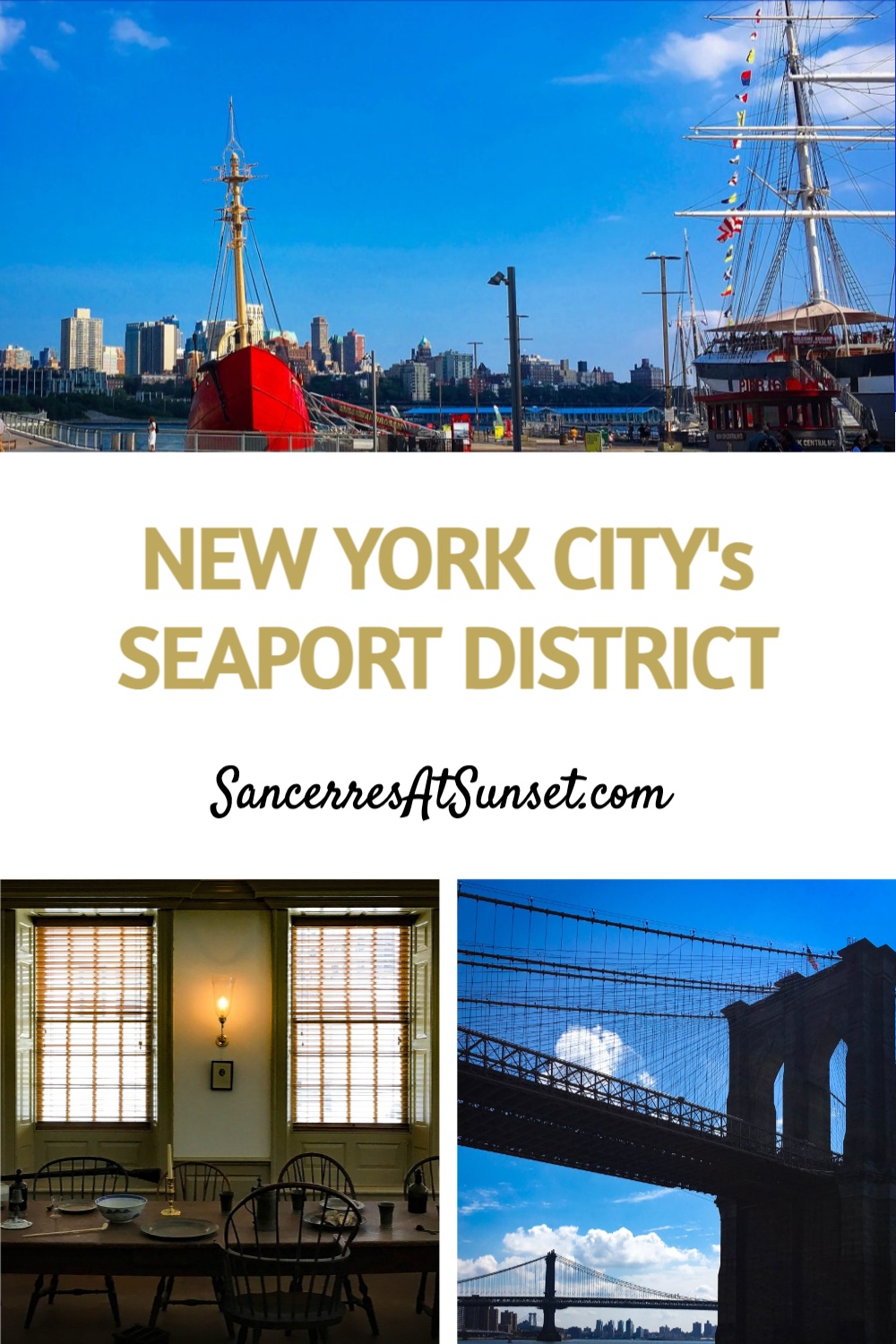