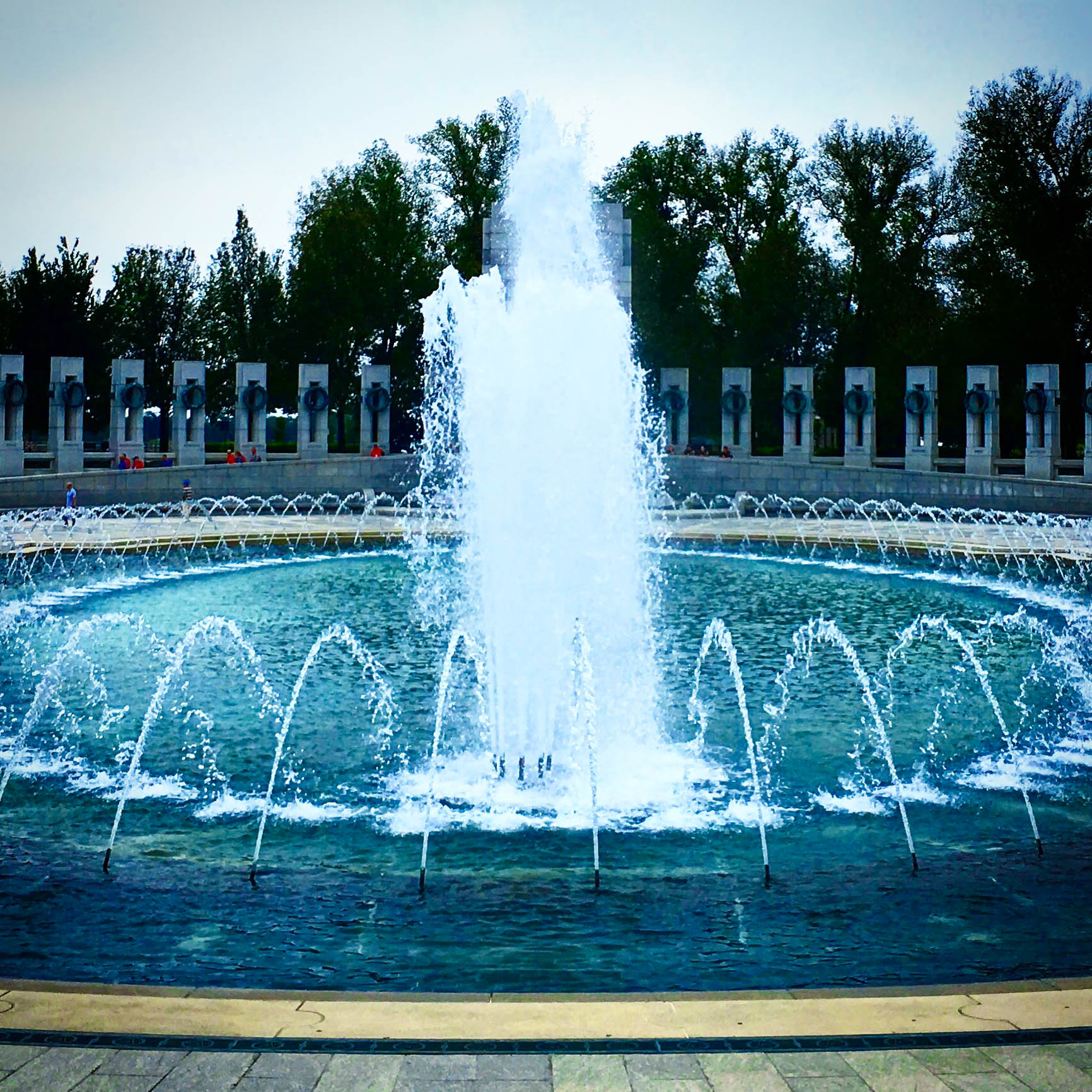 KILROY WAS HERE  The phrase appeared on ships, aircraft, buildings, wherever American servicemen went during World War II.  Usually accompanied by a minimalist drawing of a bald-headed, long-nosed character peering over a wall, the graffito went viral before anyone knew the term.  Its origins are uncertain, but a popular legend centers around a Quincy-based ship inspector named James Kilroy, who would scrawl the message as his personal O.K. on hulls and tanks.

However it began, the simple slogan was an important morale-booster.  Servicemen far from home, lonely and afraid, would encounter it in hidden places, and know that another American had been where they now were.  It built a sense of connection and provided much-needed encouragement.  Probably now the most famous graffito in history, the phrase still echoes occasionally in popular and private culture, popping up everywhere from a Styx album to Seinfeld‘s refrigerator.  Years ago, I was part of a group of friends who gathered monthly to play Risk at the home of the biggest WWII buff I’ve ever known; for his birthday, I wrote “Kilroy was here” in frosting on his cake.

More significantly, the phrase is engraved in two hidden corners of the World War II Memorial in Washington, D.C., a warm wink to “the greatest generation” amid the grey granite.

Like the war it commemorates, the World War II memorial is sprawling and can be hard to grasp.  Unlike the U.S.S. Arizona Memorial at Pearl Harbor, for example, it has the awesome duty of reverencing not a single atrocity but a years-long, multi-front struggle.  Its twin arches, marked “Atlantic” and “Pacific”, represent the two main theaters where the War was fought.  Fifty-six pillars stand for the U.S. states and territories at the time.  Twelve bronze bas reliefs depict images of life at war, from scenes of troops landing on beaches to families dancing in the streets at home, celebrating victory.  The Freedom Wall bears 4,048 gold stars, each representing 100 American deaths.  In the center of the Memorial’s elliptical plaza is the Rainbow Pool, its twin fountains surrounded by smooth water jets. 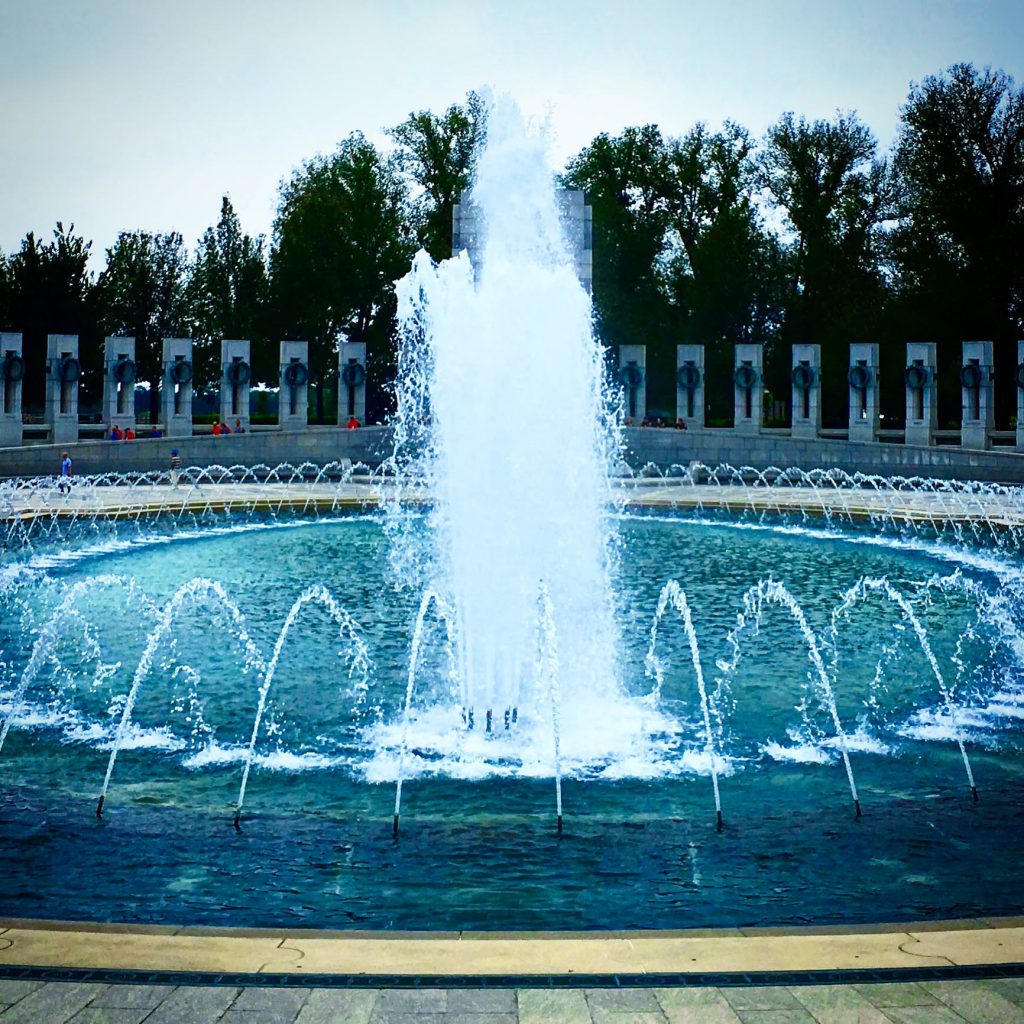 Like all historic memorials, it’s an important one.  Memorials honor those who sacrificed for a cause greater than themselves, and draw visitors out of themselves and into that cause.  They express gratitude.  They inspire and encourage.  They put our petty quotidian concerns in their place.  They remind us that America has always been great, because America is good, and a force for good. 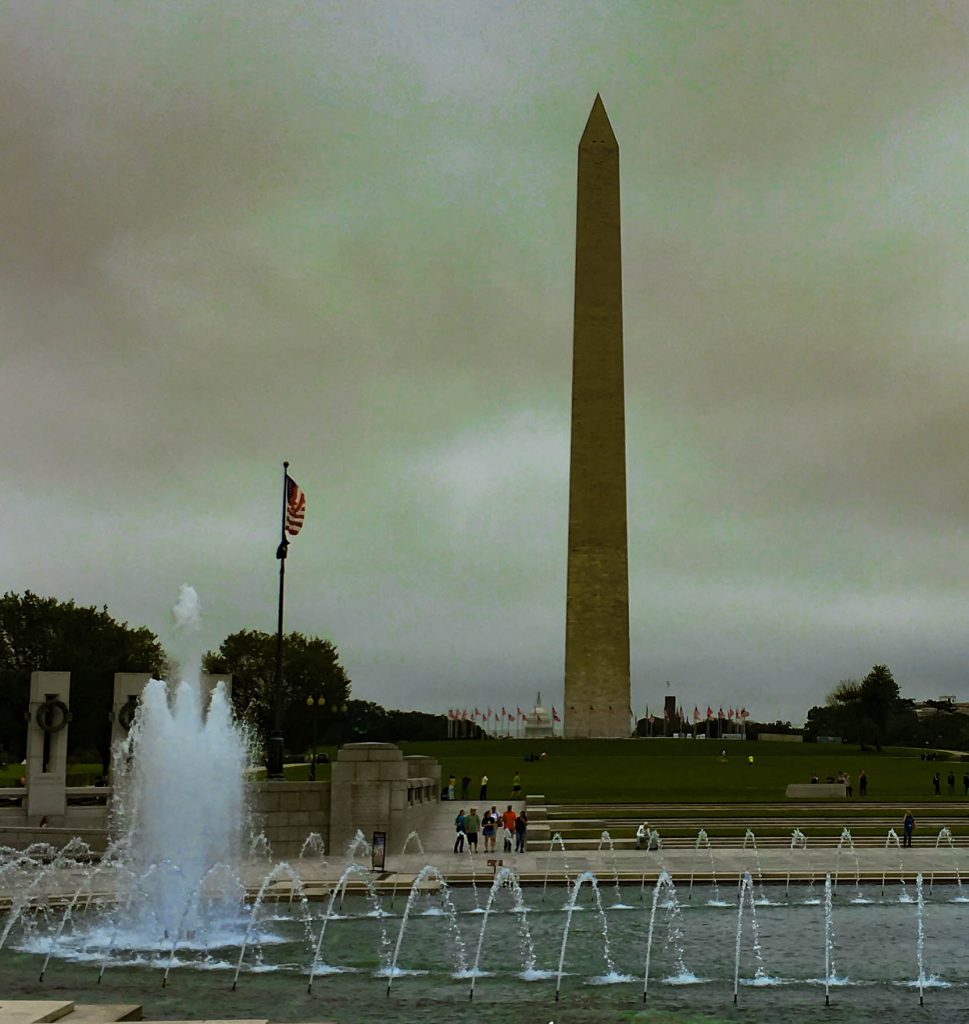 I visited the World War II Memorial on a recent morning as grey as the granite.  I was fortunate enough to come upon an Honor Flight ceremony.  The Honor Flight Network is a non-profit organization that transports veterans from around the country to Washington, D.C., so that they can visit the memorials to the wars in which they defended America, and connect with others who did the same.  Veterans from all wars are welcome, but priority is given to WWII servicemen and others with terminal illnesses.  The trips are free to veterans, and volunteers called “guardians” travel along to assist them.

Before their free time to explore the Memorial, and search for Kilroy, the veterans assembled in front of the Rainbow Pool, with the Lincoln Memorial in the background.  They sported matching red Honor Flight tee-shirts, and many wore caps noting their individual service.  Most stood, but several were in wheelchairs.  To their right, a wreath and a wheelchair carrying a single rose represented those who would never make the trip.  Four local Young Marines presented the colors before the playing of the Star-Spangled Banner. 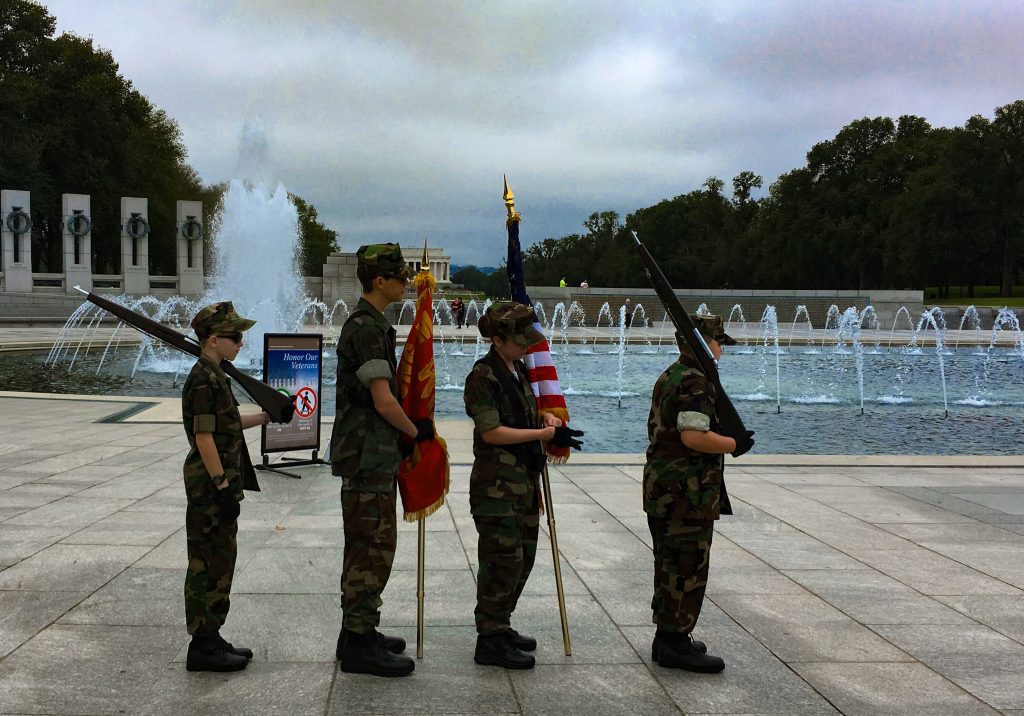 I stood back, behind the guardians, hand over heart, softly singing along, and the meaning of the Memorial came alive.  I was there to honor not a war but a great nation and the generation that fought for her and the goodness for which she stands.  As they sang our magnificent anthem to an even earlier victory, the veterans’ mottled skin and hunched shoulders proclaimed both the awfulness and the awesomeness of their struggle and sacrifice.  They were the real World War II Memorial.  They were there.

The World War II Memorial is located at 1750 Independence Avenue, SW, on the National Mall, between the Washington Monument and the Reflecting Pool. The closest Metro stop is Smithsonian, on the orange and blue lines.

The Memorial is open 24/7, unless closed in a fit of presidential petulance. It is especially pretty at dawn and at twilight. The Rainbow Pool is winterized during approximately December-March, depending on the temperatures. Plan on spending about 30 minutes, longer if you want to search for Kilroy. Do NOT wade in the Rainbow Pool To learn more about World War II, Ken Burns offers this reading list. 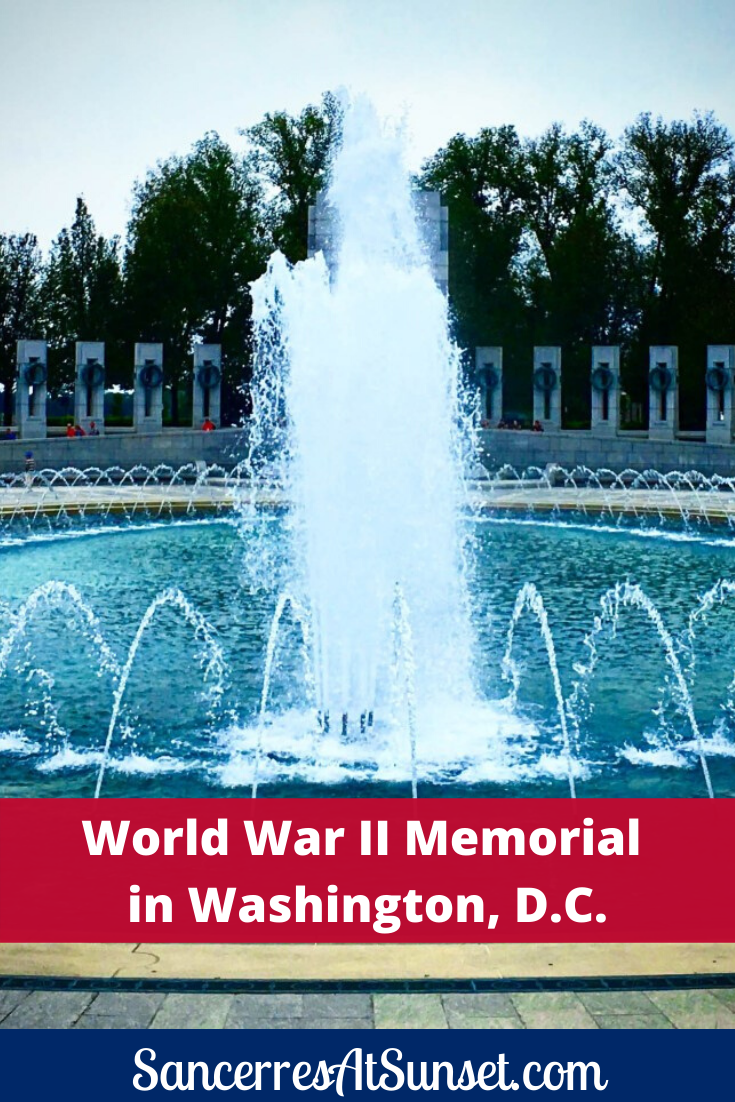 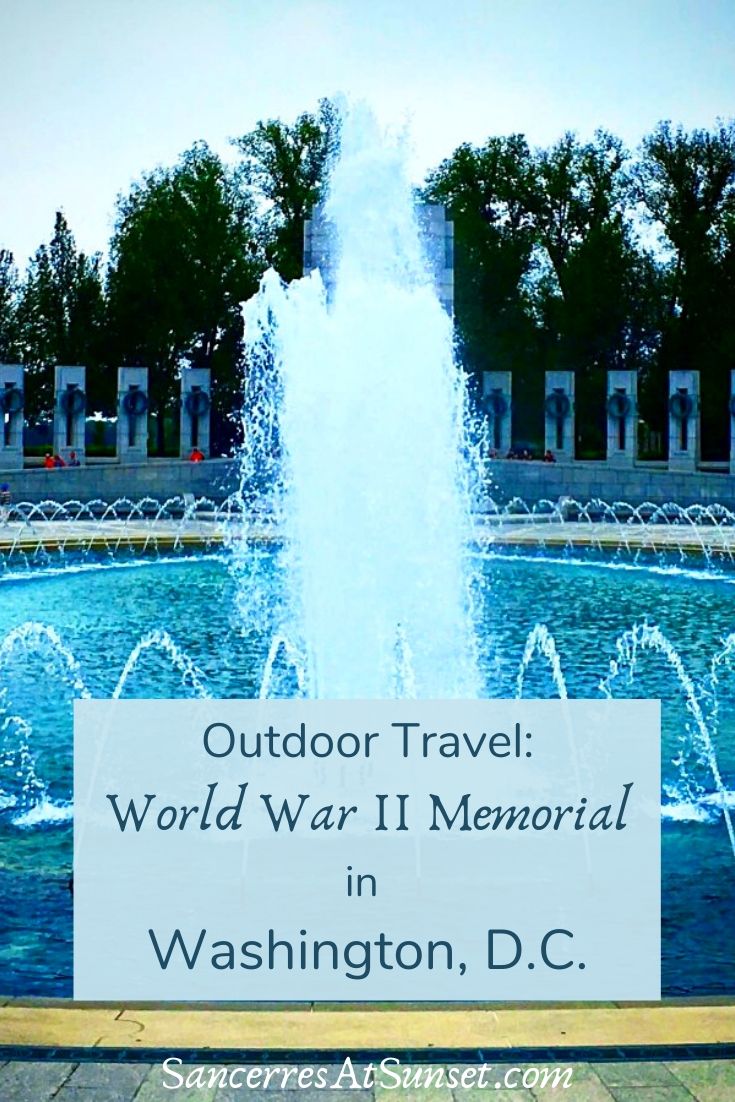 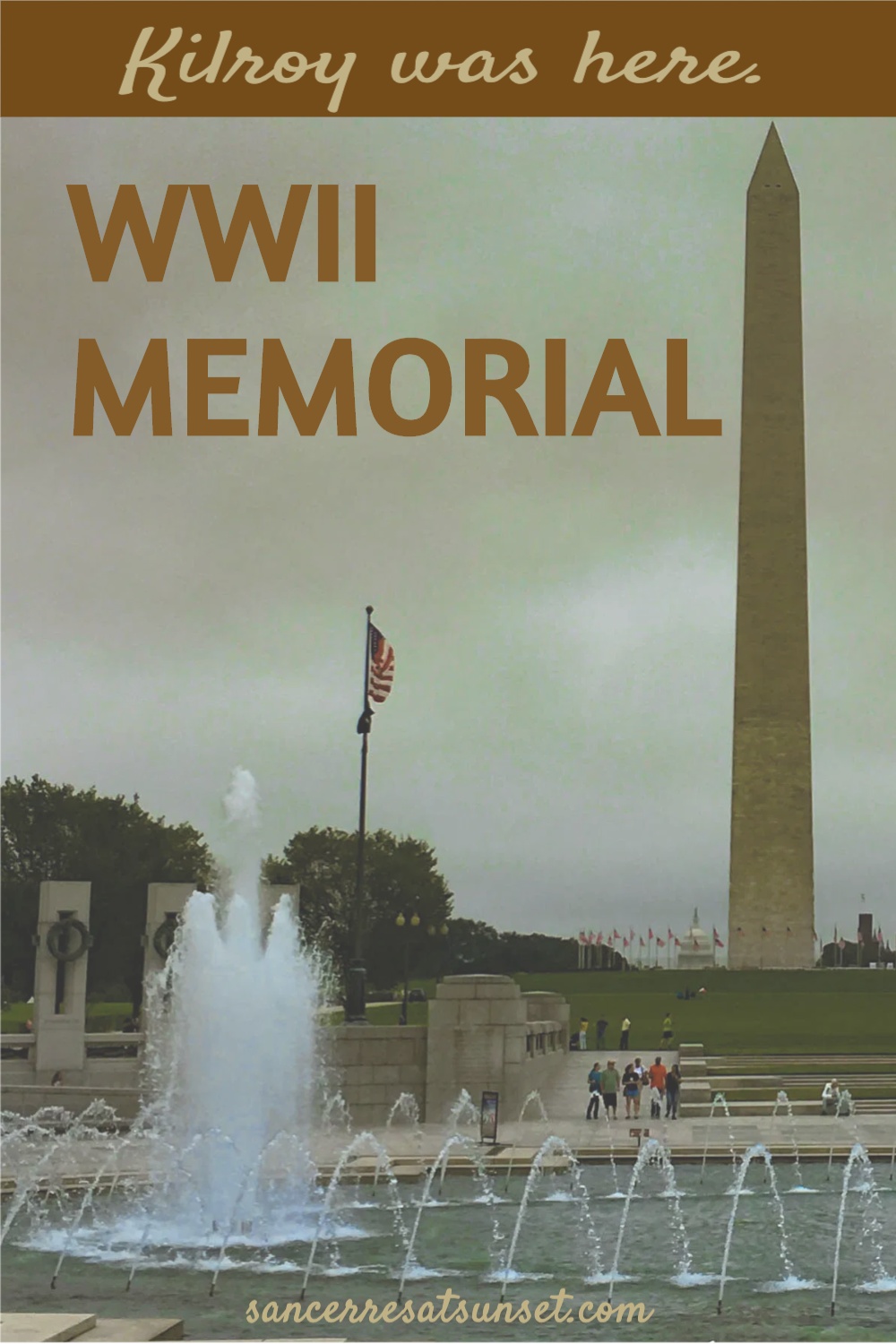 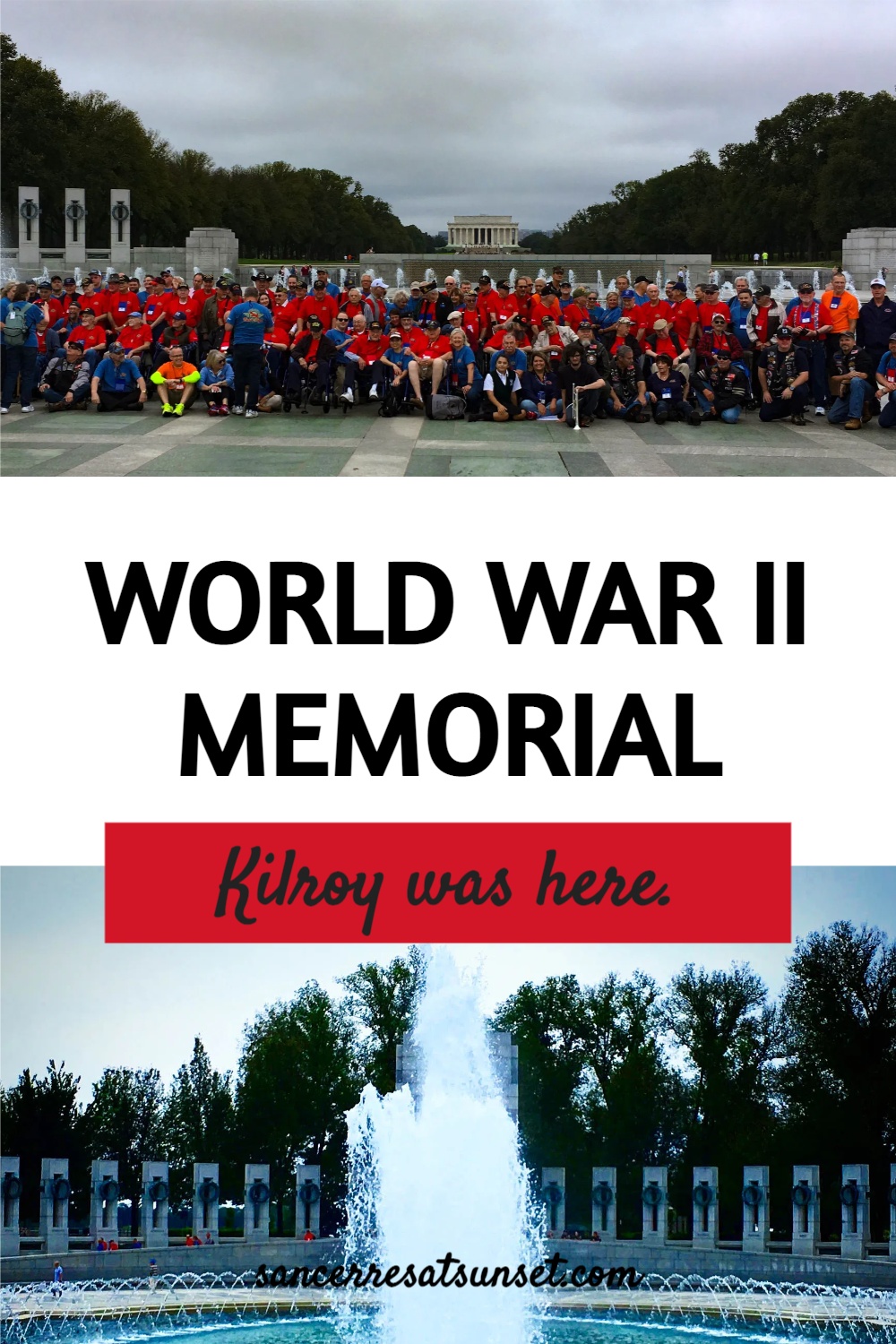