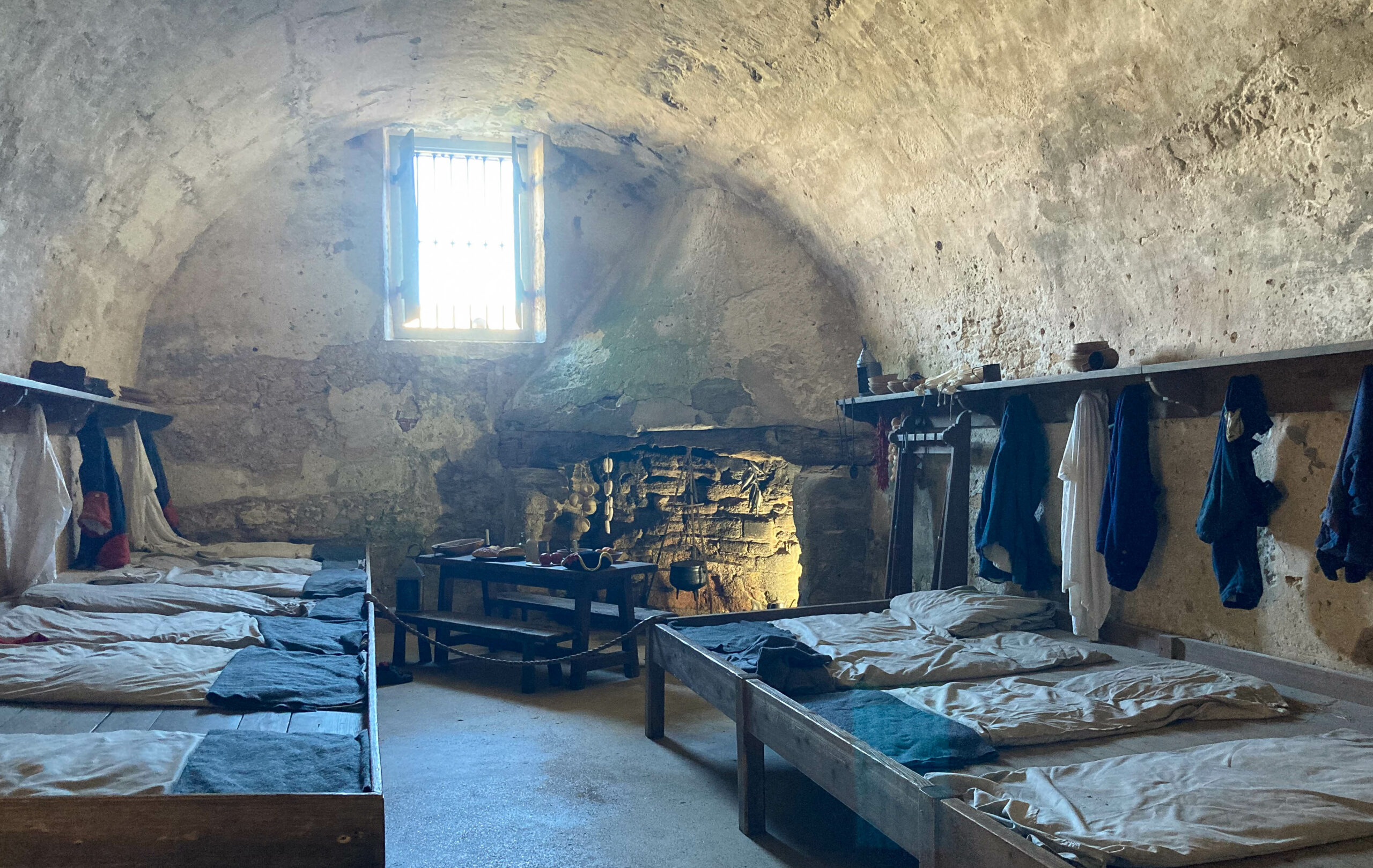 Florida boasts unique history.  And Saint Augustine’s Castillo de San Marcos reflects much of the originally Spanish colony’s uniqueness.  It is the oldest masonry fort in the continental United States.  It has witnessed centuries of political and cultural conflict.  And it was built with a rare seashell-limestone that can alternately absorb and deflect cannonballs.

Founded in 1565, Saint Augustine is the oldest European settlement in America.  For more than a century, it relied on wooden forts to shield it from military, pirate, and native attacks.  But they tended to burn down, rot away, or collapse in storms.

After a pirate attack in 1668 and the too-close-for-comfort British founding of Charleston in 1670, the colonials petitioned Spain’s Queen Regent Mariana for funds to build a sturdier stone structure.  She agreed.

Construction began in 1672 and finished in 1695.  Castillo de San Marcos is the largest Spanish fortress ever built in North America and has a distinctive shape.  Its square base features four arrow-shaped bastions that jut from its corners, enabling a 360-degree view and creating a powerful platform from which to mount an artillery defense. 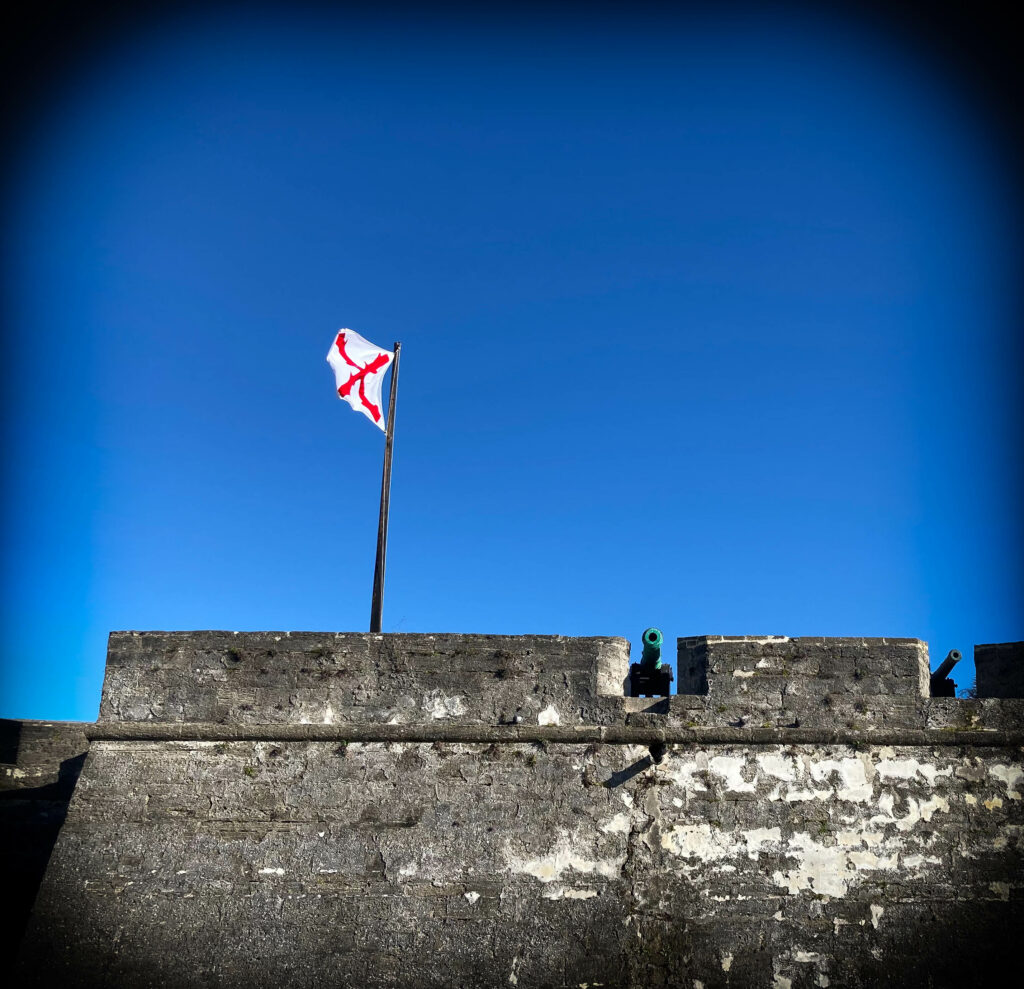 But even more distinctive is the limestone used to build the Castillo’s walls, which average 12 feet thick.  The Spanish called the stone coquina, which is the word for a type of shellfish.  It is a sedimentary rock that forms when calcium carbonate binds together seashell fragments.  Laborers mined it from nearby Anastasia Island, transported it by barge to St. Augustine, and used it to build the Castillo.  The stone is highly porous, which makes it exceptionally resilient.

Today the Castillo is a National Monument maintained by the U.S. National Park Service.  Visitors cross a drawbridge to enter via a sally port.  The upper gun deck still holds cannons and offers spectacular views all around.  To the east is the mouth of the inlet to the Atlantic Ocean.  To the south is the Bridge of Lions and a marina.  To the west sits Old Town, with its soaring architectural spires.  To the north are the Matanzas River and an estuary.  The sea breeze blows, and there’s no bad view. 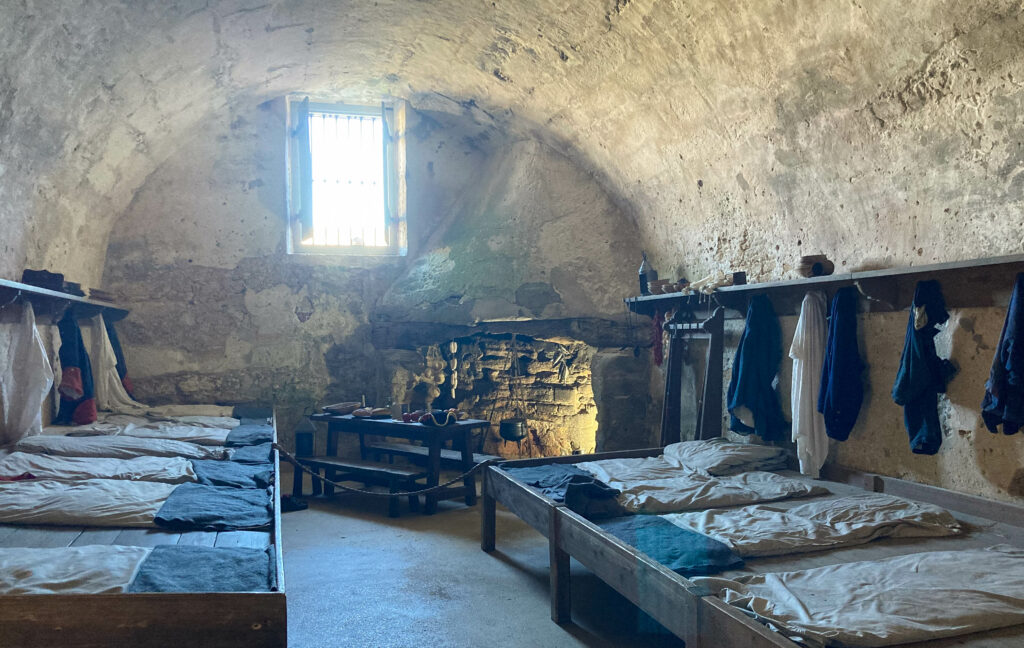 On the lower level, you can explore the soldiers’ quarters, with wooden beds, tables, and benches. 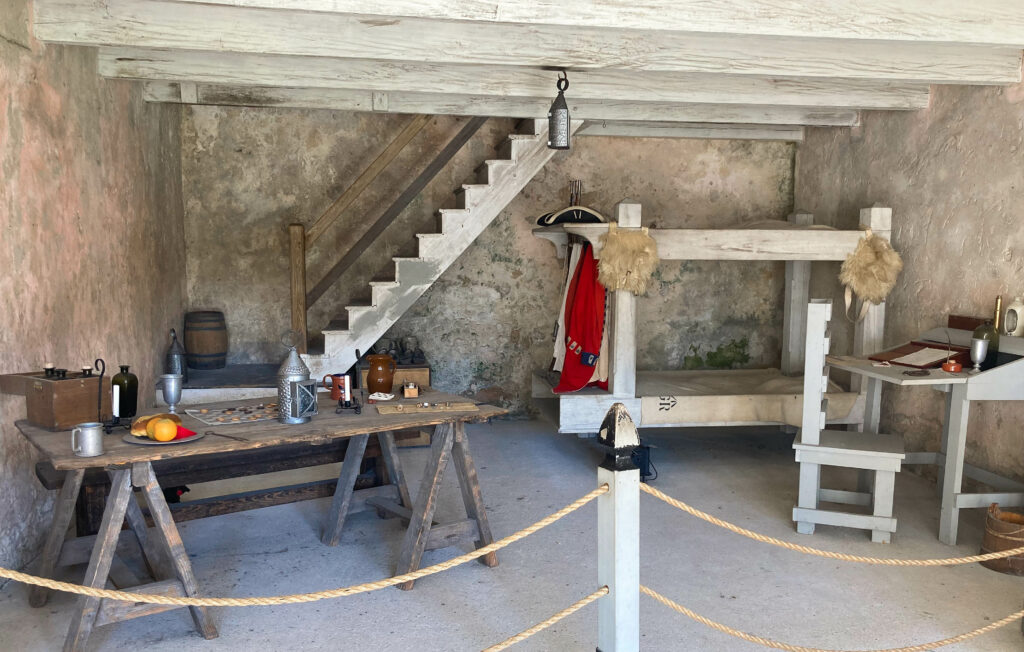 You can also see the storage rooms that held ammunition, gunpowder, tools, and foodstuffs. 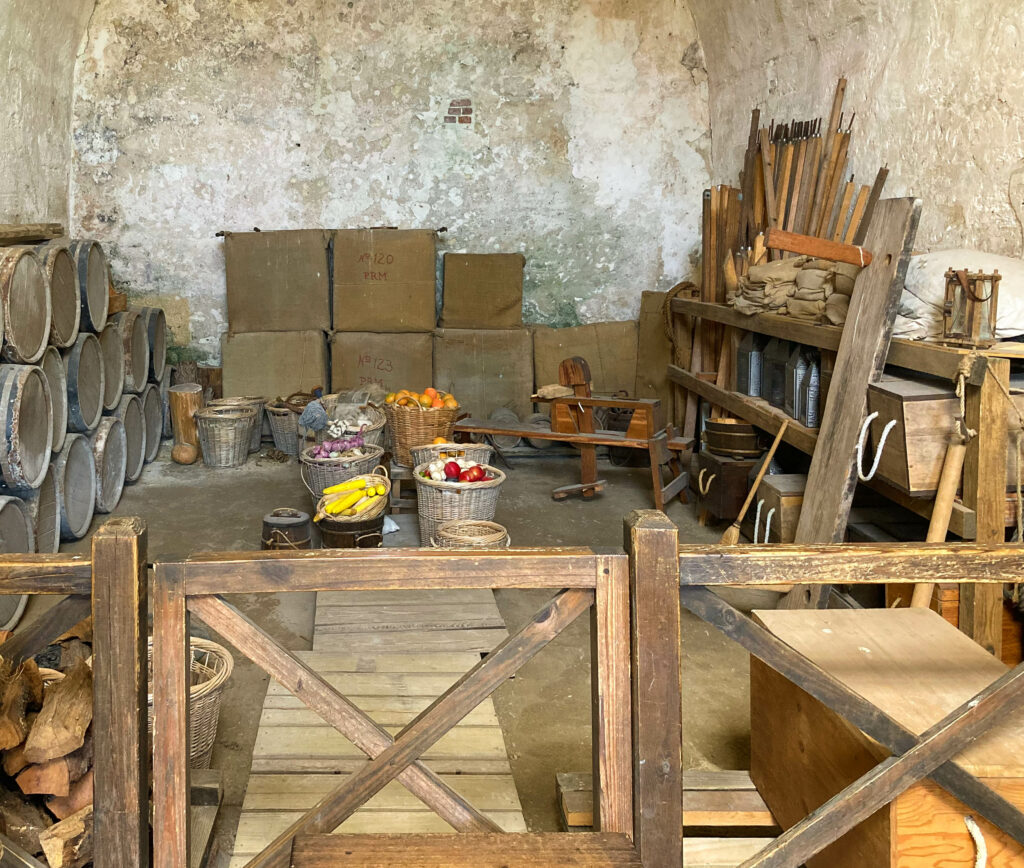 And there are lots of displays teaching the history of the Castillo, Saint Augustine, and Florida.

In 1702, during Queen Anne’s War, the British besieged St. Augustine.  Roughly 1,500 colonial soldiers and civilians packed into the Castillo for nearly two months until a Spanish fleet arrived to rescue them.  Outside, the British bombarded the fortress with cannon fire.  But the resilient walls never crumbled nor even cracked.  On the contrary, the cannonballs seemed to bounce off or lodge in the thick soft coquina walls, much to the bewilderment of the thwarted British.

1n 1740, during the War of Jenkins’ Ear, the British again besieged St. Augustine.  Roughly 1,600 soldiers and civilians packed into the Castillo for almost a month, until Spanish troops arrived.  The castle walls held again.

Spain sided with France in the last French and Indian War, which began in 1754.  After the War’s end, in 1763, under the Treaty of Paris, victorious Britain gained control of the colony.  They designated St. Augustine the capital and Anglicized the Castillo’s name into Fort St. Marks.  Spain kept the Louisiana Territory as a kind of consolation prize. 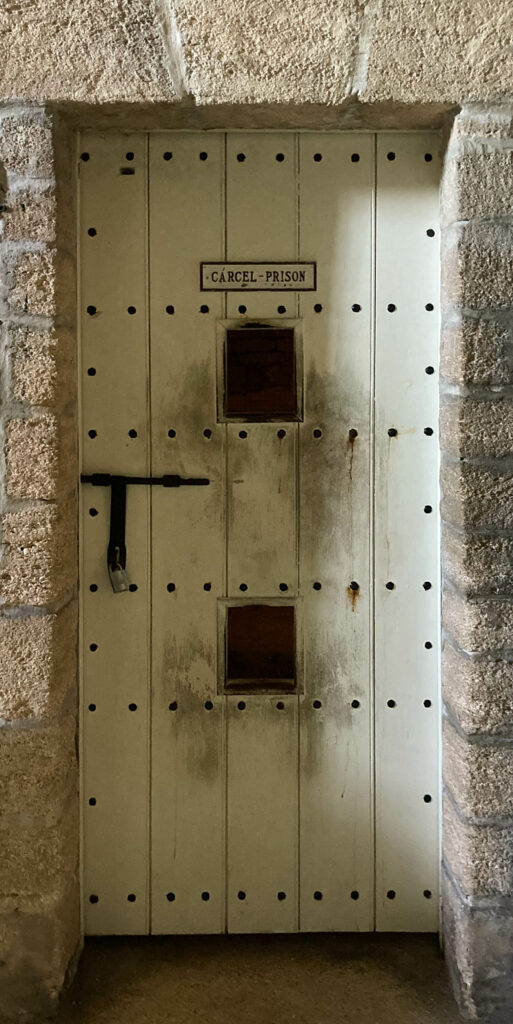 The Revolutionary War began in 1775; Spain allied with America in 1779.  The British held the Fort and used it as a prison for Continental soldiers.  South Carolina’s Lt. Governor Christopher Gadsden was held in the Fort’s jail for almost a year.  After that War’s end, in 1783, with a new and improved Treaty of Paris, America gave the colony back to Spain as a thank-you.  Spain restored the original name of Castillo de San Marcos.

So, thus far, we’ve seen Spain hold the Castillo against British assault thanks to shell-stone walls that alternately repel or absorb cannonballs, only to lose it via a diplomatic treaty, and then win it back for supporting an underdog who defeated the world’s most powerful empire.  What’s next?  A romantic triangle, of course.  In 1784, Colonel Garcia Marti commanded the Castillo.  According to legend, the Spanish officer’s wife Dolores wore a strong and distinctive perfume.  One day, Col. Marti’s subordinate Captain Manuel Abela reported for duty redolent of Señora Marti’s perfume.  In short order, Col. Marti sent his wife to live with an aunt in Mexico and dispatched Capt. Abela on a special mission to Cuba.  Or so he claimed.

And in 1819, the young nation obtained Florida.  America repurposed the Castillo as an Army base and renamed it Fort Marion, in honor of South Carolina’s Brigadier General Francis Marion, the Revolutionary War officer nicknamed the “Swamp Fox”.  Florida became a U.S. territory in 1821.

In 1833, a U.S. Army officer heard a strange hollow sound from behind one of the normally thick walls of Fort Marion.  He removed a coquina brick and was smacked in the nose by the smell of a strong perfume.  He had discovered a hidden chamber, with two skeletons chained to a wall.  According to legend, they were the remains of Señora Marti and Captain Abelo, chained up, sealed in, and left to die a horrifying death.

Two years later, the U.S. government sought to relocate Florida’s native Seminole population along part of the Trail of Tears to a reservation west of the Mississippi River.  The Seminoles fought back.  In 1837, U.S. Army General Thomas Jesup proposed a negotiation with Seminole leaders and warriors and their families at Fort Peyton, seven miles south of St. Augustine.  It was a trick.  More than 230 Seminole approached the Fort under a white flag.  U.S. soldiers surrounded, captured, and transferred the group to Fort Marion, where most remained imprisoned for two months, after which they were moved to Fort Moultrie in Charleston.  But about 20 escaped.  Even today, no one is sure how they got out, but most of Florida’s surviving Seminole trace their lineage back to the escapees.

Florida joined the union as a slave state in 1845.  It seceded and joined the Confederate States of America in 1861.  The Yankees retook Fort Marion in 1862 and used it as a prison for Confederate soldiers.  Florida was restored into the United States in 1865 at the end of the Civil War.

Tragically, the Army once again used the Fort as a prison to hold native Indians during the latter part of the 19th century, including at one time about 500 Apache loyal to Geronimo.  In 1898, Fort Marion became a prison for deserters in the months-long Spanish-American War, which ended with yet another Treaty of Paris.  Fort Marion fell into disuse soon after.

The Army decommissioned Fort Marion in 1933 and turned it over to the National Park Service.  Congress restored its original name of Castillo de San Marcos in 1942.

What to Know before You Go to Castillo de San Marcos

Castillo de San Marcos is located at 11 South Castillo Drive, Saint Augustine, Florida.  The Castillo is within walking distance of the city center.  It also has a Trolley stop.  And there is a nearby paid parking lot.

Given its location on the waterfront, the Castillo runs a little cooler than the city center.  Take along a light windbreaker if you expect cold or wet weather.  Wear dark sneakers or other comfortable, closed-toe shoes you don’t mind getting dirty.  (And think twice about your perfume.)

Allow 1 to 3 hours.  Castillo de San Marcos is a great place to explore if you like early American history, waterfront scenery, or unique architecture with rare walls that absorb and deflect cannonballs.

To book a room at my hotel of choice in Saint Augustine, the historic Casa Monica, click here. 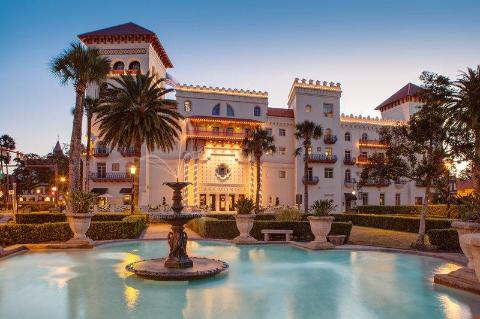 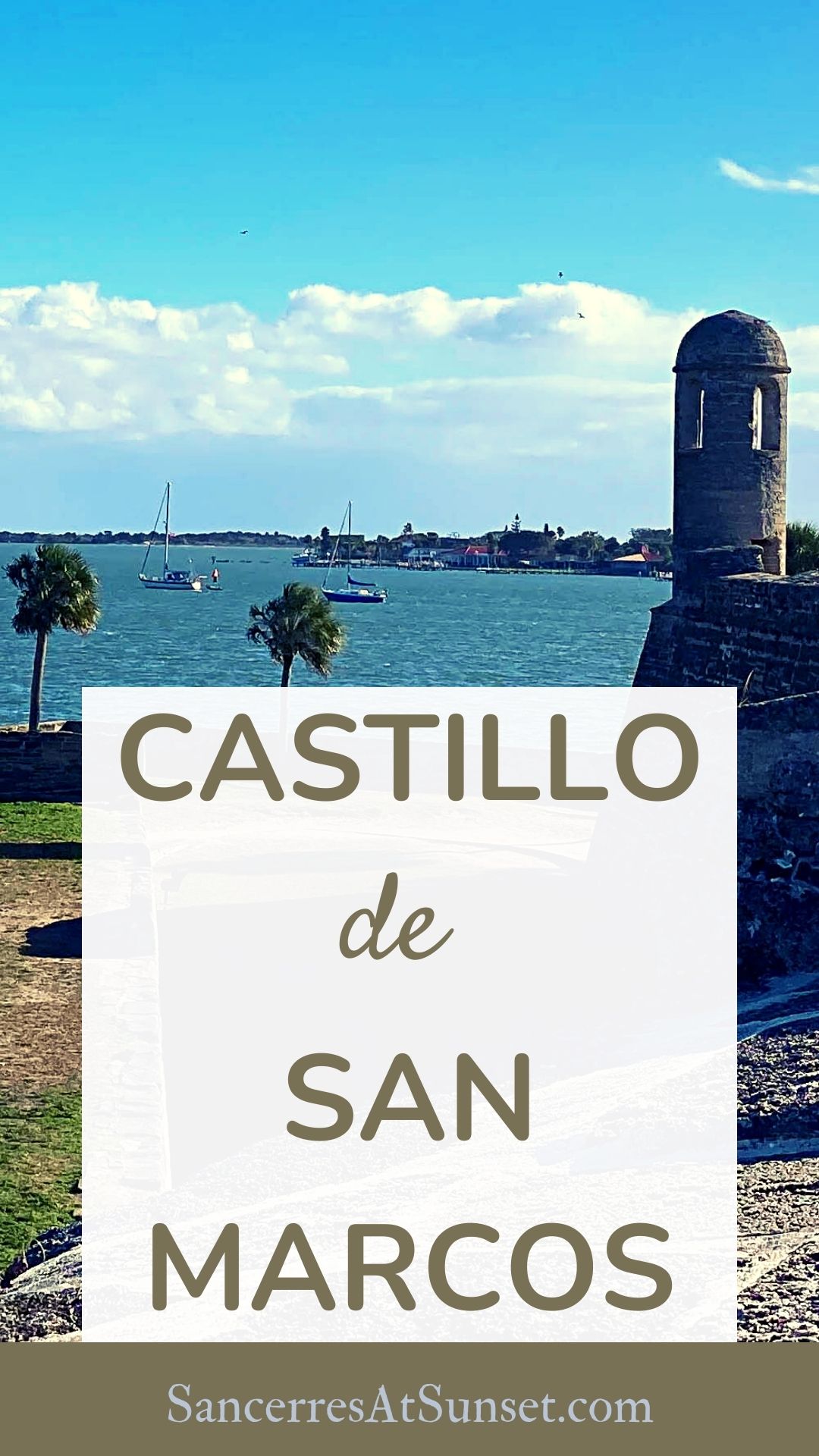