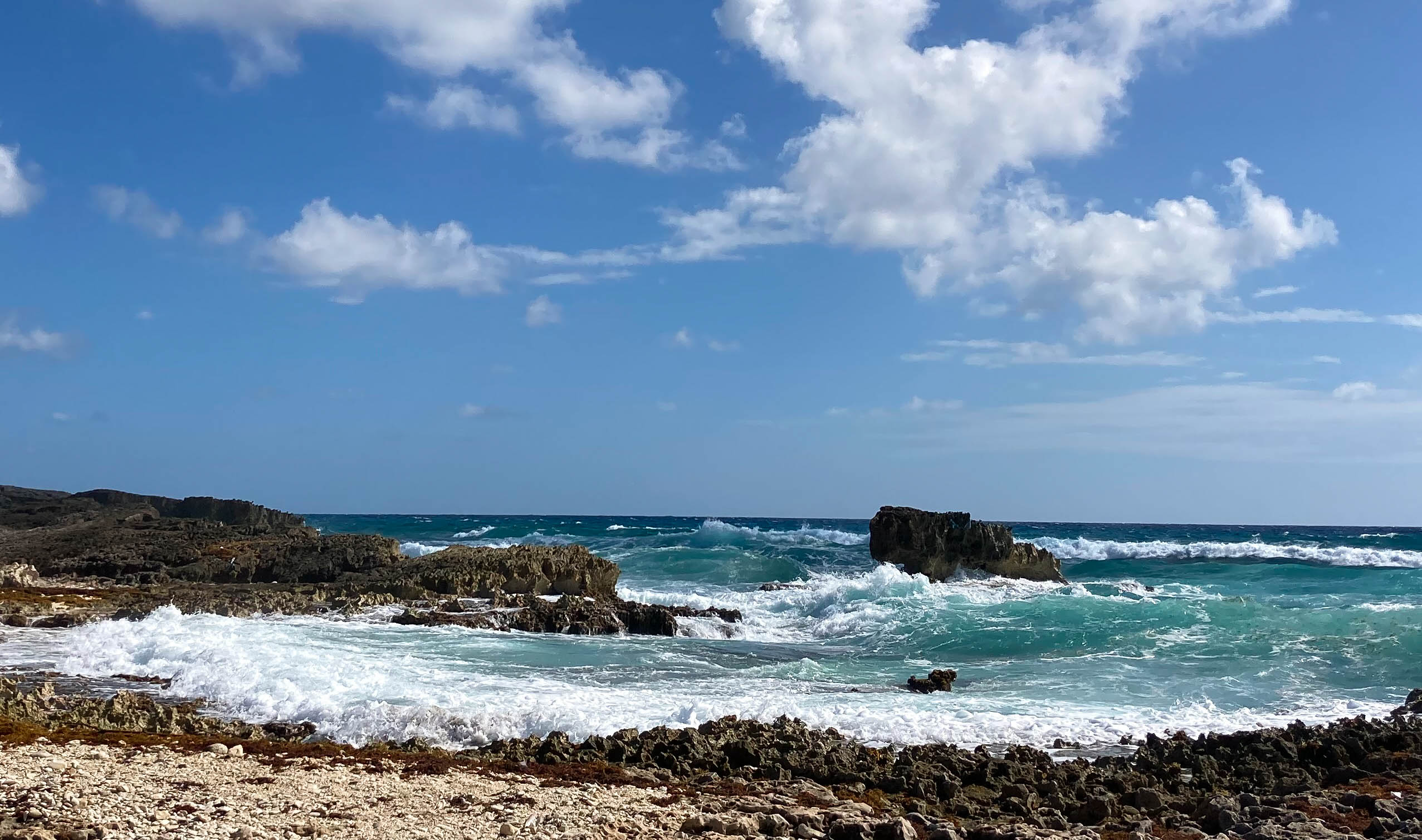 The surf splashed up in jagged clouds of white as it pounded the black shoreline.  Birds soared above.  I tried to keep my balance as I climbed along the rough rocks.  Behind me, small huts boasted Mexican snacks, cold drinks in coconut shells, and rope swings.  Cozumel is both raw and resort-y.

Cozumel is a Caribbean island off Mexico’s Yucatan Peninsula.  Its main city is San Miguel, and undeveloped forest covers much of the island.  Historians believe that the Mayan people settled Cozumel around 2,000 years ago.

Today Cozumel is the most popular port of call for premium cruisers, according to the cruising Web site CruiseCompete, and the small island boasts three cruise piers.  Visitors can explore a range of things from beach clubs to Mayan ruins.

My family opted for a “Cozumel Highlights” shore excursion during our recent Caribbean cruise.  Our ship docked at Puerta Maya on the tamed western side of the island.  We walked through a duty-free shop that covers the land end of the pier to meet our tour guide and board a bus for a half-day adventure.

Our first stop was the Mayan Cacao Company, where we gathered in a small courtyard under the watchful eyes of a magnificent scarlet macaw. 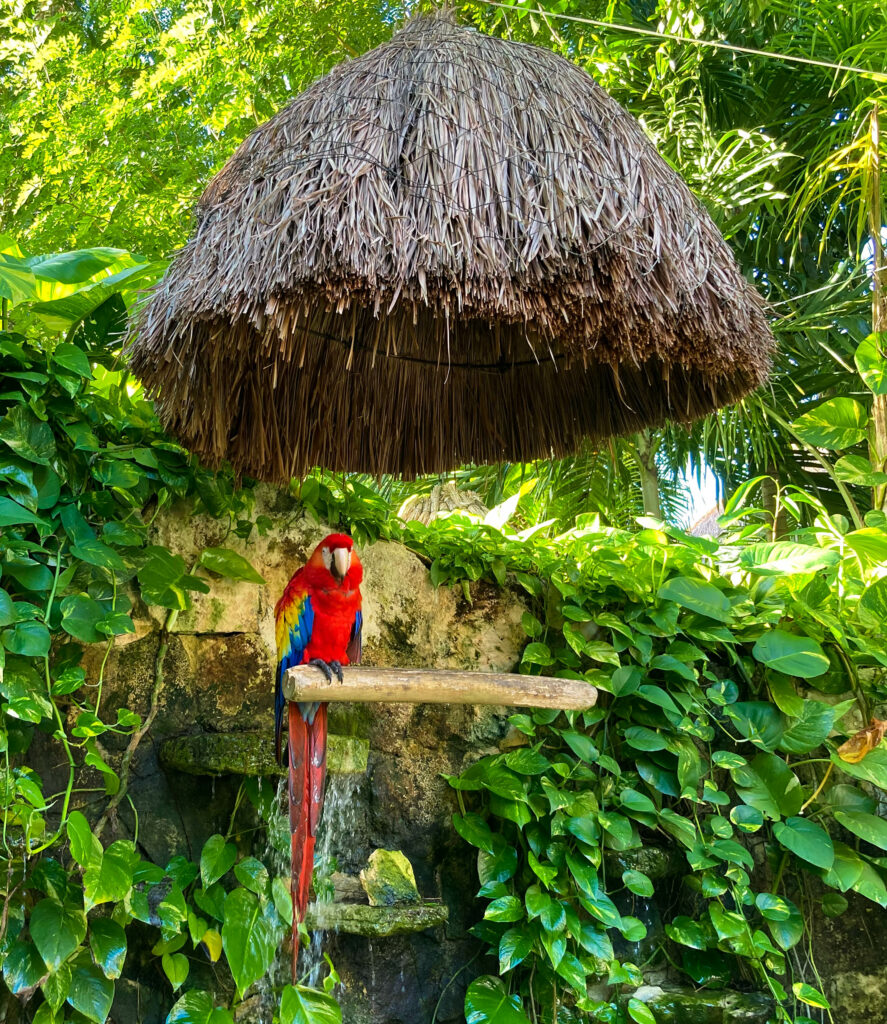 We proceeded into a small wooden hut with displays teaching the significance of cocoa beans in Mayan culture.  Ancient Mayans used the beans as currency–and discovered how to refine them into chocolate.

Then we headed back outdoors for a treat of fresh tortillas with mole sauce.  Mole is a spicy chocolate-based sauce used in many Mexican dishes.  The mole was tasty, but I thought the small tortilla was even better–hot and slightly chewy and a teensy bit moist. 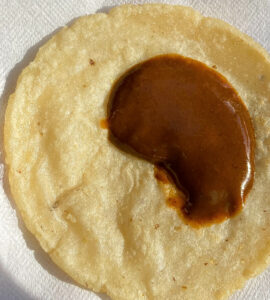 Next, we entered a small auditorium, accepted chocolate samples on wooden spoons, and settled into seats for a demonstration.  The presenter pulverized the roasted cacao beans with a limestone mortar and pestle, adding a little water to make the paste that the next tour group would sample.  Other ingredients that can be added include allspice, cinnamon, paprika, sugar, honey, and vanilla.  The result was thick and rich and somewhat bitter.

Then we headed upstairs for a tequila tasting.  Tequila was first distilled from the blue agave plant in Mexico (though not on Cozumel).  It has a distinctive flavor that is both smooth and earthy.

Next we crossed over to Cozumel’s rugged east coast.  This is the side of the island that faces the Caribbean Sea, so it’s much less sheltered than the west coast.  El Mirador is a spectacular spot.  The pounding surf carves hollows in the rough rock, as it bursts high in frothy spouts and swirls low in foamy whirlpools.

The beach is unsafe for swimming, and a little treacherous for climbing, though it was worth it.  It’s a popular point, so there are several bars and snack and souvenir shops.  But I’d recommend holding off on consuming anything until after you’ve finished exploring.

From there we headed into the jungle.  Our visit to the Mayan Bee Sanctuary began with a ritual performed by a Mayan shaman.  Then we followed a limestone path through lush greenery with an earthy floral aroma.  We passed a small cenote, which is a sinkhole that forms when limestone bedrock collapses and exposes groundwater.  The Yucatan Peninsula is a limestone plain and hosts approximately 6,000 of these natural sinkholes.  Cenotes were the only source of water in the jungle for the Mayans, who believe them to be sacred. 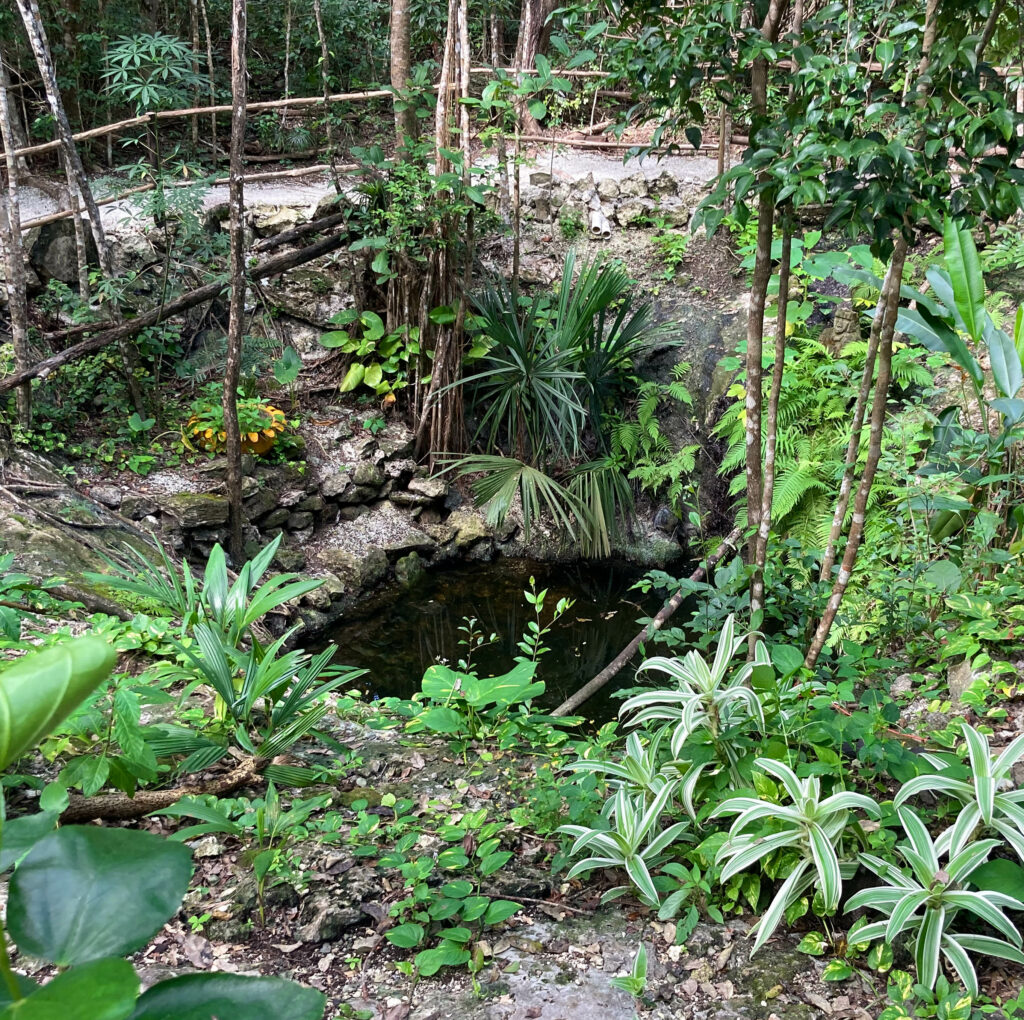 Cenotes also provided water for Mexico’s Melipona bees, whose thin honey the Mayans have cultivated for millennia.  Mayans credit Melipona honey with a host of health benefits from wound healing to cough suppression.

Melipona bees differ from the Apis bees that produce most commercial honey:  They’re tiny–only about 7mm long.  And they don’t sting.  We stopped for a while to watch the cute little things buzz about the hollow logs where they build their hives.

Then it was on to a hut where we first received a taste of Apis honey and then Melipona.  The difference between the two was like the difference between fine champagne and box wine.  The Melipona honey was lighter, and it had a faint floral flavor that gave way to an acidic burst on the finish.  It tasted purer, finer, more delicate, and it lingered pleasantly on the palate.  I left ruined for grocery-store honey.

We hopped on the bus for the last leg of our adventure, back to Puerta Maya.  Carnival Cruise Line built the terminal for its own ships, including those of its subsidiaries, like Holland America.  It offers plenty of shopping, as well as restaurants and bars with names like Three Amigos.  A small “beach” area with white sand, palm trees, and lounge chairs faces the Cozumel Channel, which separates the island from mainland Mexico.  And then there’s Clear Lounge–the world’s first under-water oxygen bar, in which up to six visitors can frolic wearing only bathing suits and diving helmets, like marine creatures in a public aquarium in full view of passers-by.

We strolled back through the duty-free shop, with its chocolates and tequilas, and onto our waiting ship. 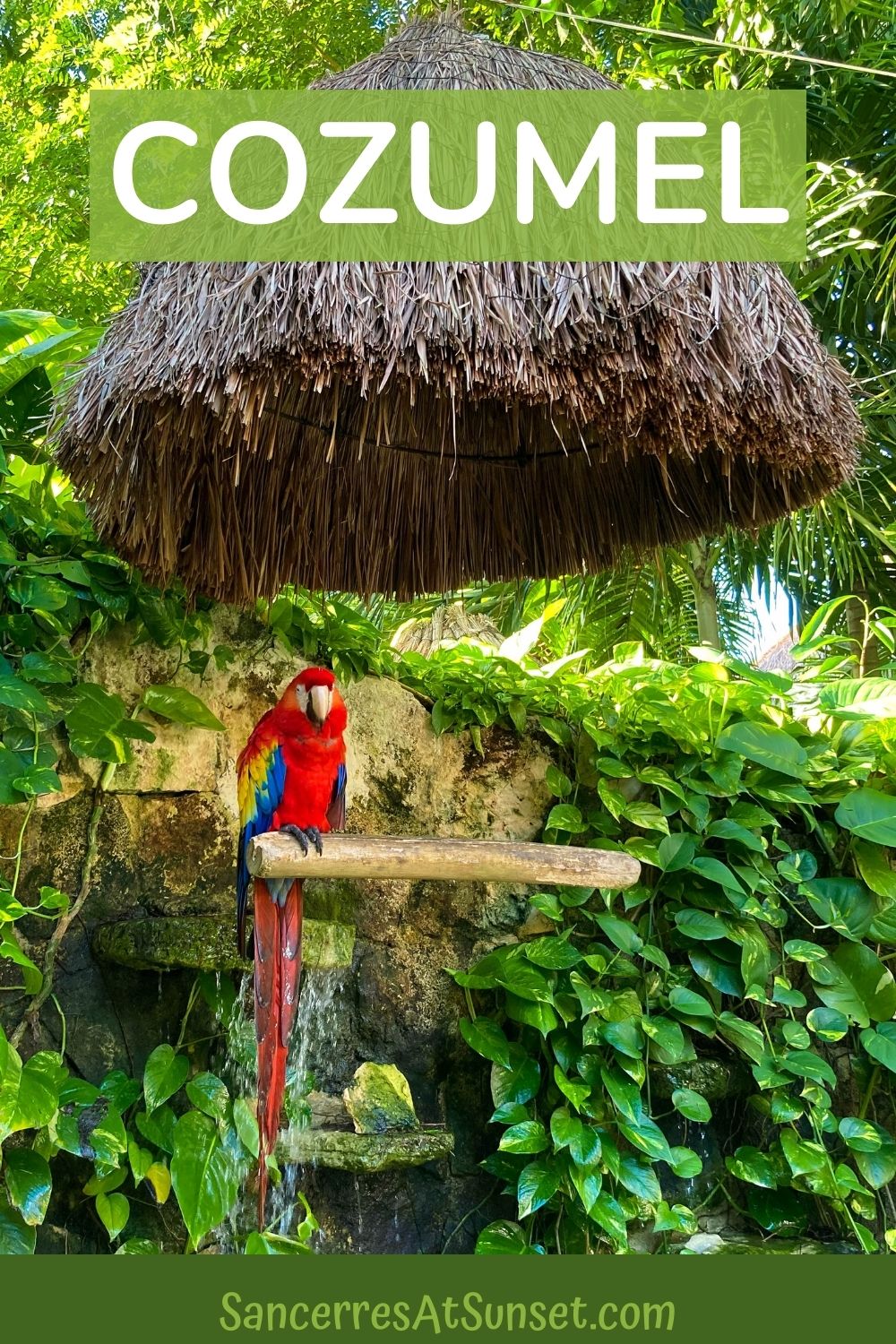