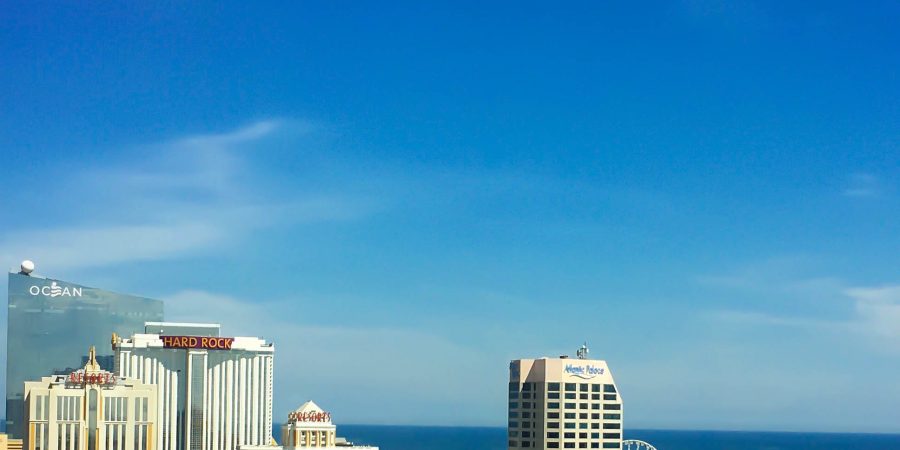 Two new casino hotels opened in Atlantic City this summer, and my travel companion and I decided it was time to check them out–especially after reading in Casino Player magazine that Ocean Resort Casino and Hard Rock Hotel & Casino were both offering status matches to players with preferred cards from other casinos.

We strolled to the north end of the Boardwalk to Ocean Resort, formerly the Revel Hotel, and signed up for its Ocean Premier program loyalty program, scoring $40 in free play with our preferred status in MGM’s Mlife and Caesars Total Rewards programs matched.  The 60-storey hotel is beautiful–bright and airy, with blue tones to match the ocean theme, lots of open space and light streaming through floor-to-ceiling windows, and fine service.  It features six pools and a sun deck with cabanas and views of the ocean and boardwalk.  Naturally we stopped in to the casino to take advantage of our free play.  There’s a solid selection of slots and video poker.  The cocktail waitresses came quickly and frequently.  But our favorite feature was the spaciousness; we never felt crowded.  We also stopped in to the gift shop, where my friend, who loves branded merch, bought a casino cap–and left behind a pair of sunglasses.  When I ran back to retrieve them, the pleasant shop employee remembered me right away; “They’re right here,” she said, handing them to me with a smile.

We headed over to Hard Rock, formerly the Trump Taj Mahal, where I’d stayed years ago in a suite with a deep soaking tub, a closed-off balcony, and a mirror on the bedroom ceiling.  We signed up for the Wild Card Rewards program, but were disappointed to discover that the generous status-match offer had ended two days earlier.  Oh, well, if we’d missed it we’d missed it.  But what really surprised us was the fact that there wasn’t even any free play for joining the program–and the exasperated attitude of the desk employee when we asked.  With wallets full of casino cards from Foxwoods to Vegas, neither of us could remember signing up for a program and not receiving at least a little free play.

We set off to explore the hotel.  A few things remained the same–like the reopened White House sub shop where I’d picked up the sandwiches that my companion and I snacked on while watching Barack Obama debate Mitt Romney on television in the sitting room of our spacious suite six years and a lifetime ago.  But of course the hotel was now tightly packed with intriguing music memorabilia, like Frank Sinatra‘s piano and Elvis Presley‘s stunning silver Rolls Royce.

Even more than casino merch, my friend loves casino buffets, so we stopped for lunch at the hotel’s Fresh Harvest.  The food selection was small and the quality spotty, but there were some very good items, and the service was the best we’ve had at a casino buffet.  The brisket from the carving station was moist and tender; the red beans were meaty and soulful, and the sticky toffee bread pudding was unfortunately fabulous–sweet, chewy, and melt-in-your-mouth comforting.  Throughout the meal, the warm and cheerful waiter quickly cleared our plates, refilled our sodas, and volunteered to bring us fresh coffee during dessert.

Two jaw-dropping things happened during lunch.  The first was that the older man at a nearby table took the entire two-foot whitefish from the smoked seafood station–and sat eating it with knife and fork, tail artfully flipped up toward the ceiling, head over the edge of the plate, eye wide and vacant as though even the fish couldn’t believe what was happening.

The other was that our phones buzzed–with emails from Hard Rock offering us the upgrade package we’d been snidely denied an hour earlier, including comped rooms, show tickets, and free play.  This taunting put us in no mood to play in the cramped casino or advertise the place by sporting its branded attire, so we headed back out to the Boardwalk after lunch.  I did tweet my disappointment; Hard Rock replied with a request that I message back with a copy of the email they’d sent, and I quickly complied.

By next evening, Hard Rock still hadn’t responded, and we decided to go back to Ocean for dinner.  We first stopped in to the spacious casino to play a while and enjoy our first drinks of the night comped.  Then we headed to the resort’s American Cut steak house for happy hour.  The bar was empty when we sat atop two comfy stools with a view of the ocean.  As we sipped our Sauvignon Blanc, the bartender served us a basket of bread–an inventive fusion of light layered biscuit and everything bagel, served with vegetable butter.  It was so irresistible that I broke my always-skip-the-rolls rule.  And I don’t regret it.

We were intrigued by the seafood tower, especially as the menu promised a “Whole Poached Lobster”.  But first we asked the bartender how big the lobster was.  She said it was just the tail and one claw.  We pointed out that the menu claimed it was whole.  She countered that it was a cold-water lobster that had only one claw.  Now, overall, the bar service was very good–attentive, quickly responding to requests, and cheerfully creating an enjoyable atmosphere, even while the stools filled up as the night lingered on.  But this was nonsense.  I grew up in New England; my family drove to Maine for lobster several times a summer.  There is no such thing as a lobster with one claw–unless it’s been tragically injured in some kind of bedrock brawl.  And there’s plenty of body and leg meat between the tail and the claws.

But we had our hearts set on seafood and ordered the tower anyway.  It was fabulous.  The jumbo lump crab meat was soft and flaky.  The tuna tartare was salty from the generous topping of roe.  The oysters, clams, and shrimp held their own.  As for the small bowl of lobster meat, it was sweet and perfectly poached. 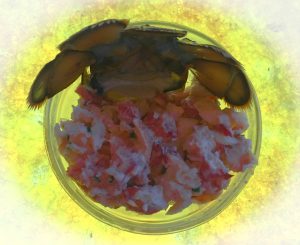 Perhaps we were a little too Meg Ryan in our enjoyment; our effusiveness inspired the newcomers on the next stools to order the same tower.

We lingered over nightcaps before heading back to the Boardwalk to stroll off some of the sensational meal, passing by Hard Rock along the way.  They never did respond to my message. 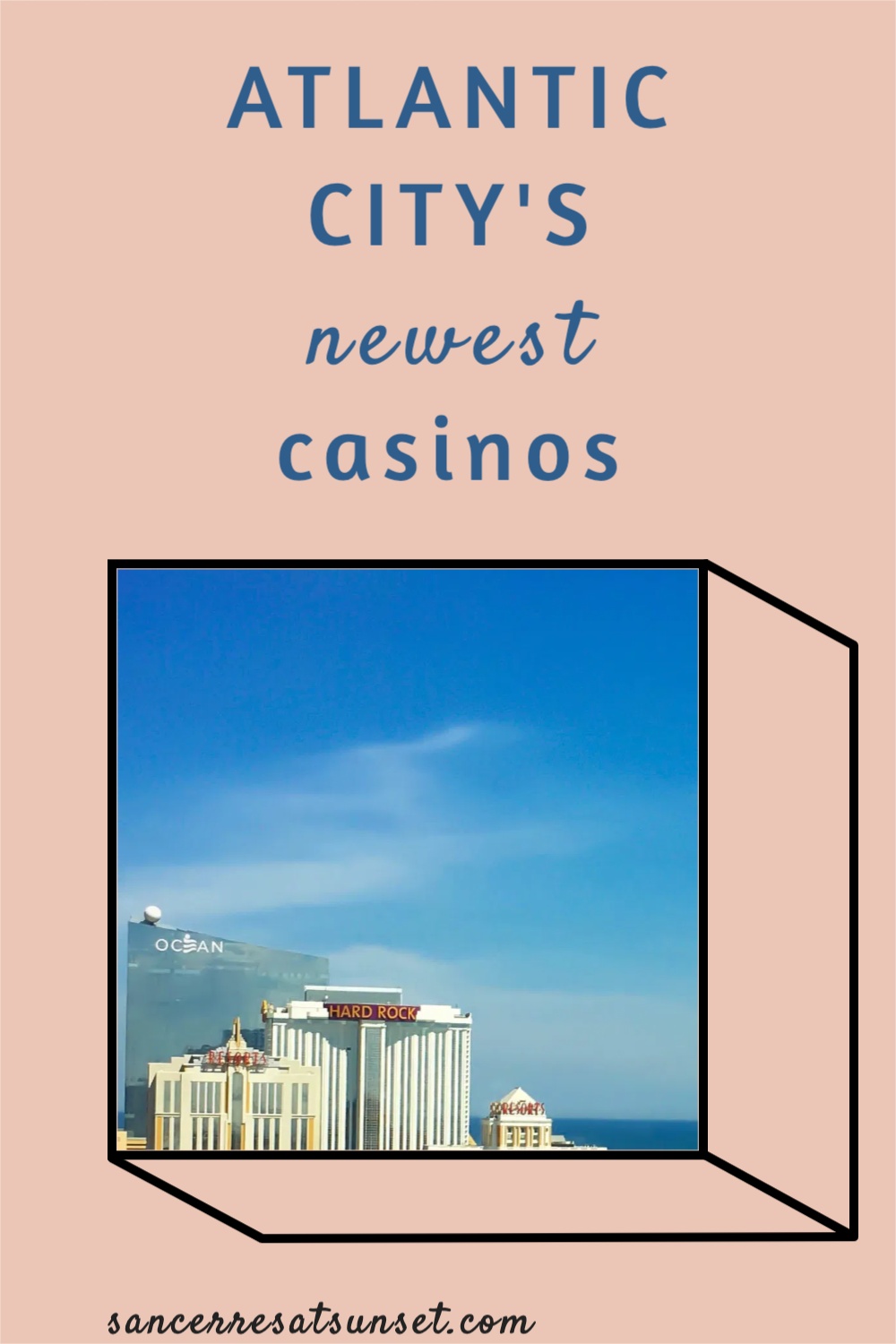 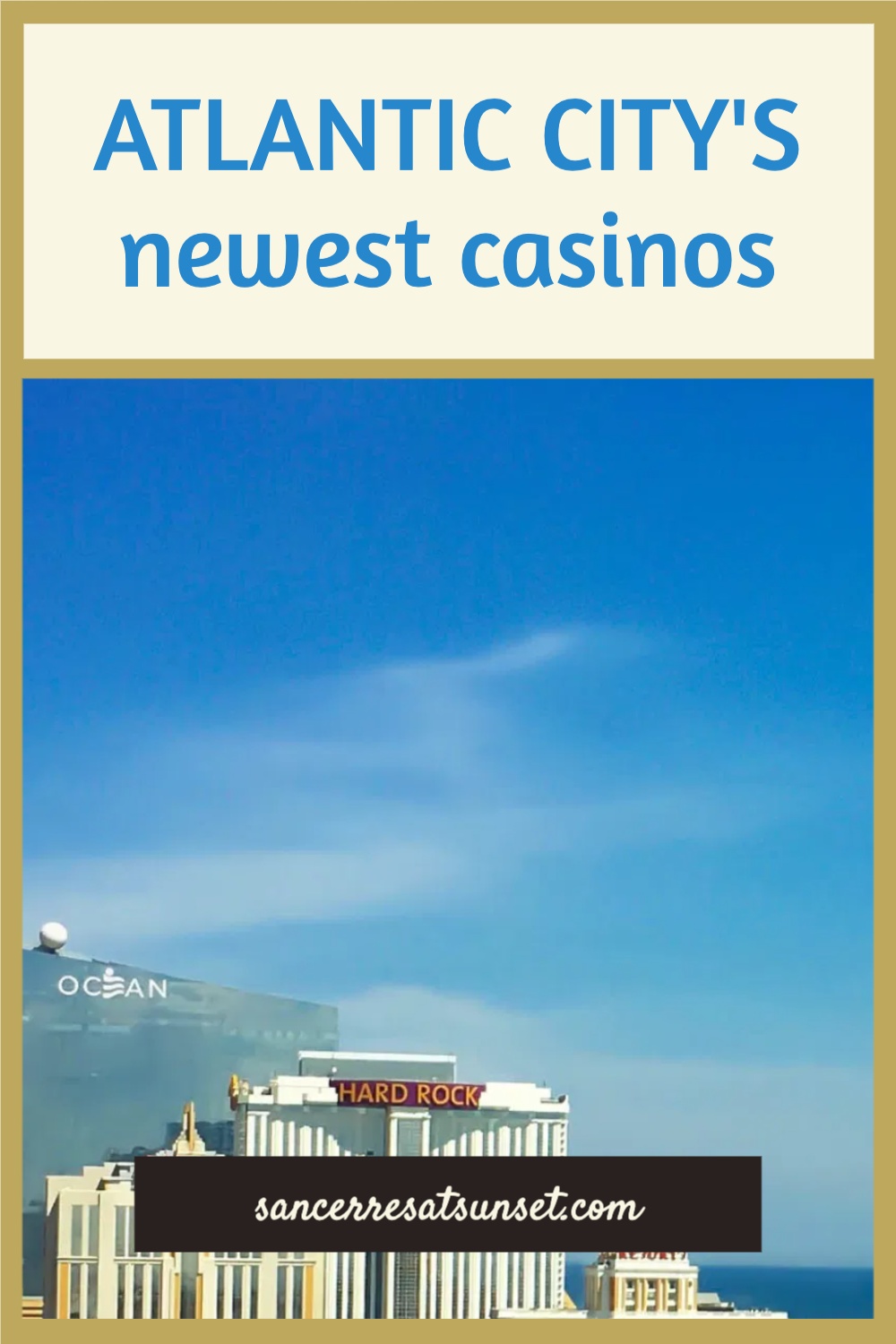 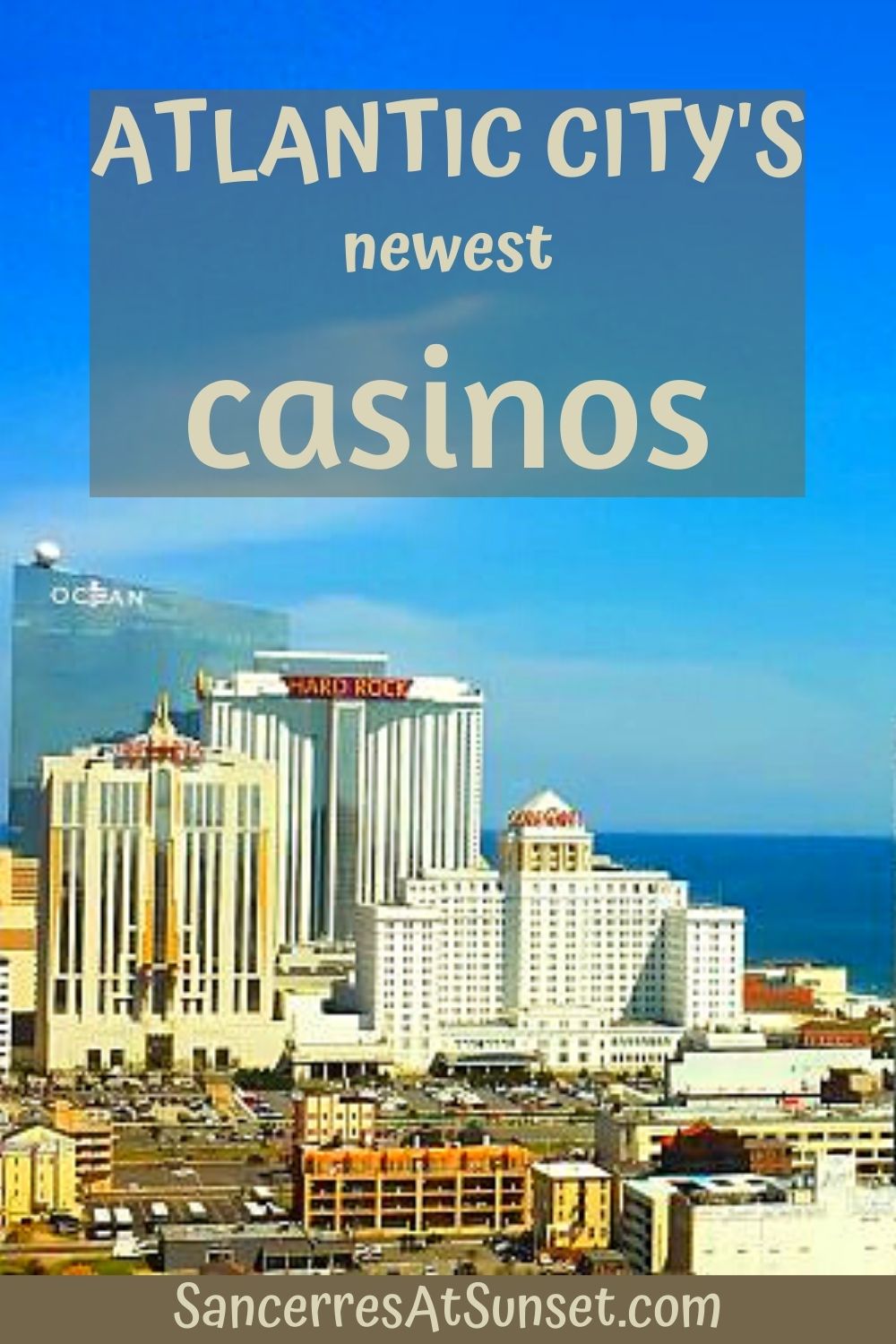