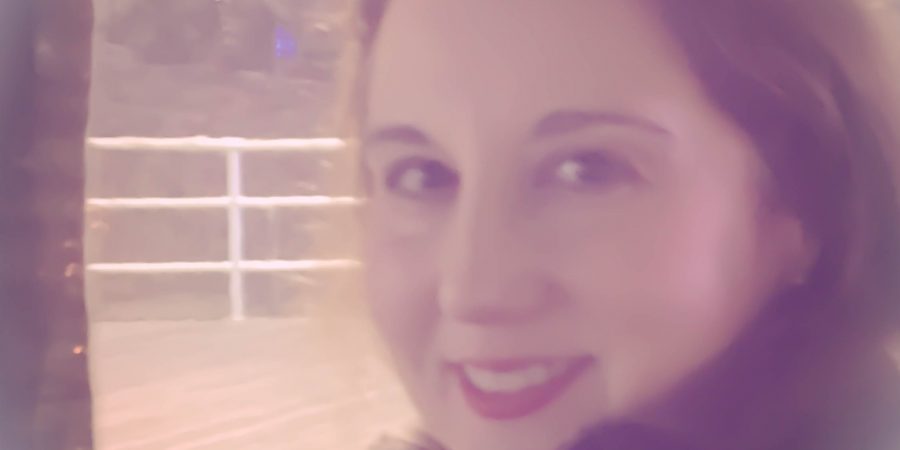 As I spread out our lunch of grilled kielbasa and fresh cheeses, aboard a ferry that was rocking in the rain, Atlantic City was on my mind.  In the middle of our mid-winter visit to my friend’s part-time place at Rehoboth Beach, we decided to take a quick side trip.  So we drove aboard the ferry at Lewes, Delaware, for a 90-minute ride and then drove off at Cape May, New Jersey.

Then we continued for another 45 minutes on to Atlantic City, where Caesars comped us a top-floor room with a nice view of the beach. 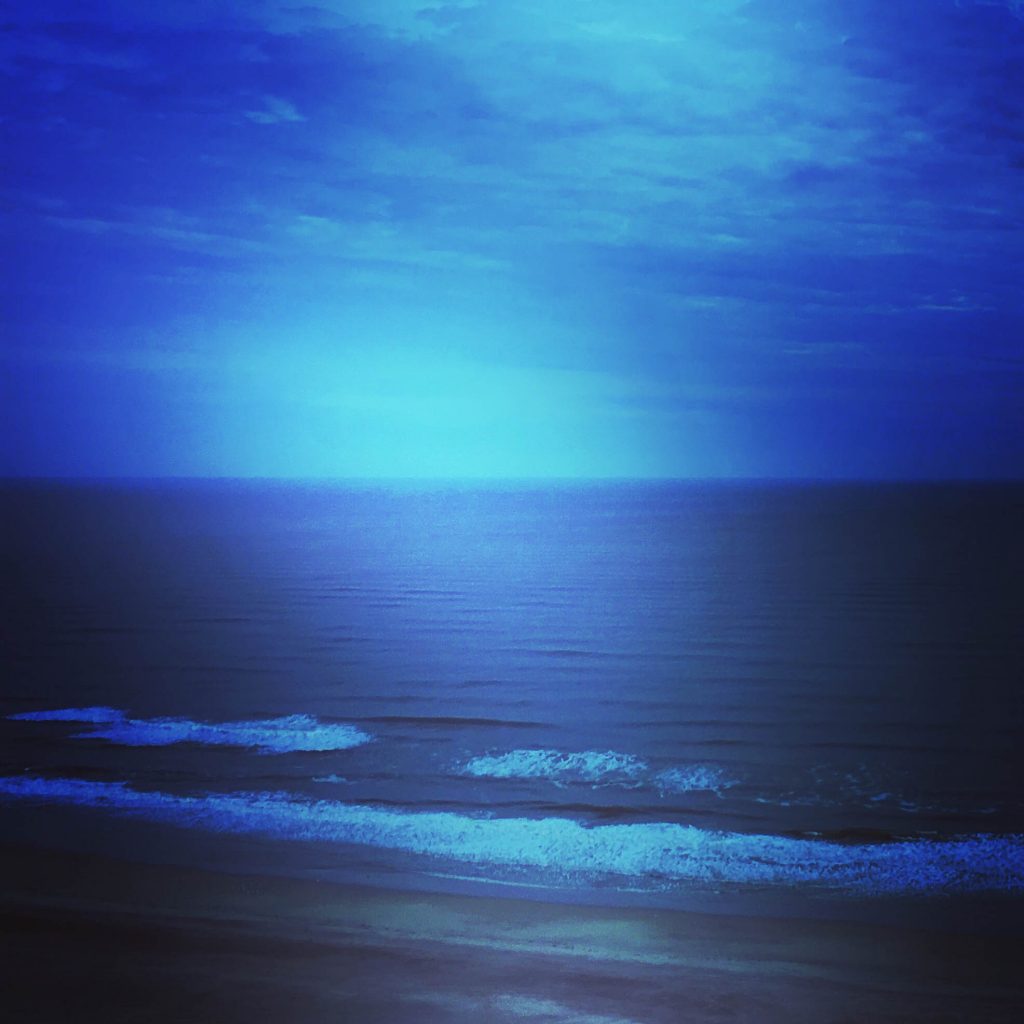 We were soon walking along the water in the cool crisp air.

Then we headed to Borgata for dinner.  We’d looked into staying there, but Caesars comped us and Borgata didn’t, so that was that.  As it turned out, our driver also works there as high-limit Black Jack dealer.  But we weren’t at Borgata to play Black Jack, high- or low-limit; we were there to try izakaya’s Monday Menu.  Sitting at the small sultry bar, we sampled several small bites.  Our favorites were the Tuna Tartare, the Lobster & Crab Taco, and the Pork & Scallion robatayaki.

Then we played a little video poker before stopping at Wolfgang Puck American Grille for a nightcap; the bar’s atmosphere was so pleasant that we ended up ordering a bottle of Prosecco.  I can only imagine what we’d have done if we’d been staying there.

In the morning, we took a stroll along the Boardwalk, stopping at Bally’s to play a little more.  Then I headed to the Qua Baths & Spa at Caesars. The Spa is pretty minimal compared with some of its Las Vegas cousins, but there are two things I love about it.  First is the big overflowing hot tub. 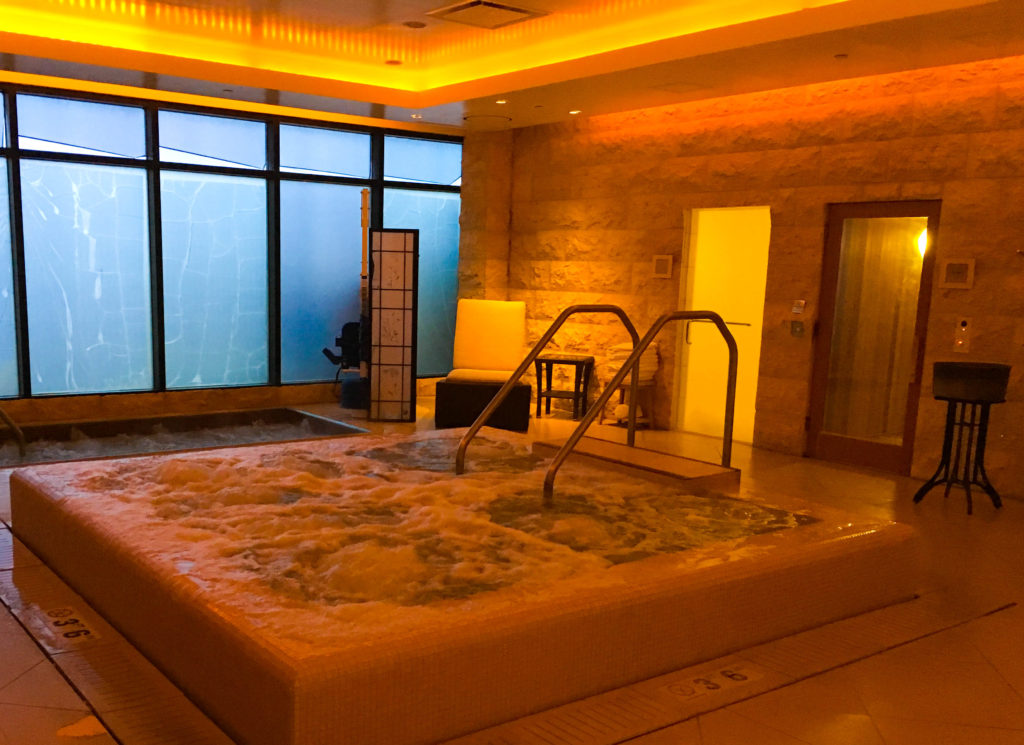 It was a slow Tuesday, and I soaked alone for about half an hour before being joined by a pleasant young woman who raved about the Spa at the Hotel Hershey. 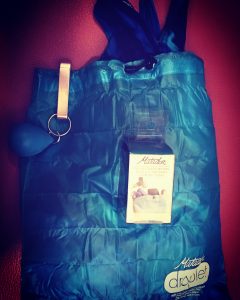 Then I took a quick shower in one of two spare but spacious tan tiled stalls, slipped my wet swimsuit into its droplet dry bag and myself back into white spa waffle robe, and headed to the waiting room for my other favorite thing:  among the best massages I’ve ever enjoyed.  For fifty minutes, my stress was challenged by a masseuse whose fabulous technique seamlessly blends long soothing strokes with strong spot finger pressure.  When the massage was sadly over, it was time for me to head back to the room to dress for dinner.

We strolled back down the Boardwalk to the Tropicana, because we like the range of restaurants there.  First we headed to happy hour at the bar at Olon.  I started off with the fresh jumbo-shrimp cocktail. 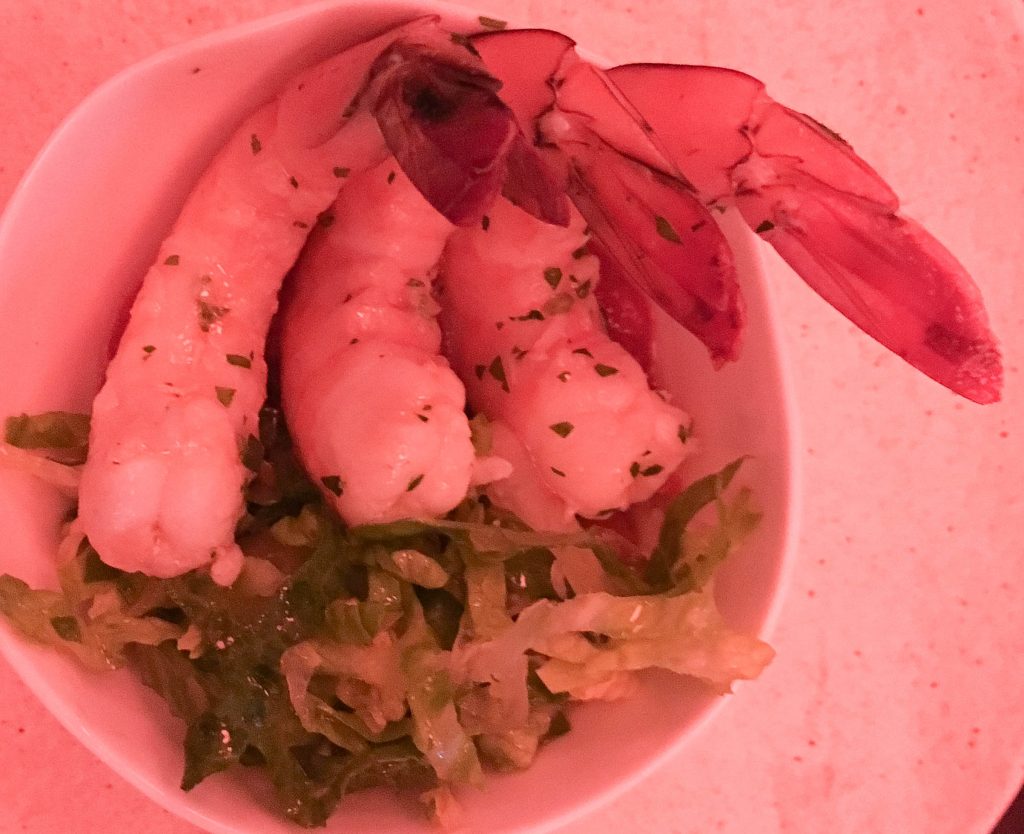 Things went downhill carb-wise after that.  We split one cheese and one chicken empanada, which were soft and delicious.  Then we ordered guacamole, which was fabulously fresh and dusted with cojita cheese and unfortunately accompanied by light and crispy taro chips.

The carb craze continued at Cuba Libre’s bar, with good chicken croquetas and great Cuban sandwich spring rolls.  But the main reason we were there was the fire-roasted vegetable platter’s fantastic array, from artichokes to zucchini, accompanied by generous creamy goat cheese, in which I indulged, and equally generous bread, of which I took three nibbles.  So I sandwiched our double dinner with healthy choices; it was just everything in the middle that was over the top. 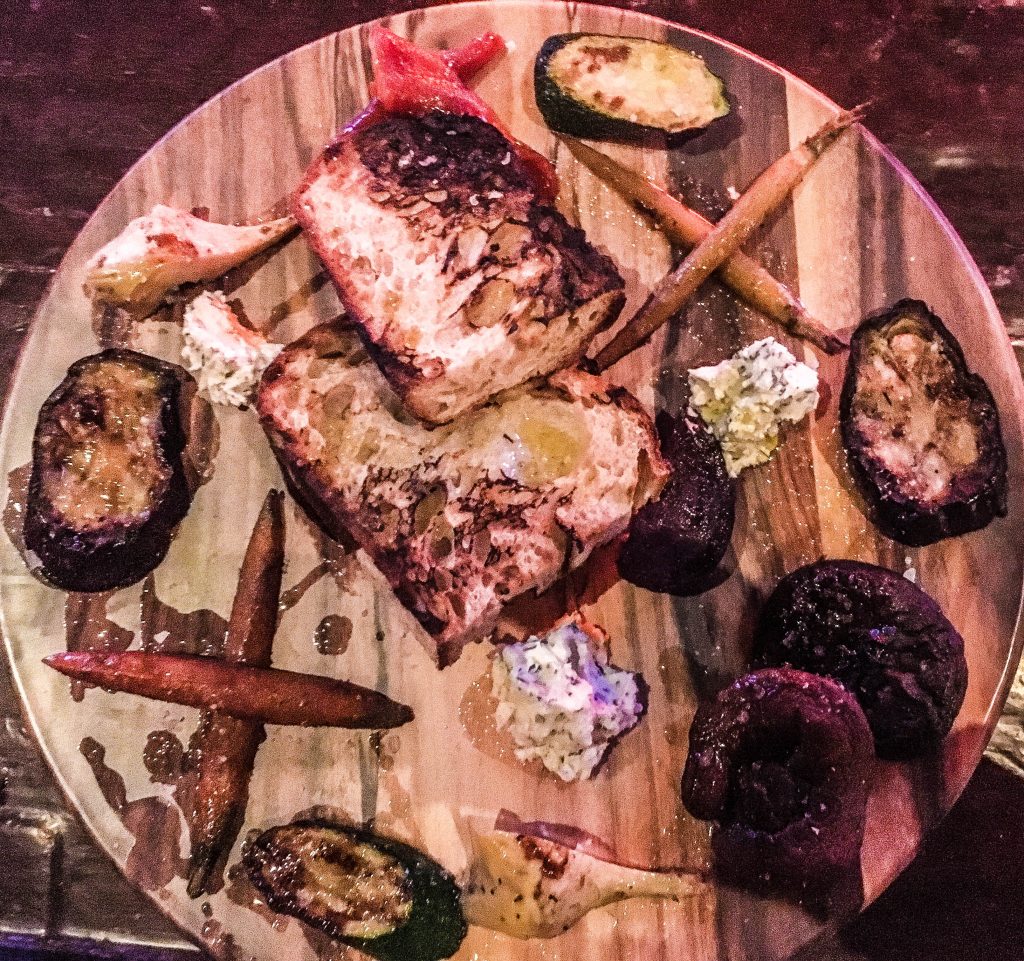 We stopped in the casino to play a little before stepping back onto the Boardwalk–and into pelting sleet.  So we took our first ride in one of Atlantic City’s rolling chairs, basically a plastic-enclosed rickshaw hand-pushed by a young man who can probably consume as many carbs as he wants. They’re a slice of the City’s history, beginning in the 1880s, cheaper and less messy than horses, and still a familiar feature more than a century later.  I loved the fun and fresh feeling of rolling along the Boardwalk. 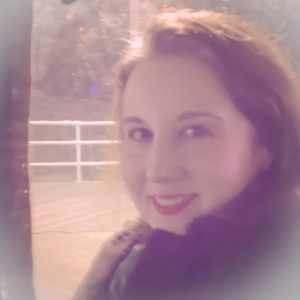 Back at Caesars, we played a little slots before bed.  By morning the weather had cleared and we went for our last stroll along Atlantic City’s iconic Boardwalk before leaving for our smooth ferry ride back to Delaware.

Planning things to do at Atlantic City casino hotels?  You might enjoy: 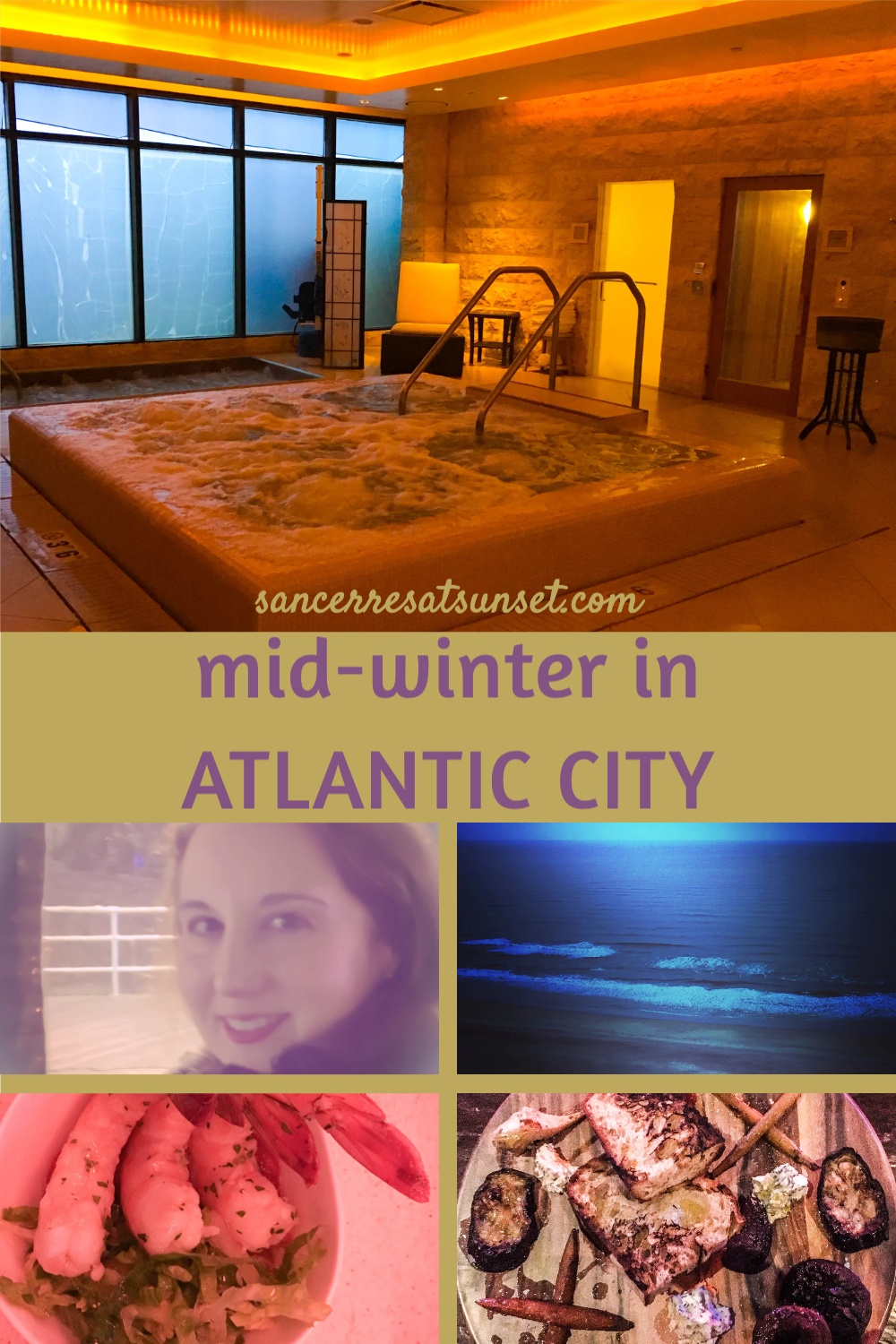 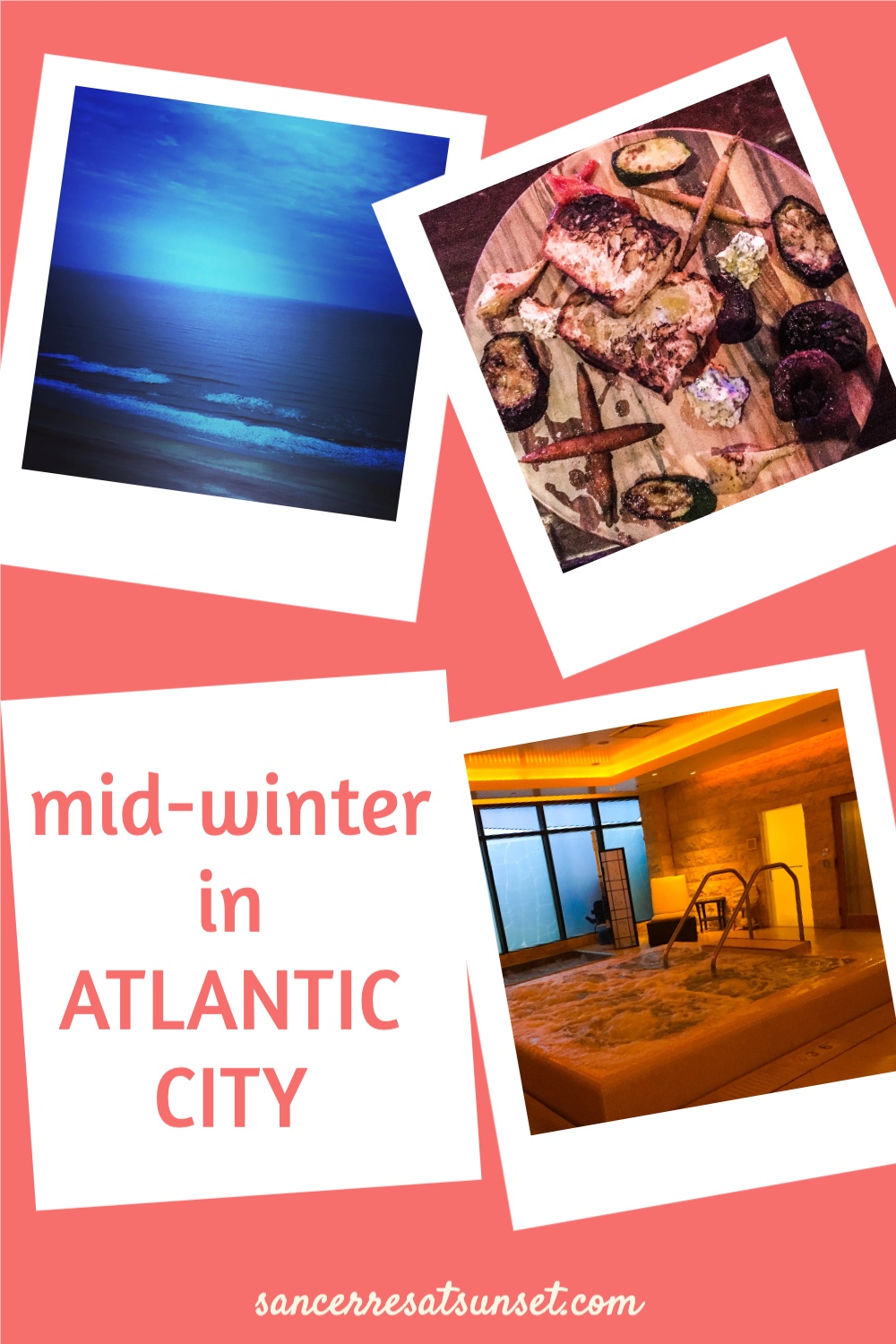 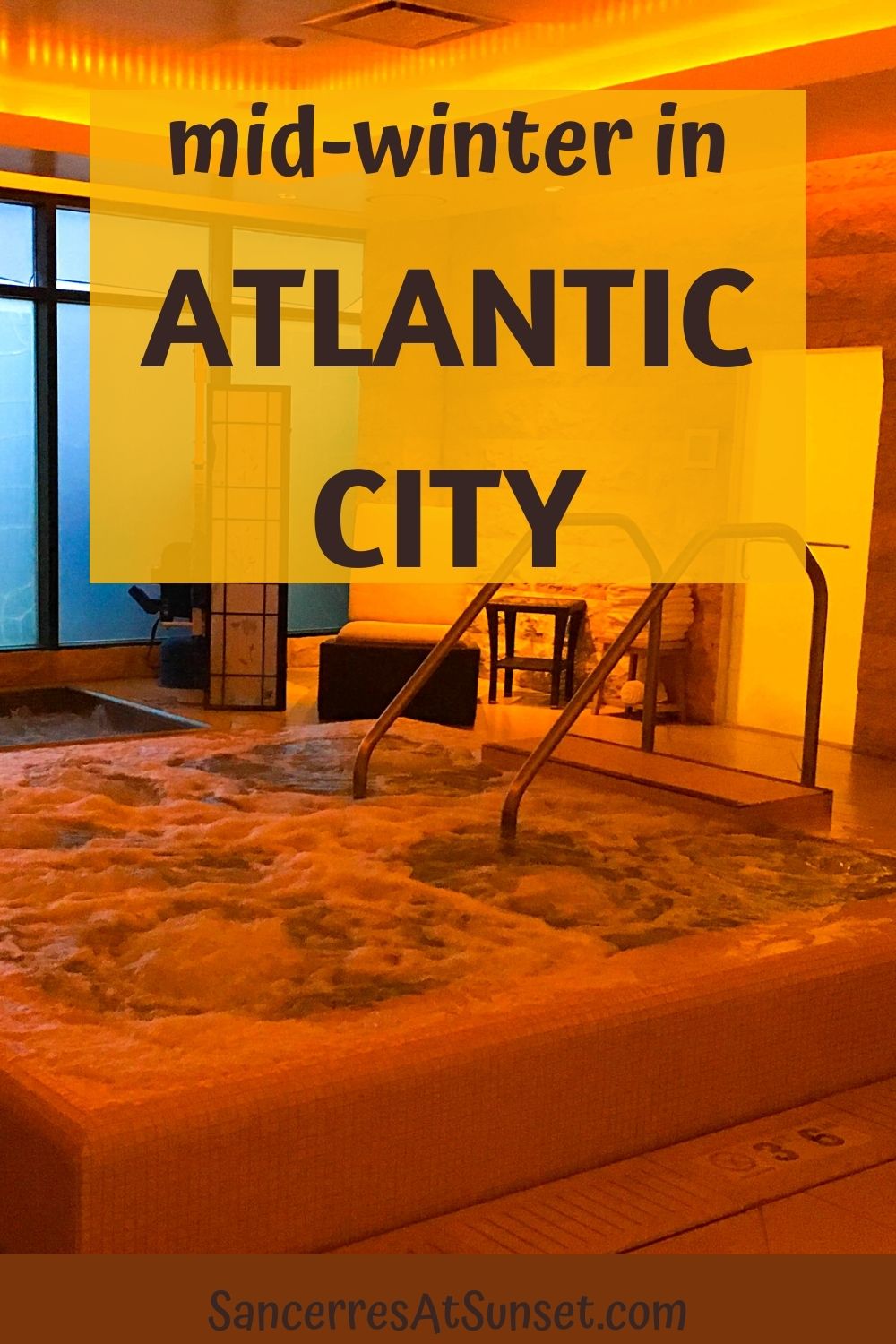 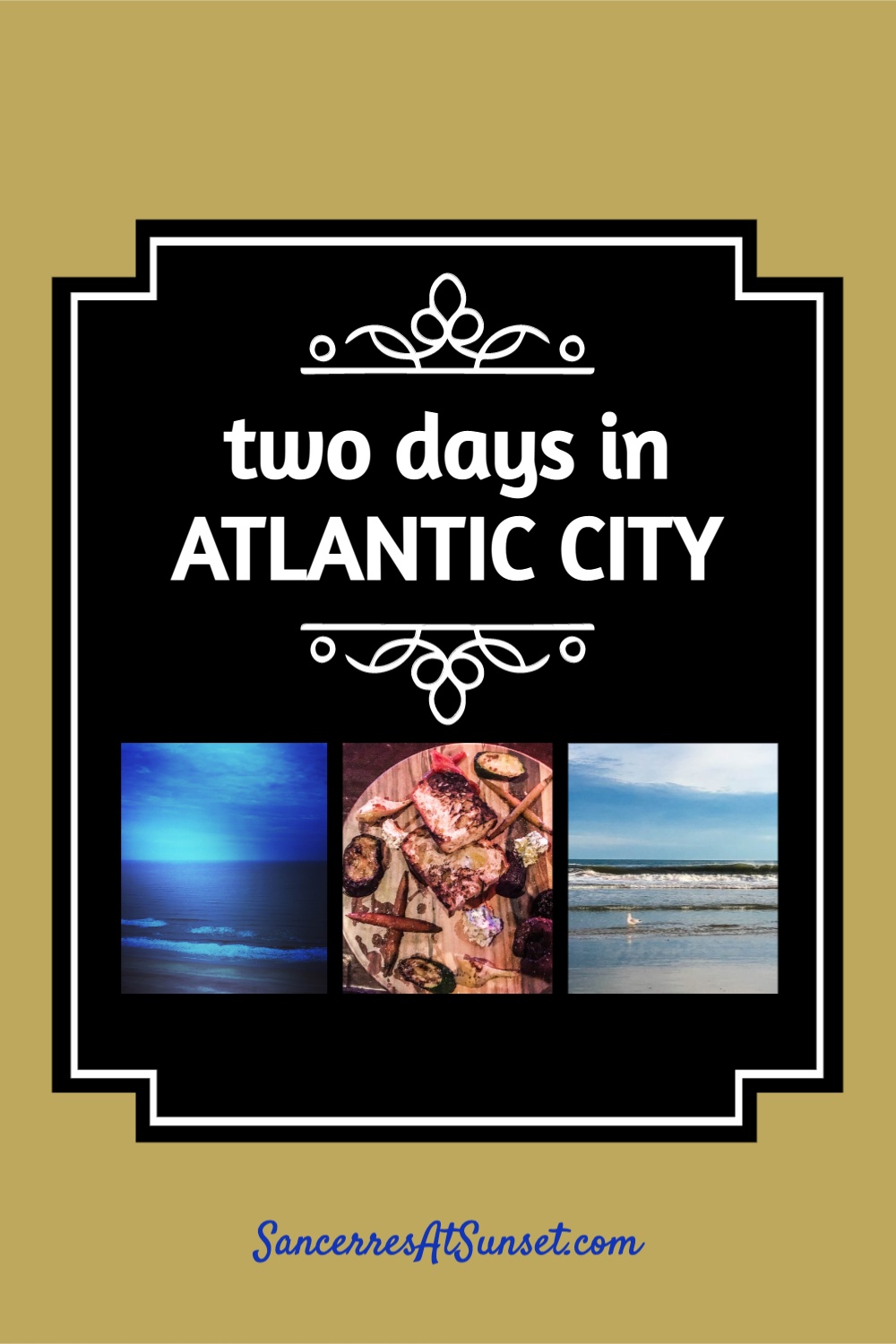