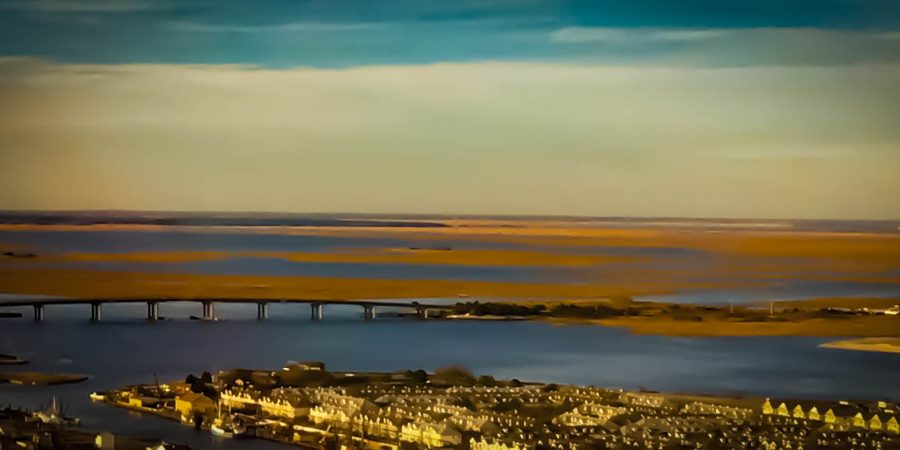 My travel companion and I walked under sparkling crystal chandeliers across glossy flooring laden with guitar-pick shapes.  We were checking in to Atlantic City’s new Hard Rock Hotel and Casino to take advantage of the comp-room offer we’d received as part of the hotel’s generous status-match program.  A pleasant young woman sporting a guitar-shaped name tag reading J.Lo upgraded us to a sweeping corner room with a fridge, a spacious modern bathroom, and floor-to-ceiling windows with views of the harbor and of the Ocean Resort, where we’d stayed on our October visit. 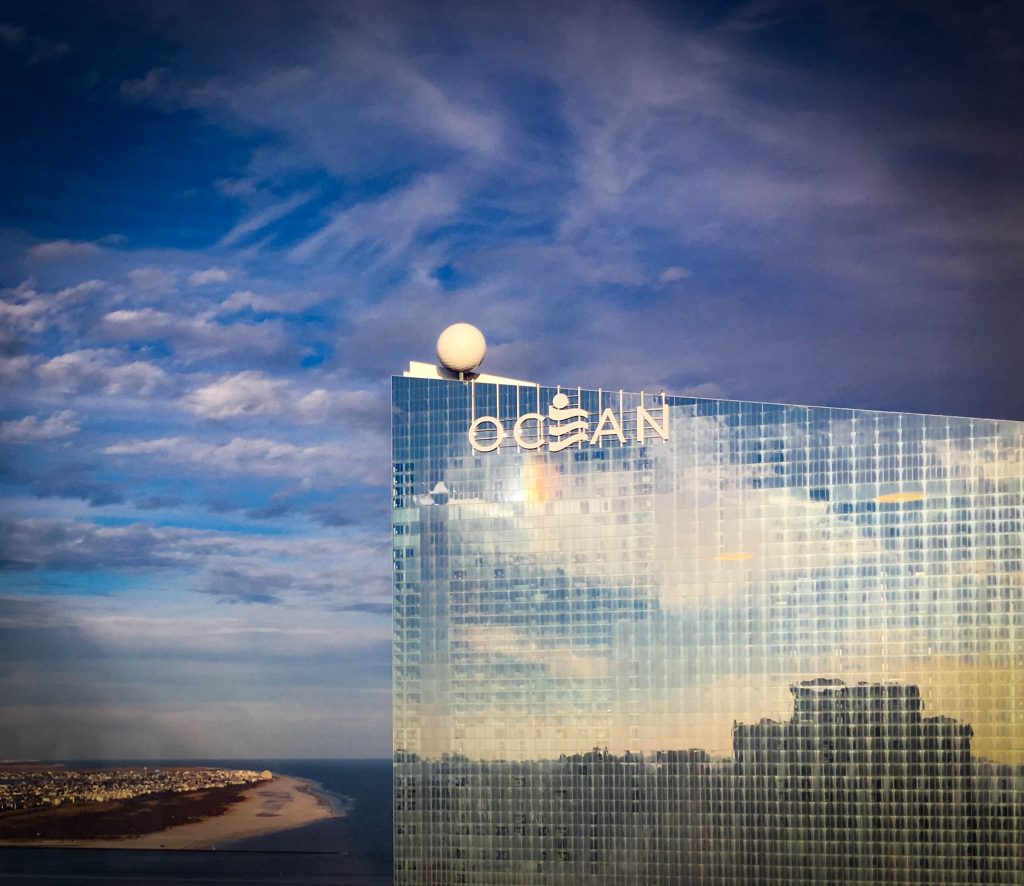 The new Hard Rock opened on June 28.  I hadn’t stayed there since it was the Taj Mahal, the gaudy goliath that former owner Donald Trump characteristically called “the eighth wonder of the world”.  But after a couple of bankruptcies, the place finally closed in 2016, while Trump was pursuing more rewarding opportunities.

Hard Rock purchased the property in 2017 for around $50 million, or about 4 cents on the dollar when compared with the $1.2 Billion that Trump blew through to build and open the place back in 1990.  But Hard Rock then had to spend 10 times as much–$500 million–to wash out the bad taste.  It was money well spent.  Gone are the tacky turrets, the glitzy gold and pimp-y purple, the elephant statues, the poker chips emblazoned with Trump’s image.

The aesthetic now is certainly splashy, but sleek, with neutrals balancing the neons, and cohesive, based on association with entertainers rather than on being one.

They don’t miss a beat with the branding.  Our ironing-board cover proclaimed “WARDROBE CHANGE”, in white sans serif caps against solid black. 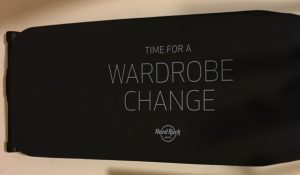 The top tier of the Wild Card Rewards players club is dubbed “Rock Royalty”; its perks include priority queues, complementary valet parking, and VIP-lounge access.  The intent is to make you feel more like a star among stars, and less like a groupie cheering and chanting from the crowd, evoking the comfort that brand discipline fosters, rather than the hope against hope that is the overripe fruit of brash chaos. 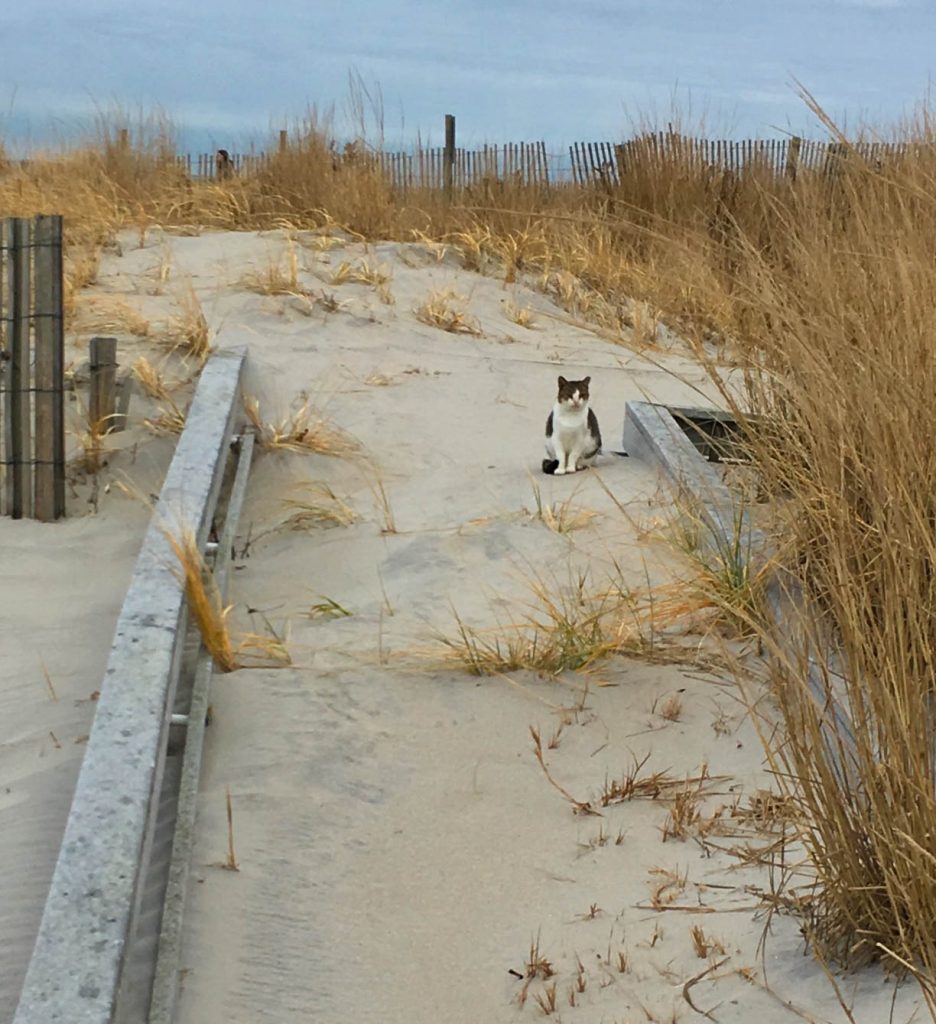 In the morning, we took advantage of the hotel’s location near the northeast end of the Boardwalk and went for a long walk on a relatively barren stretch of beach.  Our only companion was a stray cat.  We climbed out over a rocky breakwater and watched the surf roll in as thin clouds mottled blue sky. 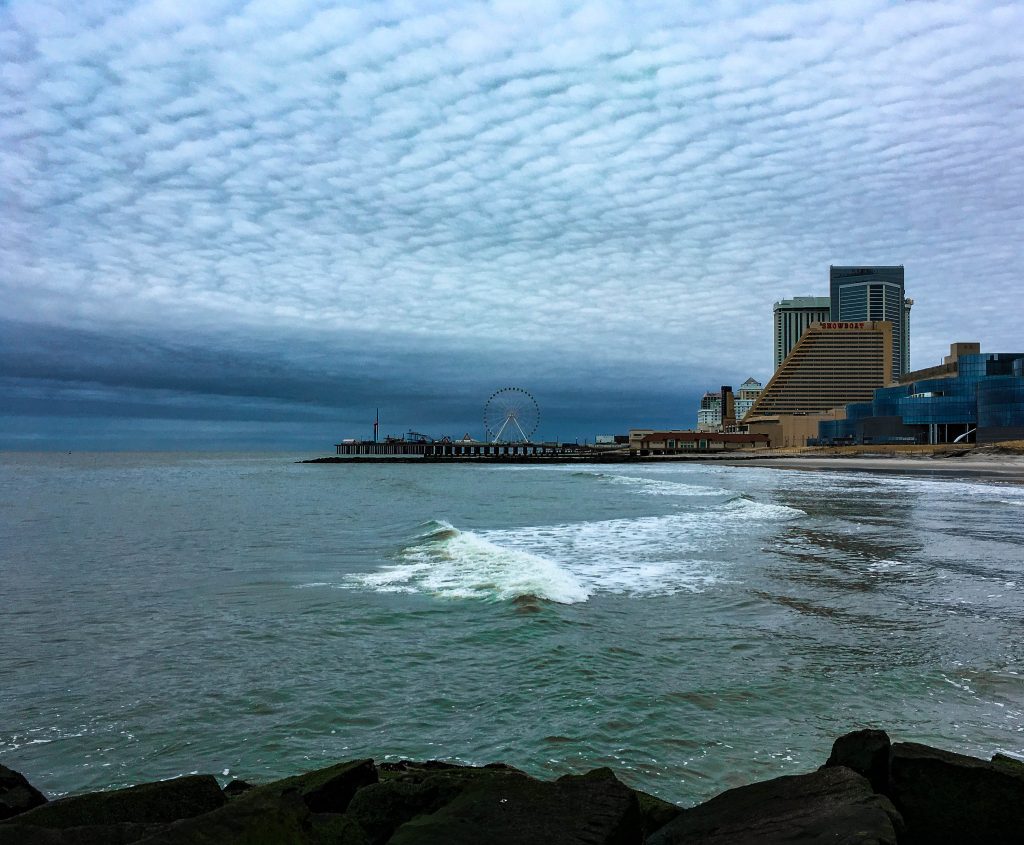 We stopped for an early lunch at Hard Rock’s Fresh Harvest, the buffet we’d enjoyed during our September visit.  It was even better this time.  The eggplant ratatouille was so delicious I had seconds.  The bread pudding rivalled what we’ve had in New Orleans.  And the service remained the best we’ve had at a casino buffet.

Hard Rock’s spa has received very good reviews, but the attendant wouldn’t let us preview the amenities for ourselves, and we decided not to book treatments.  My companion loves indoor pools though and spent some time in the afternoon at the hotel’s large and uncrowded one.  Then we played a while in the expansive casino, which is bright and clean and tightly packed with tables and slot machines. 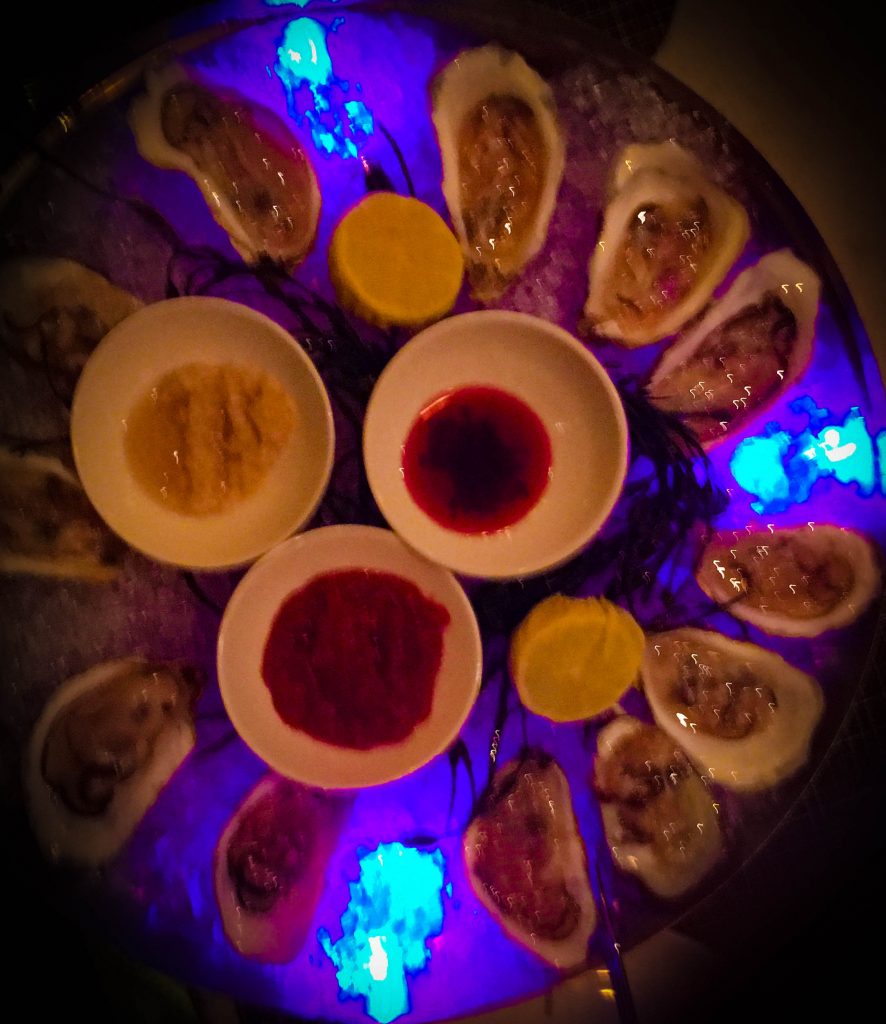 For happy hour, we started with oysters at Robert’s Steakhouse.  Then we stepped next door to sip red wine at Il Mulino.  Both have comfy and cozy bars a few feet off the lobby floor.  Finally we headed over to the Howie Mandel Comedy Club, because our status-upgrade offer included complementary tickets.  The humor was too raunchy for my taste, but others in the audience laughed loudly.

Hard Rock is a huge improvement over the old Trump Taj.  For decades, Atlantic City enjoyed tremendous advantage as the U.S. casino destination second only to Las Vegas, with a beach and a boardwalk to boot.  But with new casinos cropping up from Bangor to San Diego, Atlantic City can no longer coast.  It doesn’t have a rich and corrupt patron to bail it out from bad deals and decisions.  It needs well managed upscale accommodations.  Hard Rock can play a key part in Atlantic City‘s comeback. 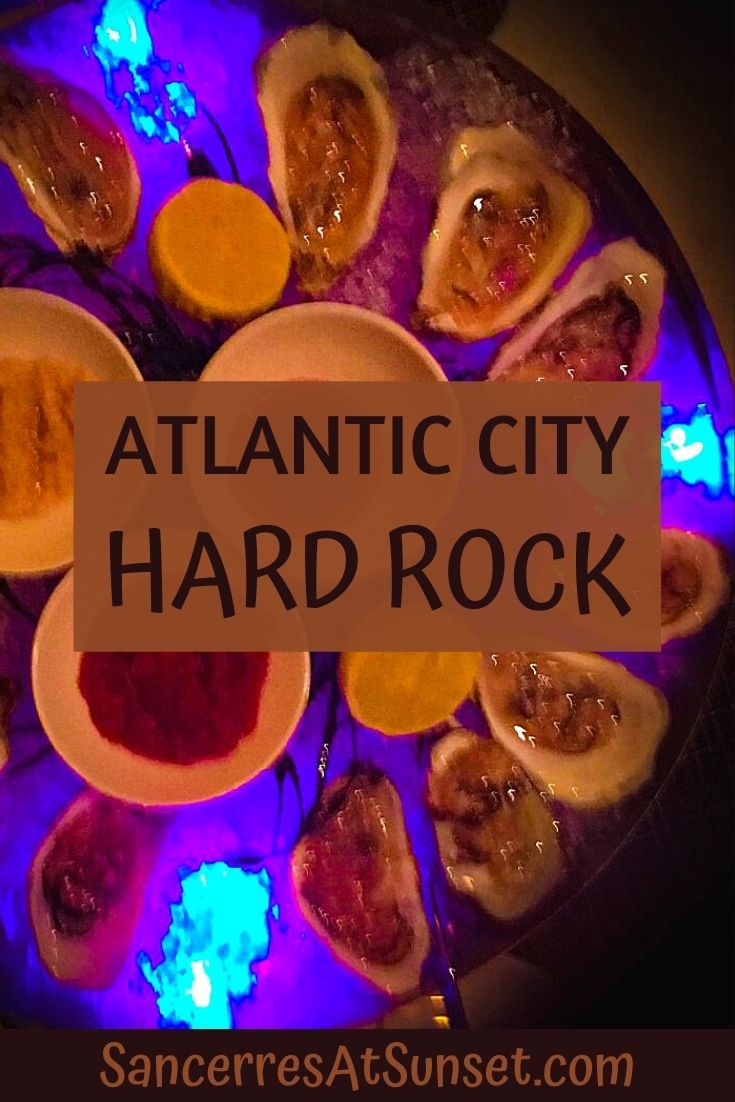 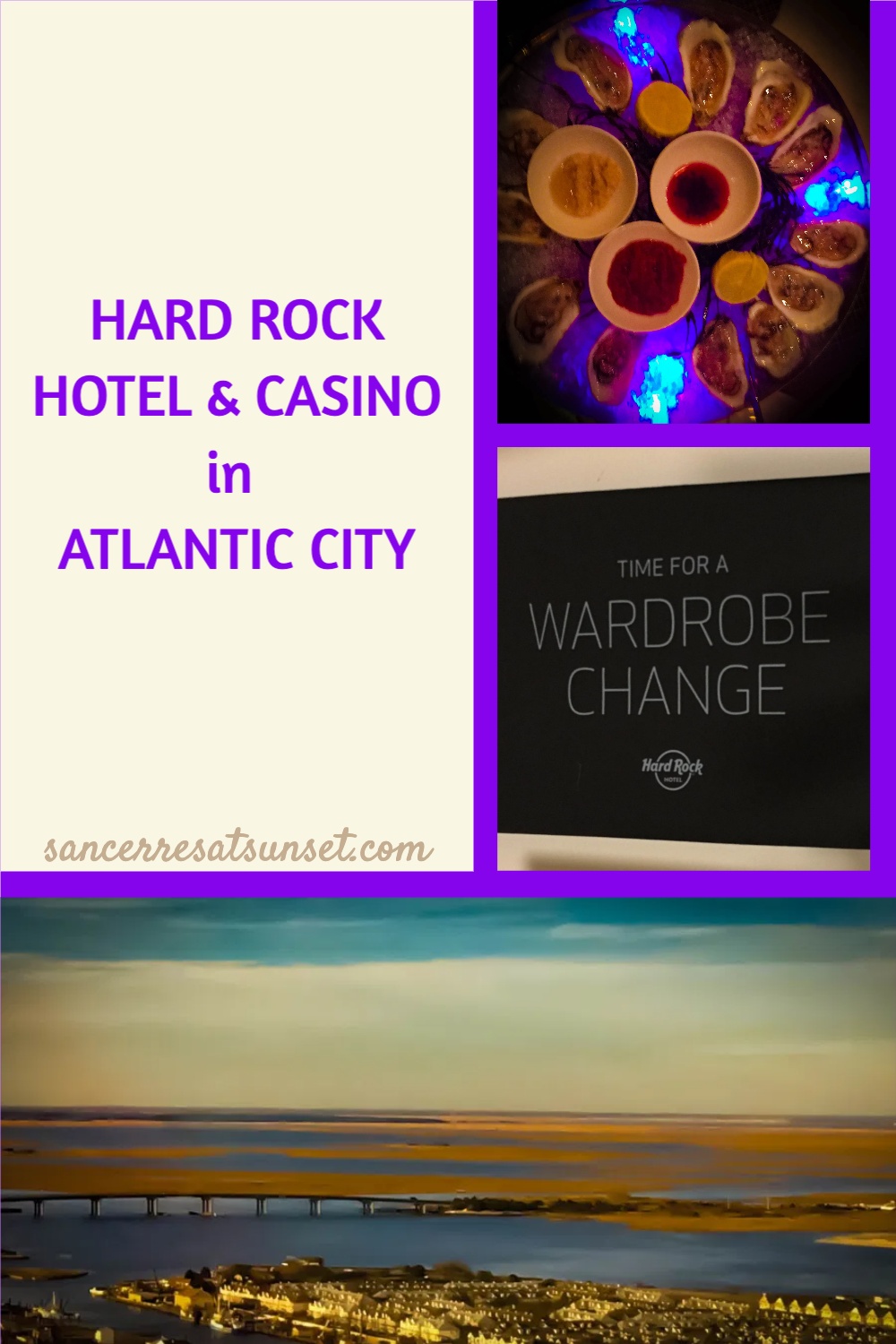 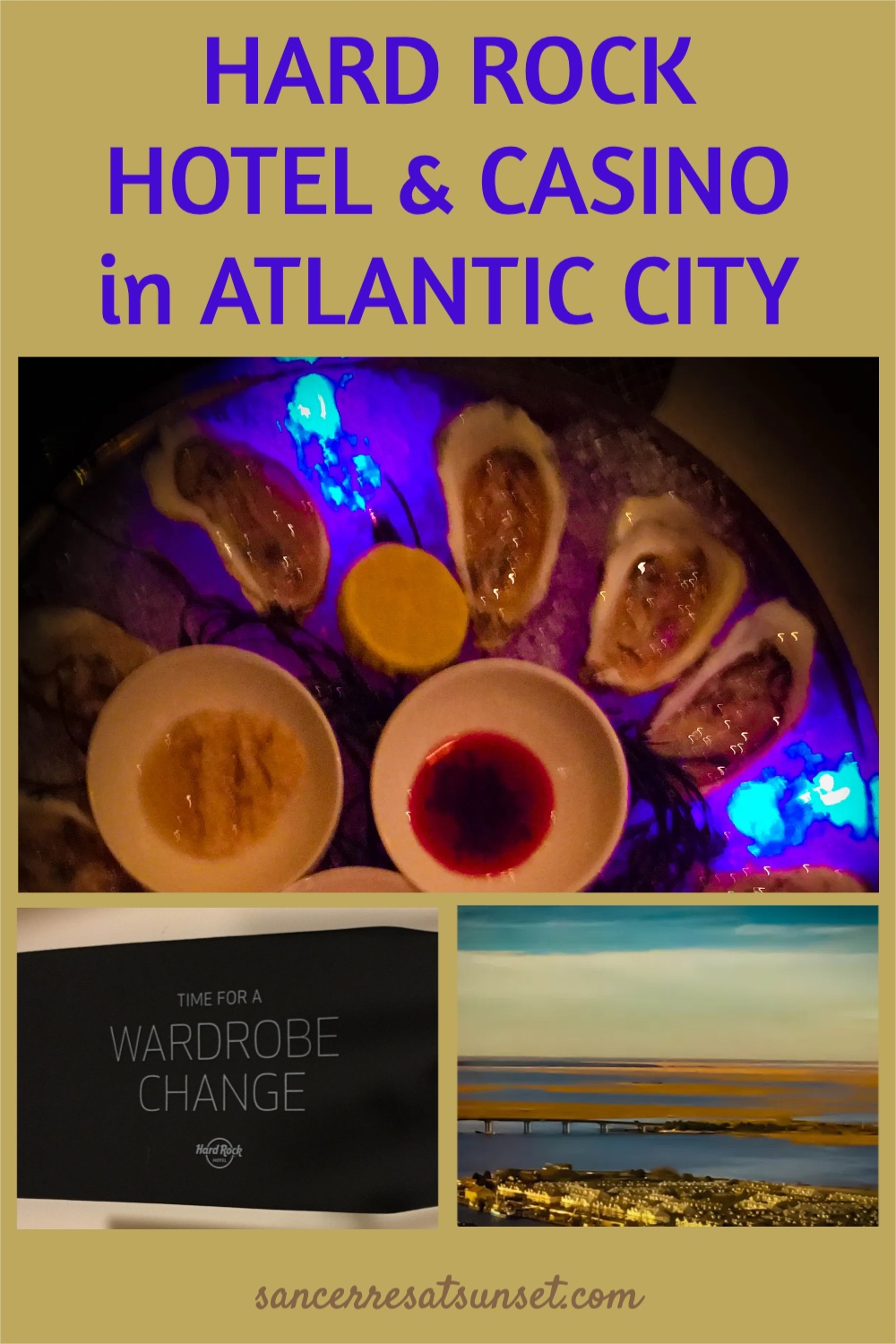 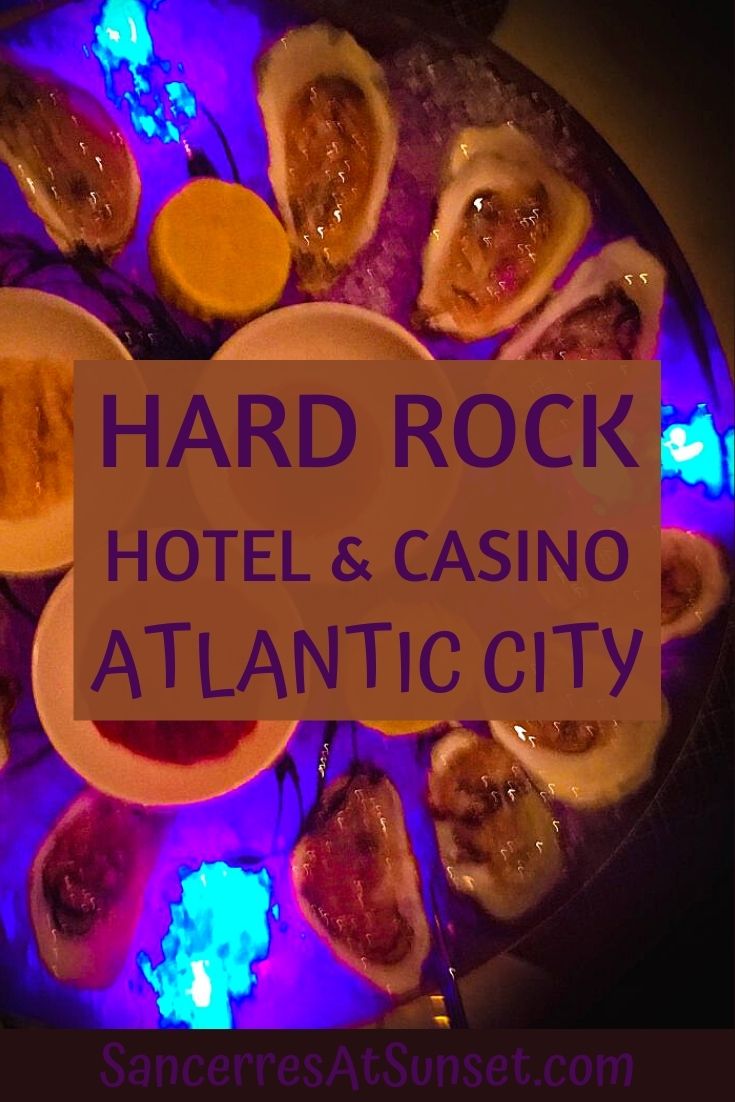 6 thoughts on “Hard Rock Hotel and Casino in Atlantic City”