Plastic-covered white boats rocked in the driving rain as my travel companion and I watched from our restaurant table overlooking the small marina.  We were in Newport, Rhode Island, for another short break from the on-going renovation of my house.

Still thrilled with my wonderful birthday stay at the Hotel on North, we had reserved a room at its Stash sister property, the self-purported luxury Hotel Viking, which was offering a special package including a discounted rate, triple points, and a space-available upgrade.  Our room was understandably not ready at 9:30 in the morning, so we dropped off the car with the courteous and helpful valet staff and Ubered to Saltwater restaurant in the Newport Harbor Hotel.  I’m still trying to go low-carb, and the fluffy sausage omelet I ordered was quite good.  Unfortunately, so were the accompanying home fries, a little crispy on the outside, tender on the inside, and liberally seasoned with Old Bay, but I only ate a few and didn’t touch the toast.  I wouldn’t be as good later in the day.

It was still well before noon when we finished our satisfying breakfast, and we couldn’t complain that the hotel hadn’t called yet to say our room was ready, so we Ubered to The Breakers, the Vanderbilt family’s former summer “cottage”, which was completed in 1895 but later opened to tourists in order to blunt the damage of confiscatory income and death taxes.  This Downton Abbey:  American-Style once provided jobs for dozens of people, many of them immigrants.  They were called staff as a term of respect and were usually grateful for the work and glad to play a part in the industrialization creating wealth and boosting the overall economy.  A butler ran the show.  Footmen had to be six-feet-tall in order to look as imposing as their surroundings.  Maids were to be out of sight as they changed bed linens twice daily and cleaned the statues and reliefs, mantles and chandeliers, floors and furnishings of the 70 rooms of the Gilded Age’s gilded mansion, including a great hall, an open-air living room, a breakfast room, a morning room, a billiard room, a library, and a conservatory. 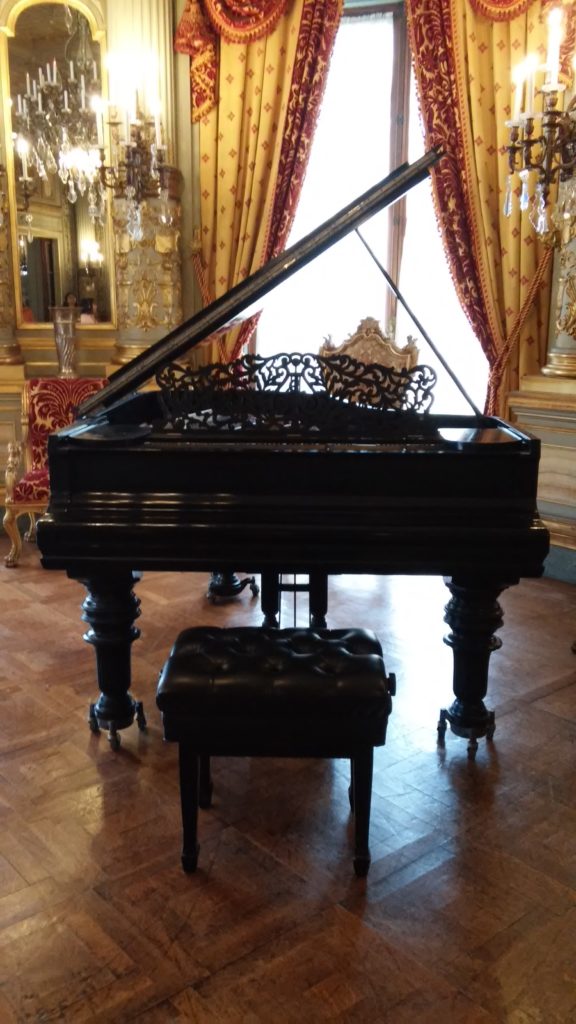 Being a millionaire is not what it used to be.

It seemed like a stroke of serendipity that the Viking called just as we were finishing the tour to say our room was ready, so we Ubered back to the Hotel.  Our cozy room boasted a two-poster king-size bed, a slanted wall over a narrow window, a gallery of early 1900s prints featuring Teddy Roosevelt and the Suffragettes, and a small bathroom with toiletry dispensers affixed to the walls, a modern bowl sink, and a curtained shower/tub.

It was Restaurant Week, and the earliest dinner reservation we could get was 8:00 at Benjamin’s.  At 7:00, we decided to head over to the restaurant.  The bar was packed, so we meandered around in the cold, popping in and out of overflowing bars, till we walked into 22 Bowen’s.  Both its bars were full too, but the restaurant looked so nice that my friend suggested asking for a table.

It was a great decision.  They’d had a cancellation, so we were immediately seated at a comfortable four-top.  The dining room was full, with the moderate volume typical of fine restaurants.  At a long table nearby, a dozen suited men and women in low-cut dresses and white fur jackets talked about the Red Sox prospects.  My friend stepped out to cancel the reservation at Benjamin’s; they were actually appreciative as the restaurant was over-booked.

The waitress’s countenance brightened when I ordered a bottle of wine slightly pricier than the cost of the Restaurant Week prix-fixe menu.  Since I’d been good about the potatoes at breakfast, and hadn’t eaten lunch, and was planning a low-carb dinner, and was in Rhode Island, I rationalized that I was entitled to a bowl of clam chowder.  It was one of the velvety-est I’ve ever had and an encouraging sign for the dinner ahead.  I ordered a two-pound male lobster.  It was also an encouraging sign that the waitress didn’t try to claim there’s no way to tell.  (It’s happened.)  The question was:  broiled or steamed?  I know I love steamed and had never had broiled.  But it was lobster in an obviously fine restaurant.  How bad could it be?  I ordered the broiled.  Travel is about surrendering to the new in the now. 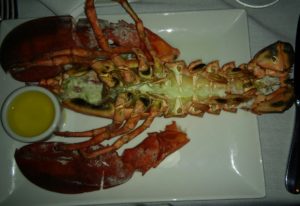 He came out on his back, claws already detached, tail out, with char marks on his fins and very little tomalley.  I cracked open a claw and swirled the white meat in butter.  It tasted almost exactly like steamed, in other words sweet and delicious.  The main difference was in the texture—just a little bit sturdier.  It took me a little longer than usual to work the meat out of the tail, but I managed and ate the whole thing.

Unfortunately, under the influence of half a bottle of Sauvignon Blanc, I impulsively ordered a chocolate chip cookie dough torte—a slab of dough topped with chocolate cremeux, alongside vanilla bourbon ice cream.  It was richer than the Vanderbilts.  Fortunately, I couldn’t finish.

My friend loves public parks and as usual found one for our morning walk.  At first, Brenton Point State Park looked like every other water-side park we’ve traipsed through from Acadia to La Jolla, but that was just as well since I had to watch where I was stepping through the goose poop covering the grassy stretch between the park’s main road and the rocky shoreline.  But we found a spot to climb down, and I soon realized I’d never seen such a variety of color in rocks—mauve to purple, peach to coral, aqua to teal.  The rocks were even more alluring than the white spray bursting against them. 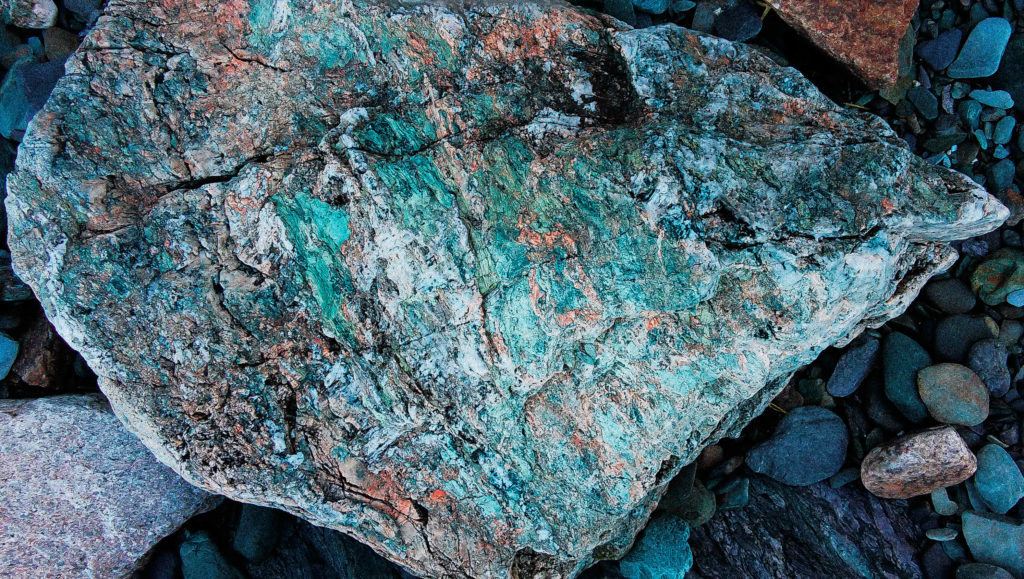 Since we skipped breakfast, we were pretty hungry for lunch by the time we sat down at a large wooden booth near a paned window at the Midtown Oyster Bar.  Trying to get back to my low-carb ways after the previous night’s chowder-and-chocolate extravaganza, I ordered an onion soup and a chicken chopper salad, requesting ranch dressing instead of the house honey Dijon.  Even eating around the bread, the salty soup was very good with its generous amount of cheese.

After lunch, we browsed through downtown Newport, checking out the preppy clothes (“the ‘80s called; they want their styles back”) and tourist kitsch, some usual, and some not so usual.

“What would you call that thing?” my companion asked.

Even so, I felt at home amid the classic coastal New England homes with their painted wood, shuttered windows, and gabled roofs.  We walked down a dock.  Since it was New England, the weather was completely different from the day before—bright and sunny.  I stood at the end of the dock with the sun on my face and felt truly warm for the first time since the flood.

We stepped into La Vasca for drinks and possibly appetizers 1) because it looked fun and 2) because it was open.  The Basque tapas restaurant smelled as promising as it looked when we settled onto stools at its burnished copper bar facing the open kitchen and already set with small plates and utensils.  A young bartender with pulled-back dirty-blonde hair and a small gold nostril ring greeted us with menus and pulled the plates out of our way when we said we’d start with drinks and wait on food.  In my mind I named her Amanda because she reminded me of Amanda Seyfried in Mamma Mia.  I tried hard to ignore the thin toast drizzled with olive oil she placed in front of us.

The wine list contained mostly Basque vineyards I wasn’t familiar with.  My friend ordered a Tempranillo.  When I told Amanda I was looking for a crisp dry-but-not-too-dry white, she recommended the fruity Picpoul.  It was fabulous—very crisp with a burst of citrus on the finish.

As we sat and sipped, a young chef a few feet from us cured a large piece of fish.  It looked like salmon, except that it was too red and we didn’t see gravlax listed among the tapas ranging from Albondigas to Patatas Bravas.

“How long will you cure that?” my friend asked.

“This is the second cure, so it will be in the fridge for two more days.”  It had first been treated with beet, explaining the redness.

Another thing that wasn’t on the menu was penne, but a large bowl appeared in the kitchen beside a plate of eggplant.  “It’s for the staff family dinner,” another bartender explained when we asked.  Amanda filled a small plate, disappeared with it, and then came back to check on us.

“It’s great that they give you dinner like that,” my friend told her.

She agreed, explaining that it’s usually just such a grab-and-go snack on weekends, but during the week they sit down at table before opening at 5:00, eating their fill while sampling new menu items.  “They take good care of us,” she smiled.

And she took good care of us.  “I love food,” she volunteered.  And like most foodies, she clearly loves sharing it with others.

Finally we ordered the croquetas de jamon.  “We always bring out a few things you didn’t order,” she told us.  “Are there any allergies or just things you don’t eat?”  No and no.

I couldn’t resist the bread any longer.  The Spanish olive oil was excellent, peppery and lingering.  Paired with the Picpoul, it produced a pleasantly powerful blast of fire at the back of my throat.

Amanda brought out two Asian soup spoons, each with one mussel escabeche, deliciously tangy without being too strong from the vinegar-based marinade.  Next came tuna confit, so flavorfully fatty that my friend liked it better, though I still preferred the mussel.

The croquetas were actually the weak link of the meal.  The ham was sparse, and the smooth potato filling was better without the sharp slightly burnt taste of the crusty breading.  On the other hand, we liked very much the Charred Pt. Judith Squid with Romesco, sort of a low-carb calamari.

“Do you make the za’atar here?” I asked.

I thought so.  It was the best za’atar I’d had since buying a too-small packet at the Carmel Market in Tel Aviv.

As we sipped on the dregs of our drinks, Amanda looked almost smirkingly gleeful spooning out orange and vanilla granita, which immediately became my friend’s favorite taste of the night.

As we walked the long way back to the hotel, the sun had set but the glow lingered. 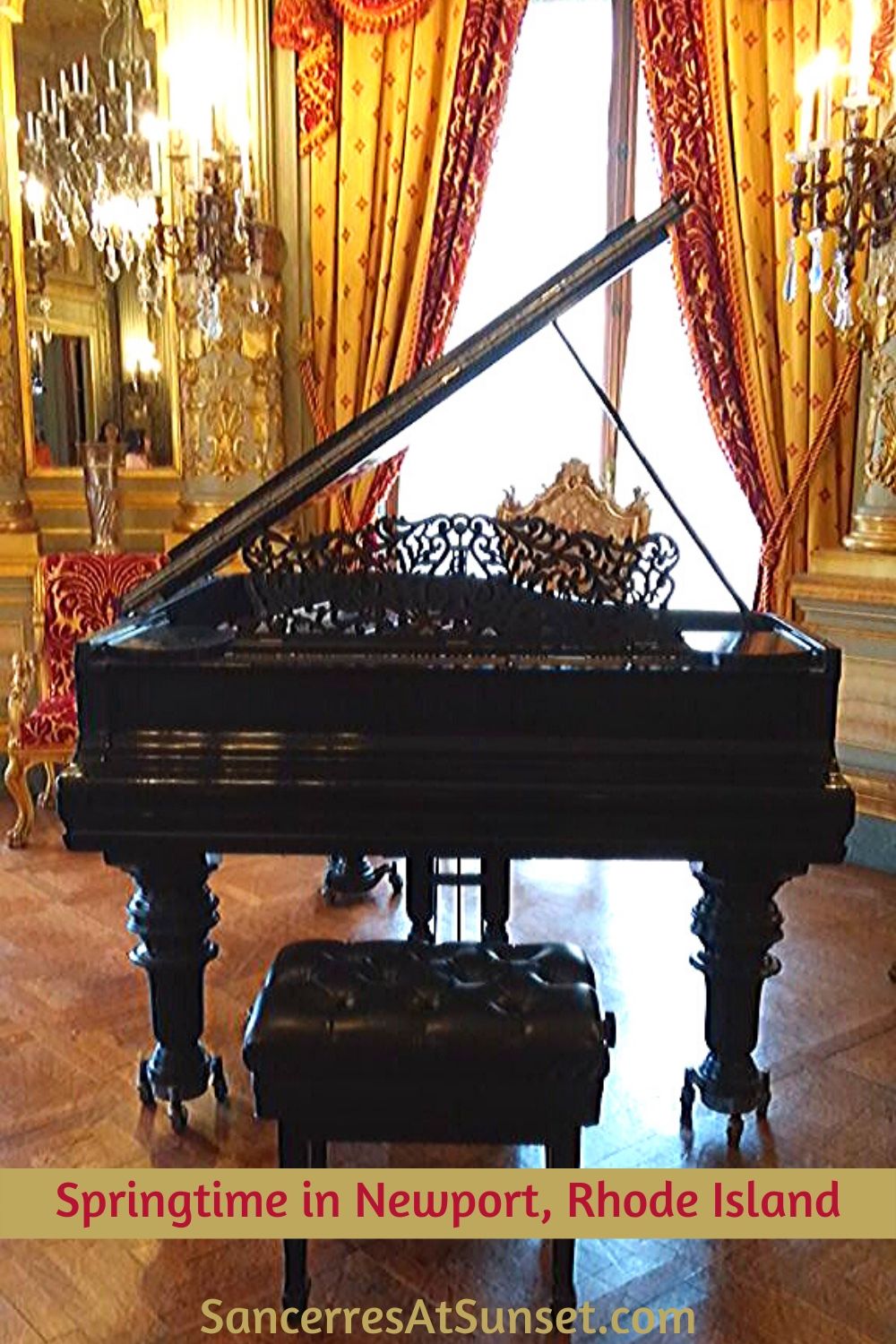