The waves lapped softly against the moorings.  The metal gangways creaked in the light breeze.

Even in daylight, the empty marina gave off a spooky feel that reminded me of Salem, Massachusetts, the city of my birth, as I walked to the Saybrook Point Inn’s main building from Three Stories, its guest house across the street.  Though I was much looking forward to my 5:00 massage, the Connecticut River drew me to its edge.  You don’t have to be in the water to feel its tug. 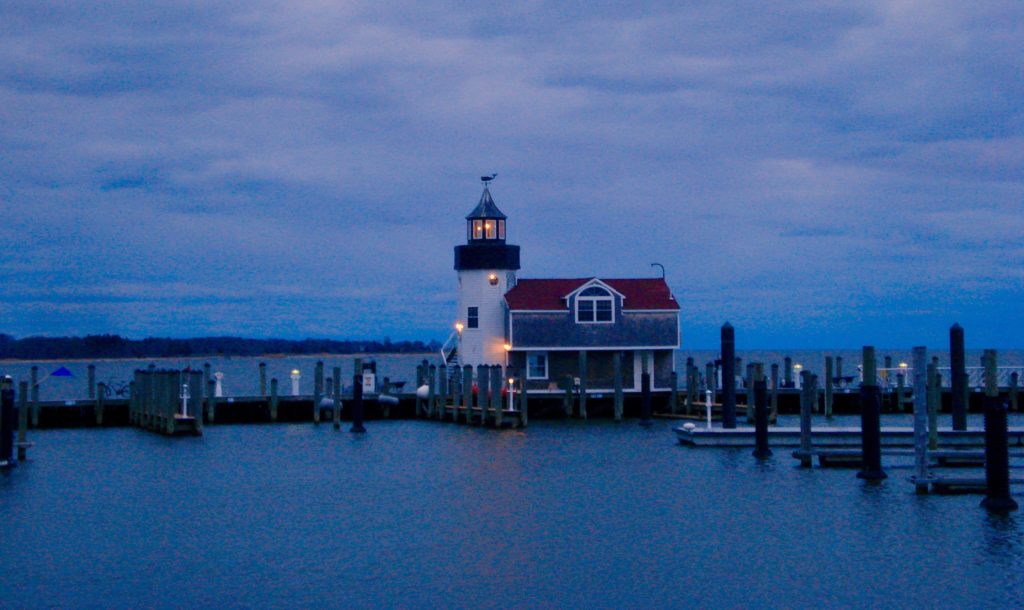 I checked in at the Sanno Spa and changed into a fluffy bathrobe in the small locker room.  I passed on the wine for sale but snacked on the complementary trail mix in the sparse kitchen-like area off the plush waiting rooms.  At 5:10, the masseuse popped in and chirped, “Let’s go get a massage!”

The Swedish massage was especially welcome after my long drive up from Virginia.  It’s a trek I make quite a bit.  After growing up in Massachusetts, I took off for college in Washington, D.C., and remained in that area for more than 20 years.  Then my father asked me to come home; he and my mother were both ill.  I went, none too soon as it turns out; both my parents were gone within the year.  So there I was, alone in my high-school home, haunted by the family photos on the walls and on the tables, by the quiet backyard where we’d picnicked and partied and picked fruit from trees that turned from spring green to autumn yellow, orange, and red, by the empty chairs at the bare kitchen table where we’d spread out newspapers and picked lobster carcasses for salad meat, carved pumpkins for Hallowe’en, peeled apples for holiday pies.  Getting this Manderlay of memories—where my waste-not-want-not mother had saved everything, down to the tissue paper from my parents’ left-over wedding invitations—ready for market has been sad and slow.  I had to get out of there, so I found an apartment in Alexandria and escape there when I can.  As hard as it can be to come home, it is still home.  And now that I’m adrift in the world without main-anchor relationships—no parents, no husband, no children—the things that moor me to who I am are the physical lines to the place that shaped me, the sights, sounds, and smells, the tastes and touches, of home, of my childhood, of the time when I belonged to a family.

Even though I was stopping short of Massachusetts, I started to feel at home as I rounded out the last two hours from New York City and drove into Old Saybrook, Connecticut, New England at its New-Englandiest.  The two-storey painted wooden houses, close to the road, had a Salem-y aura, each with its wide, screened-in front porch, or, as we used to call my grandmother’s, the piazza.  The familiar feel deepened as I neared the waterfront Inn and its marina, recalling some of the funnest days of my childhood summers, the ones spent aboard my grandfather’s cabin cruiser; her name was The Good Omen, but we simply called her The Boat.

At 6:00, my massage was over before I knew it.  I sat afterwards for a few minutes on a pale grey chair, propping my feet on its matching ottoman, in front of the fireplace in the spa’s relaxation room, before dressing and walking back to Three Stories, once again taking the long way by the marina. 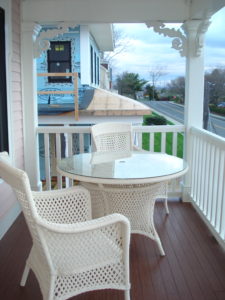 Sitting at the white wicker table and chairs on the large balcony off my small room, I snacked on a coffee-cake muffin from the B&B-like common area downstairs at the pink-painted, eight-room, child- and pet-free Italianate house.  Past the sparsely travelled street and the luxury Inn’s parking lot, dotted with cars and construction vehicles, the orange glow of the sun faded behind grey clouds above the blue water.  In contrast with the dark and empty building next to me, under renovation as another guest house for the Inn, the lit-up, mustard-yellow main building gradually shone brighter than the slowly darkening sky.

Though the balcony was far enough from the River not to feel the water’s chill, the air was starting to get cold.

So I went back inside, flipped on the switch to the gas fireplace at the foot of the king-size bed, and freshened up for dinner at the white sink a few feet from the large stall shower equipped with both an overhead spout and side jets.  Then I bundled up to walk again past the marina to the main building. 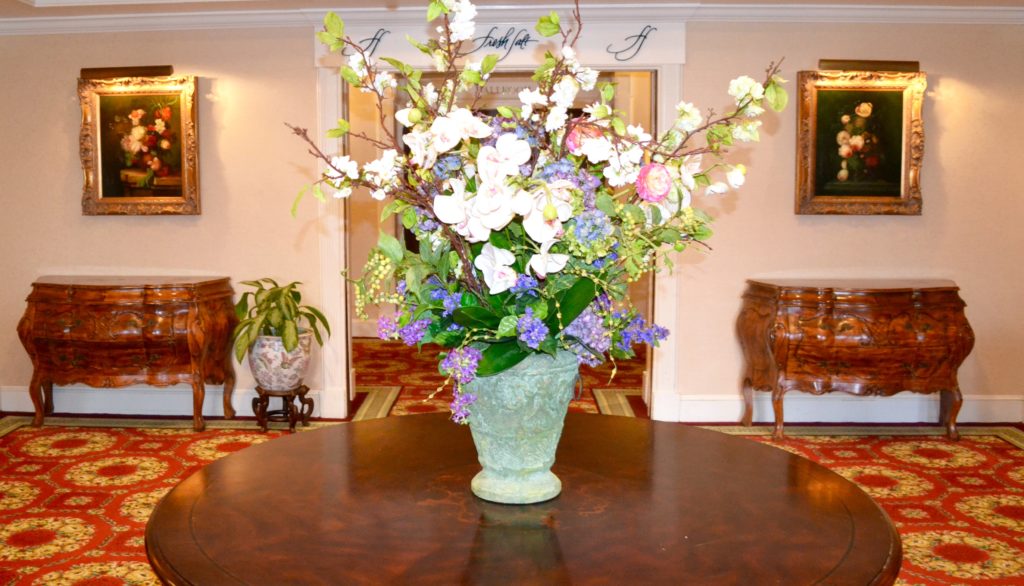 The sun hadn’t fully set, and golden light streaked through the large pane-glass windows overlooking the River as I settled onto a stool at one end of the micro-quartz bar at the Inn’s restaurant, Fresh Salt.  A well-heeled 40-something couple a few seats away sipped wine and chatted about the party they’d be hosting at the restaurant later in the month.

Opposite me, at the other end of the bar, a plaid-shirted, 60-something fisherman drank beer and complained about how big government makes it difficult for small fishermen to earn a living.  “They don’t make good laws,” he explained to no one in particular, and “the poor bastards are the ones who suffer.”

A grey-poloed 30-something swigged beer and agreed:  “It’s not like we’re dragging nets; we’re fishing with poles.”

“Fresh-caught fish is the only thing we can still get on this planet that’s natural,” the first fisherman exaggerated.

And it’s what I ordered for dinner.  Thick, moist, tender, set on a bed of eggplant puree, and topped with red-pepper piperade, the Georges Bank swordfish cheek was a rare delight.  The cheek is the pocket of meat below the fish’s eye; with its long extending bone, it resembles a lamb chop.  It’s more labor-intensive to extract than the steaks and requires careful attention because of the fish’s fine facial bones.  It’s also more richly flavored.  Fresh Salt’s chef Leslie Tripp, who grew up in Connecticut, studied at Le Cordon Bleu, and interned at the Place Vendôme Ritz, swaps other fish parts with neighboring chefs in order to obtain a supply of cheeks, explained Dave, the friendly and attentive bartender.  I’m glad he does.  Massachusetts is one of the leading swordfish-producing states, and sword is my go-to fish.  Chef Tripp’s was the best I’ve ever tasted.

Sated by the sword, I walked past the empty marina on the cold, dark night, savoring the sounds of the lapping waves and creaking gangways.  Be it ever so spooky, there’s no place like home.

To find and book fully cancellable tours and activities in Connecticut, click here.

To reserve a room at the Saybrook Point Inn and Marina, click here. 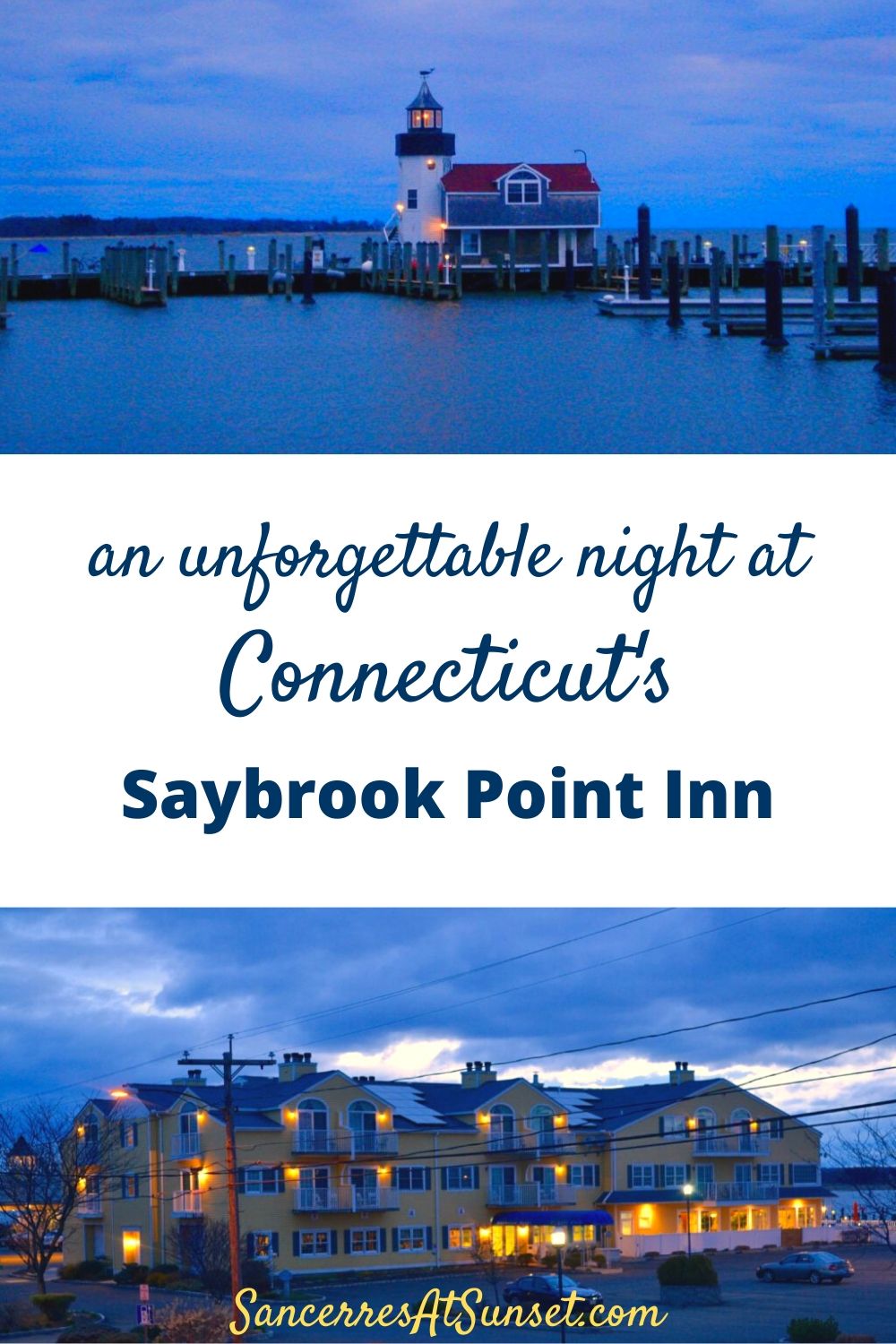 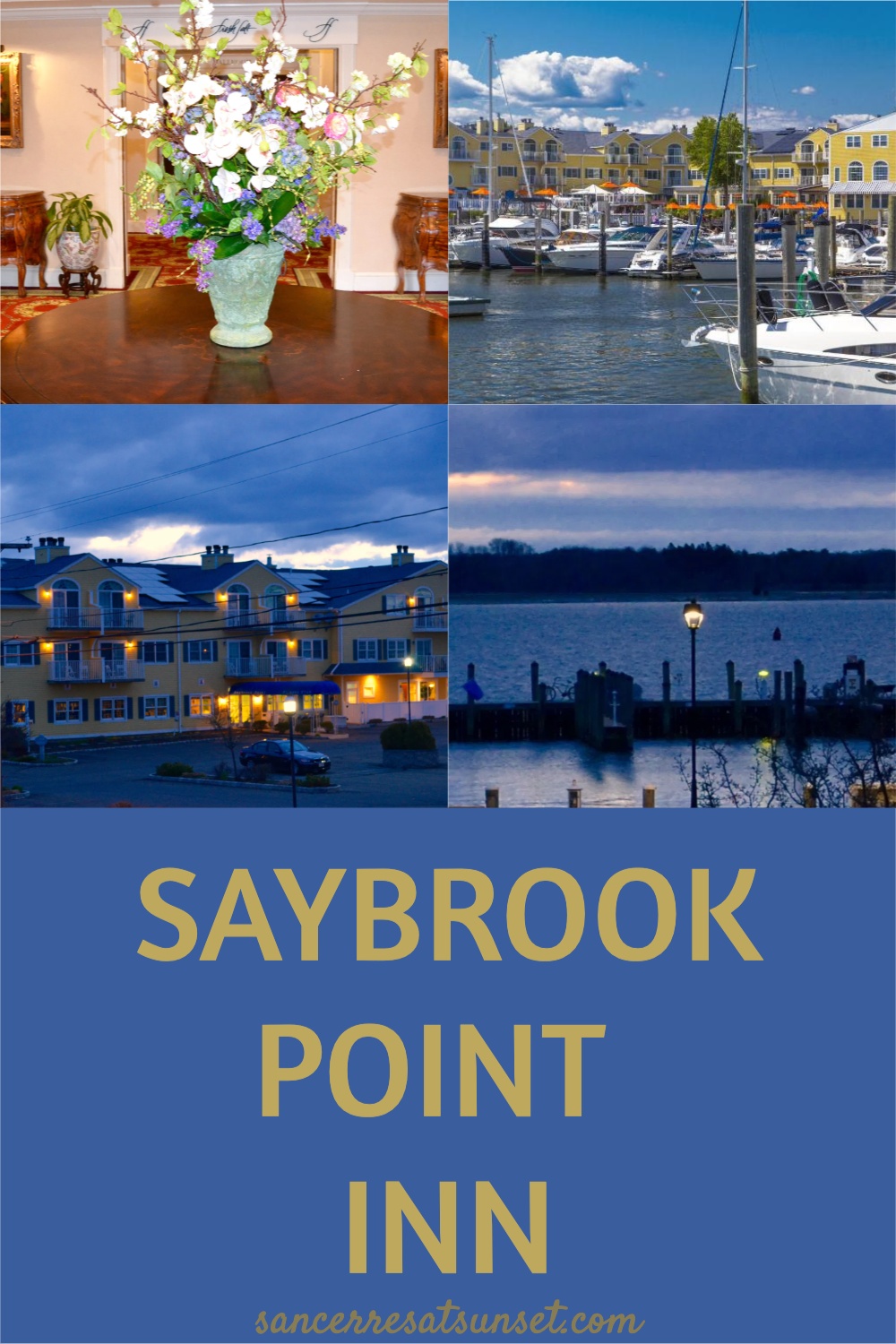 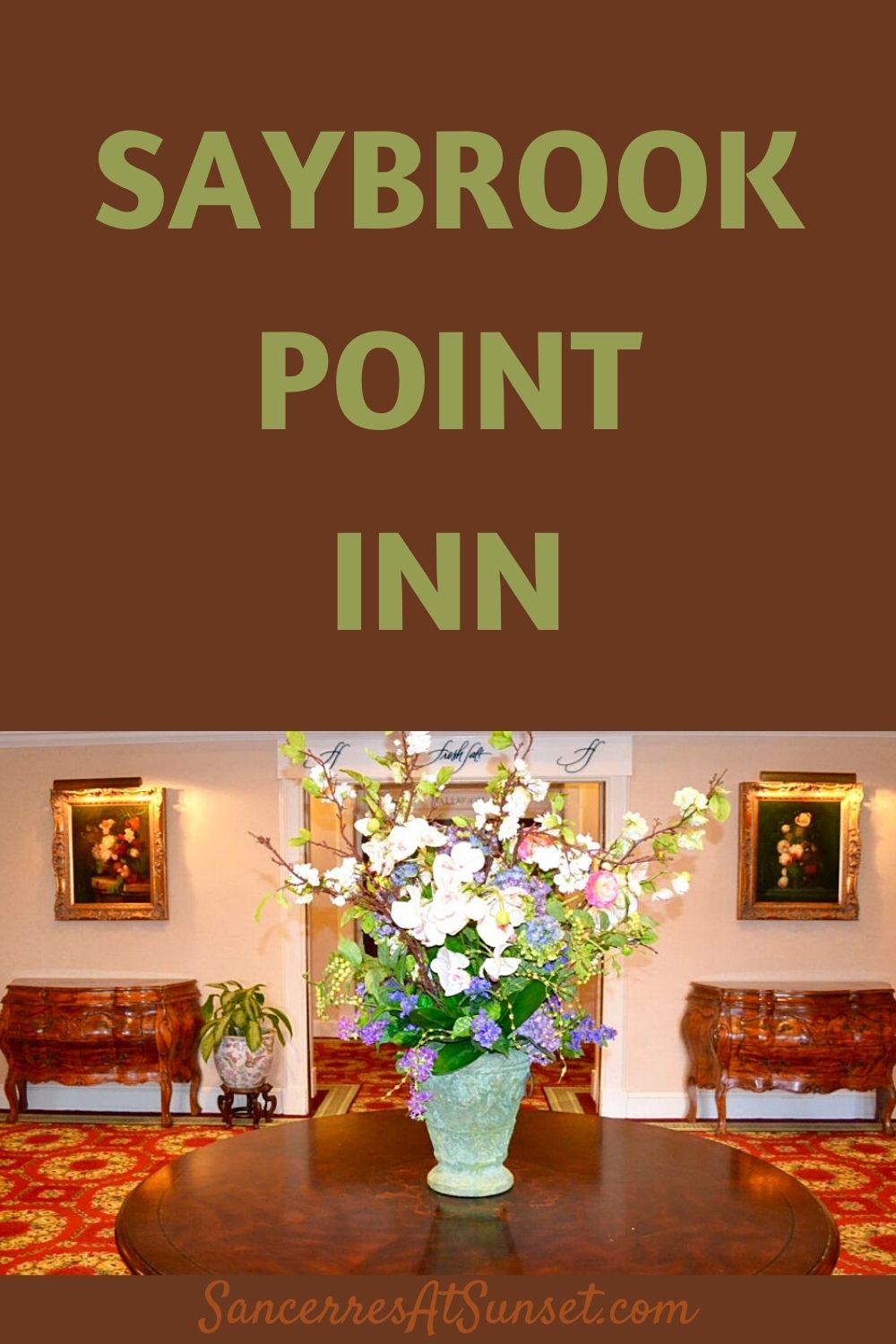 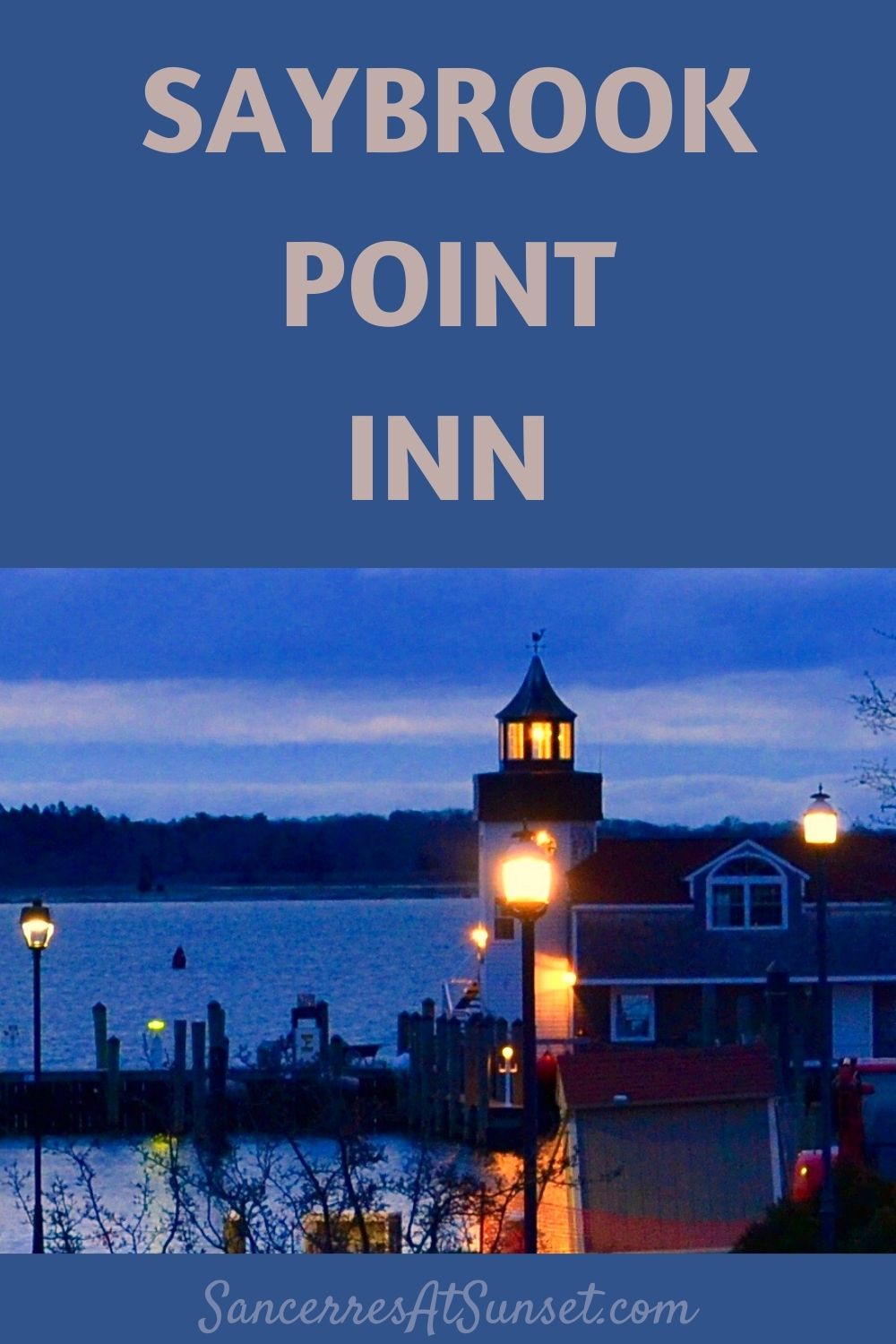