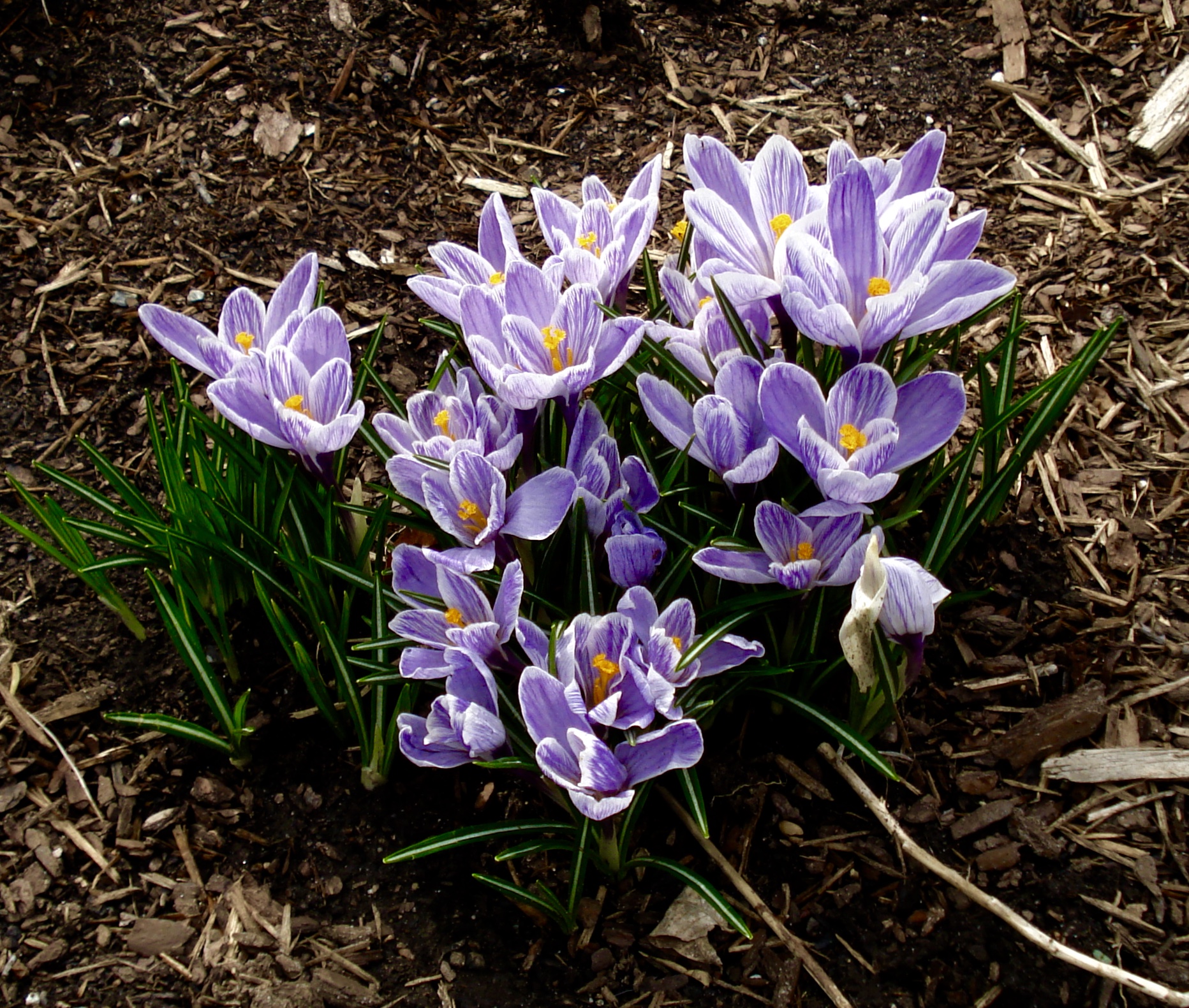 The large window dominated our cozy room at the Burlington Hilton.  The view of Lake Champlain was marred slightly by the dark rain clouds and the Patrick and Marcelle Leahy Center, but we could still see across the blue water to the blurry Adirondack mountains in the background.  My travel companion and I had decided to explore Burlington, Vermont, on our latest weekend escape from my house.

We borrowed an umbrella from the helpful desk clerk in the large open lobby and walked through the pouring rain to Bistro de Margot.  Sitting at the small bar, I noticed a Picpoul on the wine list; having loved the one at La Vasca, we ordered a bottle.  My friend ordered duck from the regular menu, and I chose salmon from the prix-fixe.  We both started with the veloute de cauliflower, which was delicious, smooth and velvety, creamy without being thick.  The salmon was good, and the duck was excellent, not at all greasy as poorly prepared duck can be.  My companion loved the tomato potatoes, mashed with marinara, that came with my salmon; fortunately, I didn’t.  Unfortunately, my prix-fixe dinner came with dessert, and even though I was only going to taste the small lemon tart in a jar, it was so good, sweet and tart, creamy and gelatin-y, that I finished the whole thing.

In the morning, we grabbed extra towels from the housekeeping cart to supplement the two that the Hilton had left us and then headed out for our walk along Lake Champlain.  It was a lovely stroll despite the grey skies and graffiti-covered abandoned rail cars proclaiming the city’s industrial past.  We walked down to the beach, passing two twenty-something guys drinking beer and smoking marijuana to a few yards from a 30ish man with his rottweiler off her leash. 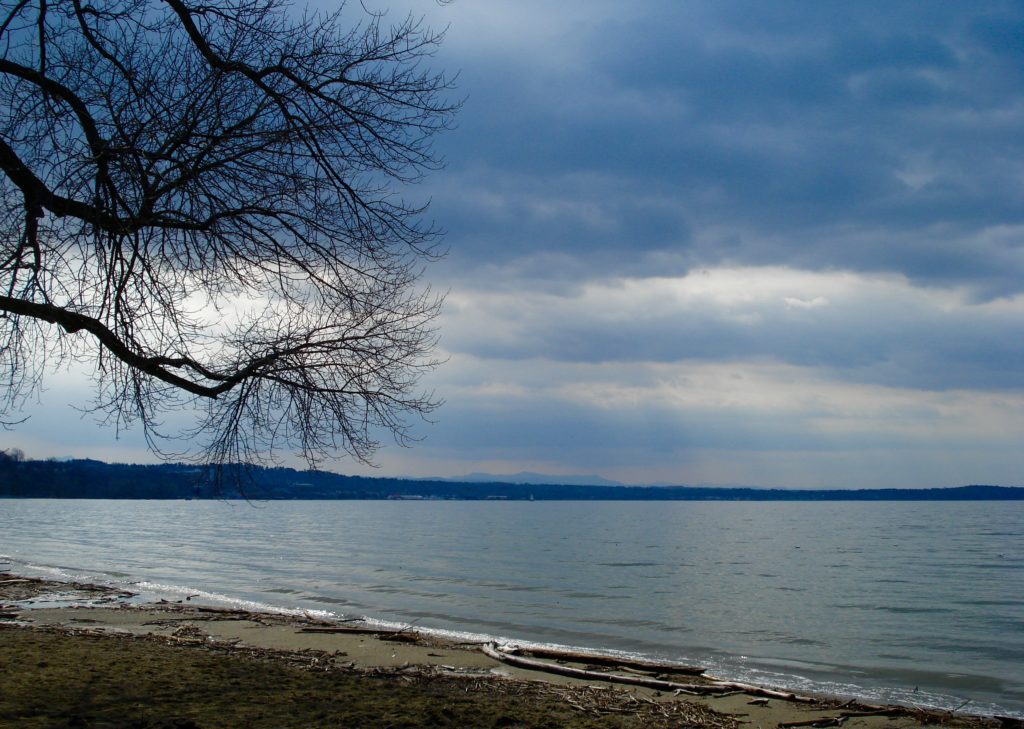 For lunch, we sat at the bar at Sweetwaters.  We asked about bottomless Mimosas, but the bartender informed us that all-you-can-drink is illegal in Vermont.  We started off sharing bacon-wrapped scallops, medium-size and al dente.  I ordered tuna, figuring that the accompanying Thai peanut noodles would be safe since I usually don’t like them.  My friend ordered steak, which unfortunately came with polenta fries; warm, crisp on the outside, tender and almost creamy on the inside, like Johnny cake sticks, they were better than fries we’ve had at a polenta restaurant.  And I liked the noodles.

After lunch, we strolled through the Church Street Marketplace. 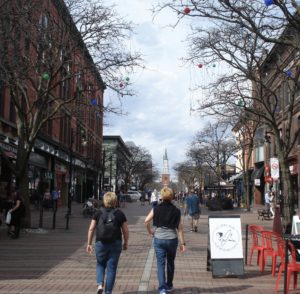 Unlike most city marketplaces I’ve visited from Jerusalem to New Orleans, which offer farm-fresh foods and tourist kitsch, this one features chain stores like Macy’s and the Body Shop, as well as a tattoo parlor and a tobacco shop. 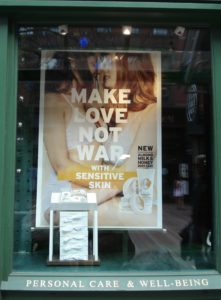 Plaques explain that the shopping district was enabled by federal tax dollars obtained by Senator Leahy and his Chief of Staff. 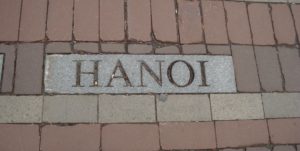 We passed a couple who looked like they’d had quite a few vegan pizzas holding a sign begging for contributions for their cat’s upcoming $15 vet appointment. 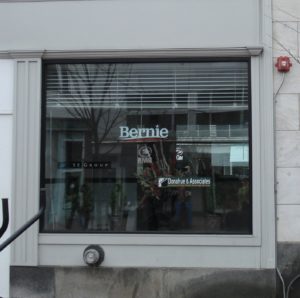 While Vermont’s other senator Bernie Sanders was bursting from a giant tub of Ben & Jerry’s, spring flowers were blooming from the ground. 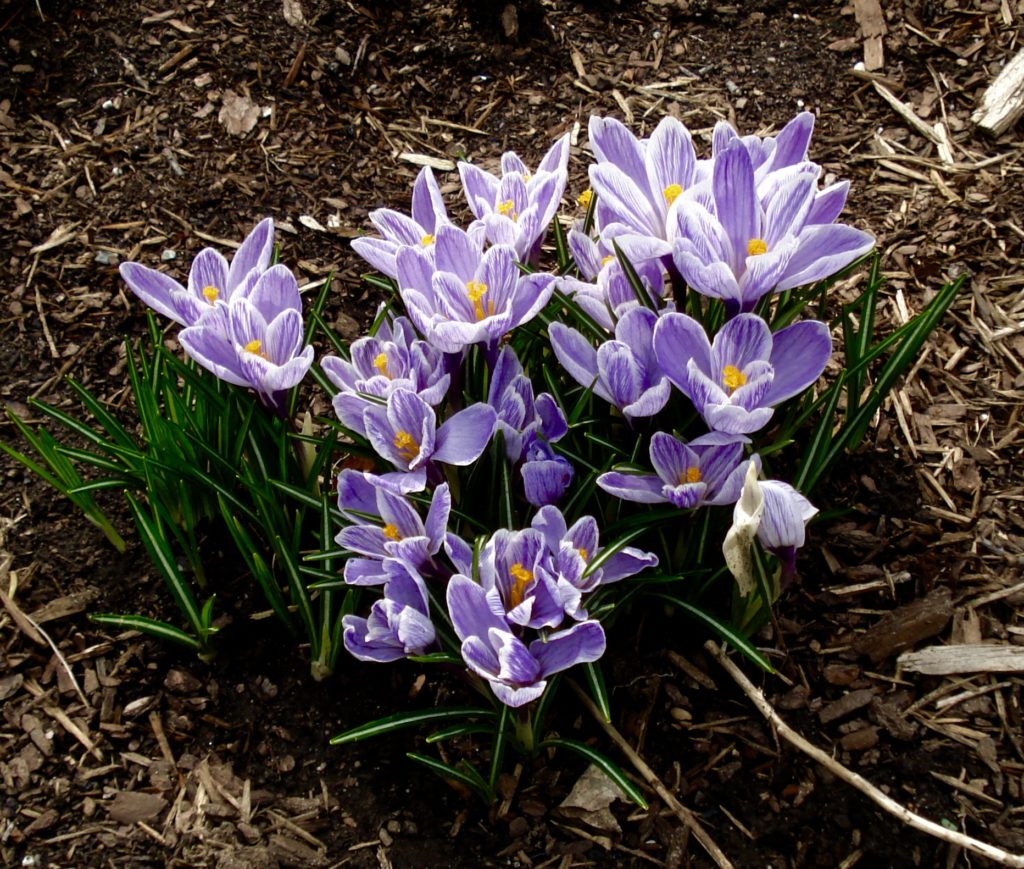 My friend stepped into CVS to buy sodas. 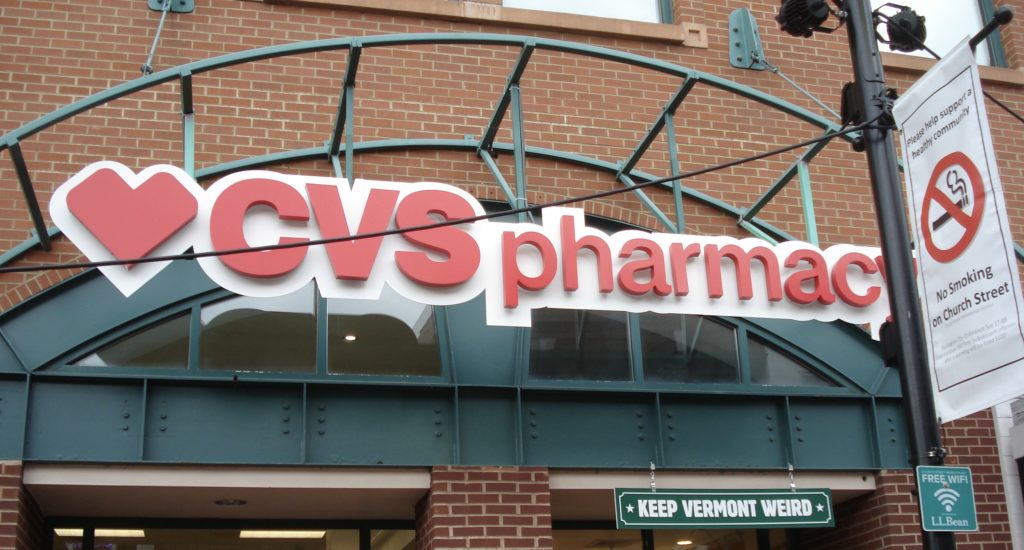 I went to sit on one of the red benches made to look like swings, but they were filthy—stuffed between the slats with trash and cigarette butts. 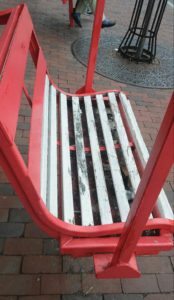 On our way out, the man with the vet-appointment sign was stuffing a wad of cash into his backpack.

We stopped to sip beer and wine on plastic chairs at a plastic table at Burlington Bay Market & Café, a combination liquor store, convenience mart, ice cream shop, and snack shack that reminded me of the ABC stores in Honolulu.  But the clouds and the Leahy Center conspired make the sunset kind of a bust.

We walked a couple of blocks to the rustic Hen of the Wood restaurant inside the stylish Hotel Vermont and sat at its large darkly lit bar under a ceiling of open wood.  We started with a carafe of Sauvingnon Blanc, almost Chardonnay-like in its butteriness but becoming crisper on the finish.  The Tonno di Maiale and the cheese plate we ordered came quickly, and my friend wanted to start with the ham, served in short shreds and liberally braised in wine and olive oil.  Neither of us usually cares for olives, but the green ones mixed in the innovative dish gave it a pleasant bite.

A group of four 30-somethings sat down on the stools to our left.  The two men wore plaid shirts, one red, one dark blue.  A thin woman at the end of the bar wore a grey knit top with a black vest.  The heavier woman next to me had a grey poncho, a brown hat, and one of those unpolished projecting voices of women whose mothers never taught them about modulation, which she used to declare her enjoyment of her Range Rover, because it allows her to “sit high”.

We finished the ham, which left our small plates coated with olive oil.  We waited a few moments to start the cheese, because we wanted fresh plates, and the bartender was busy with the high-maintenance group to our left.  Finally they ordered two and one-half dozen oysters, and we requested new plates.  The two cheeses were fresh and fabulous, balancing each other well, the triple cream smooth and the goat sharp.

With the group to our left yammering on about their dogs and their Instagram feeds as they slurped down their oysters, we decided to settle up.  Then my friend stepped away from the bar, and the group paid their triple-digit tab and left.  Upon returning, my friend’s face lit up at the sight of their empty stools.  With the bar’s pleasant atmosphere restored, we decided to linger over a couple of glasses of sparkling wine, which had a rich full flavor, made all the sweeter by the bartender comping them to thank us for staying.

We woke up to a bright sky on our last morning, and the view of the blue and white Adirondacks was clear across the sparkling lake during our walk.  But the hotel had an 11:00 check-out time, so I had to cut the walk short in order to scare up more towels and get ready to leave.

We were low on gas and looking for a place to fill up as we drove out past a TD Bank branch, where a lone woman held a sign declaring, “YOUR BANK FUNDS PIPELINES”.

7 thoughts on “Two Days in the Bubble”