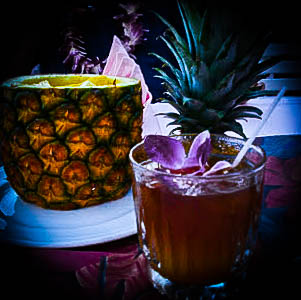 A traditional Hawaiian luau is a big party in someone’s backyard, usually celebrating a significant event.  Since my travel companion and I didn’t expect to be invited to one of those, we decided to go for beachfront affair with lots of food and entertainment and drinks with umbrellas.

So after loafing around the Hilton Hawaiian Village for most of our first full day in Waikiki, we headed over to the Royal Hawaiian hotel for its waterfront luau. 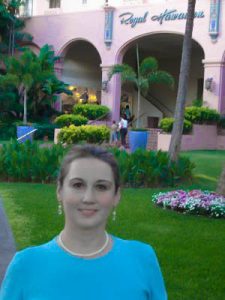 The luau line was already forming in the hotel’s lobby when we arrived around half an hour early.  At about 6:00, a grass-skirted, non-shirted male hula dancer welcomed us by placing orchid leis around our necks.  We accepted small mai tais; legend has it that a Royal Hawaiian bartender invented the tropically dark, slightly sweet, rum-based drink. 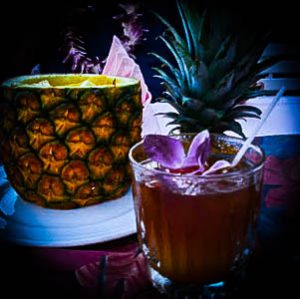 Soon we were seated with around eight other guests at one of about a dozen long tables.  As we sipped our high-octane drinks, the hula dancing began on stage, with Waikiki Beach as its back-drop.  The hula is like an island version of ballet; it’s a dance that tells a story.  Contrary to the image created by Elvis Presley movies, it wasn’t originally the hip-shaking dance that most mainlanders picture.  That dance actually comes from French Polynesia, a group of islands about 2,000 miles south of Hawai’i, and a leading contender for my next big vacation.

The dancers performed a hukilau hula.  This popular version of the dance depicts fishermen hauling in their catch; to me, it also symbolizes the island gift for celebrating life, even at its most mundane.  I was born on the north shore of Massachusetts and lived in that maritime area throughout my young childhood, and I never heard of anybody choreographing a dance that celebrated reeling in fish.

We also witnessed a lesser-known hula–one glorifying the Royal Hawaiian.  The so-called “Pink Palace” opened in 1927 and is the oldest hotel in Waikiki.  Its history and elegance exude a charm that partially balances the crude self-backpatting and puts the hotel high on the potential lodging list for my next trip to Honolulu.

The MC invited guests to join the dancers on stage and learn a few hula steps ourselves.  My travel companion and I, along with most of the crowd, enjoyed this part of the event as spectators.  One of the younger hula students was clearly not enjoying himself; the little boy walked off the dance line, sat at the edge of the stage, and started reading a book.  A child after my own heart, he provided one of the most entertaining moments of the night.

The main dish at any luau is the kalua pig–pork pulled from a pig cooked whole in an underground oven, called an ‘imu. Unearthing the pig is a major part of a luau–except in Waikiki, where zoning laws prohibit the use of ‘imus.  We did, however, get to see the gutted pig, roasted snouty face and all, lying on a buffet table.  Pulled pork is one of my favorite meals, and the kalua pig did not disappoint–moist, tender, delicious!

Another traditional dish at the the buffet was lau-lau.  One thing that backyard luaus probably don’t feature is someone describing every dish.  Fortunately, ours did.  Lau-lau, the MC explained, is ti leaves, wrapped around taro leaves, wrapped around meat or fish and steamed.  I was happy when he said that pork was at the center of our luau’s lau-lau.  And it was fun getting there.  Ti leaves are inedible, so one must untie their stems and gently shake the interior leaves and meat out, the way you’d separate static-stuck clothes from each other.  I shook and shook, deposited my ti leaves on a tray, and bit into the leaf-wrapped pork.  And, well, I’m always glad when I’ve tried something new, but let’s just say lau-lau is a no-no to my taste.

Taro is also the root ingredient in poi.  Often described as a paste, the purple dish actually has more the consistency of sauce.  It’s the main starch in the Hawaiian diet.  It didn’t taste anything like lau-lau.  In fact, its bland flavor didn’t taste like much of anything.  I thought it was just so-so.

Overall, it was a good dinner in a beautiful setting.  I loved sitting in the open air, listening to the island music, immersing in another culture.  Travel is about being transported mentally as much as physically, and the Royal Hawaiian luau helped season us for the week ahead on Oahu.  And I’m glad I sampled Hawaiian food, though I think I still prefer my pulled pork with barbecue sauce, cole slaw, and hush puppies.

The luau wrapped up fairly early, around 8:30, fine with us, as that’s 2:30 in Virginia.  We walked roughly a mile back to the Hilton and crashed–planning to arise at 4:00 for the next main visit on our agenda–Pearl Harbor.

What to know before you go to the Royal Hawaiian Luau:

The Royal Hawaiian is a historic luxury beachfront hotel at 2259 Kalakaua Avenue in Honolulu.  As well as the luau, its amenities include: 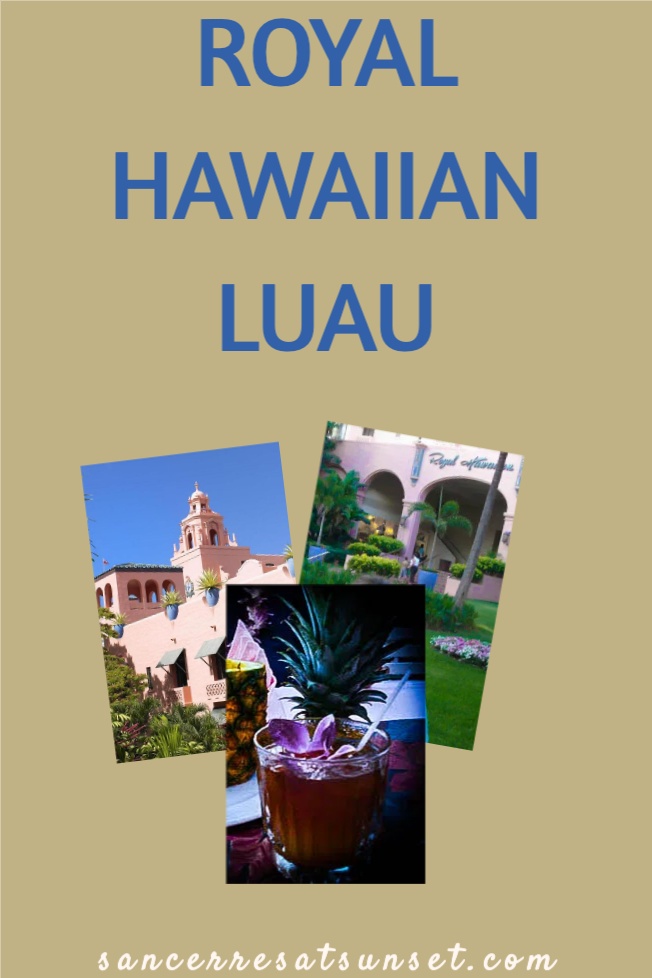 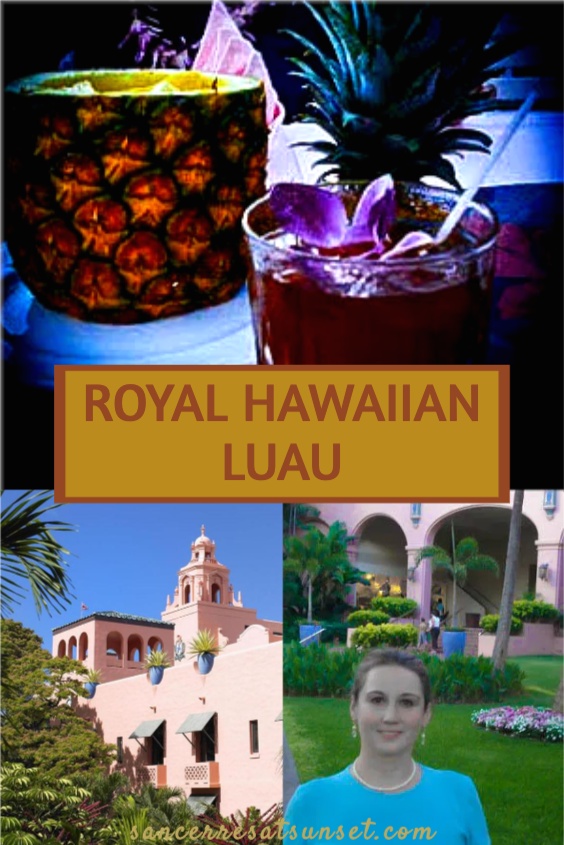 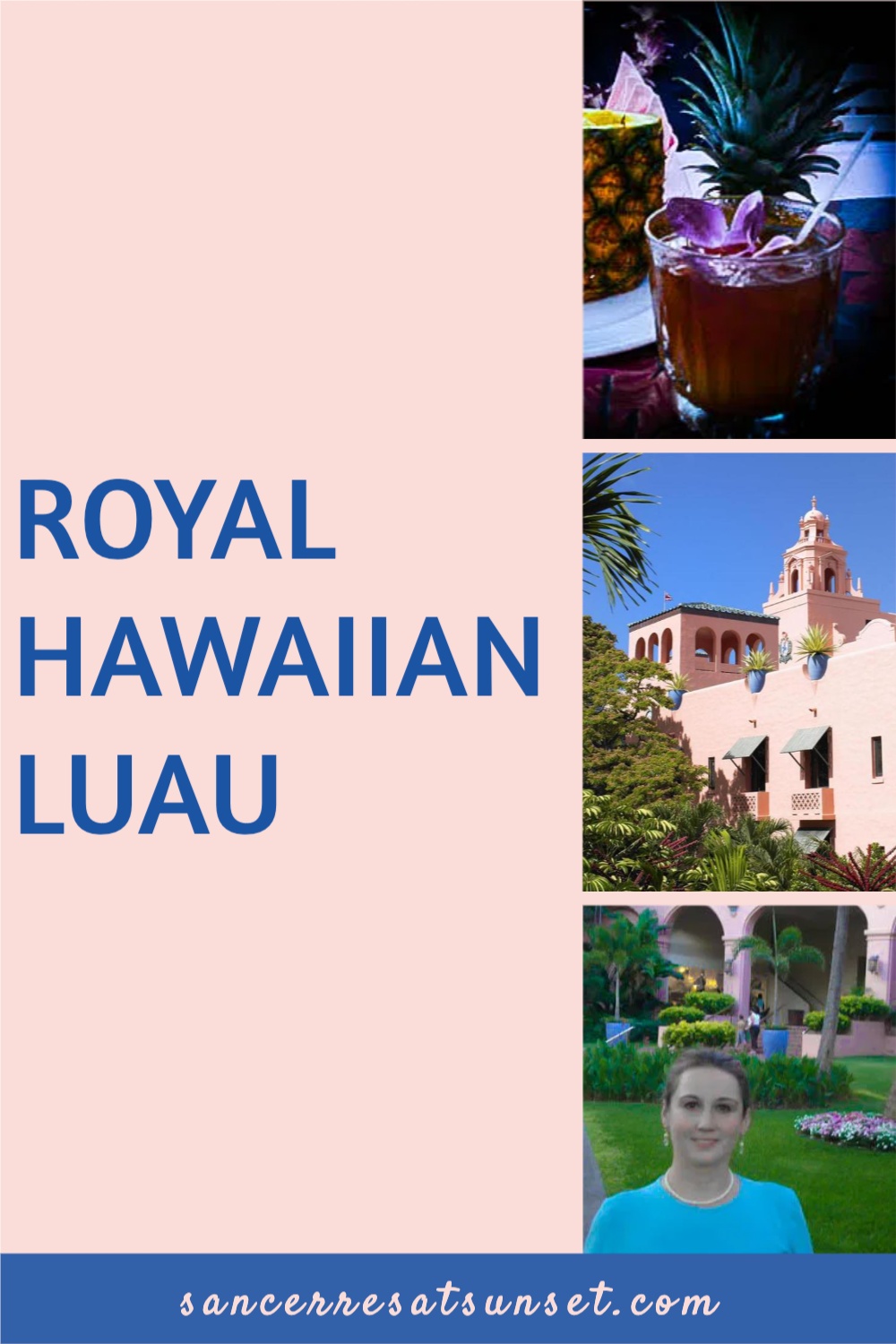 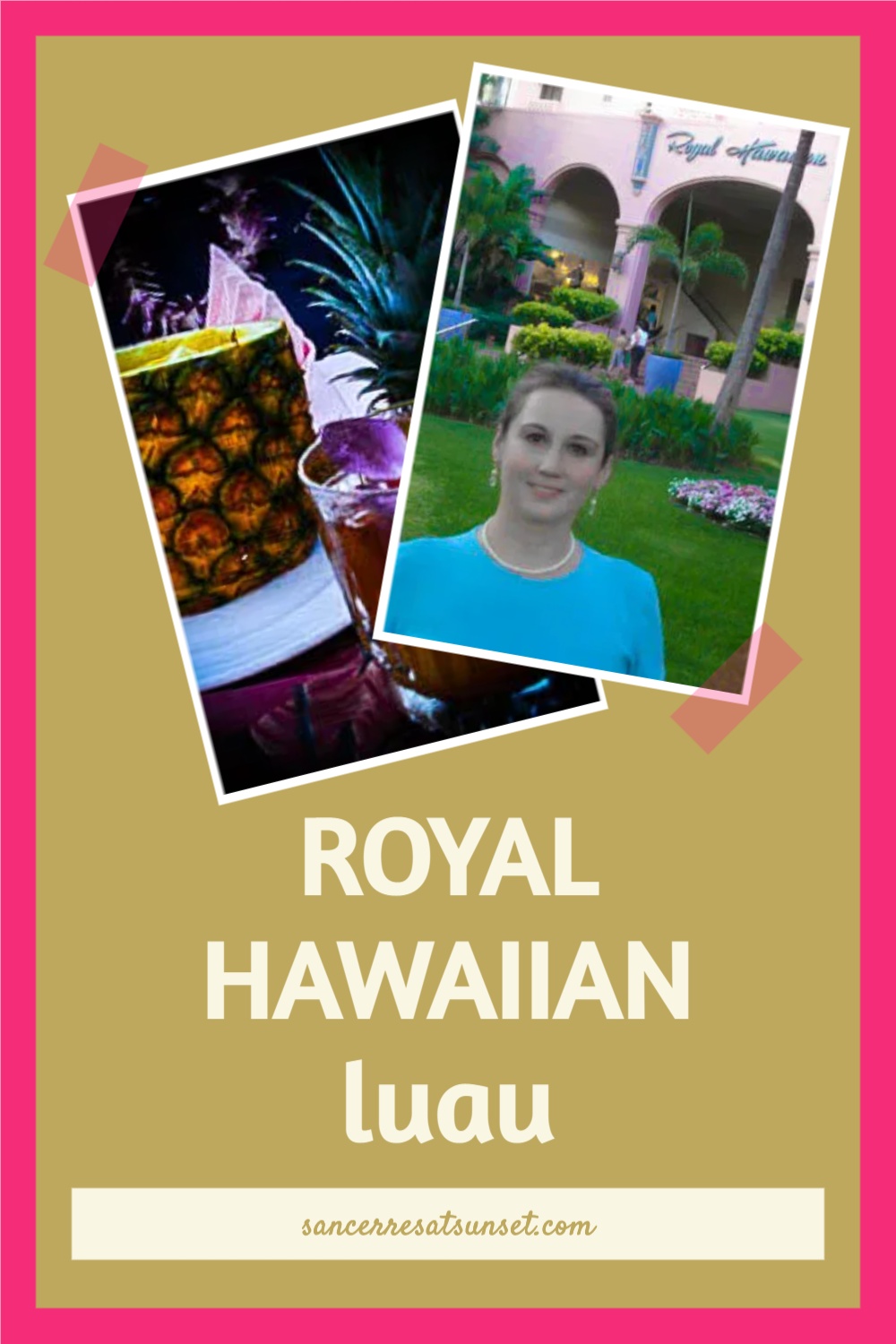