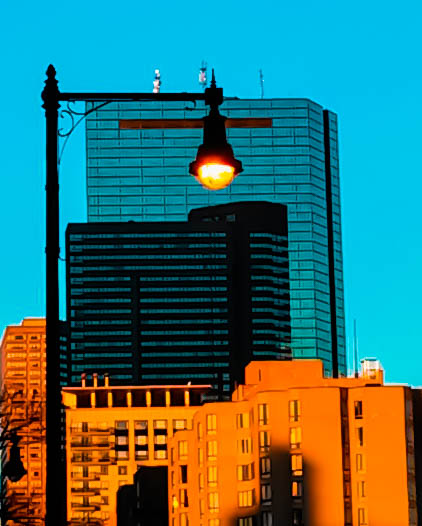 With my home renovations underway on a much less consuming schedule than the demolition, I was able to Uber into Boston for a weekend stay-cation with a friend.  I was delighted when the InterContinental let us check in mid-morning, and it was a relief to get away from a house with no habitable living areas to an upgraded room with a view of the Tea Ship floating on the Harbor.

The view the other way had a more familiar feel. 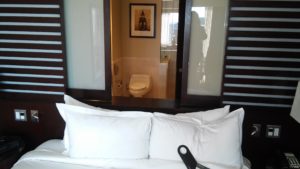 We went down to breakfast at the hotel’s comfortable Miel Brasserie Provencal, where I enjoyed an avocado smash, light and tasty with its soft poached eggs and tangy goat cheese. 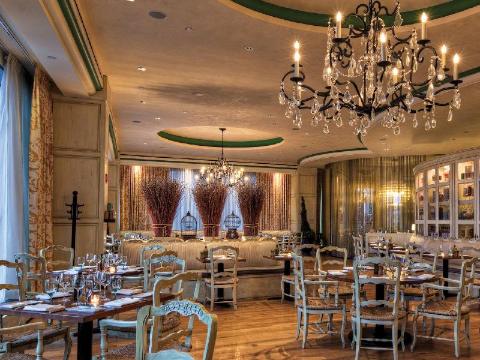 I wasn’t as good about limiting carbs as I was along the Gulf Coast, and I did eat half the whole-grain toast.

It was the day before the 247th anniversary of the Boston Massacre, but extreme cold forced the cancellation of an outdoor commemoration of the night when angry colonists threw snowballs at British soldiers stationed to quell resistance to the unpopular Townshend taxes and the soldiers opened fire into a growing crowd, killing five. 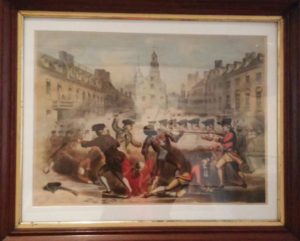 But the crowded Old State House was hosting a highly simplified indoor reenactment of the trial of eight soldiers. 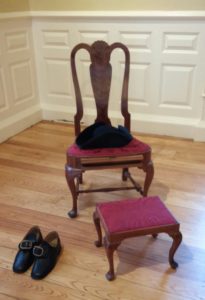 Perusing the museum artifacts beforehand, we chatted briefly with prosecutor Robert Paine and wished him luck.  It’s not a matter of luck; it’s a matter of evidence, he assured us.  Soon inside the courtroom, a staffer selected young and not-so-young audience members to play small roles in the performance, while Mr. Paine reviewed his evidence at the prosecution table, beneath a portrait of Gov. Thomas Hutchinson and beside a glass of madeira. 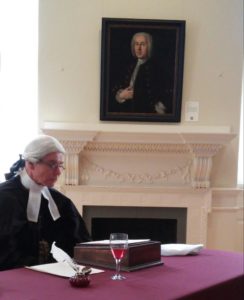 At the defense table, John Adams had a glass of water.

Even so, Mr. Adams had the better day.  Six of the soldiers were acquitted; two were found guilty of manslaughter.  The good news for these two was that they could read, and so they were able to invoke the “benefit of the clergy” and thus get their sentences reduced.  The bad news was that the sentence reduction meant being branded on the thumb with the letter “M” for murder.  My own thumb and finger still feeling the effects of being briefly burned a month earlier, I thought I might have chosen hanging, but the two children playing the convicted soldiers didn’t even flinch.  Meanwhile, in real history, Parliament revoked all the Townshend duties except the tax on tea.  But that’s another story.

Next we walked through Quincy Market, stopping in the Cheers shop and snagging samples of clam chowder along the way, because Boston.  Thus primed for clam chowder, we Ubered to the Barking Crab, a popular family favorite, where we each started with a bowl as we perched atop three-legged stools at the red wooden bar.  Unfortunately, they had Downeast, my favorite draft cider, and not being John Adams, I ordered a glass.  Then we split the tuna tartare, fresh and comforting with cream cheese spread among its layers.  But the night wasn’t going to get any warmer, so we walked back to the hotel via the Moakley Bridge over the Fort Point Channel.  I love that dirty water.

Our plan was to drop off our coats and spend a few minutes relaxing in the room, but the lobby Rumba was so crowded that we quickly snagged the last two studded red-leather stools and ordered a bottle of Chandon Brut, slightly spicy with flavors of fall fruits.  We decided to split the fork-tender short rib, one of my favorite cuts; I avoided the polenta but savored the hearty onions, carrots, and turnips.

In the morning, I was in the mood for a city-view breakfast.  A Google search showed that Taj Boston hadn’t opened its roof-top brunch for the season yet.  I tried to make a reservation at Top of the Hub, but their online system wasn’t working, and I got voicemail when I called.  I gave up on the whole view idea and booked a spot at City Table in the Lenox Hotel.  The place is so popular that it was hard to make conversation as my friend dodged servers’ jabs in the back at our two-top half-booth sandwiched near the front.  I ordered an omelet with bacon and chose whole wheat as my side bread so that I wouldn’t be tempted to eat it.  But after I sent back the ham omelet the waiter delivered, I spread half a piece of toast with Dickinson’s strawberry preserves so that my friend’s steak-frites wouldn’t get cold.  I also snagged a couple of fries.  Meanwhile, my friend tried to pepper the steak, but the shaker had been loosened, and our tiny table was suddenly awash in coarse black powder.  Eventually, the waiter cleaned up the mess and replaced both the shaker and my omelet, and the rest of the meal proceeded uneventfully.  Afterwards, we spent a few minutes checking out the boutique hotel’s cozy lobby, awaft with the fresh scent of its Beekman 1802 display.

Acoustics were far better when we settled into original 1900 leather seats at Boston Symphony Hall for a concert of the Handel and Haydn Society, which was playing neither of its namesake composers.  Nor were they playing Beethoven, the only composer whose name is etched in marble above the orchestra stage, because his was the only name on which the original directors could agree.  Evidently standards are a bit broader for historical and mythical figures, as sixteen marble replicas of Greek and Roman statues listen from the upper level of the Hall’s walls.  The reason that drew us there, apart from the cold, was my love of the graceful playfulness of Mozart, whose Linz Symphony was being performed.  But a surprise was the elegant Symphony in D Major by Juan Crisostomo de Arriaga, whom I’d never heard before but thoroughly enjoyed.  And my favorite of the day was the dramatic selections from Gluck’s ballet Don Juan. 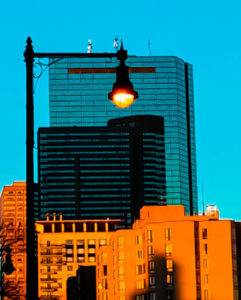 Just before dusk, it was back out to the familiar streets of Boston, into an Uber, and on to the North End.

Strega’s dining room was crowded, but we scored two stools at the small marble bar and ordered a couple of glasses of warming Chianti.  Behind us mafia movies played on five small screens.  In the center, young Vito soon-to-be Corleone’s mother pled for his safety.  Unfortunately, like a pair of BSO directors faced with an embarrassment of riches, we couldn’t agree on any of the menu options from Rollatini di Nino to Branzino Cileno, so back out into the cold we went.

We meandered through the North End, passing by the Old North Church, and settled on L’Osteria.  We sat at a four-top along the side of the large open dining room, several empty tables from what looked like a small group of locals near the front and a large family of tourists in the back.  We ordered a bottle of Chianti, and I started with the Stracciatella.  I was much in the mood for eggplant, but as I perused the basic red-sauce menu, it all came breaded, so I chose the Caprese salad, the classic tweaked with another of my favorite veggies, roasted red peppers.  And mozzarella makes everything better. 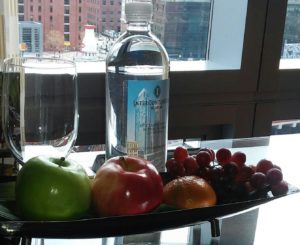 In the morning, I grabbed a few grapes from the fruit tray the InterContinental gave us and Ubered back to my current reality. 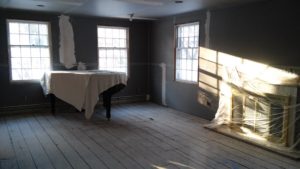 To find and book fully cancellable activities and tours in Boston, click here.

To reserve a room at the InterContinental Boston, click here. 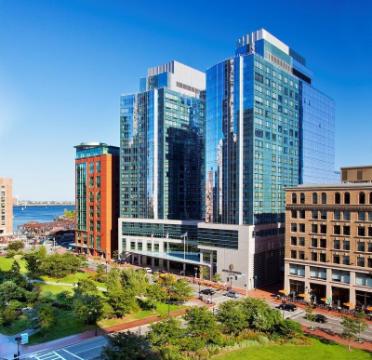 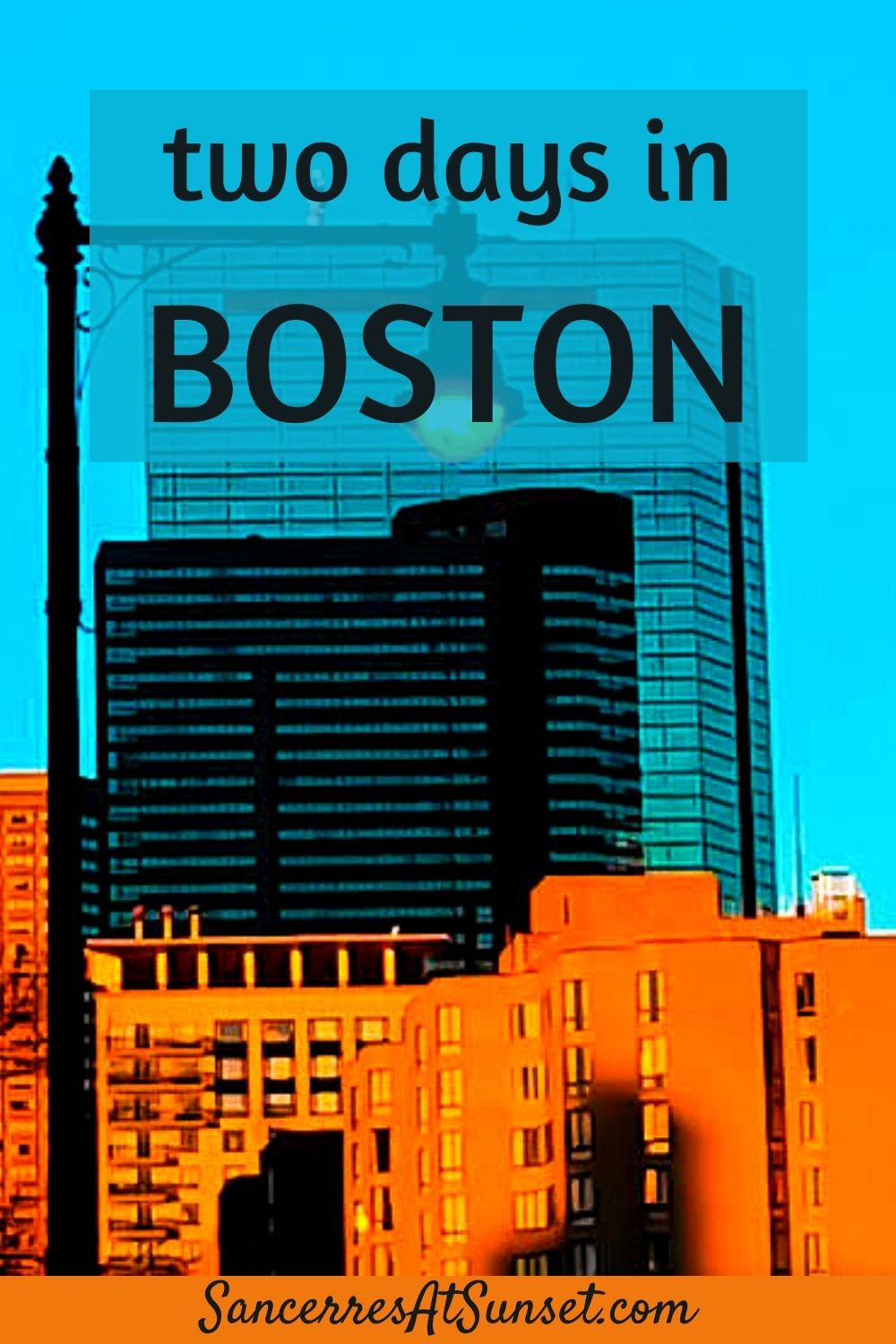 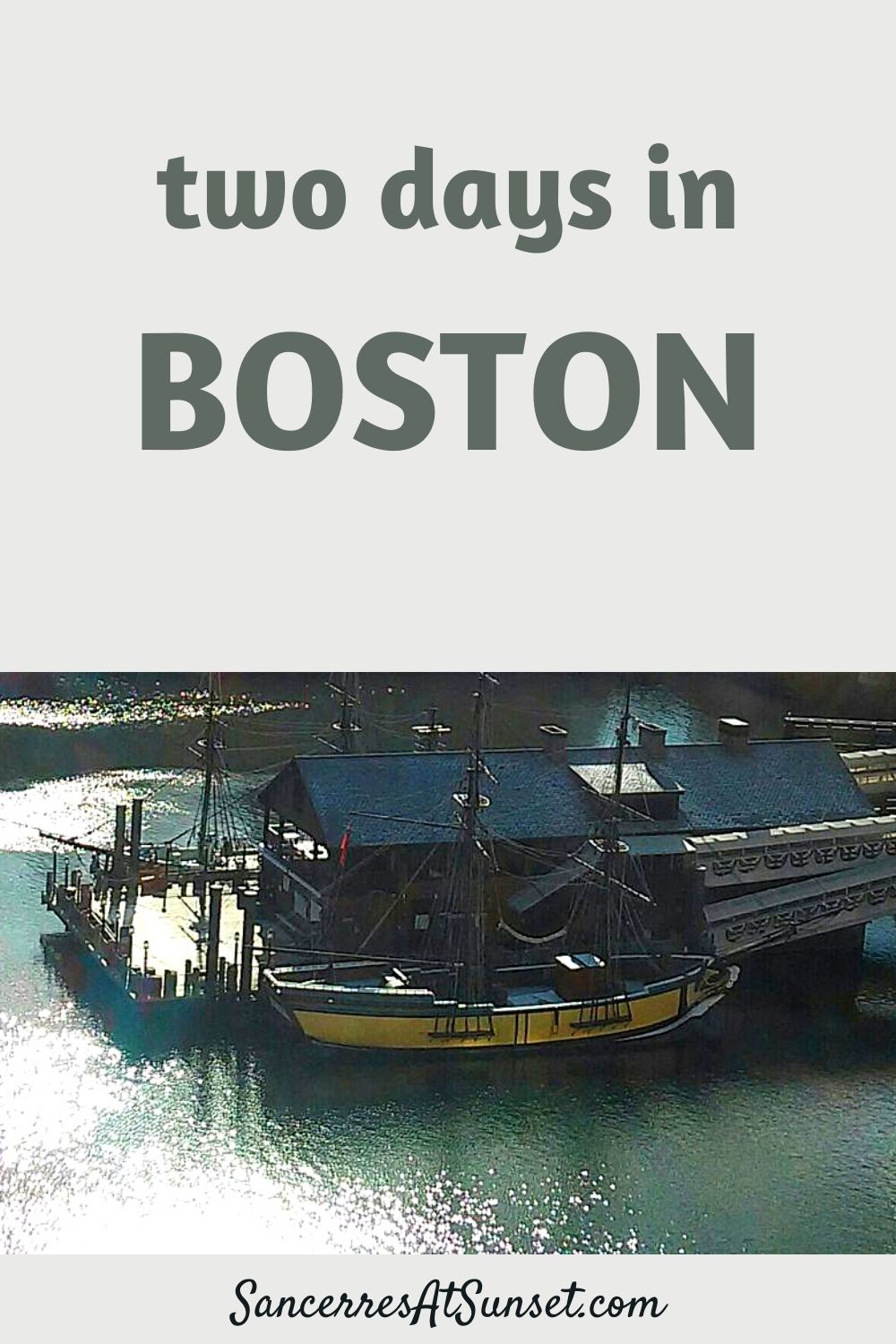 3 thoughts on “Two Days in Boston”