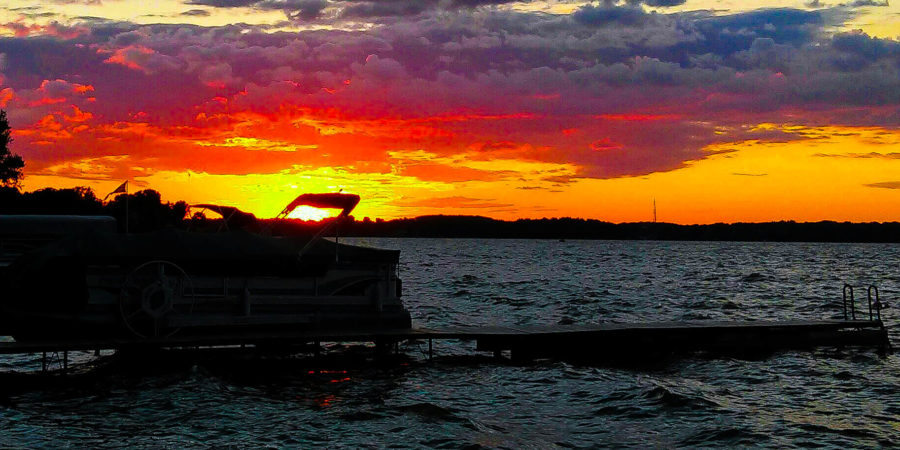 You know it’s bad when you’re glad to be sitting on a plane from Las Vegas to Milwaukee, because it means no one can reach you for a few hours.

On our last afternoon in Vegas, our realtor messaged me several times.  The bad news:  Another realtor had managed to lose our key, and the house couldn’t be shown until I came home.  I gave her the name of a locksmith and told her to find him.

The good news:  We had an offer on the house.  But the buyer wanted an answer in four hours.  I thought that was ridiculous:  I wanted our lawyer to review the offer, and I’d be travelling most of the next day.  The buyer extended the deadline to 48 hours.  Our lawyer made some suggestions the next morning, and I mulled the whole thing over on the plane.

Sure enough, as soon as we landed in Milwaukee my phone dinged with a message from our realtor:  She couldn’t reach the locksmith, so I should go home and put my own house-key in the lockbox.  I told her to find another locksmith.

We deplaned, picked up the rental car, and drove two hours to some friends’ house on Lake Kegonsa.  I was especially looking forward to the next day’s planned ride on the pontoon boat.  I was glad we had until 6:00 to get the deal finalized; I could get it all done and still be a good guest.

Of course the day started with a walk.  One of our friends mentioned a Norwegian Heritage Center she wanted someone to visit with her; I said I’d be happy to go along.  As it happened, my Norwegian relatives were having a big family party the next day at a house they’d rented in Gloucester during their every-few-years visit to America.  But the renovation of my house had kept me away from my companion so much this winter and spring that I agreed to travel instead.  I thought maybe the museum would help me feel close to my family. 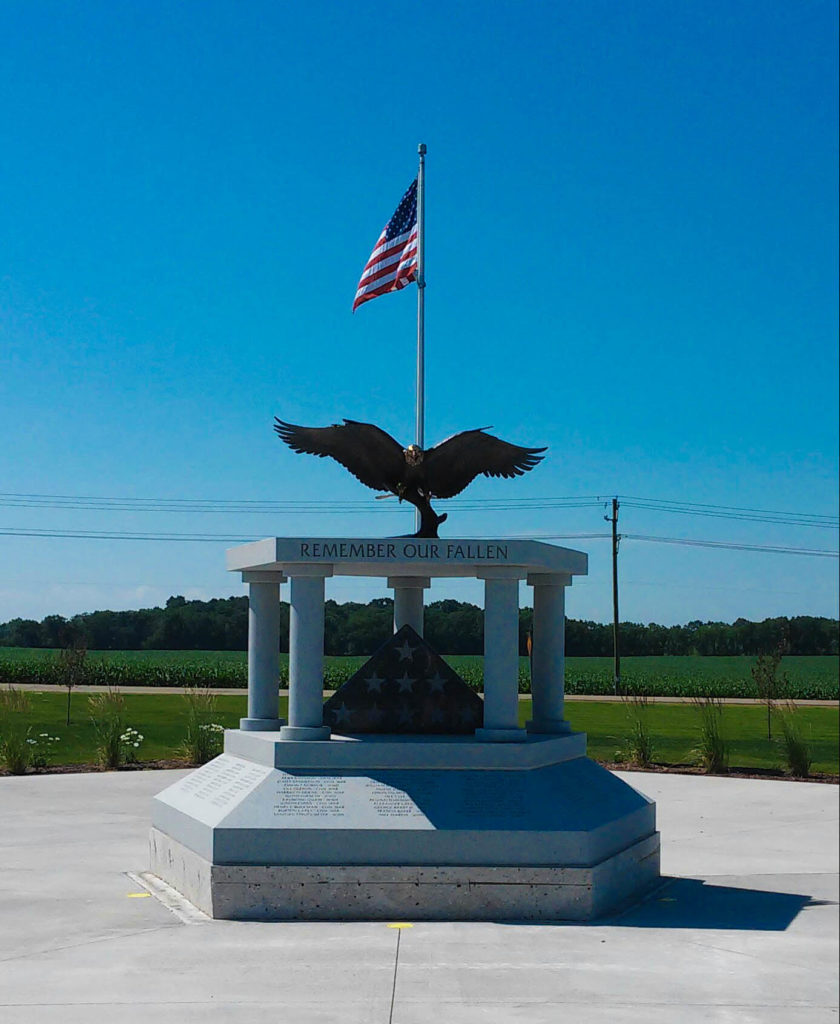 We were exploring a surprisingly elaborate local war memorial when my phone dinged with another message from our realtor.  The buyer was getting antsy:  Why hadn’t he heard?  This is a good offer.  Blah blah blah.  He pushed the deadline back to 4:00.  I should have told him to drop dead.

I cut my walk short and went back to negotiate.  We reached a verbal agreement, but the written contract our realtor sent back was substantially different from the one our lawyer had reviewed.  I balked.  My friends came back.  They said they’d wait for me, but I didn’t want to hold things up, so I told them to go out on the boat without me.  I sat alone on a dark leather couch in the living room, crying from the combined stresses of trying to handle the deal responsibly and feeling terrible about being a bad guest.  I wiped my face and found a locksmith.  My friends brought me a salad and went back out on the boat.  I couldn’t eat.  Our realtor and I argued over the contract.  Finally we got acceptable language drafted and approved by our lawyer.  I received a correct contract and e-signed it.  My friends came back; my companion asked whether I’d done laundry.  I took a shower, dressed for cocktail hour, put the laundry in, and force-fed myself half the salad, because I can’t drink on an empty stomach.

We went out to the wooden boathouse for drinks above the lake.  Sitting at its large round table between the mini-fridge and the wood-stove, I tried to contribute good conversation and compensate for being a bad guest.  Our hosts were very gracious and understanding about my situation, congratulating me on getting the deal done.  As we watched a spectacular red/orange/yellow sunset over the darkening blue lake, it was like the stress was sinking with it.

The next day was much better.  Some other friends were coming over for a cook-out, so I did what I could to help in the kitchen.  I always try to help a hostess prepare food because 1) that’s how my mother raised me and 2) I’m confident enough in my culinary ability to think I’m making a welcome contribution to others’ enjoyment.  Our friends arrived, and we all went out on the boat.  Then we sat on the back porch and gorged on grilled meats and chilled salad.  Our hosts had remembered that I like rib-eye and made sure to have plenty; it’s amazing what balm a simple act of consideration can be.  Later, we went back to the boathouse.  I laughed myself to tears as we watched a video of Family Feud’s silliest bloopers.

In the morning, I sat in the living room, reading Food & Wine, relaxing and feeling my frayed nerves being resealed by the calm quiet.  My companion tasked me with suggesting somewhere to go later and went out for a walk.  I put the magazine aside, pulled up a map of Wisconsin, and searched for a promising place on the way back to Milwaukee. 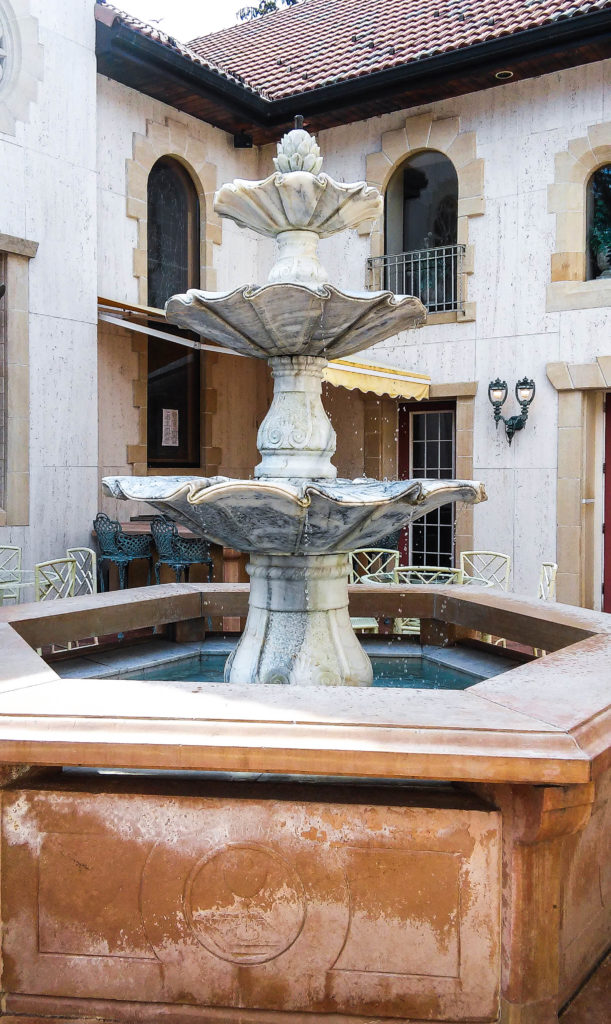 Golden Mast Inn is a midwestern mishmash of Bavarian haus, community center, coastal cottage, and hunting lodge.  Passing the stone fountain in the tiled courtyard, we entered into a long hallway.  We came face-to-face with an easel holding a sign wishing Big John Weissgerber a Happy 100th Birthday just outside a large room set up with round tables and banquet chairs.  Hans Weissgerber had escaped post-War Yugoslavia, settled with his wife and two sons in a refugee camp in Germany, and applied for legal immigration to the United States.  The family moved to Milwaukee in 1956 and opened the Golden Mast in 1967.

But he didn’t invite us to his birthday party, so we sat on sturdy wooden chairs at a white-clothed four-top and looked out at Lake Okauchee, crowded with boats on the clear bright afternoon.  My friend ordered Wiener schnitzel, which was tasty and enormous.  I went with the elk medallions.  I hadn’t had elk since I visited Montana five years, two remodellings, and mountains of stress ago.  It’s hard to find on the East Coast, which is unfortunate, because it’s tender, richly flavored, high in protein, and leaner than chicken.  Golden Mast’s did not disappoint, and was well complimented by the peppercorn sauce, substantial enough to stand up to the meat without overwhelming it.  I did undo some of my good carb karma by eating too much of the accompanying spaetzle. 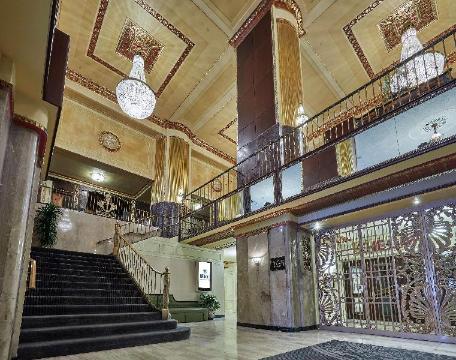 We checked in to our good-sized room at the old-school Milwaukee Hilton and went out for an evening stroll along Lake Michigan, the largest lake entirely within the United States.  The air was warm and muggy, but the sky was clear and blue.  White sailboats hugged the shoreline as joggers, bicyclists, and stroller-pushing parents breezed by. 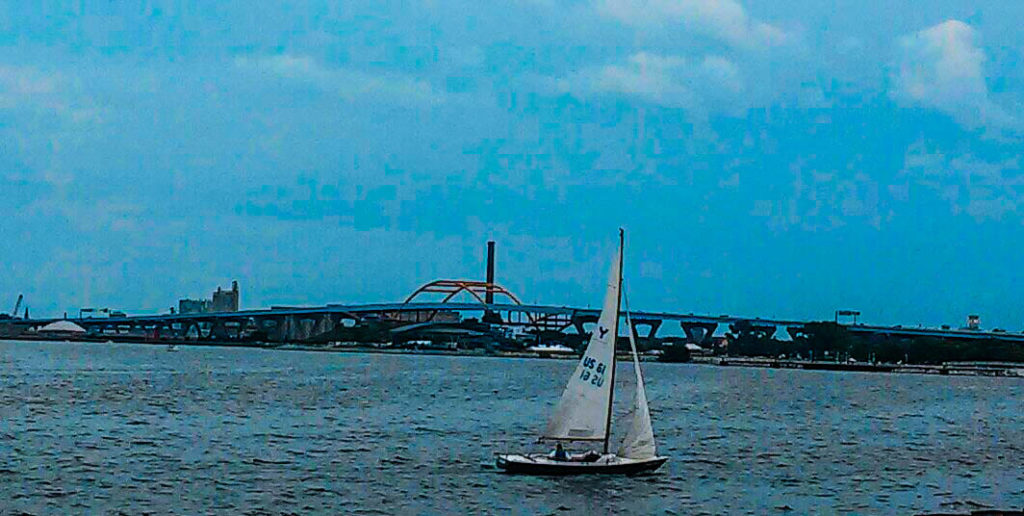 On our way back to the hotel, we passed that universal staple of summer in a city, a free outdoor production of a modernized Shakespeare play, in this case the Bard’s battle-of-the-sexes comedy Much Ado About Not(h)ing, plucked from Sicily and plopped somewhere in the Caribbean.

The morning broke inauspiciously rainy but dried out by the time we reached McKinley Marina for a 90-minute sail.  As we headed out along the Lake, sandwiched between the grey sky and blue water soared the coffee-and-cream city skyline, behind low green trees, seemingly sliced by the bare masts jutting up from white boats.  The famous “wings” on the Milwaukee Art Museum drifted upward.  The wind was good for sailing; the air was cool.  I’ve always loved the elemental luxury of sailing–the wind ruffling my hair, the water spritzing my face, the minimalism that makes room for everything you need.  But I think most of all, I love the sense of escape, of leaving both quotidian and exceptional worries behind, if only for an hour.  As the land gets smaller and smaller, so it feels do problems and pressures.

My companion loves thin-crust, square-cut, Midwestern-style pizza, so for lunch we went to Zaffiro’s, an inexpensive neighborhood spot.  The special that day was a large two-topping, so we ordered pepperoni with extra cheese.  The pizza was good, the red sauce well-seasoned and well-textured, and fortunately the crust was so cracker-y that I could pull off the top layer and half-carb my way through the meal.

Stepping into family-owned Glorioso’s Italian Market a little later, I felt like I was walking along my grandmother’s path as she shopped in post-War plenty for the ingredients she’d combine and cook into the best food ever.  Salumi and cheeses, pastas and sauces, wines and sweets are stacked high and packed tight among walls dotted with black-and-white family photos.  I paused at the gelato case.  A young worker quickly asked whether I’d like anything.  I replied I was too full from lunch.  He offered me a sample.  Sigh.  How could I resist?  The cookie-dough flavor was as rich and creamy as I’d expected.  My companion ordered a cannoli and paid for it at the old-school cashier station.  We sat in the cozy eating area, and I cut a small piece off the end dotted with a maraschino cherry, leaving my friend the lion’s share, including the end studded with pistachios.  The house-made filling managed at once to be soft and firm, light and dense, creamy and tangy.  Mamma Mia!

We drove to Mitchell Airport, returned the rental car amid a throng of travellers edgy over the long wait time, surrendered our Fourth Amendment rights to the TSA, and made it to the crowded gate in time for boarding.

Our flight was cancelled.

As experienced travellers, we knew to run straight to the gate desk.  Since we were fourth in line, we only had to wait about 25 minutes.  There were no flights left that night and no available non-stops the next day.  At first, the agent tried to book us on a route requiring three flights.  We balked.  Ultimately, we were put on two flights the next day, with a change of planes in Orlando.

By this point, our luck had to change, so we decided to spend the night at Potawatomi, a mid-level regional casino/hotel.  It is owned and operated by the Forest County Potawatomi, descendants of the Potawatomi tribe who refused to leave the Great Lakes region in the 1800s, when the federal government was forcing native Indians off their ancestral lands and out to the West, in this case along what came to be known as the Trail of Death.  Like many of the tribes the government recognizes today (as well as wealthy Monaco), the Forest County Potawatomi operate casinos, and other enterprises, as means of raising tribal revenue in lieu of taxes.  Our government could profit by their example.

Because good Italian always leaves you wanting more, we were glad to find a promising M-F happy hour at Bella Italiana restaurant on the hotel’s Web site.  After searching throughout the large property, we were less glad to discover the restaurant closed.  We went to the Fire Pit sports bar and split a plentiful order of filling rib tips.  Then the Potawatomi lost a whopping $2.60 on us as we played a little video poker before going to bed early in advance of our uneventful 6:55am flight.

A few days later, I was out jogging when my phone dinged.  It was our realtor.  The buyer reneged.

For more of my story, please read: 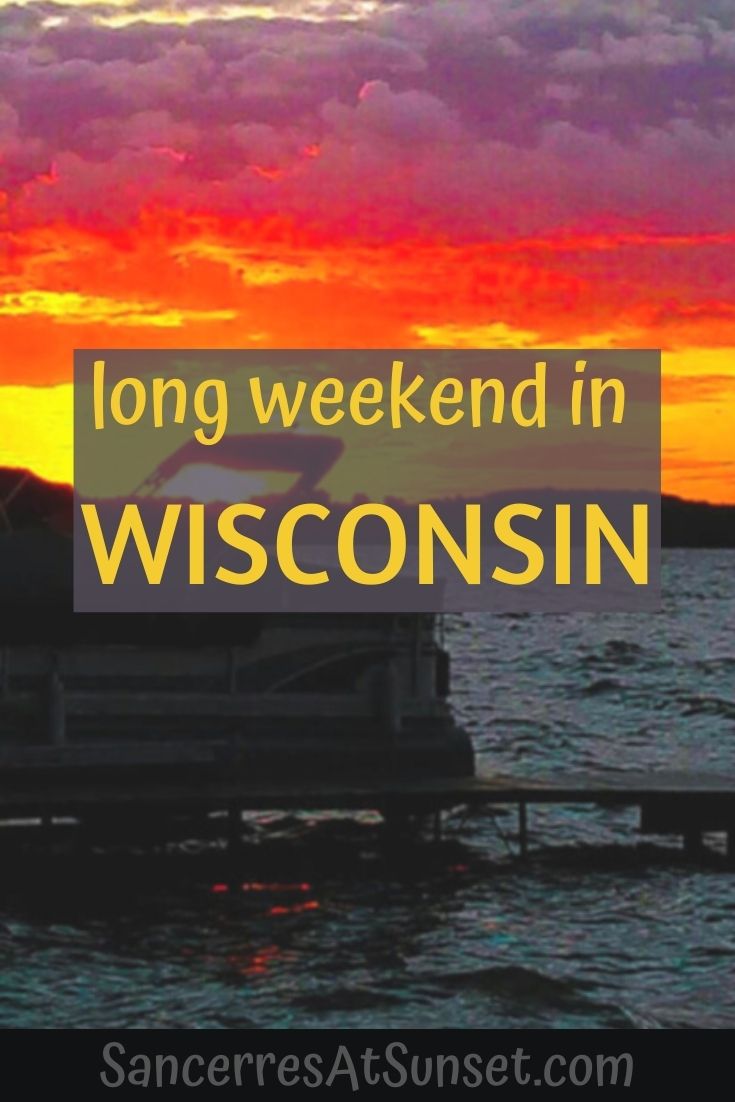 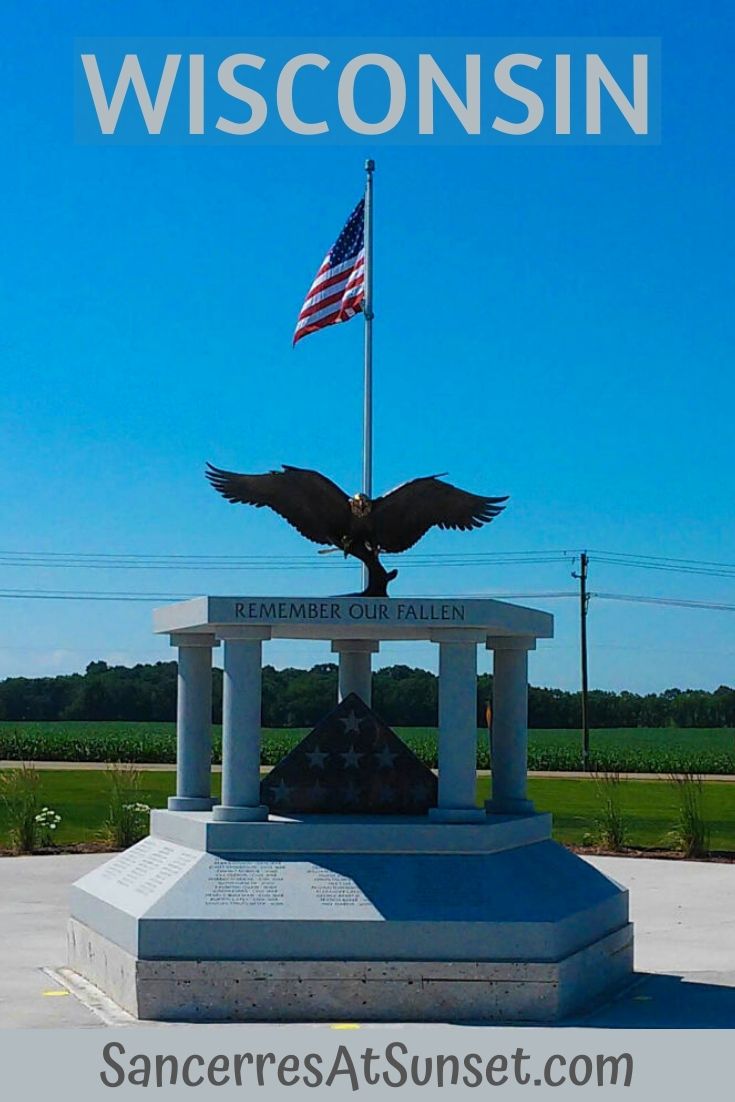 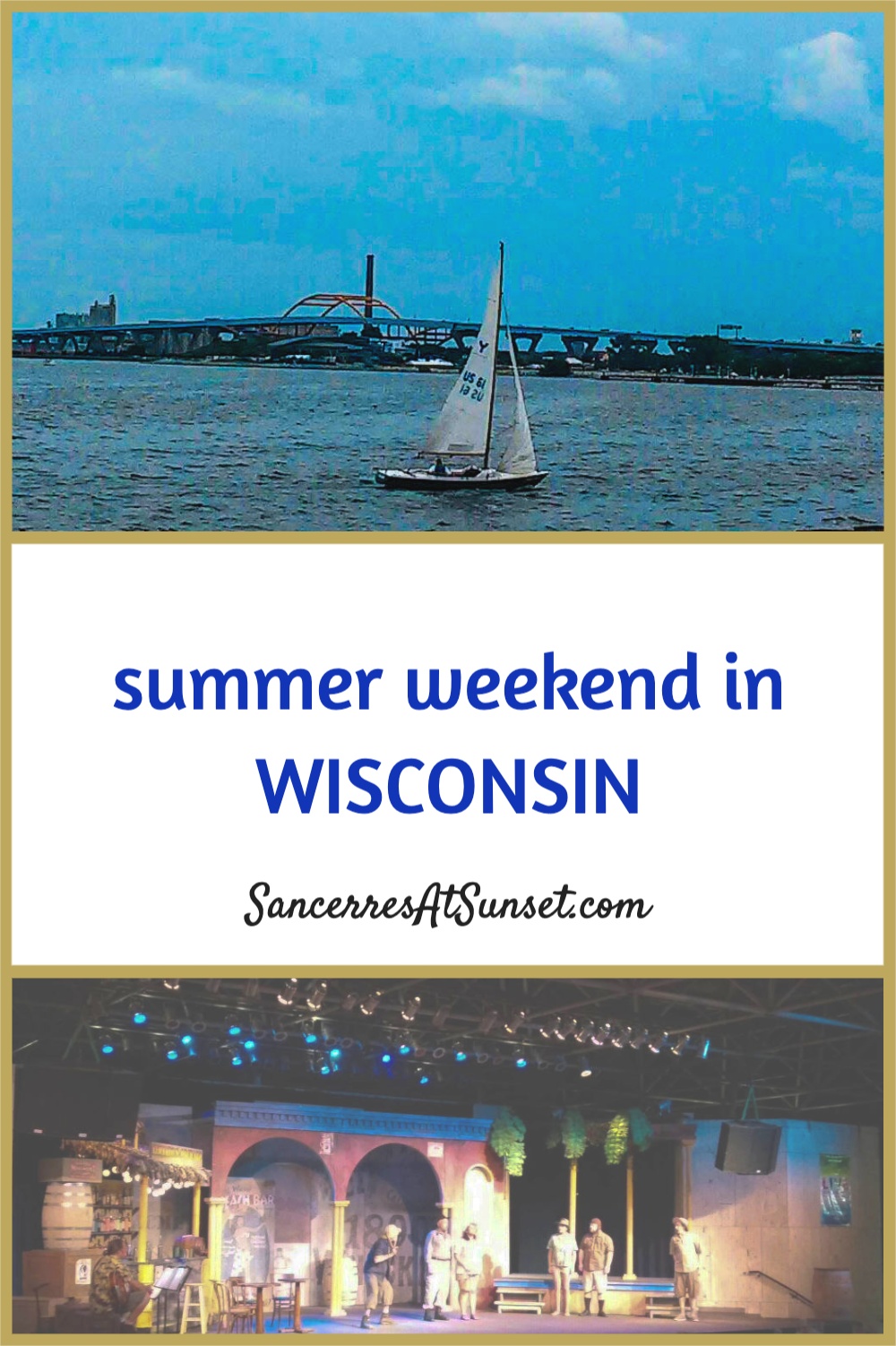 3 thoughts on “Long Weekend in Wisconsin, or How to be a Stressed Guest”