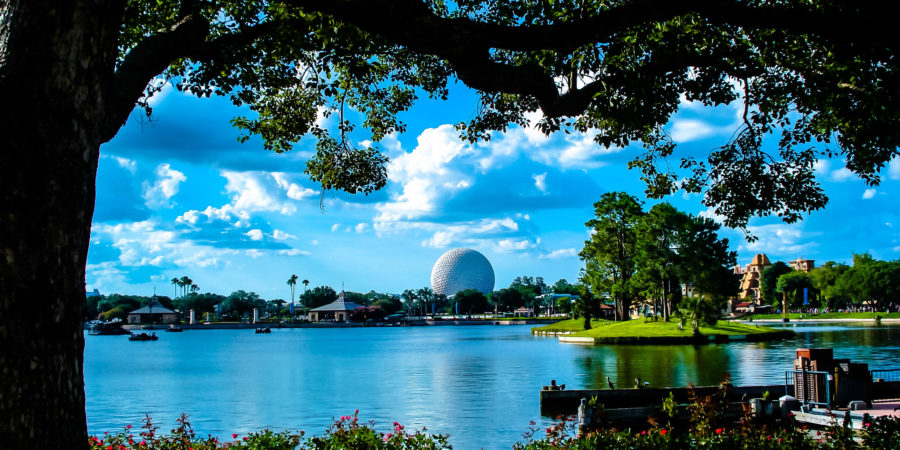 The fountain’s white spray shot up from the blue lake and sparkled against the green trees behind the Hilton Orlando Bonnet Creek.  The setting sun broke through the low light-grey clouds in patches of reddish orange.  The air felt warm and blanket-y on my bare arms after hours in the air-conditioned meeting space behind me.  I stood and watched until the fiery spots of sun disappeared behind the trees. 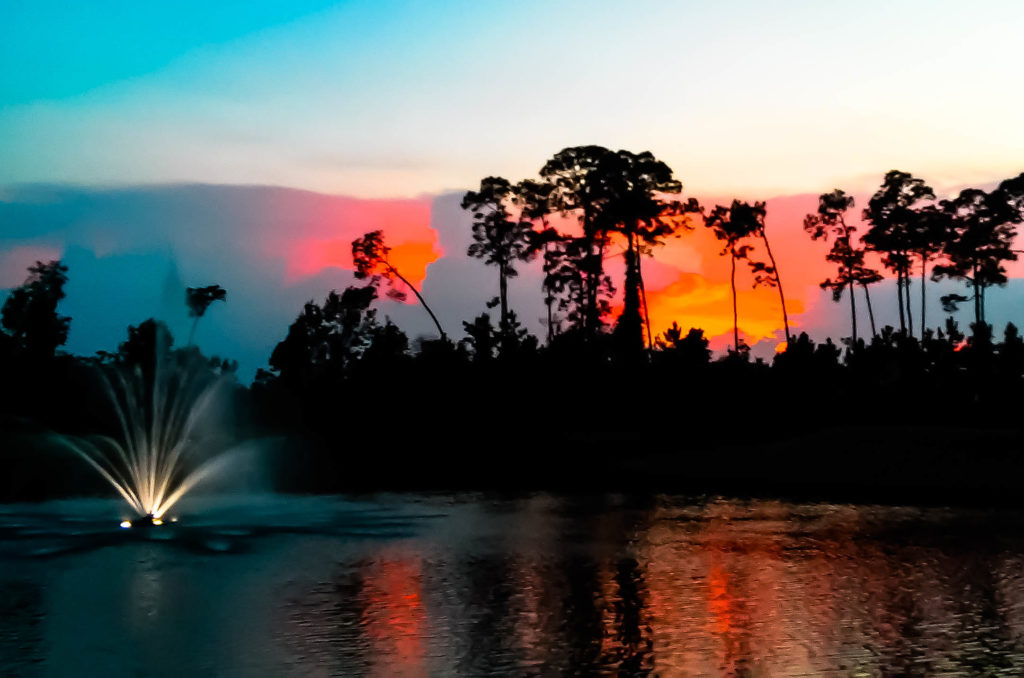 After deciding earlier this year to get serious about blogging again, I’d come to Orlando for the annual BlogHer conference, hoping to meet some new friends and learn the new best practices from my time in hiatus.  Since it was my first BlogHer, I attended a “Newbie Breakfast”, which became, for me, the site of the biggest surprise of the conference.  Speaker Jacqueline Baker asked the group questions, answered by a simple show of hands, to reveal who were the introverts and who were the extroverts.  That I’m an introvert came as no secret; that 75 percent of the breakfasting attendees were introverts came as a shock.  Maybe that helps explain blogging’s hold on me.

Some of the budget tips at a break-out session titled “You CAN Travel the World Right Now Regardless of Your Circumstances” further refined bloggers’ different types and temperaments.  Natasha Nicholes of Houseful of Nicholes suggested travelling during the off-season.  For me, this isn’t even so much a money-saving sacrifice as a pleasure-saving strategy.  I prefer to travel when the crowds are smallest; the sardine experience has never appealed to me.  Stephanie Flor of Around the World Beauty said she books only the first two nights of a journey in a hotel; then she visits hostels and meets people who know where the real local deals can be found.  Okay, I can work with this one.  I like the idea of having a secure place while I’m first getting to know a destination and then going wherever the wind takes me.  For me, the pleasure of travel is the pleasure of giving myself to the moment.  Mona Darling of Viva Your Revolution chimed in that she also likes to book the last night so that she has a place to send packages.  I also like the idea of looking forward to a secure spot for the last night before the horror that is air travel.  Oneika Raymond of Oneika the Traveller said she once slept in a hammock on the roof of a hostel in Marrakech, because it cost only $2 while a bed in a room cost $5.  This one is, well, not really me.  I’m more of a hammam-at-the-hotel than a hammock-at-the-hostel traveller.  She also described frantically looking for bathrooms with toilet seats and toilet paper during a bout with diarrhea.  Definitely not me.  I travel to escape mundane miseries, not to experience them in the exponential.  So: One tactic I’m already doing, one to adopt and adapt to my own style, one that just doesn’t suit me, all coming together in a reminder that travel, like life, is about finding the sweet spot between what you want and what the world offers.

One fun part of the conference was visiting the sponsor hall, especially on Thursday night, when the wine was flowing.  Even though it was much smaller than I expected, it was a fun place to meet some nice brands and bloggers.  The only real destination there was Israel, so I stopped by and told the rep how much I’d loved it there.  As a Renaissance Faire fan, I’ve always wanted to go to Medieval Times.  They held a special event at the conference, but I signed up too late and never made it off the waiting list, though they did give me a blue tee-shirt and a pink paper crown.  And WordPress gave me a beach kit I’m sure to use.

Food and drink were much more present.  I enjoyed few small cups of Day Owl’s fruity Rosé over the two days.  Bob Evans hosted a mac- and mash-tini bar:  The friendly representatives served plastic martini glasses with mac-and-cheese and/or mashed potatoes; bloggers could then add toppings like cheese and bacon bits.  I indulged in two because 1) they were delicious, especially the mac-and-cheese, and 2) I wanted a matching pair of glasses.  Starkist gave out samples of its Thai Chili Style Tuna Creations, which was also delicious–moist, slightly sweet, and not too spicy.  Best Buy gave me a signed copy of Carla Hall’s cooking with love.  I didn’t see Slawsa there, but my swag bag included a jar of their “hybrid condiment”, which I’m looking forward to trying out.

I did break away to visit Epcot.  I hadn’t been there since college.  My maternal grandparents had planned to celebrate their 50th anniversary by taking our whole family–27 of us–to DisneyWorld for a week.  Sadly, my grandfather died six months too early.  But as my grandmother grieved, she decided to give us the trip anyway.  I remember how my Dad had boomed his big laugh when a Disney “cast member” in a pub at the U.K. pavilion told us that EPCOT was an acronym for “Exhausted People Cursing Outrageous Temperatures”.  I agreed, even though I was dressed in comfy shorts and a tee, purchased with the carefully budgeted $100 check my mother sent me to buy a few things for the trip, while the performer was wearing a heavy English minstrel costume.  As I stepped out of my Uber on Friday night, in my conference outfit of a light grey J. Crew dress, a big white Helen Kaminski hat, and cushy black Munro sandals, I realized immediately that the climate hadn’t changed since then. 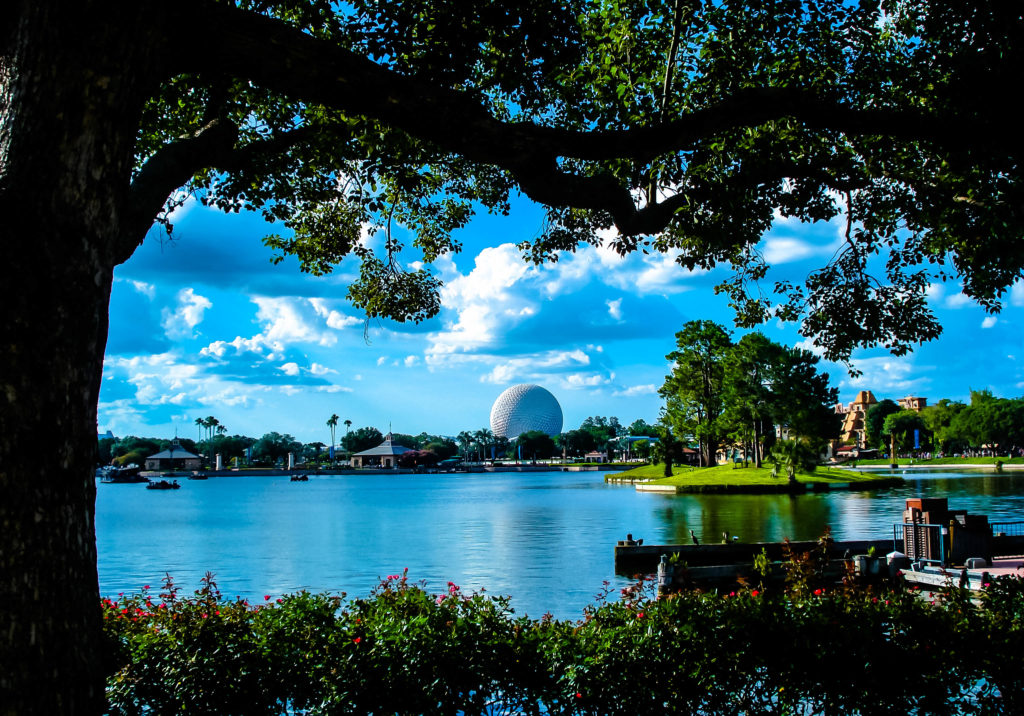 None of my family had travelled to Morocco, hotel- or hostel-style, and this was long before North African food was as popular in America as it is now, but we decided to check out the Restaurant Marrakech in that country’s pavilion.  I sat in the same courtyard area outside the Restaurant where we had once plotted our afternoon and thought back to that time, when I still had three grandparents and two parents and life was all hopes and plans and believing “If you can dream it, you can do it” and “When you wish upon a star, Your dreams come true.”  I remembered that it was the Fourth of July, because our warm waiter welcomed us with the words, “Happy Birthday, America!”  I remembered that we loved the lamb with couscous.

I walked around the World Showcase recalling my real visits to some of the countries represented.  By my first trip to EPCOT, the only other countries I’d visited were Canada and Mexico.  Since then, I’ve added: Norway, with my mother, my grandmother, and my brother, to visit my uncle and his family; Italy, with my mother, and France, alone.  I kept walking to the U.K. pavilion.  There a nice “cast member” stopped me, told me I “look like a VIP”, and offerred to let me watch the IllumiNations show from a special roped-off section.  It always pays to dress well.

I stood behind a concrete rail and watched as the sky slowly darkened over the Lagoon and the show began.  I had plenty of space.  No basketball players stepped in front of me; no ankle biters jostled me.  The glowing globe slowly turned in the center of the Lagoon, flanked by red-orange flames, and cast its reflection along the water.  The fireworks soared blue, purple, white.  The laser beams shot blue, green, gold.  The fountains sprayed white.  The show reminded me both of the fireworks at the Fourth of July Boston Pops concerts my family used to attend on the Charles River Esplanade and of the Fountains of Bellagio show I make a point of watching on my now-yearly trips to Las Vegas. 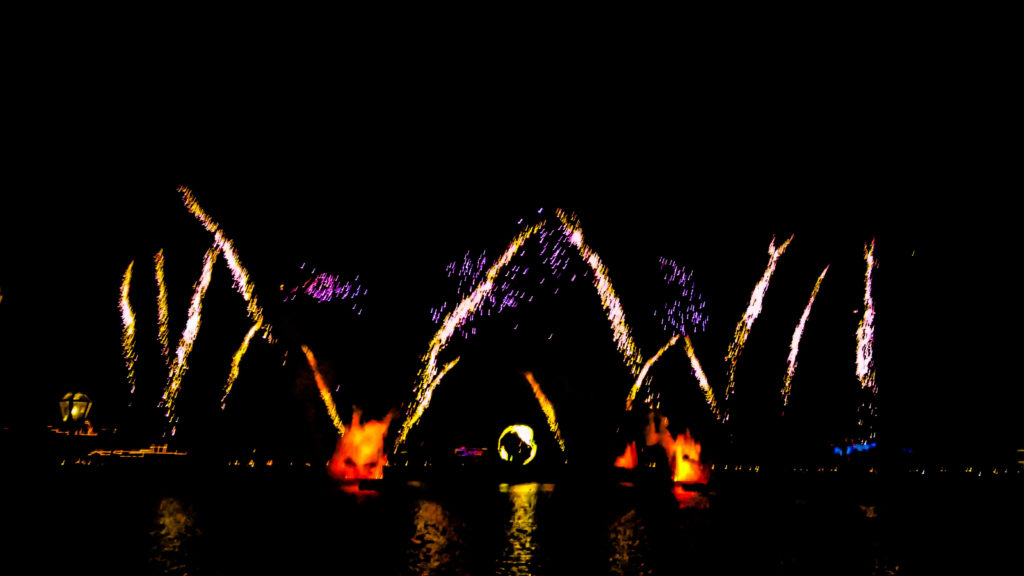 The sweet spot is where you find it. 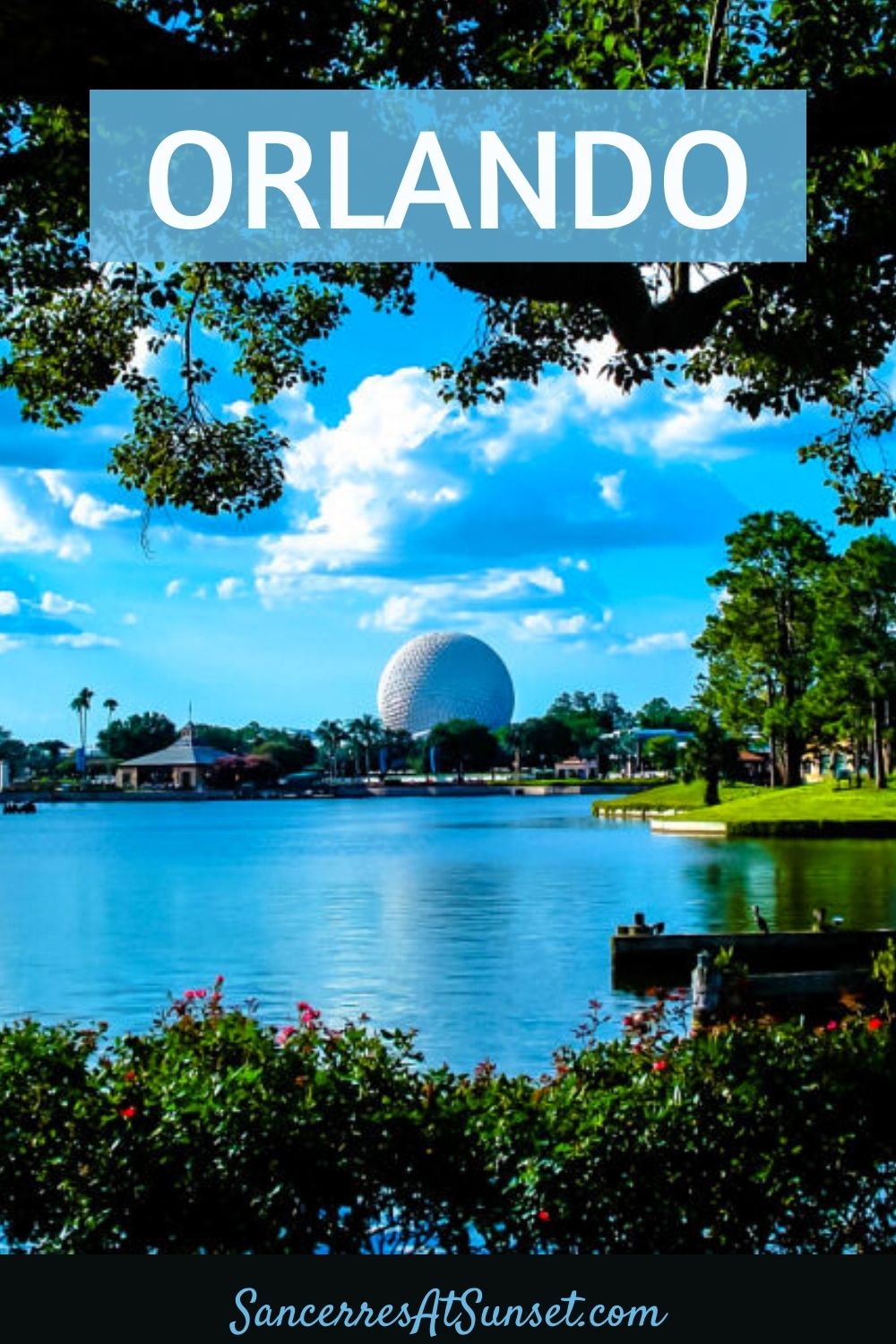 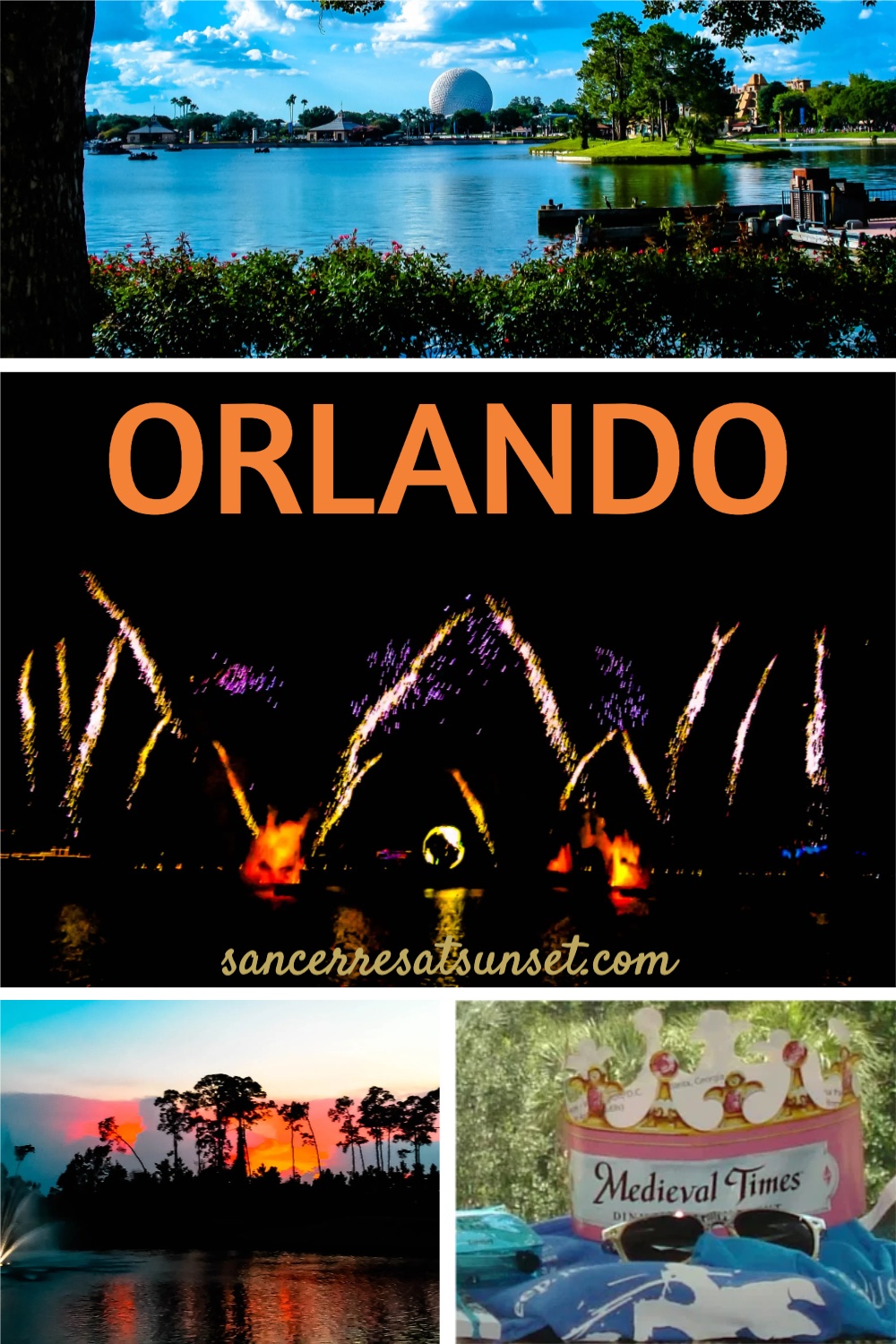 17 thoughts on “Early Summer in Orlando”