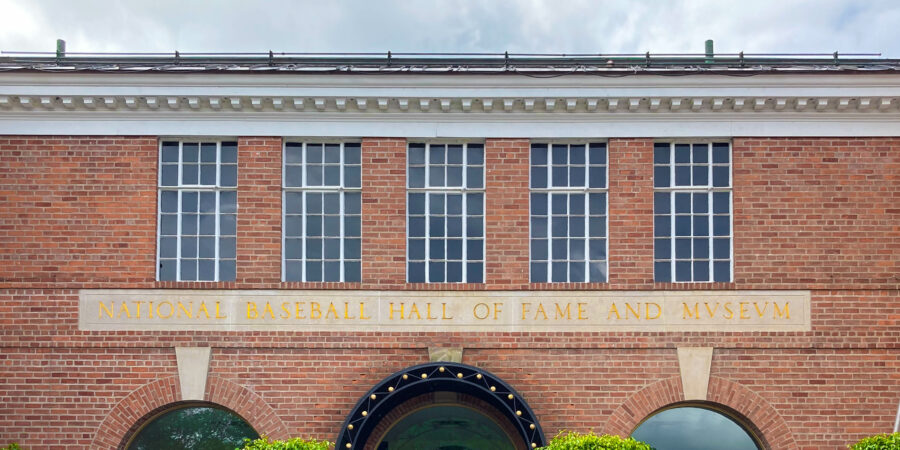 There’s nothing like a night at the ballpark.  It’s a few precious hours of escape into a great and simple American tradition.  It’s connection to something that was here before you were and will be here long after you’re gone.  It’s memories–the family ones from your childhood, and the legendary ones from before you were born, and the new ones you’re making in the moment.  And it’s time spent amid people who love the game as much as you do.

Well, maybe there’s one thing like it–a day at the National Baseball Hall of Fame and Museum.

The building is three levels of baseball history and culture.  You could easily spend a whole day strolling though baseball’s biggest moments and connecting to our national past.

In the intro film, “Generations of the Game”, Hall of Famers recall great moments from baseball’s history.  Baltimore Orioles third baseman Cal Ripken echoes New York Yankees first baseman Lou Gehrig’s iconic words of farewell.  Gehrig played 2,130 consecutive games for the Yankees, a record that lasted 56 years until Ripken broke it in 1995, and was a formidable hitter for most of his 17-season career.  In 1927, his batting average was .373, and he batted in a then-record 175 runs.  Ten years later, his 1937 batting average was still high at .351.  But by the time he played his last game on April 30, 1939, his seasonal BA had plunged to .143.  Six weeks later, he was diagnosed with amyotrophic lateral sclerosis–ALS, a painful illness that destroys the ability to walk, talk, eat, and eventually breathe, now known as “Lou Gehrig’s Disease”.  The Yankees announced his retirement and proclaimed July 4 “Lou Gehrig Appreciation Day”.  Between the two games of a sold-out double-header on that Independence Day, Gehrig was honored with speeches and gifts including a silver trophy (now at the Hall of Fame) engraved with a poem and his teammates’ signatures.  Then he delivered remarks that endure among the most inspirational in baseball history, saying in part:

For the past two weeks, you’ve been reading about a bad break.  Today, I consider myself the luckiest man on the face of the earth.  …  When you look around, wouldn’t you consider it a privilege to associate yourself with such fine-looking men as are standing in uniform in this ballpark today? … I might have been given a bad break, but I’ve got an awful lot to live for.  Thank you.

As a New Englander, I don’t normally praise Yankees, but Gehrig’s class and character exemplify the best of what baseball can inspire. 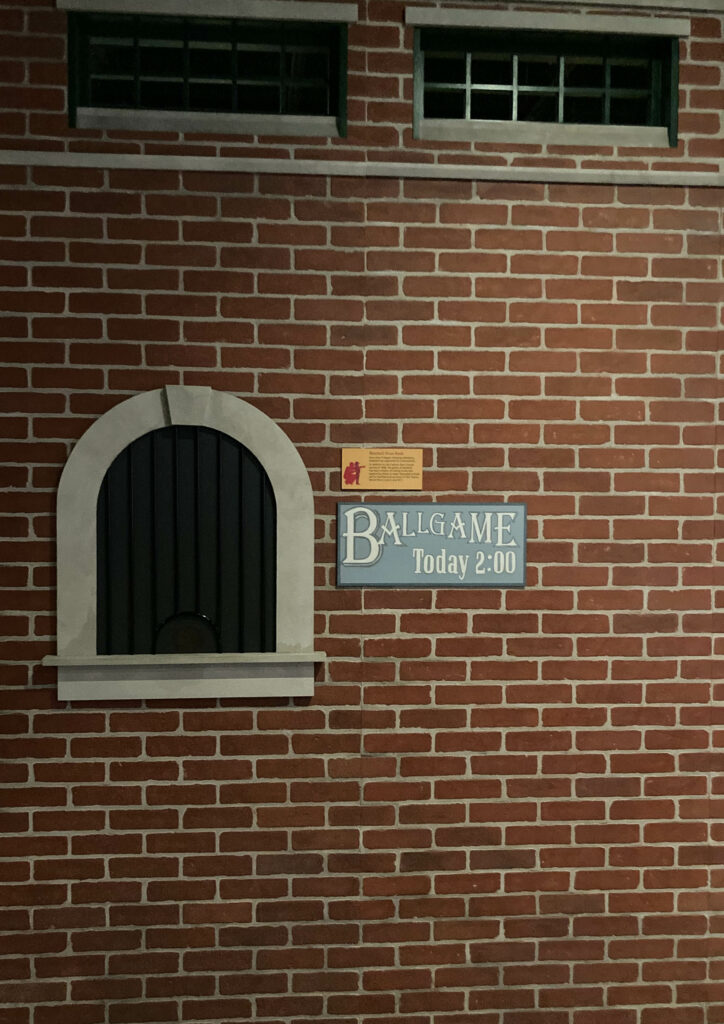 Legends conflict about how baseball really began.  But it’s clear that the sport was popular by the late 19th century.  The Museum houses lots of photographs, clippings, and other artifacts from baseball’s early days. 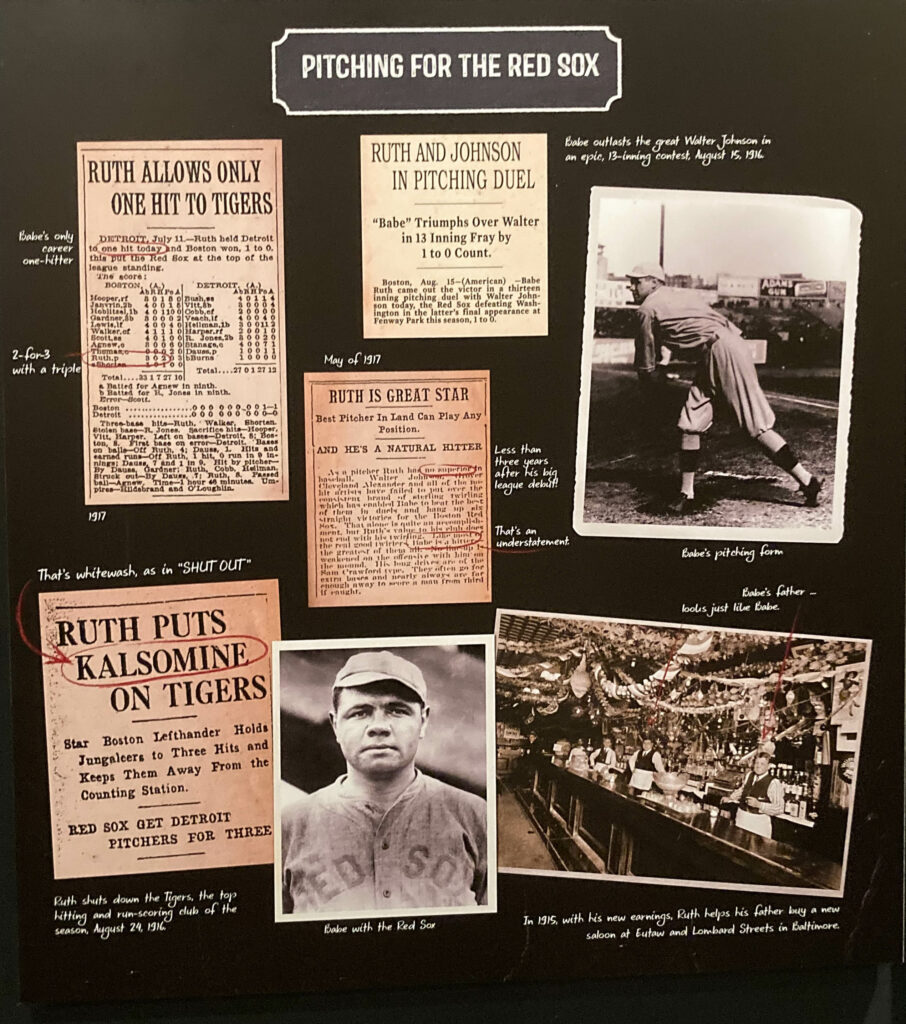 A big part of the reason for Boston’s success was Babe Ruth, sometimes known as “the Bambino”, perhaps baseball’s most iconic player.  A whole section of the Museum is dedicated to his career.  The omni-talented Ruth began as a pitcher, but a rarity who could also hit home runs.  He pitched the Red Sox to victory in the 1915, 1916, and 1918 World Series. 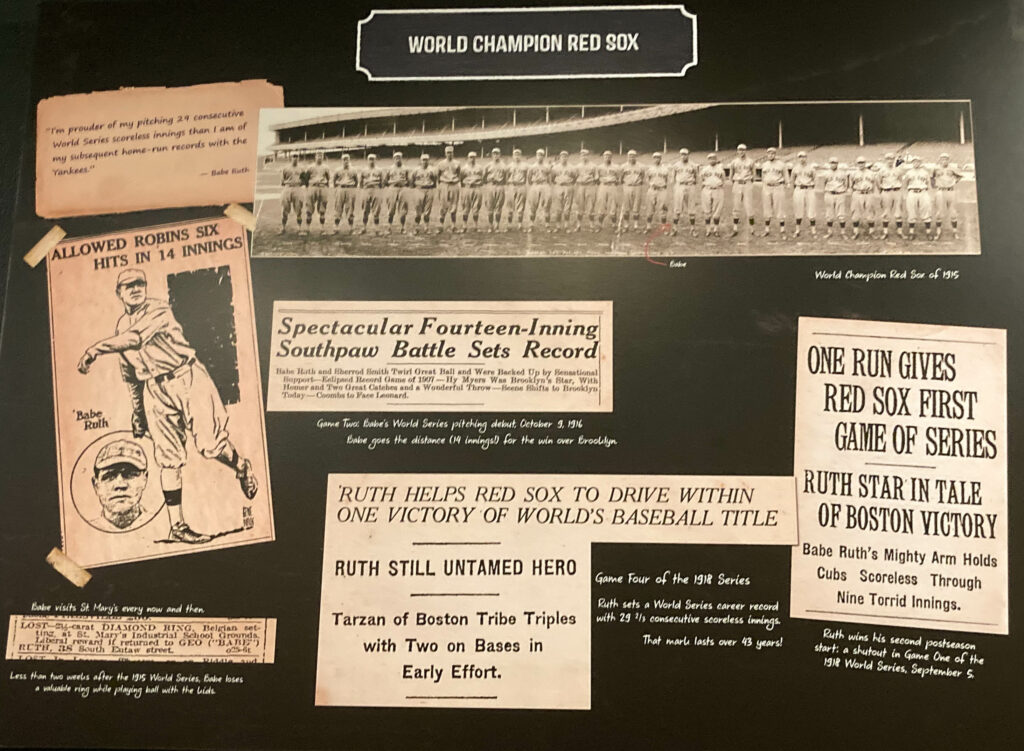 But he wanted to play more than a pitcher’s every four or five games, and he spent most of his 1919 games as an outfielder, hitting 29 home runs.  Then he was sold to the Yankees, and would later play alongside Lou Gehrig.  The Red Sox would not win another World Series in the 20th century, giving rise to a superstition called “the Curse of the Bambino”, which boils down to Boston being punished for making such a bad sale.

But however inexplicable, the sale of Ruth doesn’t come close to being the worst taint in baseball’s history.  Baseball is America’s sport, and unfortunately, it shares America’s original sin.  An important exhibit explores baseball’s history of racial segregation, when black players were confined to the so-called Negro Leagues.

After World War II, when many black Americans served in a segregated military, popular sentiment moved toward integrating baseball.  One such soldier was Jackie Robinson, who served in the Army during 1942-44.  On April 15, 1947, playing first base for the Brooklyn Dodgers, Robinson became the first black man to appear in a Major League Baseball game in the 20th century, scoring one run in his team’s 5-3 victory over the Boston Braves.  A year later, President Harry S Truman desegregated the military. 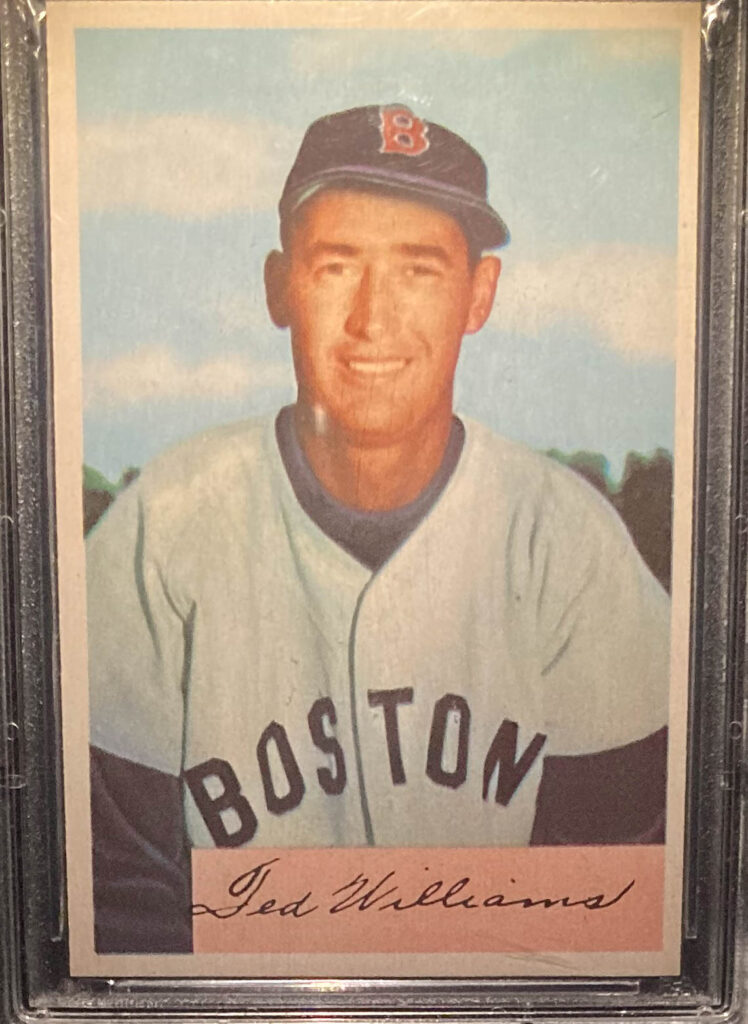 Also serving in World War II, and later Korea, was Ted Williams, another iconic player with a big presence at the Museum.  The left fielder was a phenomenal hitter who spent his 19 seasons as a player with the Red Sox.  He is the last player to achieve a batting average above .400 in a season.  His best year was 1941, when his BA was .406.  His lifetime BA of .344 would almost certainly be higher had he not left the game at his peak to serve his country during 1942-45.  Williams was elected to the Hall of Fame in 1966 and used his induction speech to call for the Hall to include players from the Negro Leagues, the first of whom would be admitted in 1971.  But he never saw the Red Sox win a World Series.

The alleged Curse was finally smashed with eight consecutive Boston victories in 2004.  The Red Sox had lost the first three games of the American League Championship Series to the Yankees; they won the next four games, becoming the only team in major-league history to overcome a 0-3 deficit to win a play-off series.  The Red Sox starting pitcher in Game Six was Curt Schilling, who had recently undergone surgery on a tendon in his right ankle.  His sutures tore during the game, and by the time he left the mound, his sock was visibly blood-soaked.  Schilling’s next appearance would be in Game Two of the World Series, against the St. Louis Cardinals.  Knowing that the television cameras would be focussed on his injured ankle, he had written “K ALS” (“Strike-out Lou Gehrig’s Disease”) on his right shoe. 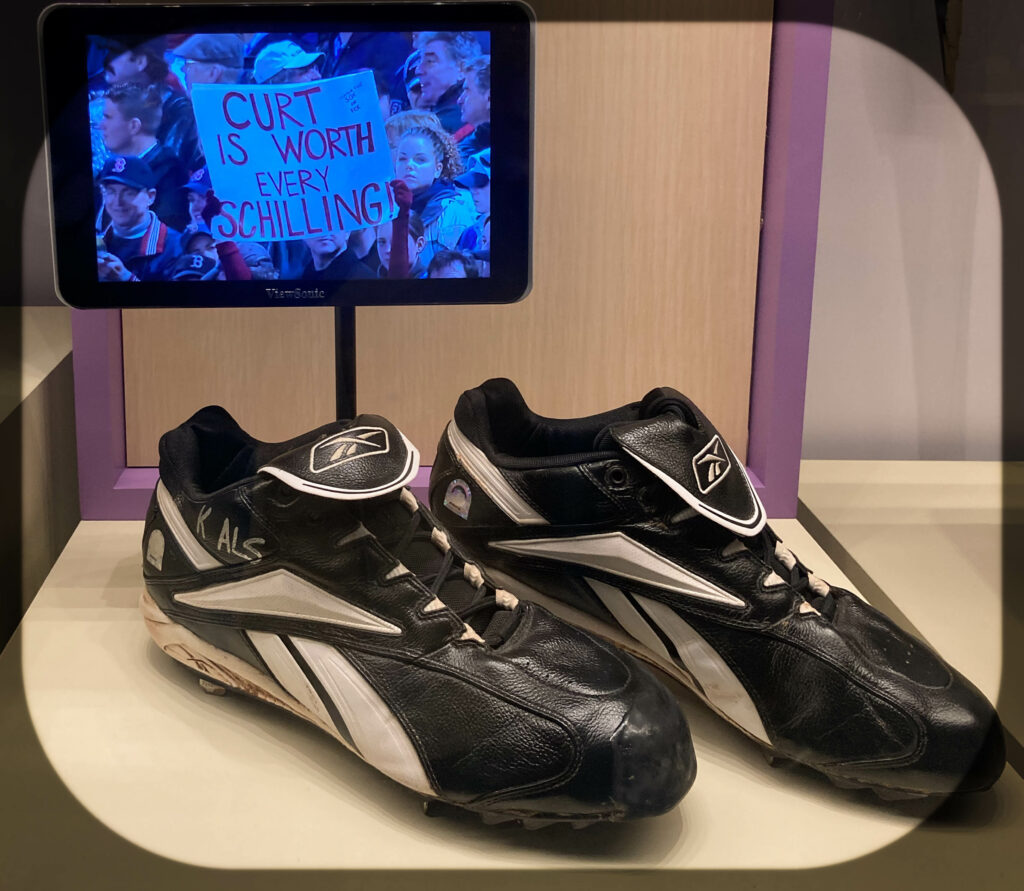 The Red Sox would win the first four games of the World Series, sweeping the Cardinals and sweeping away the “Curse”.  The Museum shows video clips of many of baseball’s greatest recent moments, including the Red Sox first World Series win in 86 years. 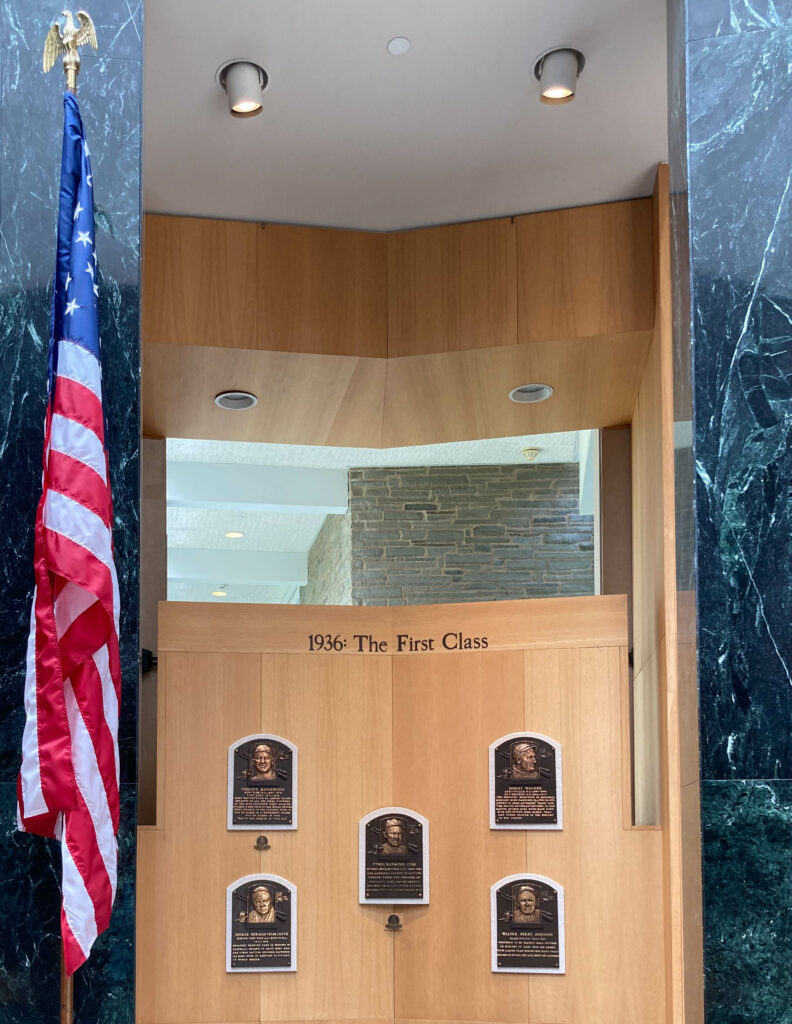 After exploring the Museum’s many artifacts, and reliving some of baseball and America’s most poignant moments, visitors can go down to the first-floor Hall of Fame’s plaque gallery.  Each honoree’s plaque lists his name, the team(s) he played for and his active dates, and a short description of his career achievements. 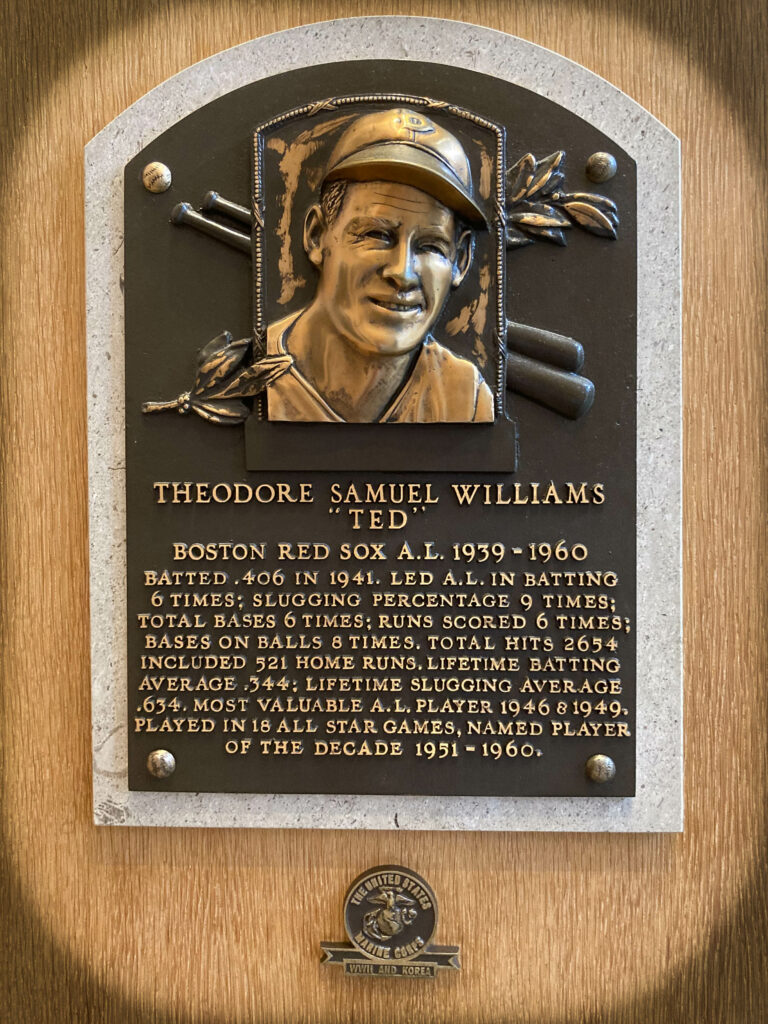 If he served his country, a small medallion beneath his plaque denotes his military branch and the war(s) during which he served. 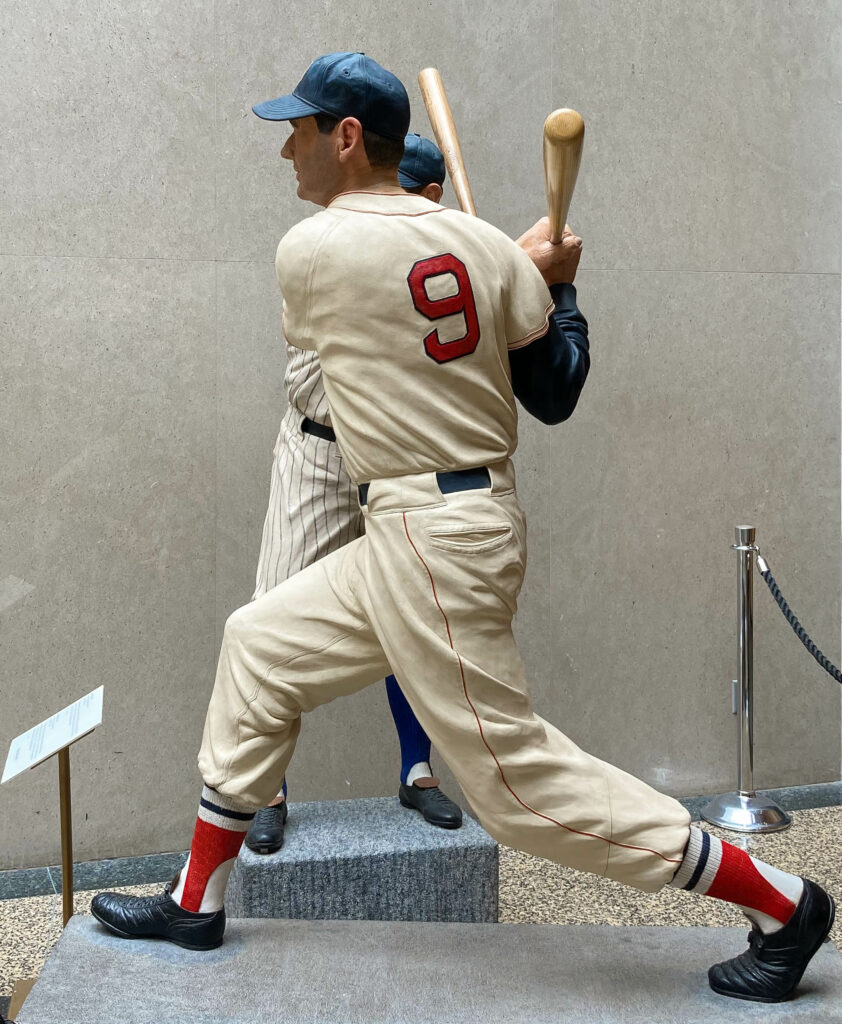 There are also two statues, of Babe Ruth and Ted Williams.  Both played for the Red Sox, but like Lou Gehrig, and Jackie Robinson, and the other greats, they belong to everyone who loves the game. 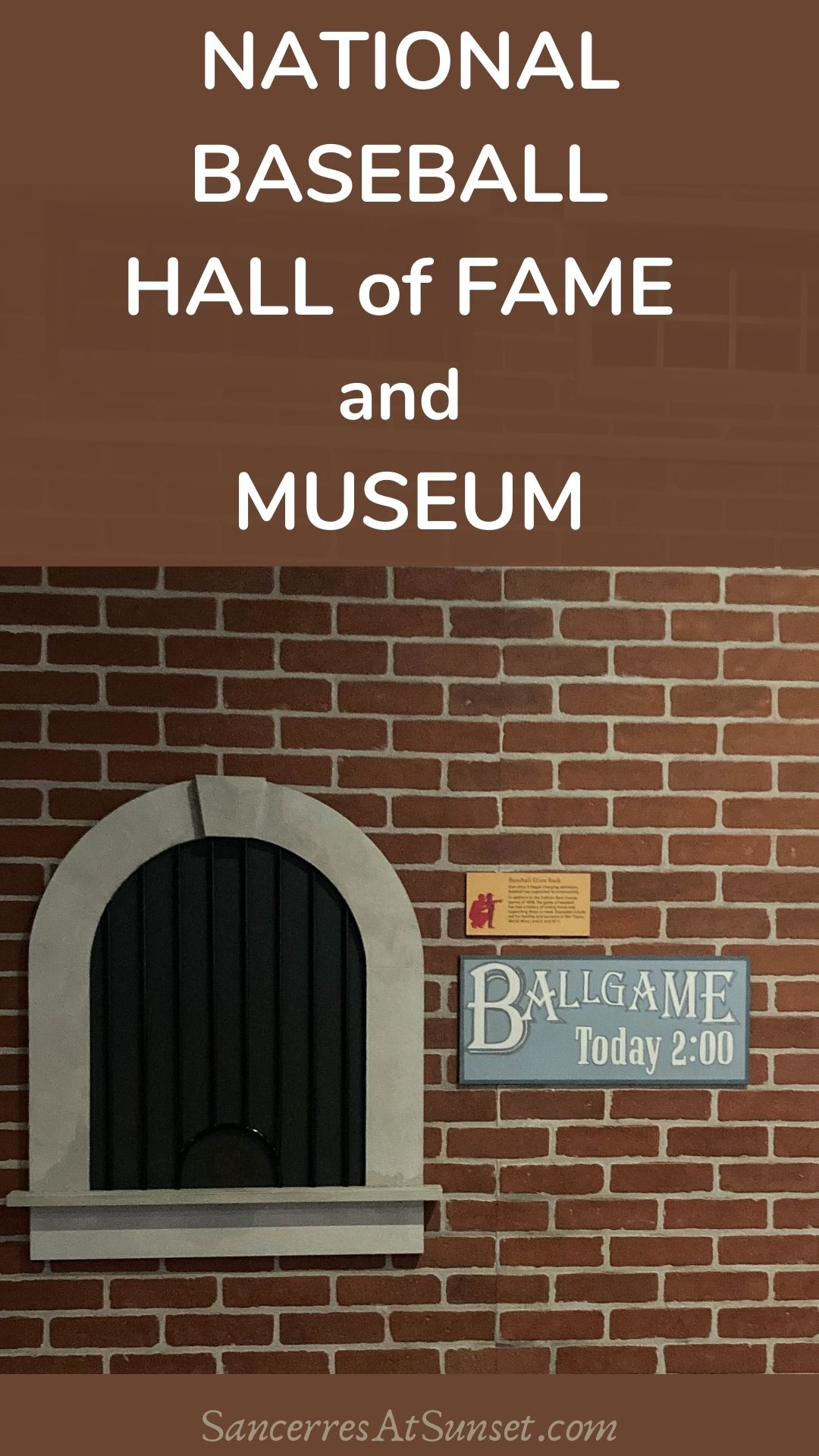