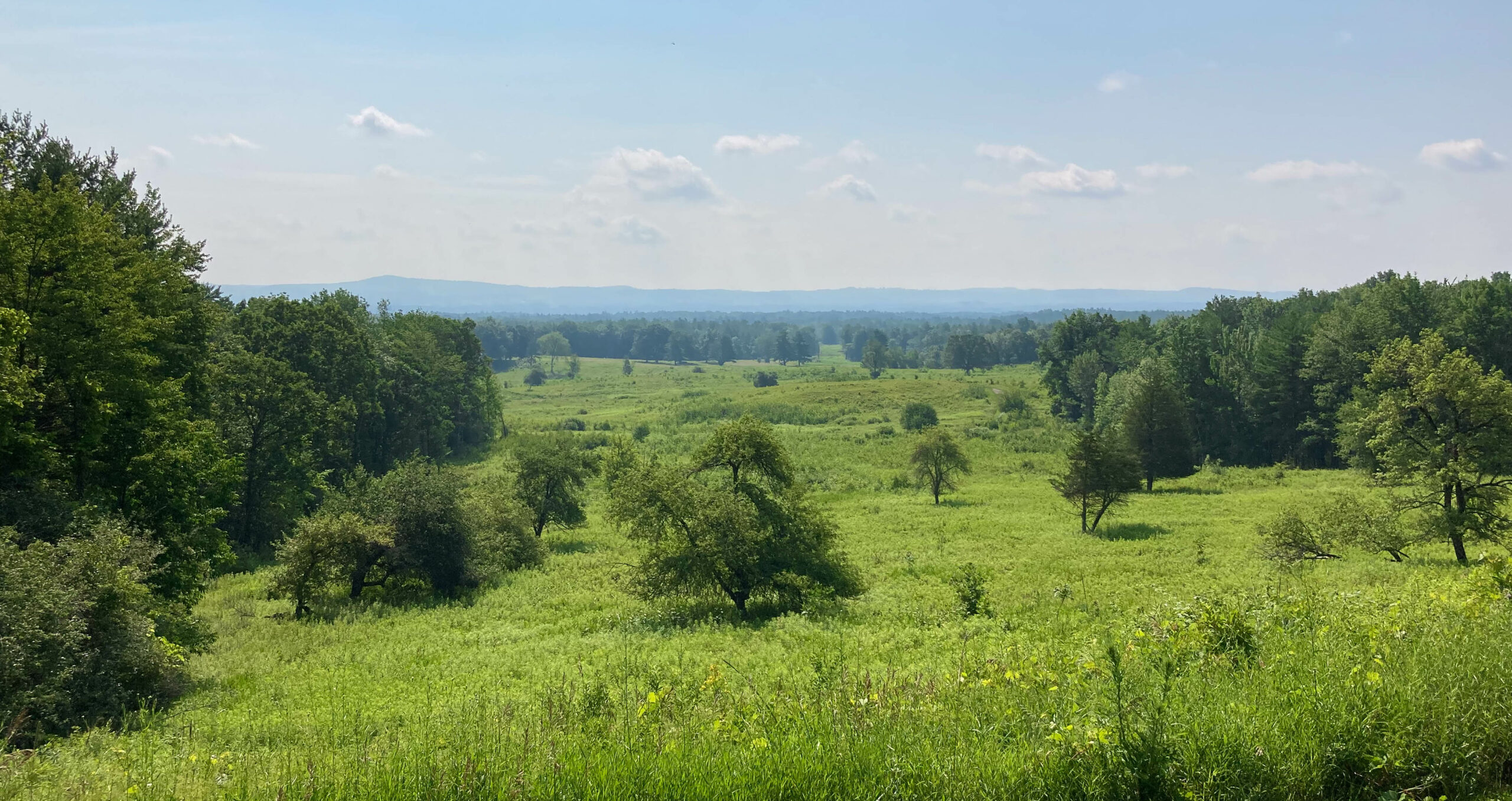 But Saratoga National Historical Park is one place where such a thing makes sense.

The Battle (or Battles) of Saratoga in 1777 comprised two primary confrontations:  the (First) Battle of Freeman’s Farm on September 19 and the Battle of Bemis Heights (also known as the Second Battle of Freeman’s Farm) on October 7.  Americans’ victory at Saratoga is considered the turning point of the Revolutionary War, because it convinced France to come to our aid against Britain.  And Benedict Arnold was key to that victory, thanks primarily to his extraordinary ability to pinpoint reverberating tactical moves, even in the chaos of battle, as well as his remarkable bravery.

But first, some background.  The Hudson River is the most important river east of the Mississippi.  It flows 315 miles from the Adirondack Mountains in upstate New York to the Atlantic Ocean at New York City, making it a major conduit for transportation, especially before the technology of the modern era.  It also lies within 200 miles of New England.  In the early years of the Revolution, the hub of Patriot activity was New England, and especially Massachusetts, where the Boston Massacre occurred in 1770, the Boston Tea Party in 1773, and the Battles of Lexington and Concord (which began the War) in 1775.

British Major General John Burgoyne reasoned that he could cut New England off from the other states by taking control of the Hudson River.  He had taken terrain in the northern Hudson River Valley and was moving his troops south toward Albany, where he believed his colleague Maj. Gen. William Howe and his troops would meet him.  Unfortunately for Burgoyne, Howe decided instead to attack Philadelphia.  Burgoyne crossed the Hudson anyway with 6,000 troops on September 13 and continued to Saratoga.

By this time, the American in control of the northern Continental Army was Maj. Gen. Horatio Gates.  His second-in-command was  Brigadier General Benedict Arnold.  According to history, the two men could not have been more different.  Gates was cautious, probably to a fault; Arnold was impetuous, tragically to a fault.

Gen. Arnold commanded 2,000 of the 7,000 Continental soldiers at Saratoga, but his location was particularly crucial because it was the highest.  It was also heavily wooded and ideal for camouflage.   Arnold convinced Gates to strengthen this area.

In the wake of this, the differences in personality between Generals Gates and Arnold came to an angry and reportedly profane shouting match between the two, with Gates ultimately relieving Arnold of command.  But Arnold remained at camp, and the two were still arguing on October 7, when they and other officers, gathered over lunch, heard the sounds of gunfire.  Arnold pestered Gates into letting him ride out to investigate; Gates eventually relented and let Arnold go, but only with the company of Gates’ new second-in-command Maj. Gen. Benjamin Lincoln.  The two generals discovered the British preparing to attack the American left.  Upon reporting this to Gates, Arnold pestered him to attack with a stronger force than the commander had planned.  Gates threw Arnold out of his headquarters.  Lincoln then persuaded Gates to strengthen his force, as Arnold had recommended.

Despite having no command, Gen. Arnold rode into the thick of battle.  He noted General Simon Fraser, commander of the British right, playing a key role and asked Col. Morgan to order a sharpshooter to take him out.  He did, and Gen. Fraser’s fall (he would later die of his wounds) appears to have started the snowball that ended with the British in retreat.  The Americans would eventually drive the British from the battlefield, thanks in large part to Benedict Arnold.

And if he’d left it at that, Gen. Arnold’s life might have gone differently.  But later in the day, he noticed that a British defensive structure known as Breymann’s Redoubt, manned primarily by German soldiers, was vulnerable through a sally port at its rear.  If Arnold could burst through the sally port while Col. Morgan’s men attacked from the front and sides, he could destroy a key British defensive position.  He did just that, but a German soldier fired a musket ball into his left thigh, killing his horse, which collapsed and pinned him to the ground.

Gen. Burgoyne surrendered on October 17.  Gen. Arnold spent months recovering.  It was the second time he’d been shot in the left leg; the first was nearly three years earlier at Québec.  When the leg finally healed, it was two inches shorter than the right.  He would eventually be able to sit a horse again and to walk with the help of a platform shoe.

Today, travellers can take a 10-stop self-driving tour of Saratoga National Historical Park.  Interesting sites include the house where Gen.  Fraser died and his burial site; the location of Gen. Burgoyne’s October retreat, with a view of the Hudson River, and Breymann’s Redoubt, with the nearby Boot Monument, which commemorates Benedict Arnold’s leg wound. 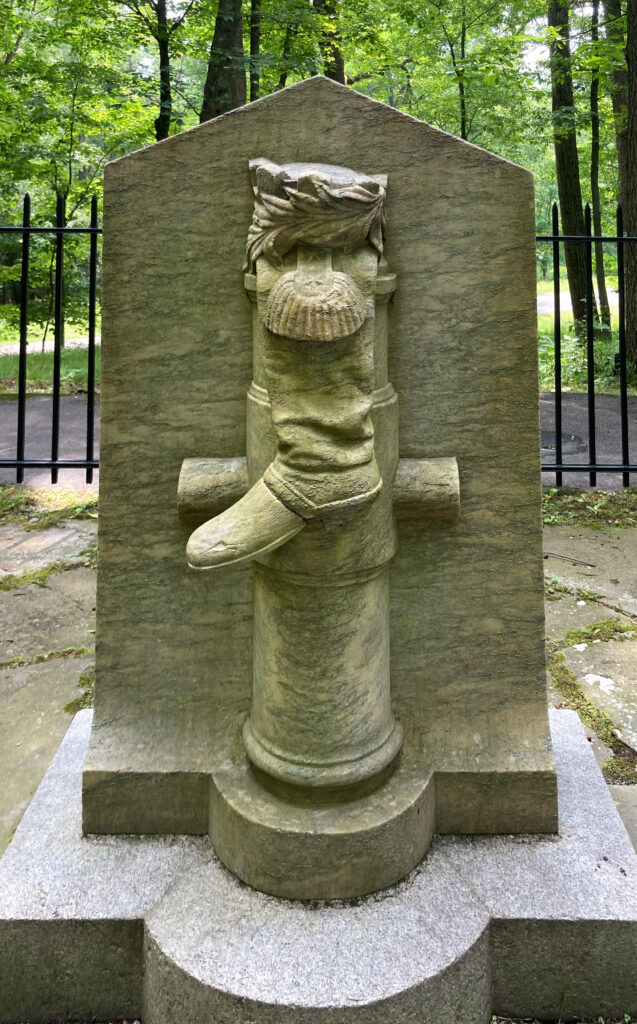 So, what happened?  Why would Benedict Arnold betray the country he’d so bravely served?

As happens so tragically often with potentially great men, it appears that Benedict Arnold was undone by his own hubris.  He was peevish, avaricious, and resentful.

He also had some legitimate grievances.  First and foremost was the delay in his promotion to Major General.  Foreshadowing the lunacy of modern personnel practices, the Continental Congress had decided to put a quota on the number of Major Generals from each state.  And since Gen. Arnold’s native Connecticut had reached its quota, he was passed over for a promotion while other men, whom he not unreasonably deemed less essential to the American cause, were advanced above him.  Gen. George Washington intervened, but by the time Arnold’s promotion finally came through, bitterness had already taken root in him.

Then there was money.  He had sustained considerable expenses during the War, for which the Continental Congress was slow to reimburse him.  (Arnold was not alone in this.  The Continental Congress was terrible about paying soldiers, and when it did, its money was so inflated it was nearly worthless.  Hence the expression, “Not worth a Continental”.)  And Benedict Arnold liked money, and the things, and the lifestyle, and the prestige that money can buy.  He came from a once-eminent family, but his unfortunately drunken and pretentious father went bankrupt.  But having tasted the dregs of prominence in his youth, it seems the touchy Arnold felt entitled to the real thing.

After Saratoga, though he still wasn’t able to fight, the newly minted Maj. Gen. Arnold arrived at Valley Forge, where he took an oath of allegiance to the United States on May 30, 1778.  While there, he was approached by James Seagrove, part-owner of a Philadelphia schooner named the Charming Nancy.  The British were preparing to evacuate Philadelphia, and merchants were worried that their goods would be confiscated by the Continental Army.  Seagrove wanted a pass, issued by a Continental officer, that would protect the Charming Nancy‘s valuable cargo from seizure.  On June 4, Arnold issued the pass, apparently in exchange for a share in the schooner.

Two weeks later, Gen. Washington appointed Gen. Arnold military governor of Philadelphia.  It was a position that would allow him many more opportunities for such financial shenanigans.  But even so, he also assumed significant debt.

The post also allowed him to meet and eventually marry Peggy Shippen.  Nearly 20 years his junior, she was the daughter of a well-off royalist family acquainted with British intelligence officer Major John André.

As time went on, Arnold’s questionable dealings attracted the attention of Joseph Reed, a former delegate to the Continental Congress and then-president of Pennsylvania’s Supreme Executive Council, basically the equivalent of a state’s Governor.  Reed launched an investigation of Arnold that eventually would lead to the latter’s being court-martialed on charges that boiled down to abusing his influence in exchange for financial gain.  Perhaps the fact that these charges were almost certainly true added to Arnold’s resentment.  He wrote Washington a letter complaining, “Having made every sacrifice of fortune and blood, and become a cripple in the service of my country, I little expected to meet the ungrateful returns I have received of my countrymen, but as Congress have stamped ingratitude as a current coin I must take it.”  He was acquitted on January 26, 1780, of all charges except issuing the Charming Nancy pass, for which he was issued a formal reprimand by Washington.

By this time, the resentful Arnold had already offered his espionage services to the British.  He was communicating via coded message with Maj. André, with correspondence often passed through his wife Peggy, feeding the British information like American troop and supply locations, and arguing over the compensation he wanted for his betrayal.

At some point, Gen. Arnold either hatched or accepted a plan to surrender West Point to the British for £20,000.  Gen. Washington considered the Point, a site hosting three forts at an S-shaped curve in the Hudson River, to be the most important strategic position during the Revolutionary War.  Washington appointed Arnold its commander on August 3, 1780.  Arnold shortly began weakening its defenses.  He met there with Maj. André to discuss the details of the plan on September 21.  But on his way back to British-held territory on September 23, André was captured by American militiamen, who searched him and found the plans for the surrender in his stocking.  Arnold learned of André’s capture and fled to the British side.

Maj. André was court-martialed and sentenced to death.  On the grounds that he was an officer and not a spy, he appealed to Gen. Washington and asked to be shot rather than hanged.  Washington insisted that André be hanged as an example.  Some speculate that this was partially in retaliation for the British hanging four years earlier of 21-year-old American spy Nathan Hale.  Over the objections of Washington’s officers including Alexander Hamilton and the Marquis de Lafayette, André was hanged on October 2.  (My great-great-great-great-great-great-great-grandfather Brig. Gen. John Glover was the officer of the day.)

Ironically, Benedict Arnold became a Brigadier General in the British army.  He was also paid £6,000.  He spent the next three years of the War attacking Americans.  After the War, he moved to London, then to Canada, then back to London, making enemies with shady dealings.  He died on June 14, 1801, at the age of 60.

Greed and grudge-holding are two things people believe can protect themselves and their pride from the vicissitudes of life, but these flaws are ultimately, tragically, ironically corrosive to those who cling to them. 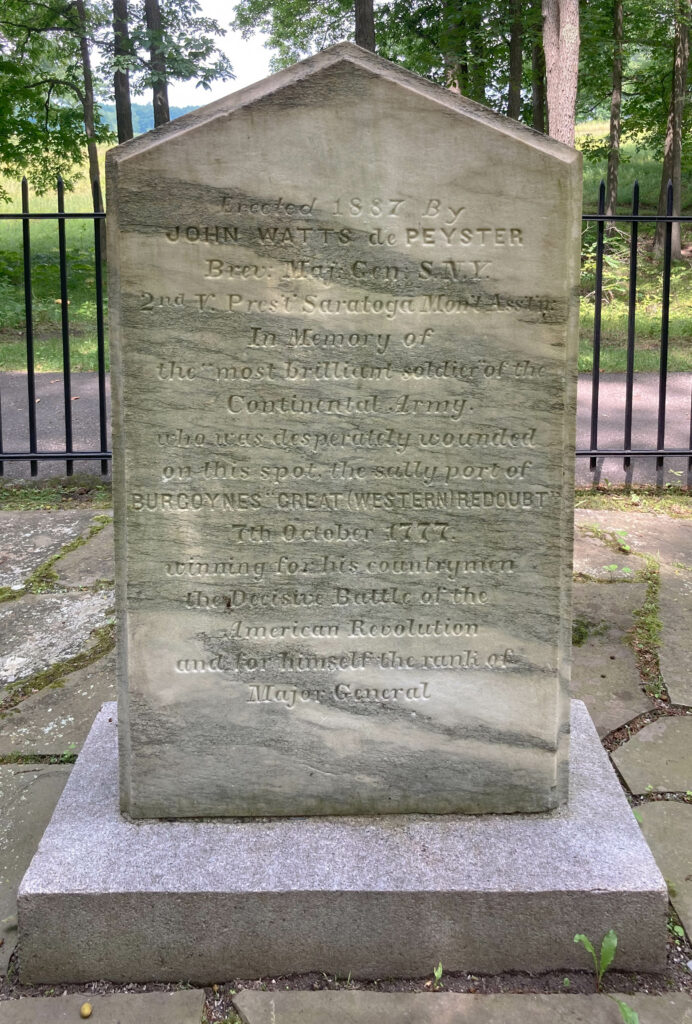 the ‘most brilliant soldier’ of the
Continental Army
who was desperately wounded
on this spot, the sally port of
BURGOYNE’S ‘GREAT (WESTERN) REDOUBT’
7th October 1777
winning for his countrymen
the Decisive Battle of the
American Revolution
and for himself the rank of
Major General

But it doesn’t mention his name. 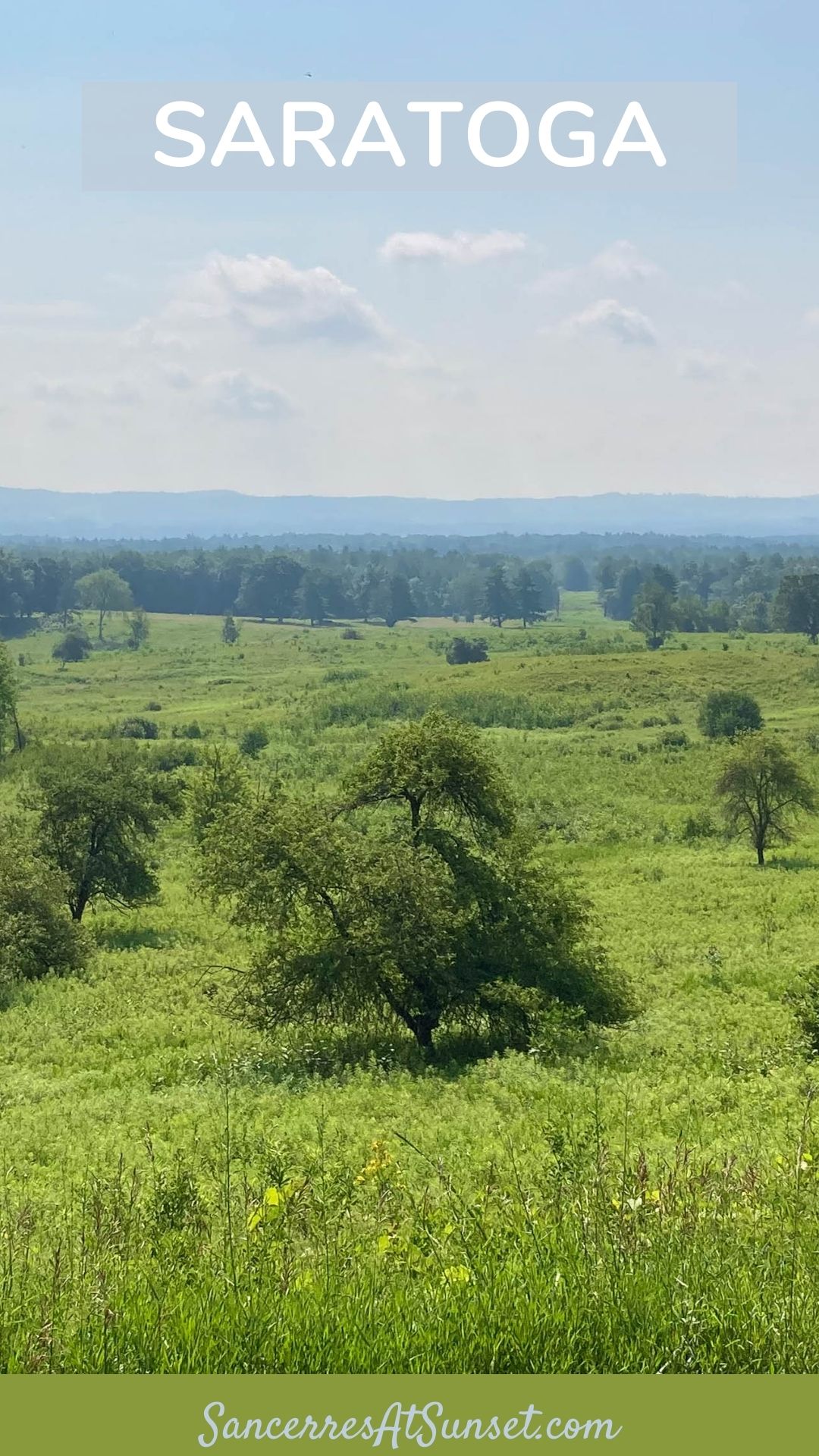