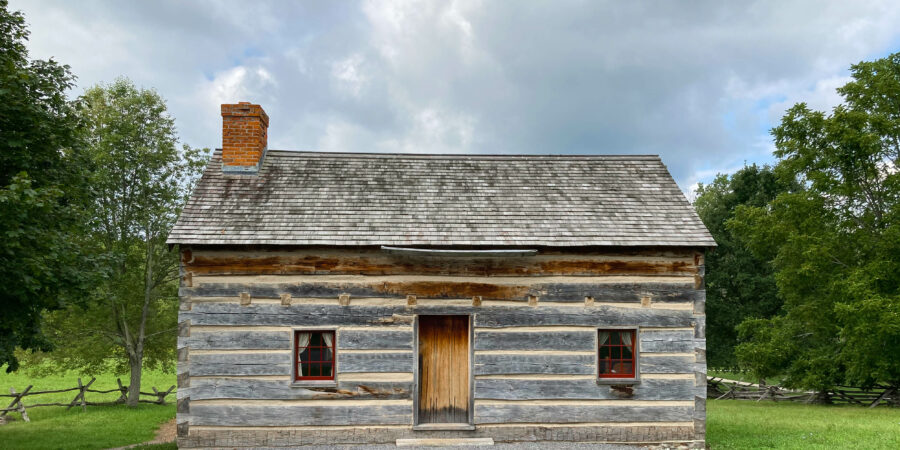 The Second Great Awakening was a religious revival movement that swept through parts of the American frontier region in the early 19th century.

Against this backdrop, Joseph Smith, Sr., moved his wife Lucy and their nine surviving children from Vermont to western New York in 1816.  Joseph was born in Massachusetts and had tried a handful of occupations in New England, but none had proved successful.  Lucy Mack Smith was born in New Hampshire; her father served in the Revolutionary War and appears to have once been well-off but lost a large portion of land after a leg injury.

The Smiths rented a small home in the northern town of Palmyra and did odd jobs to save money.  After about two years, they were able to start their own farm on a 1,000-acre lot about two miles south of town.  Joseph, Sr., and his two older sons, Alvin and Hyrum, felled trees and built a 1,000-square-foot log home. 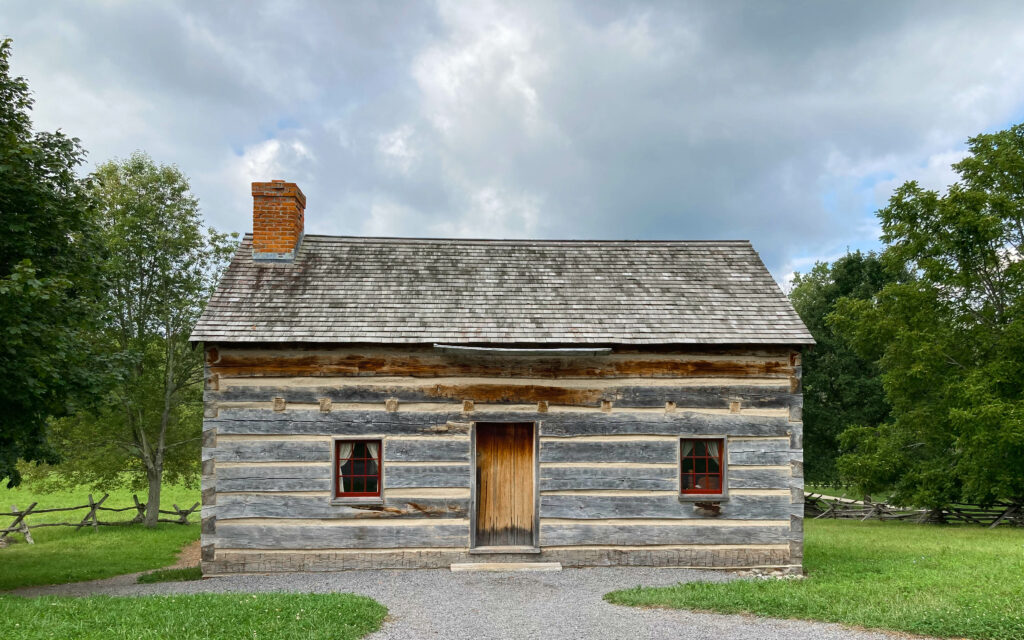 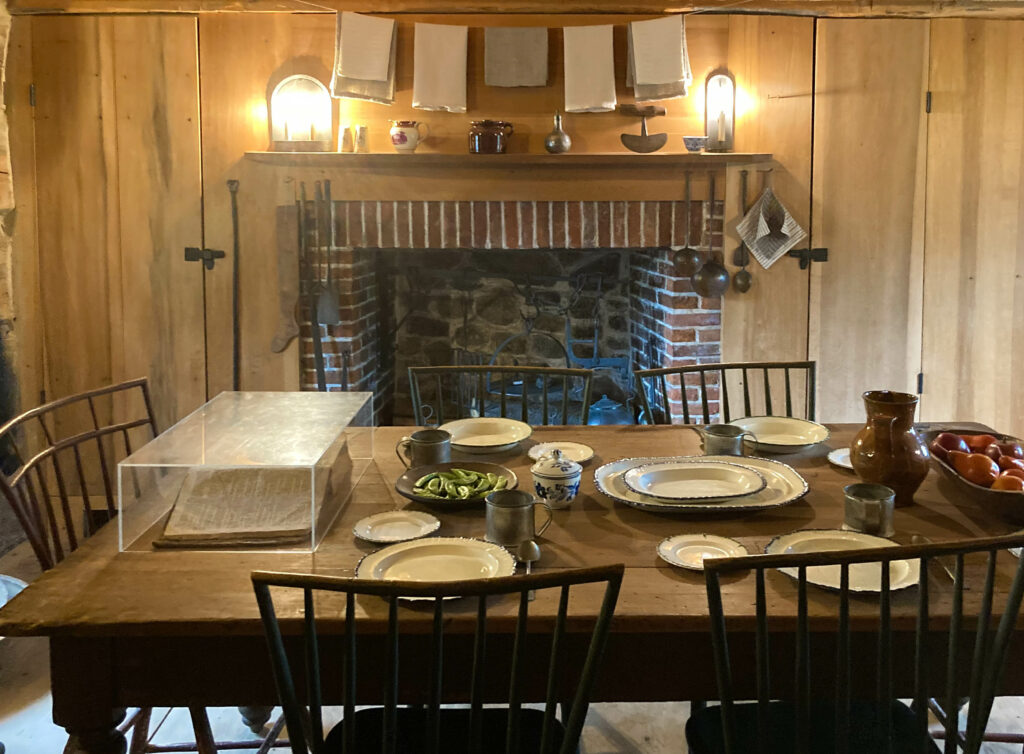 The small, two-storey dwelling was typical for its time, though the Smiths did include some uncommon creative touches, like a brick-and-cobblestone fireplace. 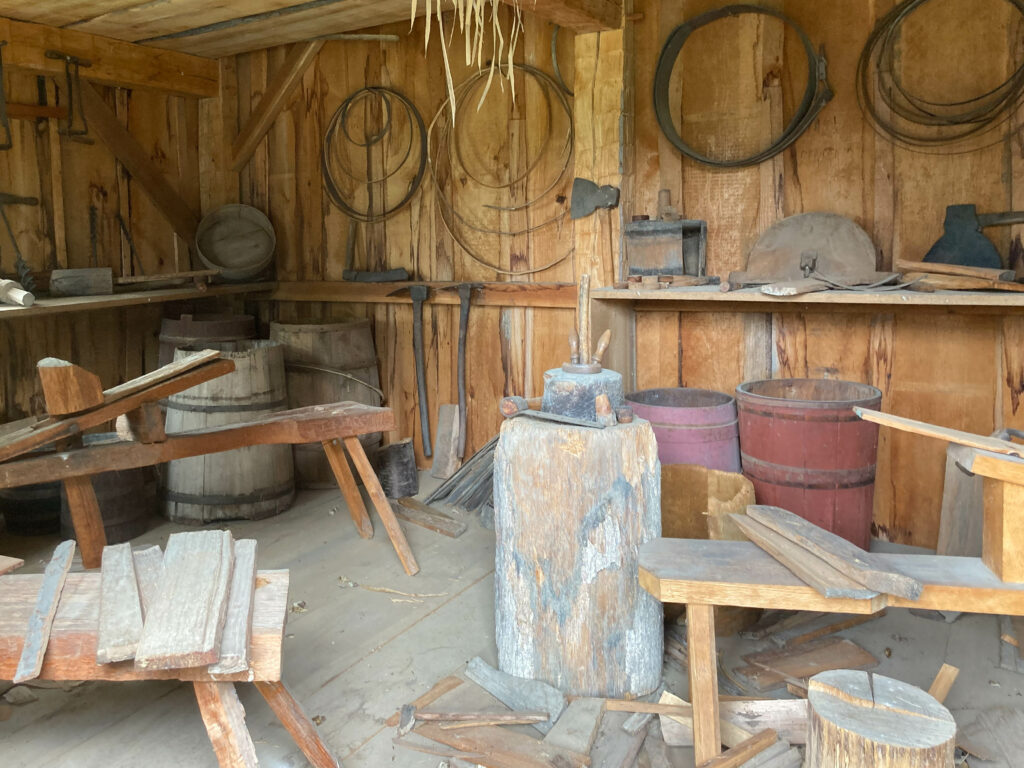 They also built several necessary outbuildings like a cooper shed.  They planted an apple orchard and crops including wheat, beans, oats, and corn.  They also tapped many of the property’s maple trees and made sugar. 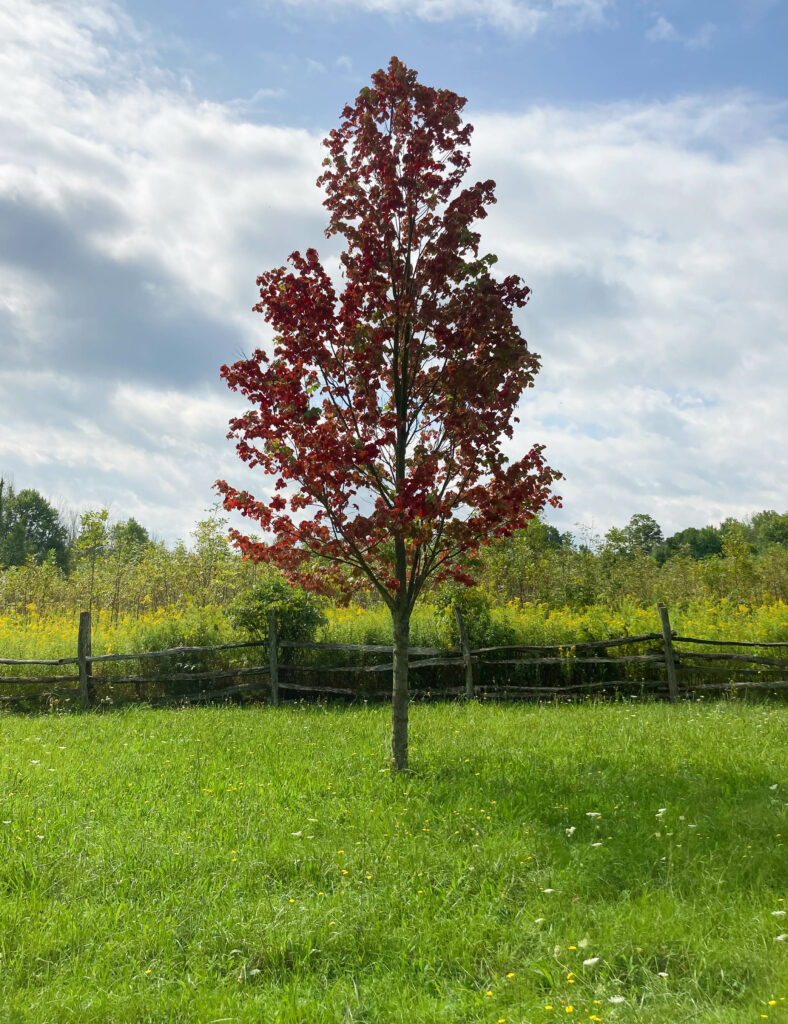 By around 1819, 13-year-old Joseph, Jr., was pursuing an occult practice called scrying, which is the act of looking into some kind of medium in hopes of receiving visions and/or messages.  The most well-known medium is a crystal ball, but all kinds of shiny objects were commonplace.  Joseph would often place what he called a seer stone in a hat and then put his face into the hat to block the light and claim to await whatever information the stone would yield.

In 1820, with the emotions of the Awakening still running high in the area, 14-year-old Joseph, he claimed, was confused about which church to join and found inspiration in James 1:5:

“If any of you lack wisdom, let him ask of God, that giveth to all men liberally, and upbraideth not; and it shall be given him.”

He said he went out to a grove of trees behind the log house to pray. 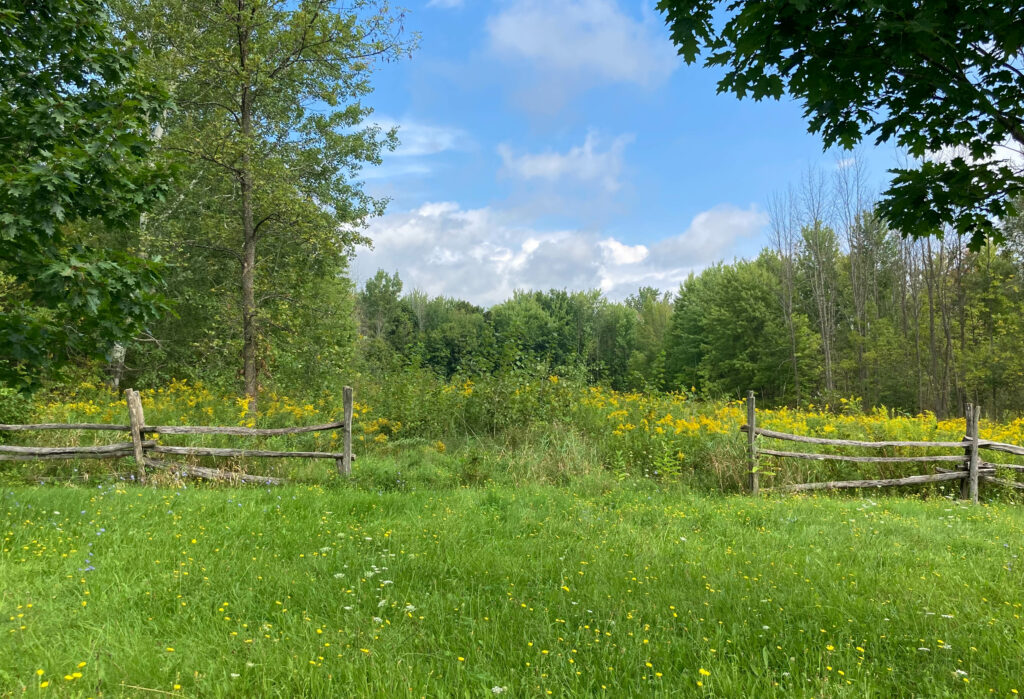 In response, according to his story, “two Personages, whose brightness and glory defy all description” appeared to him.  They told him that all current churches were doctrinally errant and forbade him to join any of them, he said. 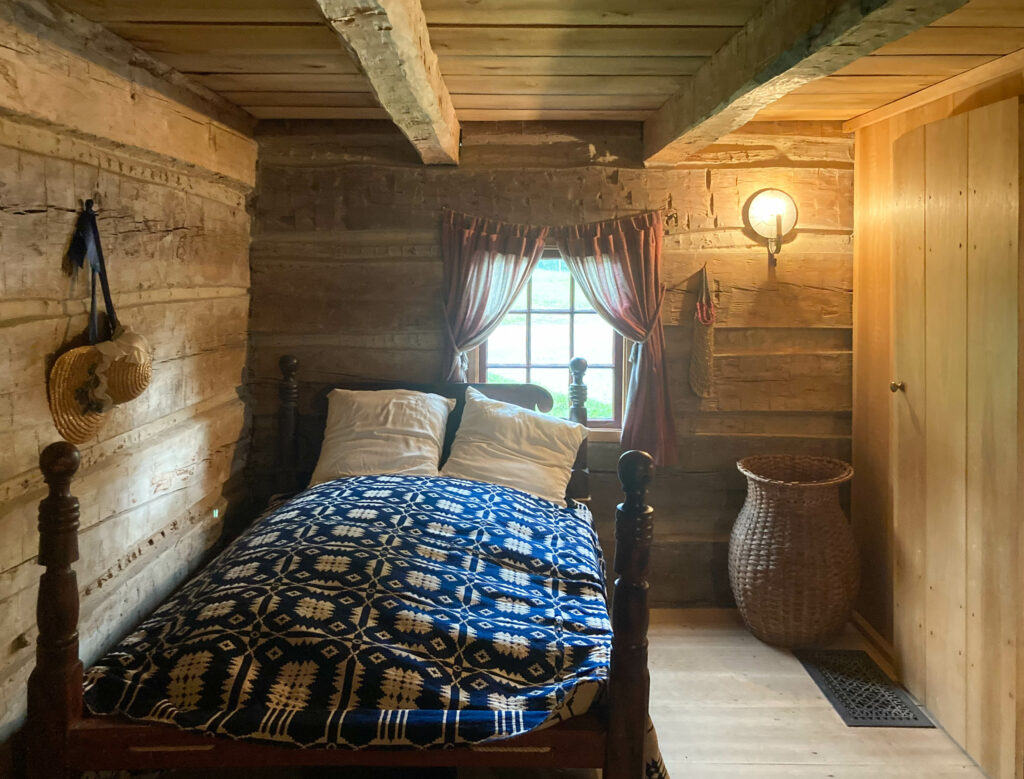 The next year, 46-year-old Lucy Smith gave birth to her 11th child.  The family added a small bedroom to the first floor.

Two years later, Alvin, a perfectionist who had worked as a carpenter’s helper, began work on a larger frame house for the family.  The new home would be on their same lot but just over the town line in Manchester. 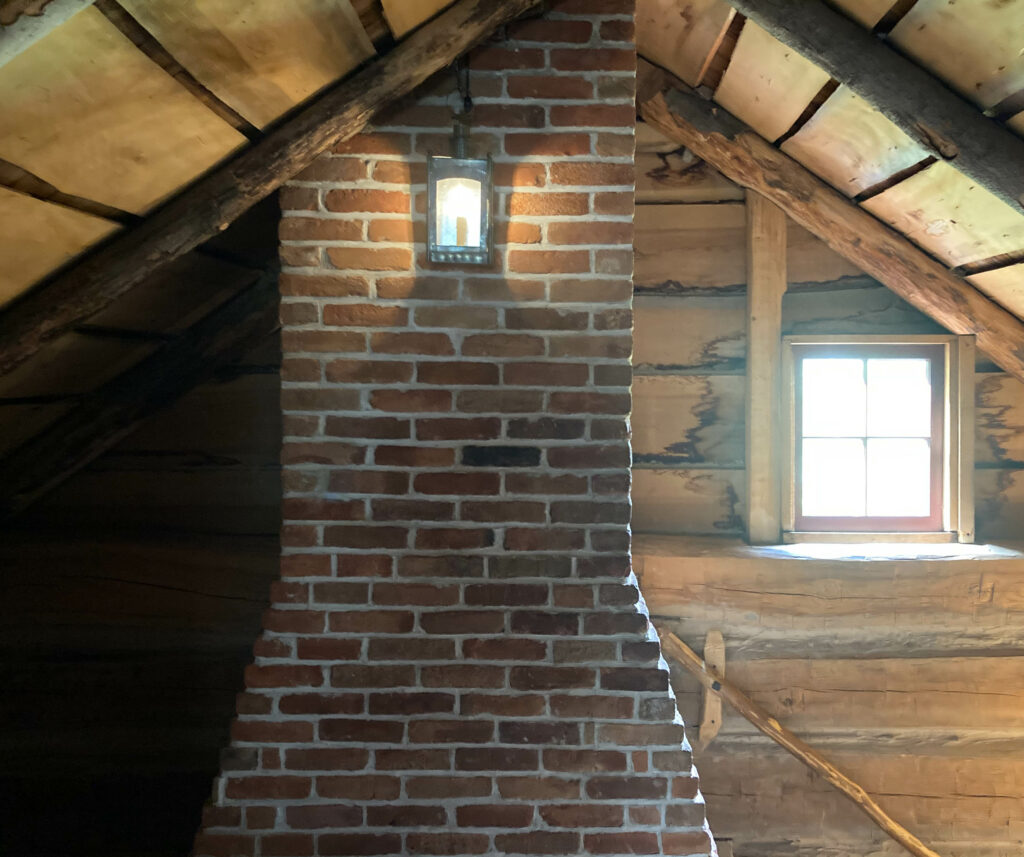 On September 21, 1823, young Joseph claimed, an angel named Moroni, wearing “a loose robe of most exquisite whiteness”, visited him during the night in the upper bedroom of the log house.  According to Joseph’s story, the angel told him about a hidden book of golden plates.  The book contained “the fulness of the everlasting Gospel” and “an account of the former inhabitants of this continent, and the source from whence they sprang”, he said.  There was also a breastplate with two seer stones that would enable the plates to be translated, according to the story.

Two months later, on November 19, Alvin died of mercury poisoning.  He had not completed the frame house.  His death increased financial pressure on the family.   Some of the older members hired themselves out to perform odd jobs including treasure-hunting, which was popular at that time and place, often working with other acquaintances.  In 1824, Joseph, Sr., built a well and cistern for a prosperous farmer named Martin Harris.

Meanwhile, Hyrum finished the frame house in fulfillment of his late brother’s wishes. 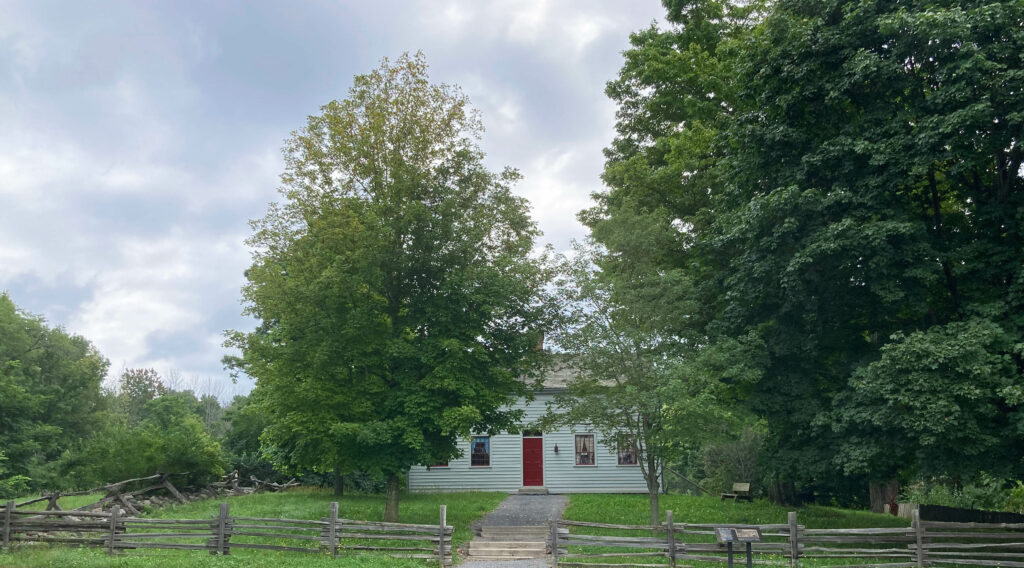 The family moved into their new home in 1825. 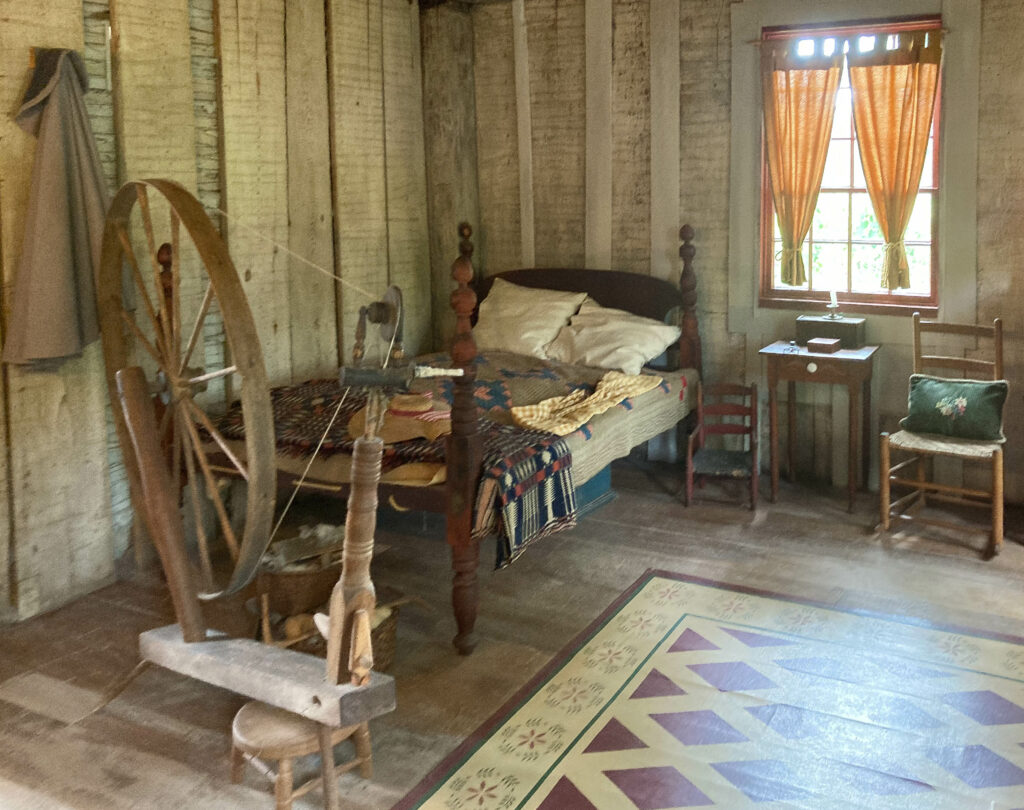 By the end of the year, they lost the title to the property because they couldn’t make their land payment.  The new owners allowed them to remain as renters. 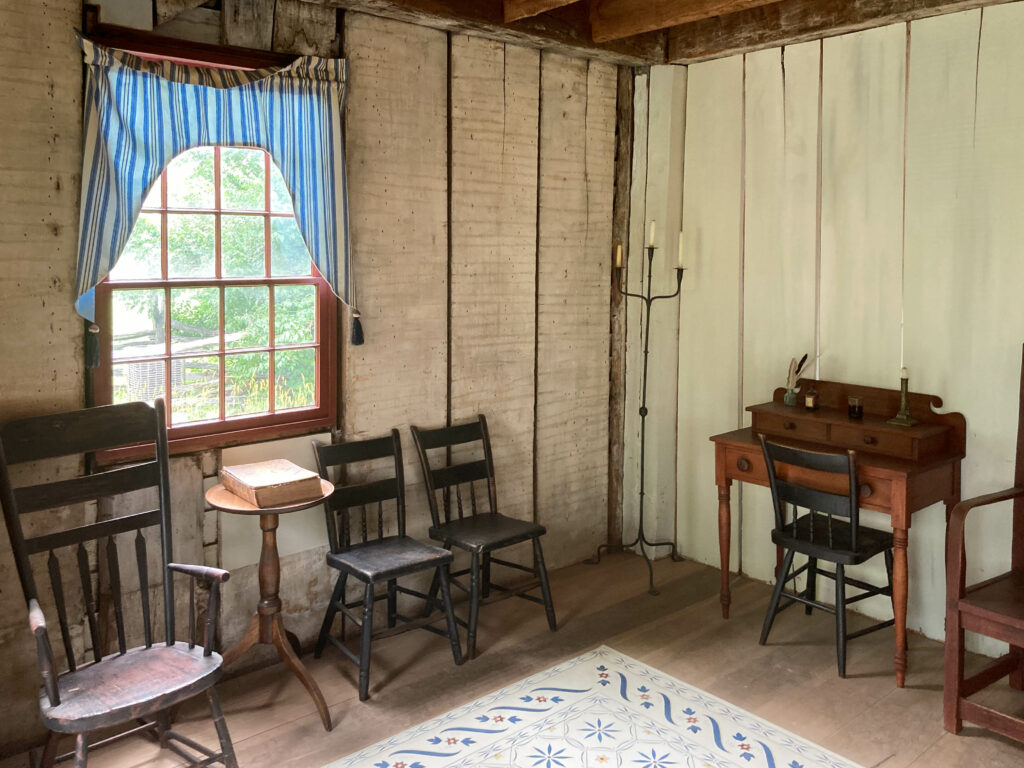 That same year, a well-off farmer named Joseph Stowell hired 19-year-old Joseph Smith to help him search for a rumored lost Spanish gold or silver mine in Harmony, Pennsylvania.  The search failed.

The next year, a prosperous farmer in Chenango County in south-central New York sponsored several of 20-year-old Joseph’s treasure-hunting efforts.  Young Joseph was subsequently tried in County Court, and identified as “The Glass Looker”, apparently in connection with these attempts, although records seem unclear on both the specific charge or charges and the disposition of the case.

He also apparently continued to work from time to time on other projects for Joseph Stowell after the unsuccessful Spanish mine search.  While in Harmony, he boarded at the home of Elizabeth and Isaac Hale and their family, some of whose ancestors had come over on the Mayflower.  Joseph wanted to marry the Hales’ daughter Emma, then in her early 20s.  But her father objected, calling Joseph careless, poorly educated, and saucy and insolent to his father.  The young couple eloped and were married on January 18, 1827, and moved into the frame house on the Smith farm.

On September 22, according to young Joseph, he retrieved the book of golden plates from the nearby Hill Cumorah.  He claimed that the text was engraved in a language called “reformed Egyptian” and contained a history of indigenous Americans.  His former treasure-hunting associates insisted that the plates should belong to them all.  They ransacked places on the Smith farm searching for them.  Young Joseph said that at one point he hid them in a bed with two of his sisters. 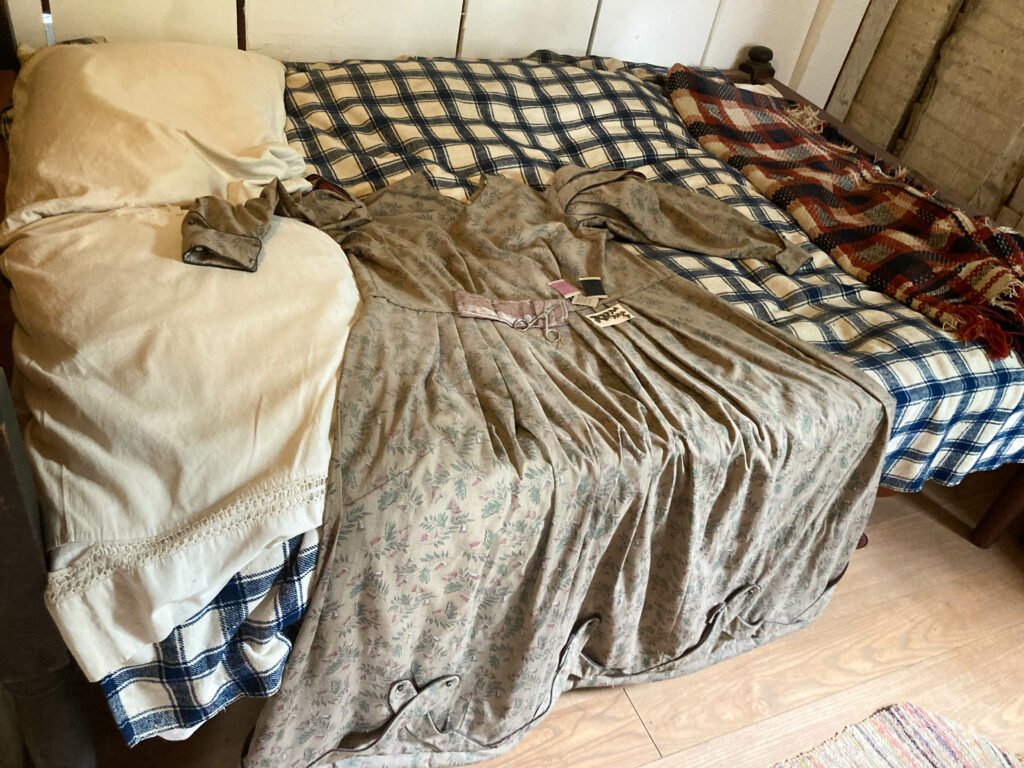 Soon after, Emma and Joseph moved back to Harmony.  Around this time, Joseph claims to have begun using the seer stones to translate the plates from “reformed Egyptian” into English.

In February 1828, Martin Harris travelled to Harmony to serve as scribe to Joseph, Jr.  By June, the two had prepared 116 pages.  Harris took them back to Palmyra to show them to his disbelieving wife.

On June 15, Emma Smith gave birth to the couple’s first child, a son they named Alvin, who died the same day.  Two weeks later, Joseph returned to Palmyra to reclaim his manuscript.  In the kitchen of the frame house, Harris told him that the pages had been lost. 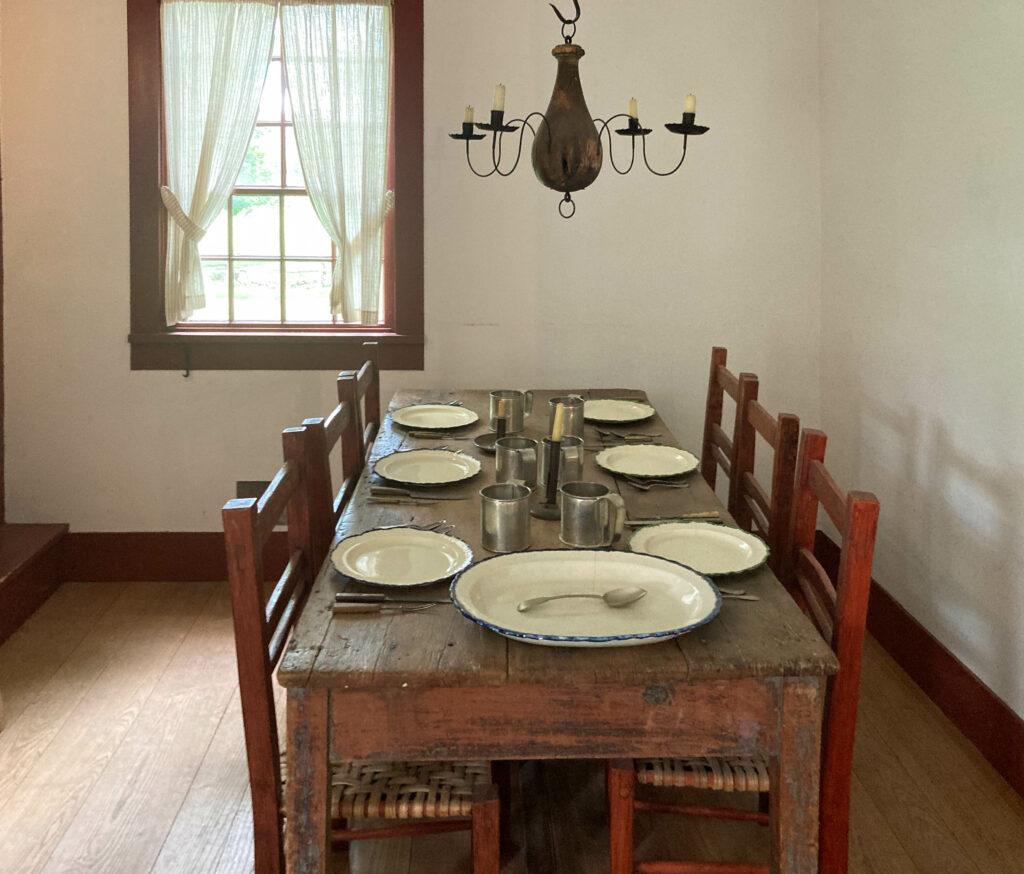 Joseph returned to Harmony and claimed that the angel had taken away the plates.  He briefly attended a Methodist church with Emma, until a cousin of hers objected to the “practicing necromancer”.

In September, he claimed that the angel had returned the plates to him.  He completed the manuscript in 1829.

The Book of Mormon was published in Palmyra in 1830.  Soon after, Joseph, Jr., and his adherents organized a new religion with the Book at its heart.  In the face of strong local distrust, fueled at least in part by the old Chenango County case, and threats of violence, the Smiths and their followers left New York within a year.

The Joseph Smith Family Farm is open for tours with friendly Mormon “sister missionaries” who guide visitors around the property and inside the reconstructed log house and the original frame house.  You can check in at the welcome center at 843 Stafford Road, Palmyra, New York.  There is ample parking.  Allow 1 to 2 hours.

For a biography of Joseph Smith, Jr., I recommend No Man Knows My History:  a Life of Joseph Smith, by Fawn Brodie.  For a memoir of modern Mormonism, I suggest Secret Ceremonies:  a Mormon Woman’s Intimate Diary of Marriage and Beyond, by Deborah Laake. 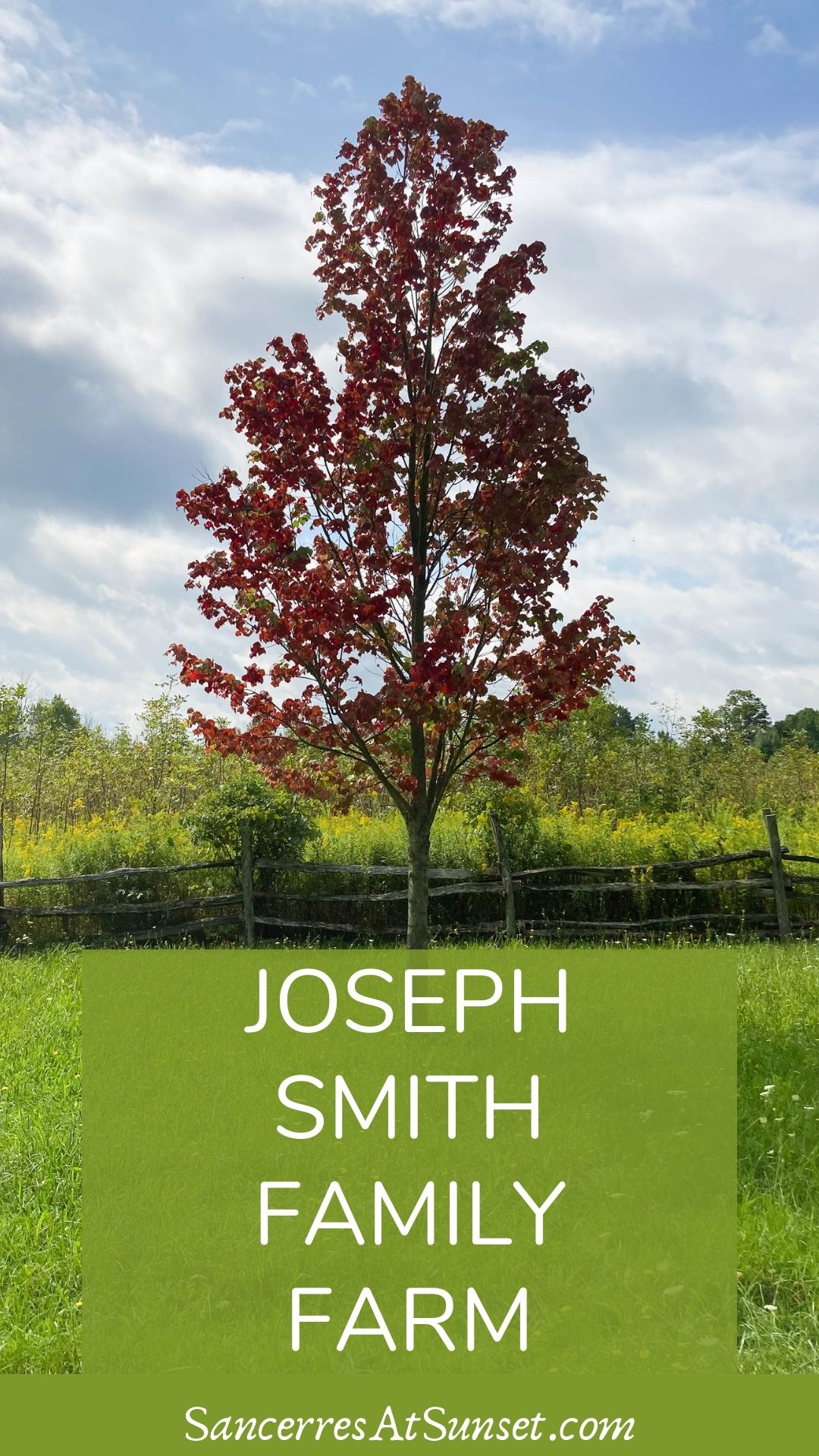