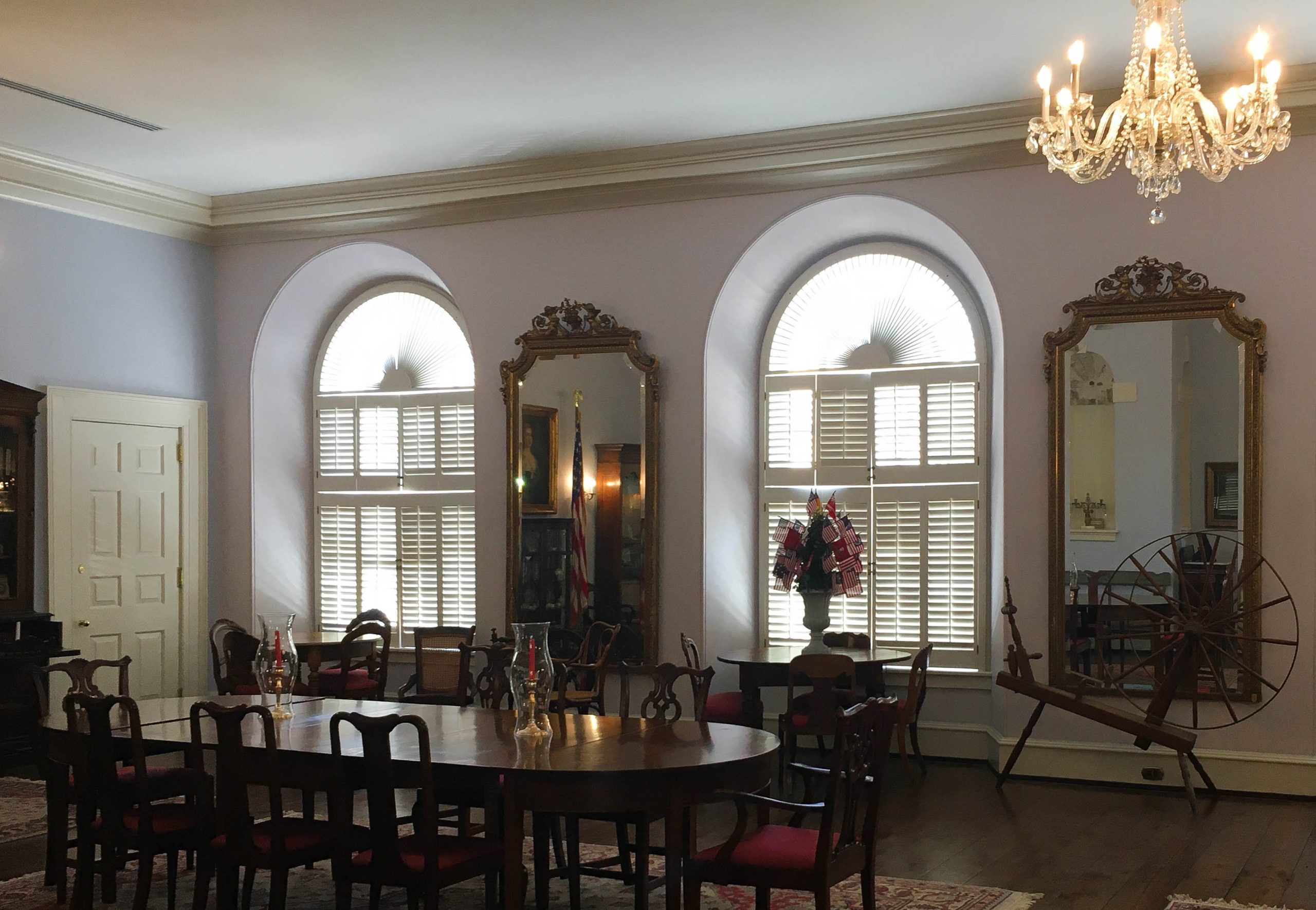 The Old Exchange and Provost Dungeon is a quirky museum in Charleston, South Carolina, and a backdrop to some of the defining events in American history.  It ranks near Boston’s Faneuil Hall and Philadelphia’s Independence Hall among the most significant still-standing buildings from the Revolutionary era.

Finished in 1771, the two-storey, Palladian-style, stone Exchange and Custom House is a model of Southern elegance, with its arched doorways and white trim.  But beneath the beautiful building, almost a century older, is the creepy-cool, dark and dank, brick dungeon.  Together they fuse the gloriousness and the ugliness of American history, and force visitors to face how the glory was in many ways built upon the ugly.

Nearly two weeks before the rowdier Sons of Liberty dumped British tea into Boston Harbor, Charlestonians on December 3, 1773, seized 257 chests of the product from the ship London and stored them at the Exchange.  Years later, with the Revolutionary War raging, they auctioned it off to pay for muskets.

South Carolina held its Constitutional Convention in the building’s Great Hall, and became the eighth state to ratify the document on May 23, 1788.  Three years later, the room held a ball for President George Washington, then on his Southern Tour of our newborn nation.

But not all the building’s history is so illustrious.  By far the most intriguing part of the building is the dungeon, which was used as a prison. 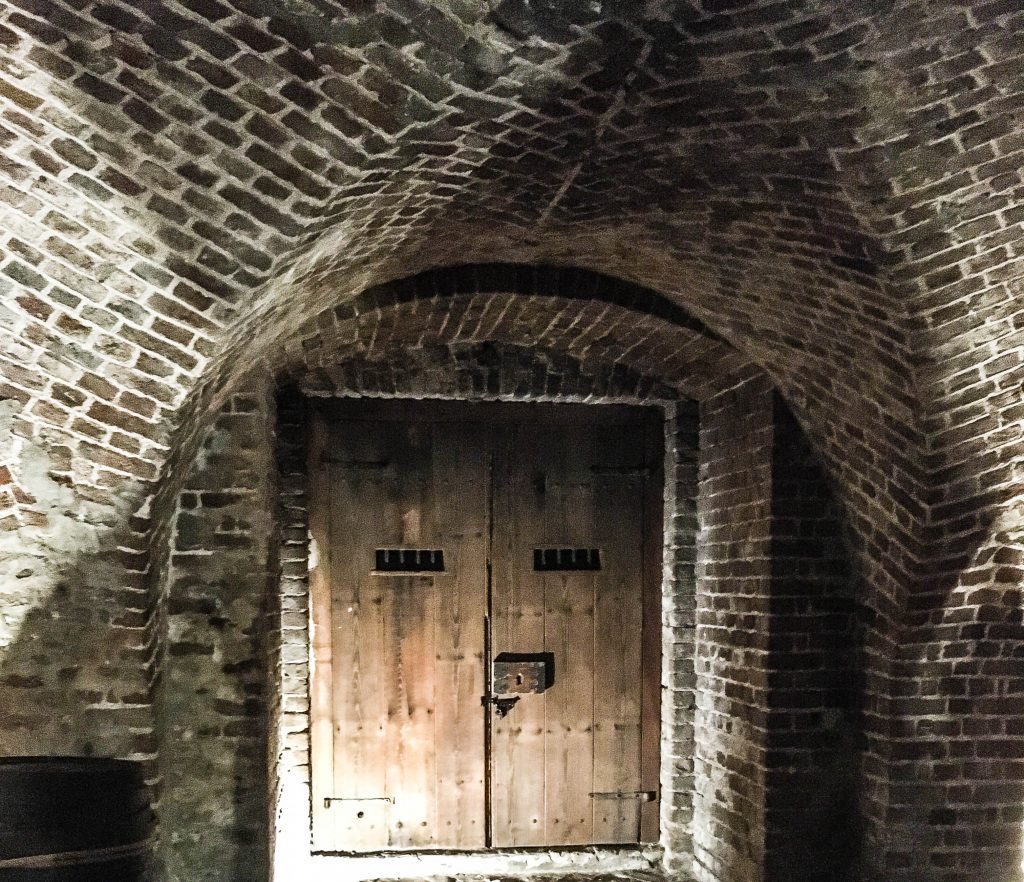 In 1718, the pirate Blackbeard and his compatriot Stede Bonnet blockaded Charleston Harbor and took hostages, demanding as ransom medicinal mercury, which was used at the time to treat syphilis.  Blackbeard was subsequently killed in battle, but Bonnet was captured and held for a time in the dungeon before being hanged at nearby White Point.

Decades later, in 1780, between the Charleston Tea Party and President Washington’s visit, the British captured Charleston and used the Exchange building as a barracks and the dungeon as a provost, a military prison.  One story that the museum emphasizes is that of Isaac Hayne, a soldier in the Continental Army at the time of the siege.  He was captured but then released and allowed to go home to his family.  But two months later, he was ordered to return Charleston and sign an oath of allegiance, declaring himself a British subject willing to fight for the British army.  If he didn’t sign, he’d be imprisoned.  He balked at the notion of turning on America, but his entire family was stricken with smallpox, which had already taken the life of one of his children, and he was desperate to return home.  A British commandant assured Hayne that he could decline any future orders to serve in the British army.  He signed and returned home.

In 1781, the following year, Hayne was ordered to report for duty in the British army.  He considered this a breach of contract and rejoined the Continental Army.  He was tasked to a successful mission to capture General Andrew Williamson, a former Continental soldier who had turned Tory and joined the British army.  Hayne was then captured in the wake of a British ambush intended to rescue Williamson.

Hayne was declared guilty of treason and espionage, without trial, and held in the provost dungeon until he was hanged on August 4, 1781, at the age of 36, at White Point like Stede Bonnet.  But if the British thought they were teaching occupied Charleston to accept the Crown’s rule, they thought wrong.  Outraged by what they considered an unjust execution, approximately 2,000 men joined the Continental Army in South Carolina under General Nathaniel Greene, helping turn the tide of the War in the Americans’ favor. 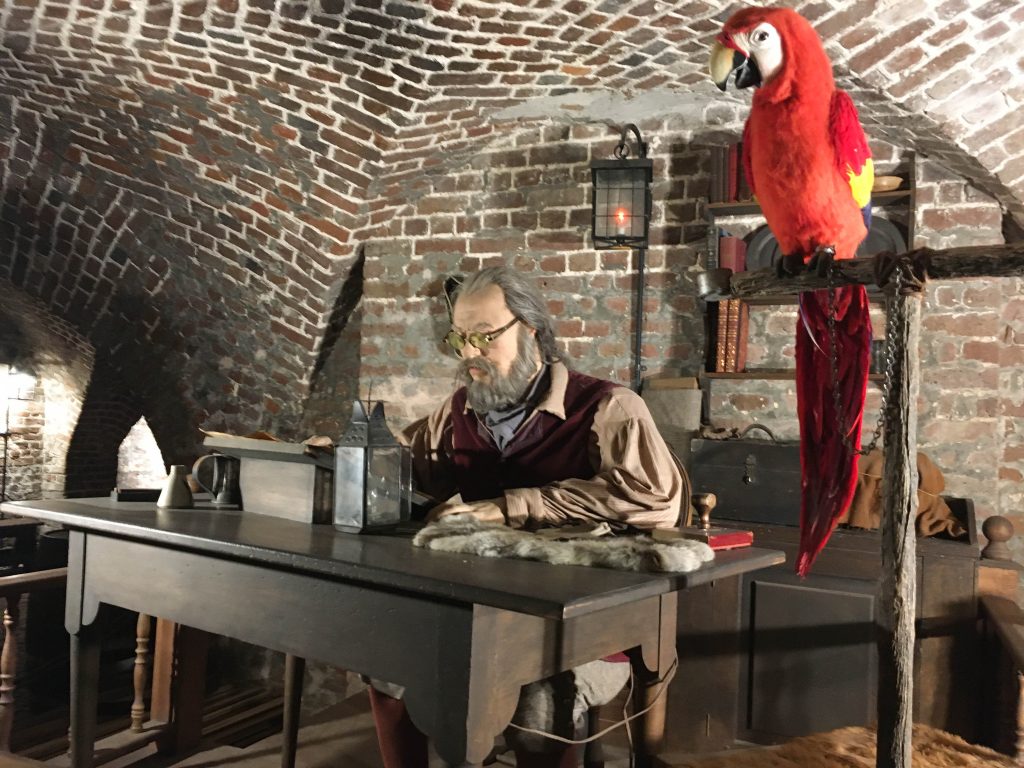 Today, the dungeon holds exhibits illustrating the various uses of the building, including its early function as a customs house.  It also showcases the Half-Moon Battery, the only standing, publicly viewable portion of the original city wall, finished in 1701 and excavated from under the building in 1965. 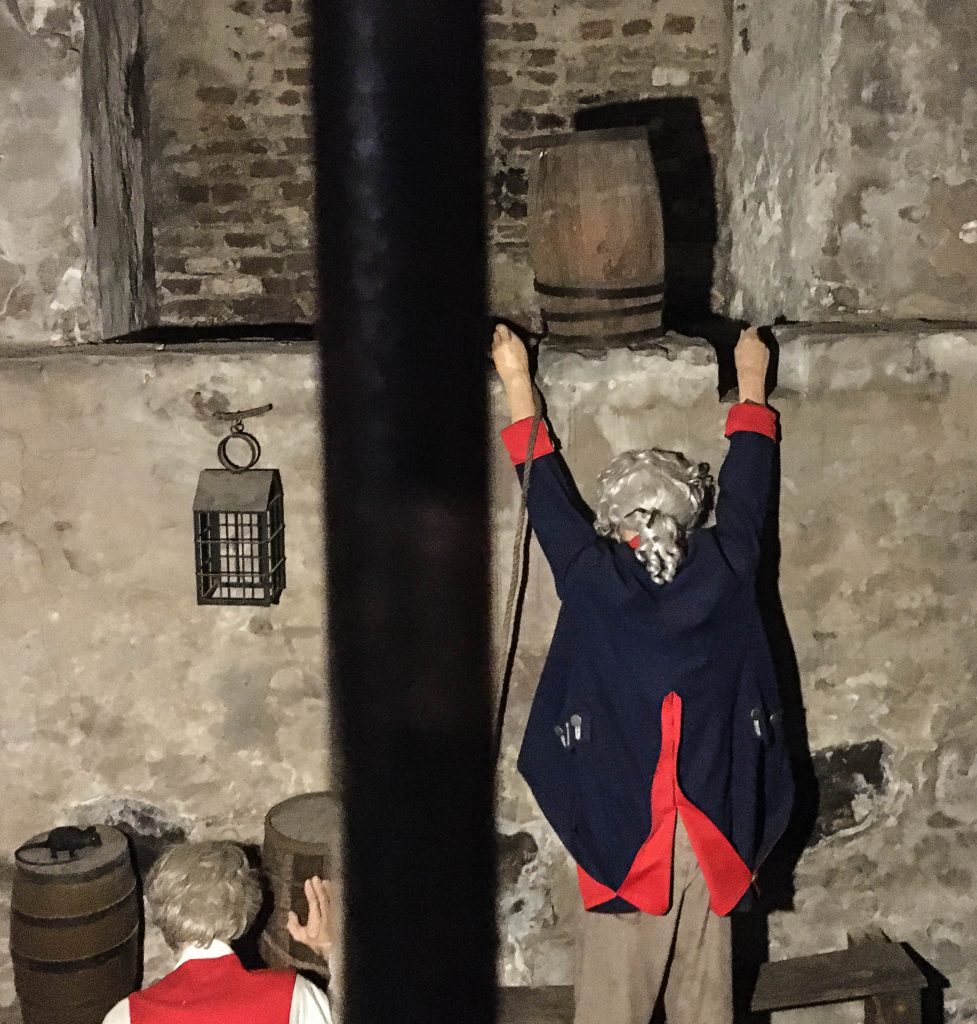 Visitors can imagine the ghastly conditions in which the prisoners were kept, tightly packed in rat-infested squalor, likely to drown if the Harbor-level dungeon flooded before they were taken out to be hanged. 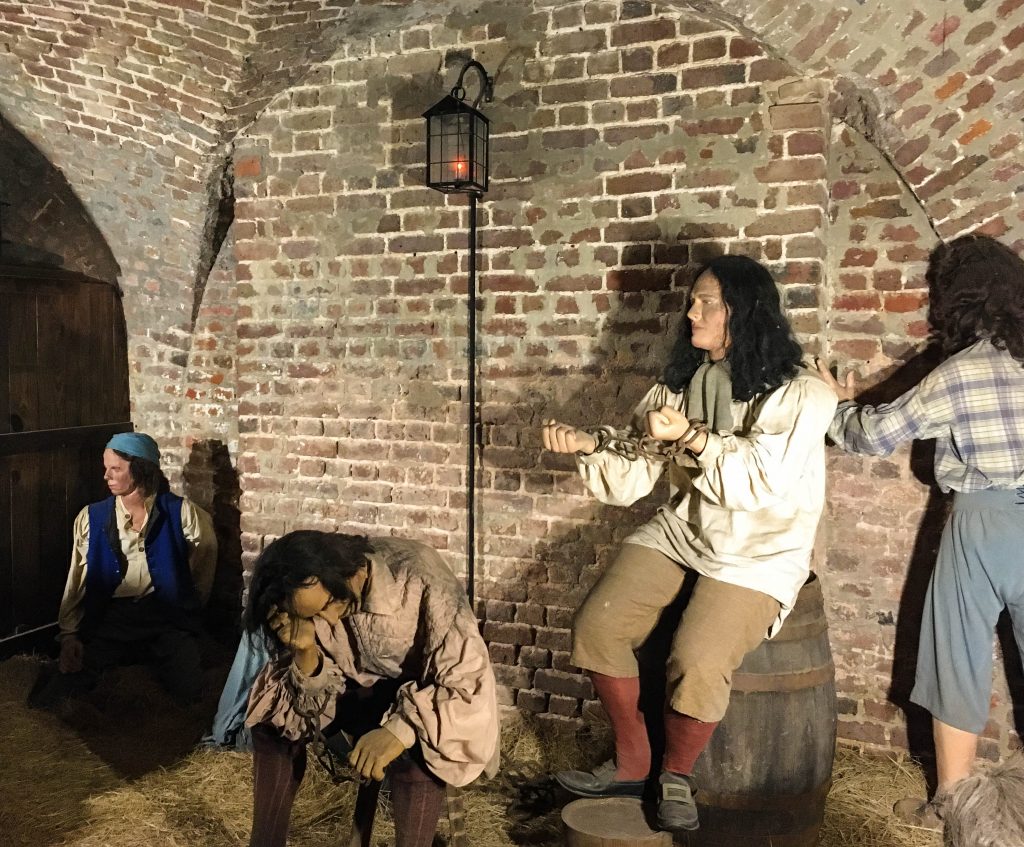 But even this isn’t the full horror of the building’s history.

The Exchange and its immediate outside area was a common site for slave auctions in Charleston. 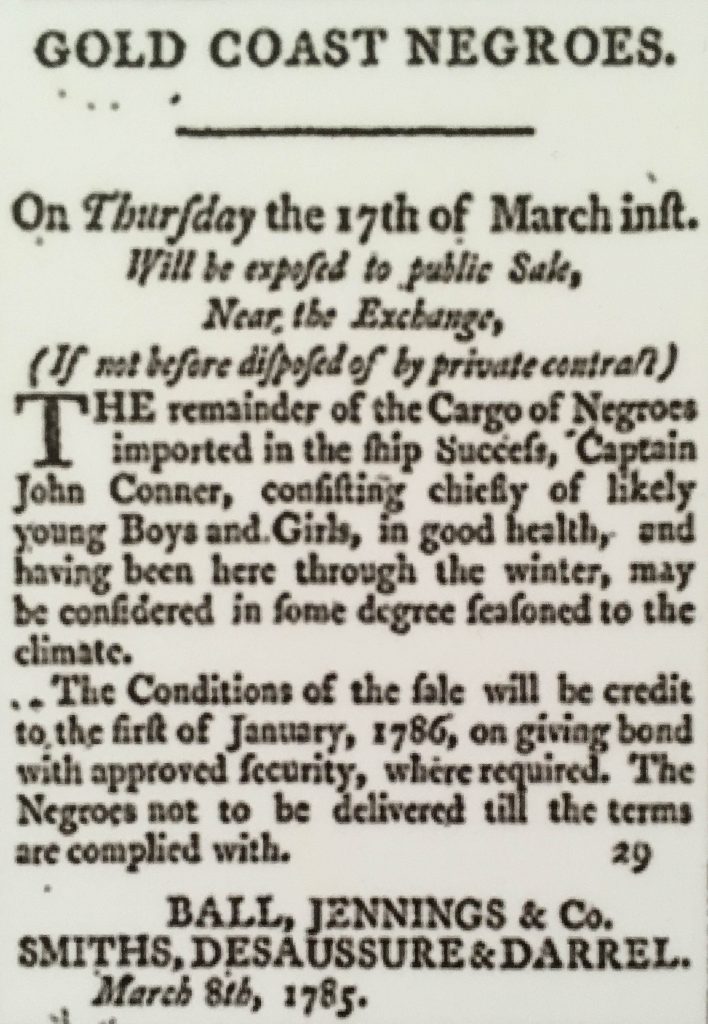 Thousands of people were bought and sold just steps from the stately building, and occasionally inside it. 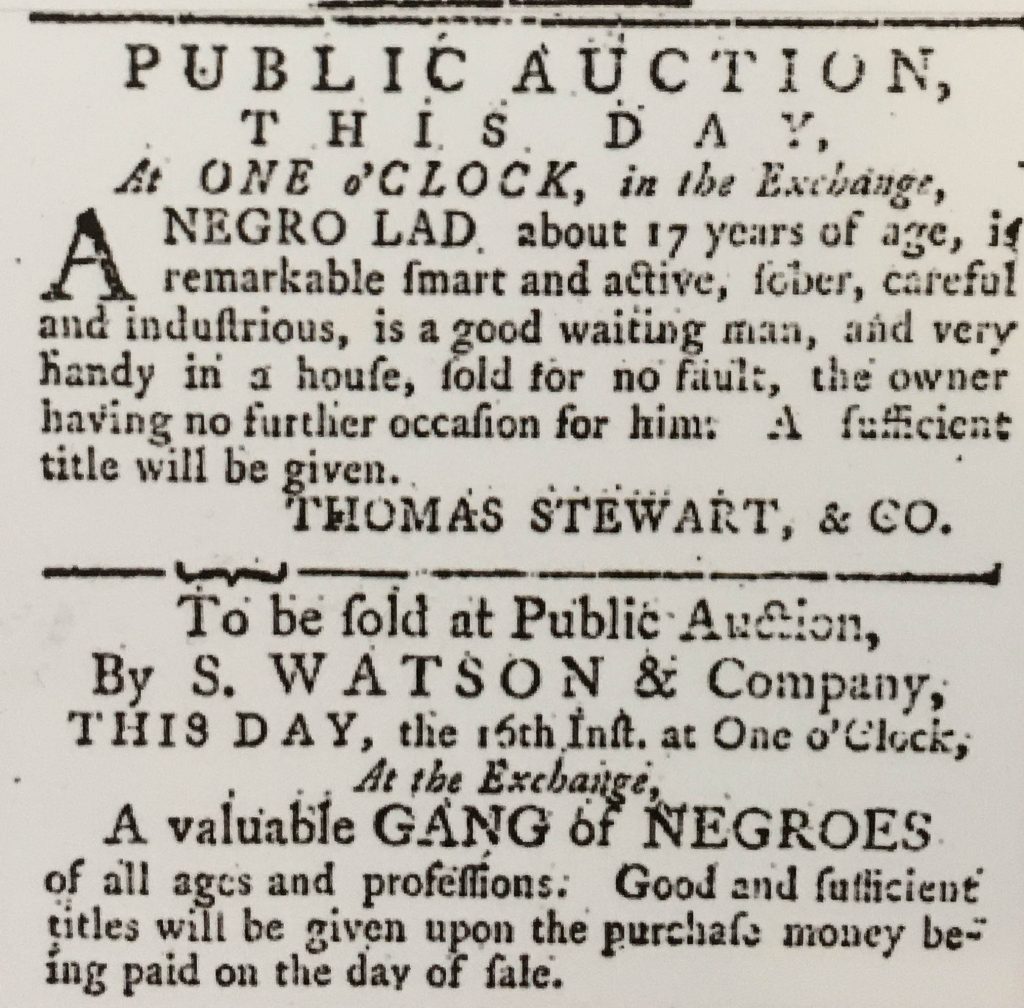 Exhibits in the main building give a sense of the cruel reality of slavery at one of its most notorious sites, where people were dehumanized and sold to be exploited as property for cheap labor, where families were broken apart, where even those not on the auction block would gather and watch in hopeful desperation to see what would happen to relatives and friends, knowing they may never see one another again.

The Old Exchange and Provost Dungeon does a fine job of teaching both the glorious and the ugly of South Carolina’s, and America’s, history.  As Margaret Thatcher noted, America has a unique place in the world as the only nation founded on ideas and ideals.  And part of our glory is the way that those ideas and ideals have triumphed in time over the ugly, a triumph visitors can experience at the Old Exchange and Provost Dungeon. 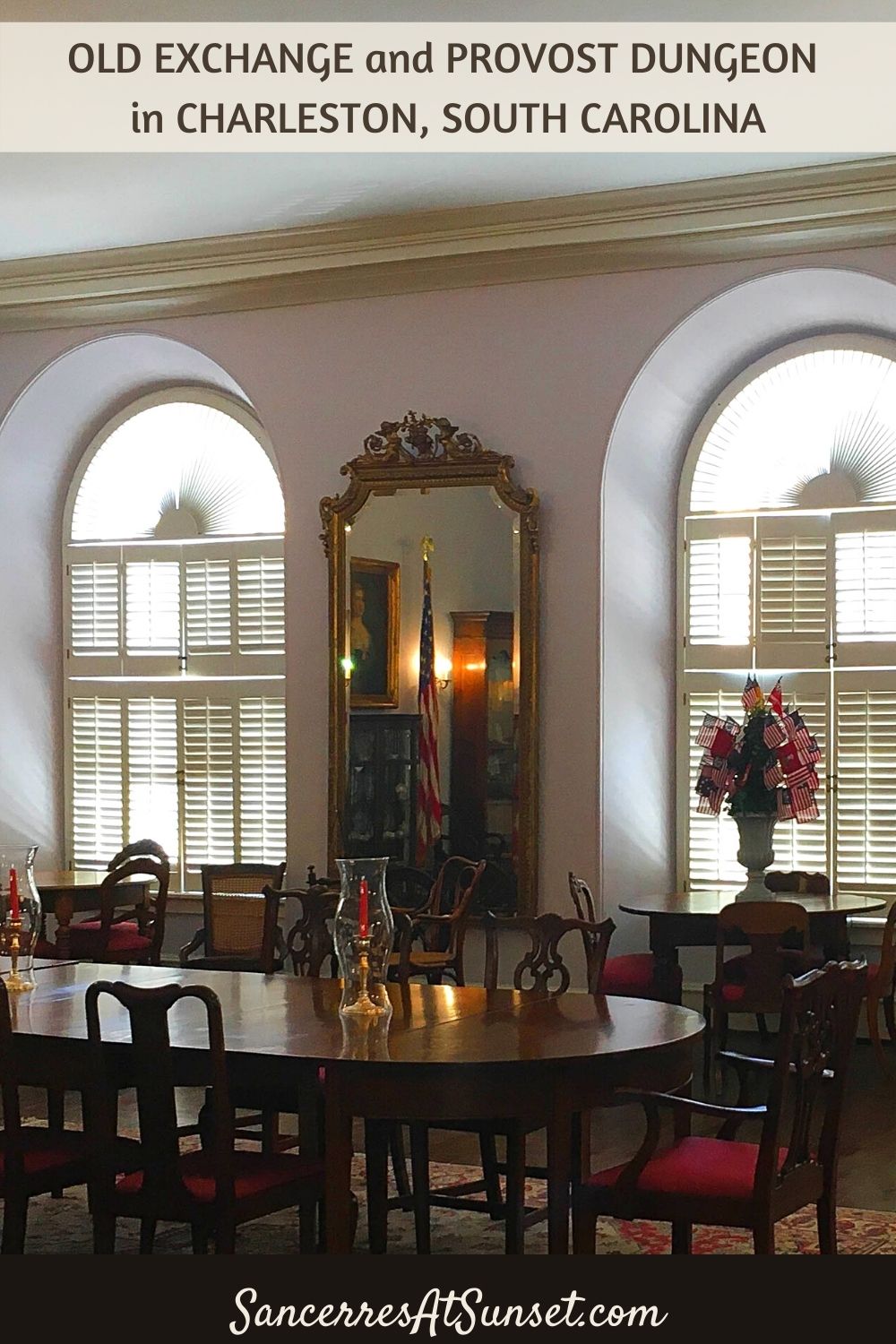