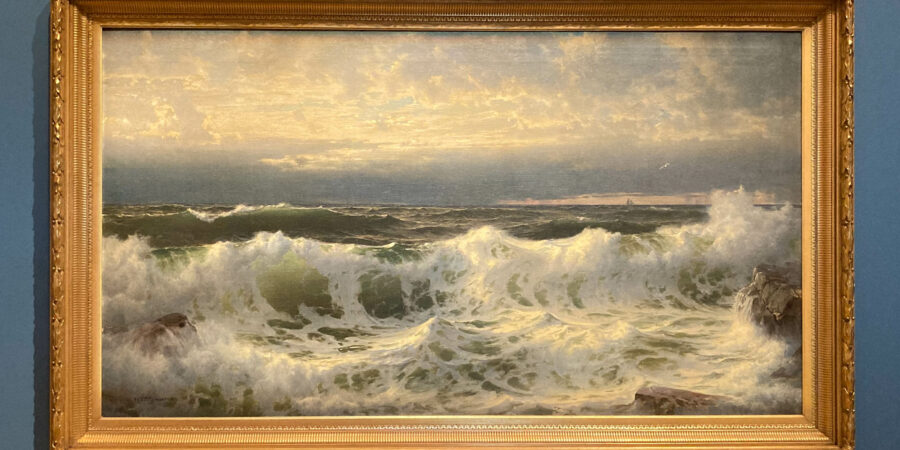 The Peabody Essex Museum in Salem, Massachusetts, is the oldest continually operating and collecting museum in the United States.  Its complicated history reaches back to the cusp of the 19th century, when our newborn nation was between wars with Britain and 170-year-old Salem was one of her largest cities and a world-class seaport.  Salem ships exported codfish and imported sugar, molasses, and Sumatran pepper from the Indies and tea, art, and porcelain from China.  This Old China Trade was the beginning of international relations between the ancient Asian and the nascent American nations.

The China Trade also meant a means to edify the common citizens who would not enjoy much opportunity to travel.  In 1799, 22 Salem mariners founded the East India Marine Society as an organization of Salem ship captains and supercargoes who had sailed beyond South America’s Cape Horn or southern Africa’s Cape of Good Hope.  (A supercargo is the shipboard business representative of the owner of the cargo being transported in the ship’s hold.)  The Society’s functions were essentially philanthropic.  It supported the widows and orphans of men lost at sea.  In addition, returning mariners shared their experiences and what they’d learned from them with their fellow seamen, in hopes of increasing the latters’ chances of survival.  Finally, the Society’s third function was to establish a “cabinet of natural and artificial curiosities”, in other words, a museum of cultural artifacts discovered abroad. 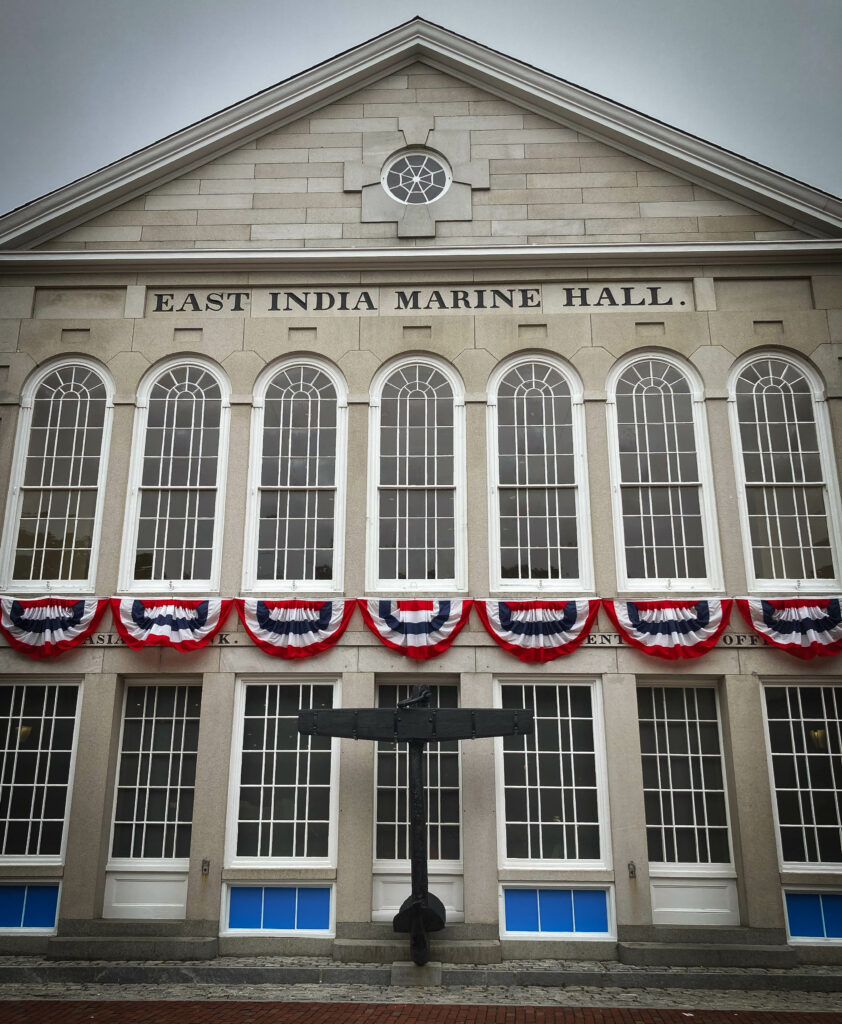 Today, after two centuries of mergers and acquisitions, what has become the Peabody Essex Museum exhibits vast collections of American, African, Asian, Oceanic, and maritime art.

The Museum also maintains several historic houses.  One of the most intriguing is Yin Yu Tang, an authentic Chinese home built toward the end of the Qing Dynasty for a prosperous merchant and member of a prominent family named Huang.  Over the course of two centuries, eight generations of the family lived in the home in the small village of Huang Cun, about 150 miles from Shanghai.  In the 1980s, the family left the village and abandoned the home; in the 1990s, the house was dismantled and transported to the United States, where it was rebuilt and put on display by the Peabody Essex Museum.  The house’s notable features include 16 bedrooms and feng shui elements like a central courtyard.  And then there’s the speaker.  Installed at the beginning of Mao’s dictatorship, it blasted propaganda and could not be shut off.  Its purpose was to root out “ideological impurities” and to indoctrinate the people into Maoist communism.

But not everything in the Museum’s intriguing collections comes from half a world away.  A permanent exhibit called Salem Stories, among others, highlights the city’s early maritime importance, and its highs and lows throughout the centuries.  In 1877, Alexander Graham Bell placed the first long-distance telephone call, to Boston, from Salem’s Lyceum Hall.  But industrialization meant tragedies as well as triumphs.  In 1914, a series of explosions in one of the city’s leather tanneries sparked the Great Salem Fire, which caused $15 million in damage, and left tens of thousands homeless and/or jobless, many of them part of the city’s then-vibrant French-Canadian community.  My own Mémère traipsed with her year-old son down to the beachfront Forest River Park to help serve food to those who’d suddenly lost everything, though I imagine she stopped by the time she gave birth to my grandmother 10 days after the fire. 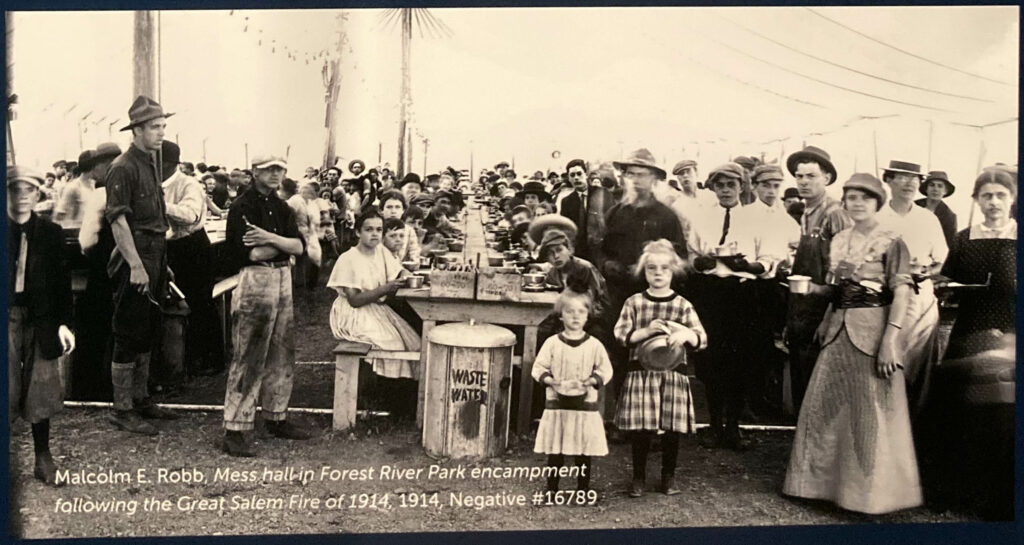 My favorite displays tend to be the maritime exhibits.  Earlier this summer, my aunts and uncles and I explored the special exhibition “In American Waters:  the Sea in American Painting”, which runs through October 3.  Featuring more than 90 works, the exhibition portrays the beauty, danger, and transformative power of the ocean as it highlights the importance of the sea in work and play, from shipping to beach-combing. 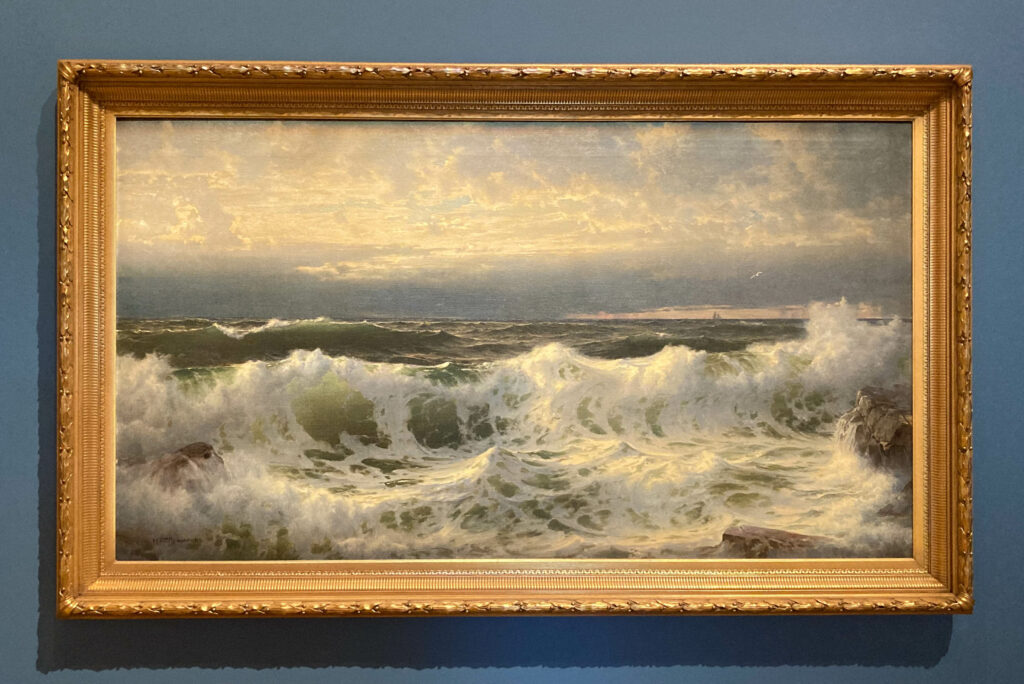 One reason why exhibitions like this are important is that displaying together very different works that share a common theme illuminates paradoxes and opens questions.  Poignant juxtapositions appear in the exhibition’s section called “Voyages”, which includes shipboard paintings both of free immigrants and captured slaves, two groups travelling to America in horrid conditions, but one in liberty and hope, the other in bondage and humiliation. 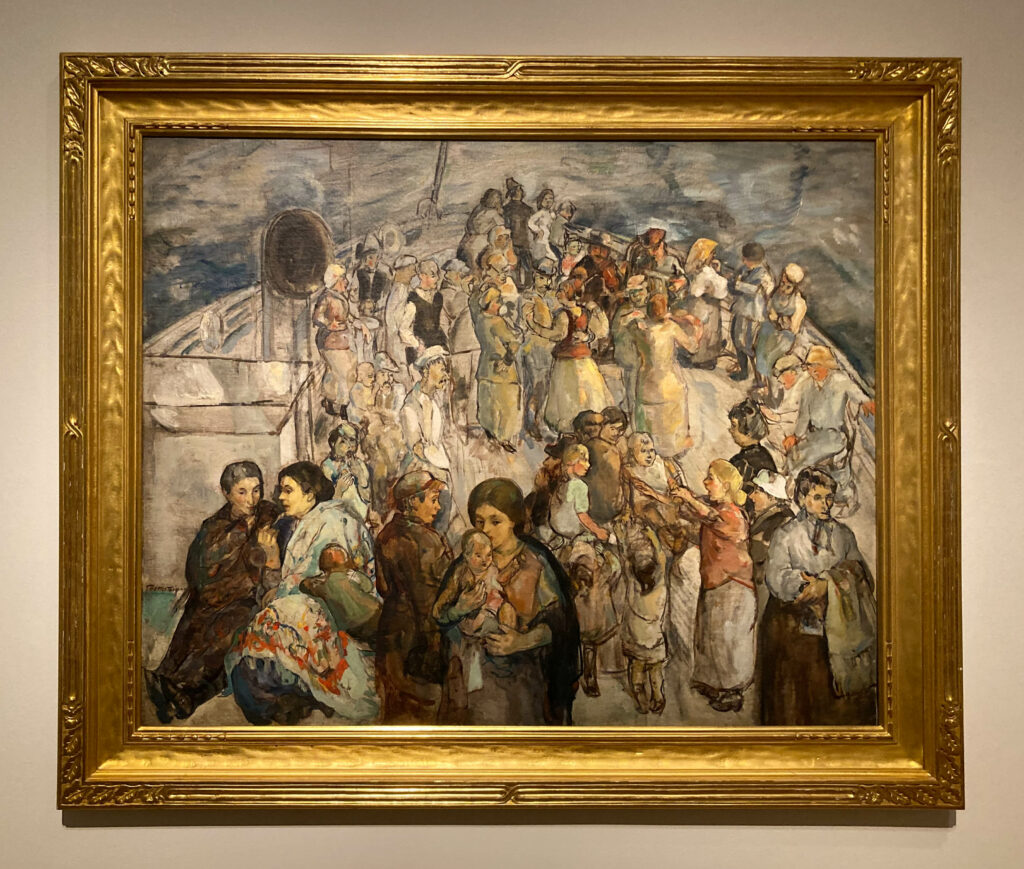 “The Immigrants”, a 1923 oil painting by Theresa Bernstein, depicts third-class passengers crowded on a deck of the RMS Aquitania, a Cunard ocean liner Christened in 1913 by the Countess of Derby.  She was considered a luxury ship, but while first-class passengers enjoyed the promenade deck, those below in steerage were accommodated closer to the furnaces, where the vessel could carry more than 1,400 people, staying in two- to four-berth rooms, dining at common tables in the third-class saloon, and sharing only three bathrooms.  And even after the vessel put in port in New York, steerage passengers could be held aboard ship for several days awaiting immigration inspection.  But they were the lucky ones. 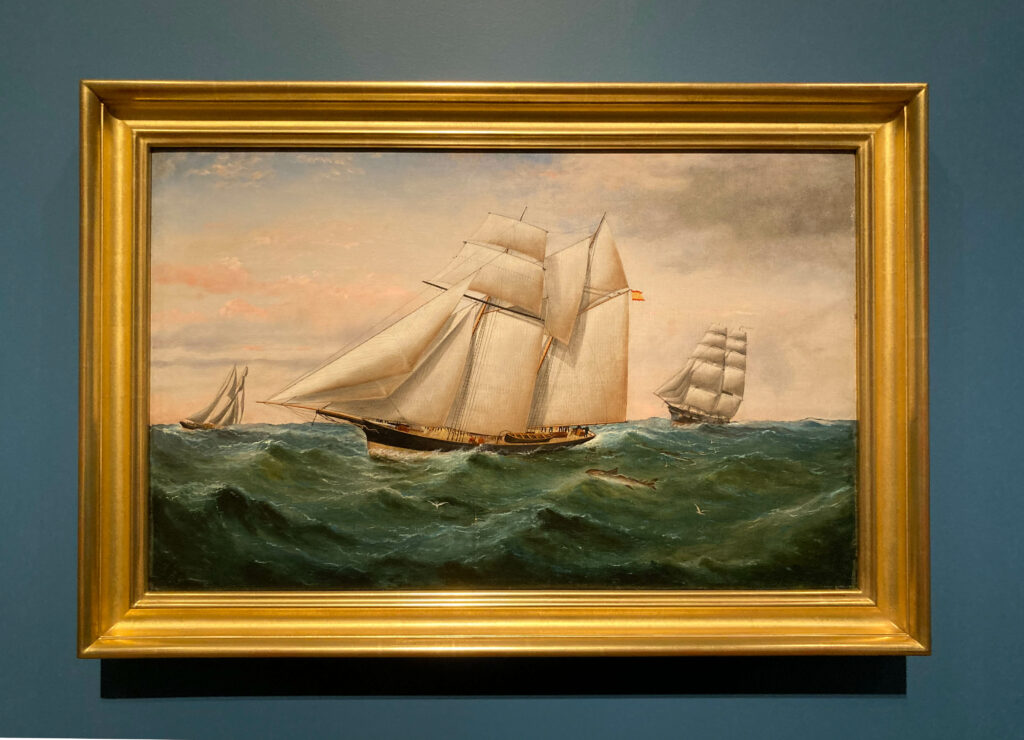 “Slave-Yacht Wanderer,“ painted by William and probably Mary Yorke during the late 1880s, is beautifully done, but the closer you look, and the more you learn, the more chilling it becomes.  It depicts one of the last known ships engaged in the illegal slave trade, evading the patrol sloop USS Vincennes, while crewmen toss black bodies overboard, as sharks gather.  The Wanderer‘s story is fascinating, haunting, and maddening.  She was originally built in 1857 as a luxury racing schooner, and by all accounts she was yare, capable of up to 20 knots, with gleaming brass and wood, and even a library of leather-bound books.  But the next year, she was purchased by a group of “fire-eaters”, Southerners who wanted to expand slavery and reopen the Atlantic slave trade, which was outlawed in 1808 and later classified as a form of piracy, and thus a hanging crime, in 1820.  They had the ship retrofitted with a human-cargo deck, just below the main deck, and the awful paraphernalia of slavery–chains, shackles, manacles, collars.  The fire-eaters bought what’s believed to be 487 people on the coast of Africa and chained them cheek by jowl on this hidden deck, inches below the bespoke luxury of the yacht’s main deck, for the six-week horror of middle passage, iron-bound slaves on a ship built to hold leather-bound books.  By the time she put in port at Jekyll Island, a resort area off the coast of Georgia, 409 captives are believed to have remained alive, and eventually sold off to various plantations, the other 78 having died and been tossed overboard, or vice versa.  The fire-eaters were tried, and acquitted.  Less than three years later, the Civil War began, and the Union government seized the Wanderer and used her as a naval ship.  After the war, she became a legitimate commercial ship, until she was lost, presumably sunk, off the coast of Cuba in 1871.  As Martin Luther King, Jr., observed less than a century later, “The arc of the moral universe is long, but it bends toward justice.”

If you’re in Salem and looking for more than witch lore, the Peabody Essex Museum is a fine place to learn world history through the arts. 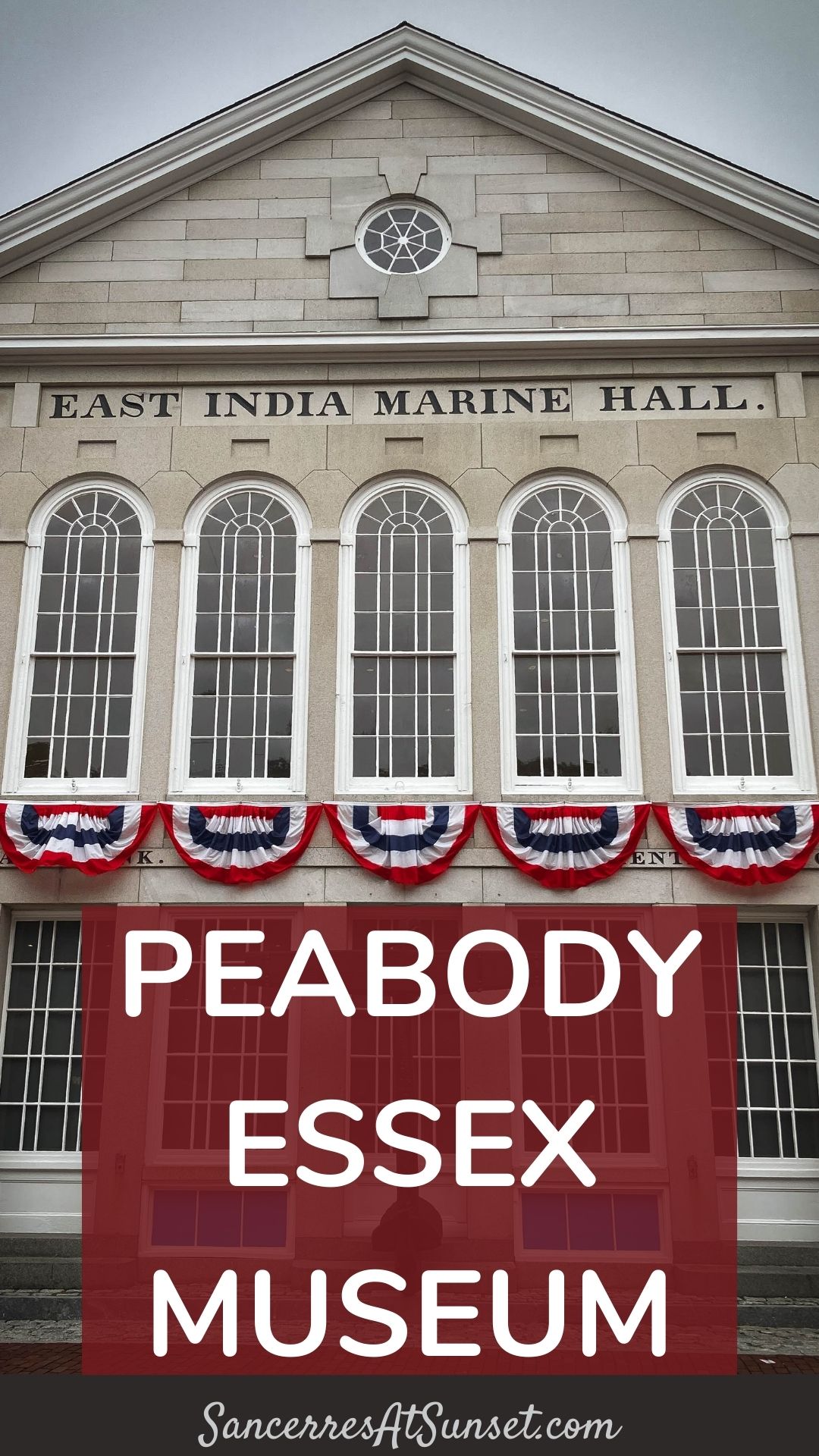