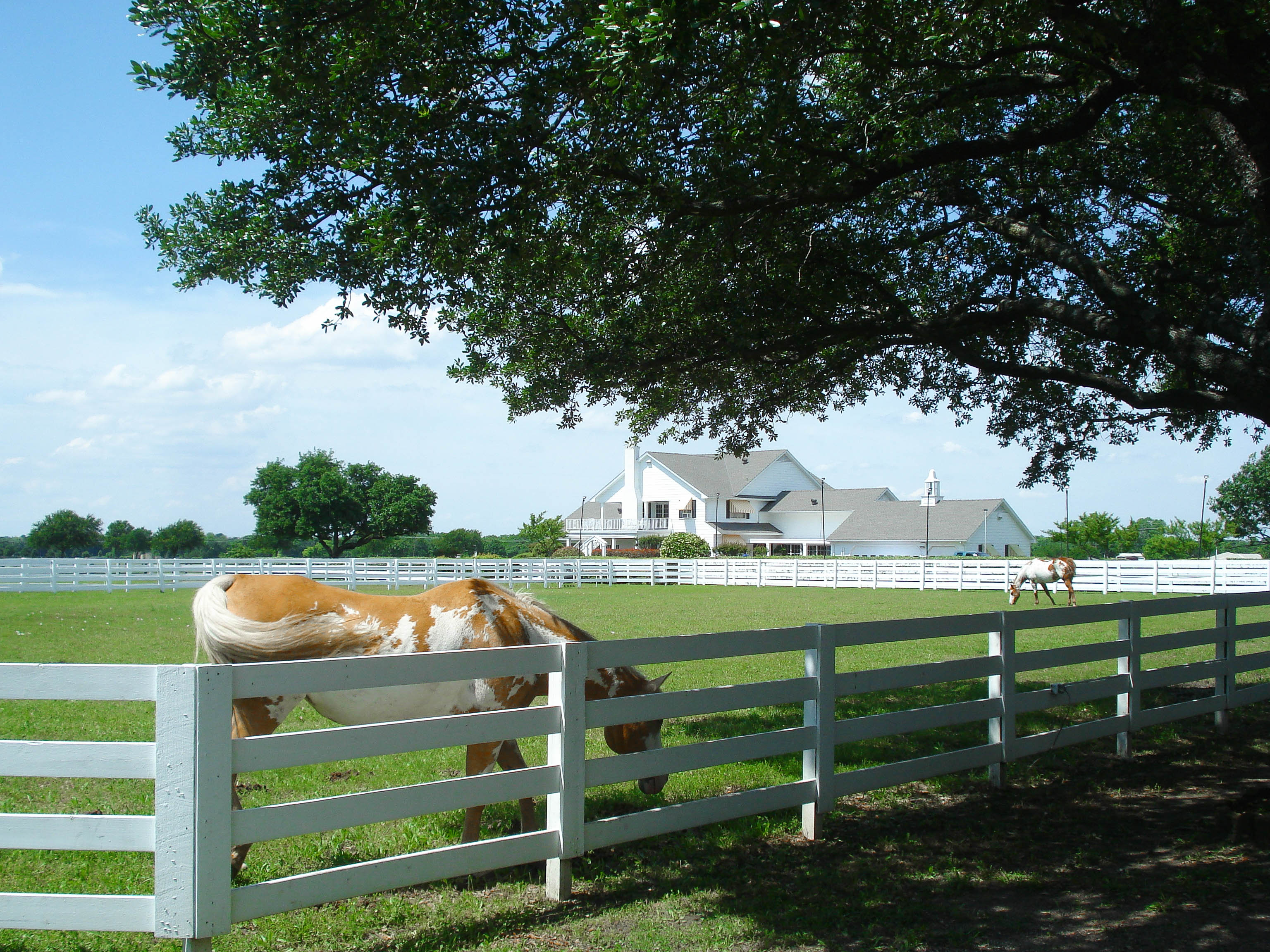 I drove eastward from New Mexico, and Texas stretched out before me.

I entered through the border city of El Paso, verified my U.S. citizenship at a checkpoint, and drove on toward my first voluntary stop in Texas.

In 1951, George H.W. Bush paid $7,000 for a home for his wife Barbara, daughter Robin, and son George W. In time, sons Jeb and Neil would be born while the family lived there. At 1,500 square feet, the single-storey house is surprisingly modest. Lots of big windows welcome the bright Texas sun into the dark shiny knotty pine rooms. But there is an aura of sadness in the air. This is the home where the Bushes lost Robin to leukemia when she was three years old. Years later, a still-heartbroken George Bush wrote to his mother:

“There is about our house a need. We need some soft blonde hair to offset those crew cuts. We need a doll house to stand firm against our forts and racquets and thousand baseball cards. We need someone who’s afraid of frogs. We need a little one who can kiss without leaving egg or jam or gum. We need a girl. We had one once.”

Happily, they would have one again; the family welcomed Dorothy Bush (Koch) a few years after moving to another home.

Today, the Midland house is a mishmash of historic house and museum. Some rooms are recreated as they would have appeared while the Bushes lived there. The living room is 1950s middle America.

The small kitchen is a mix of pastels and primary colors.

Other rooms host informational displays. The small master bedroom now houses an exhibit on Midland. The dining room features a display on the Bush family.

And Robin’s room, once a refuge from a “thousand baseball cards”, is now the home of an exhibit on the favorite sport of both Presidents Bush (and of this writer).

One wall honors great players of the 1950s.

Other displays recognize the importance of baseball in American culture.

The tour took about half an hour, and I continued driving through Texas.

The Texas plains are different from the South Dakota plains a thousand miles to the north, with more green trees and fewer blue lakes, peppered with oil drills. But the sky is the same, big and blue and open, with white cotton-candy clouds tapering toward the horizon.

I have been to Texas many times. I’ve twice road tripped to Houston, once from Nashville and once from Newport Beach. I’ve seen the State Capitol in Austin and the Alamo in San Antonio. And I’ve been to Dallas a few times. But there was still one place I’ve always wanted to visit:

My Dad loved Dallas. Maybe it offerred a welcome escape after a long week of supporting our family at a Boston insurance company. He’d start humming its catchy theme as we cleaned the kitchen after dinner on Friday nights. I caught the bug from him. I enjoyed J.R., and I loved the ranch mansion.

At 5,900 square feet, it’s hardly humble, but the rooms seem smaller than they did on the TV show.

I loved seeing the dining room and the living room as it was early in the show.

I was struck by how much Miss Ellie’s kitchen was like my mother’s, right down to the hanging planter.

And the big bedroom balcony offers a glorious view of the Ranch.

The tour takes about half an hour, and then guests are free to stroll around the house and the grounds. A small museum displays artifacts from the series, like the prop gun used to shoot J.R.

I was shocked to be the only person in my tour group of eight 40- to 60-somethings who could correctly answer the question: Who shot J.R.? (Kristin)

There’s a small graveyard for the characters who’ve passed away.

I loved the tree-lined driveway.

I was hoping to see Jock’s Cadillac. “Daddy always had the biggest model of the biggest car. American of course,” Bobby once said, and I chuckled with my Dad, who also drove a Cadillac. But it was hidden in a locked building with the draperies drawn. I could only peek through a crack in the drapes and glimpse its shiny silver, noting that the hood was up.

I hopped back into my silver Mercedes and continued east.

To find and book fully cancellable activities and tours in Texas, click here. 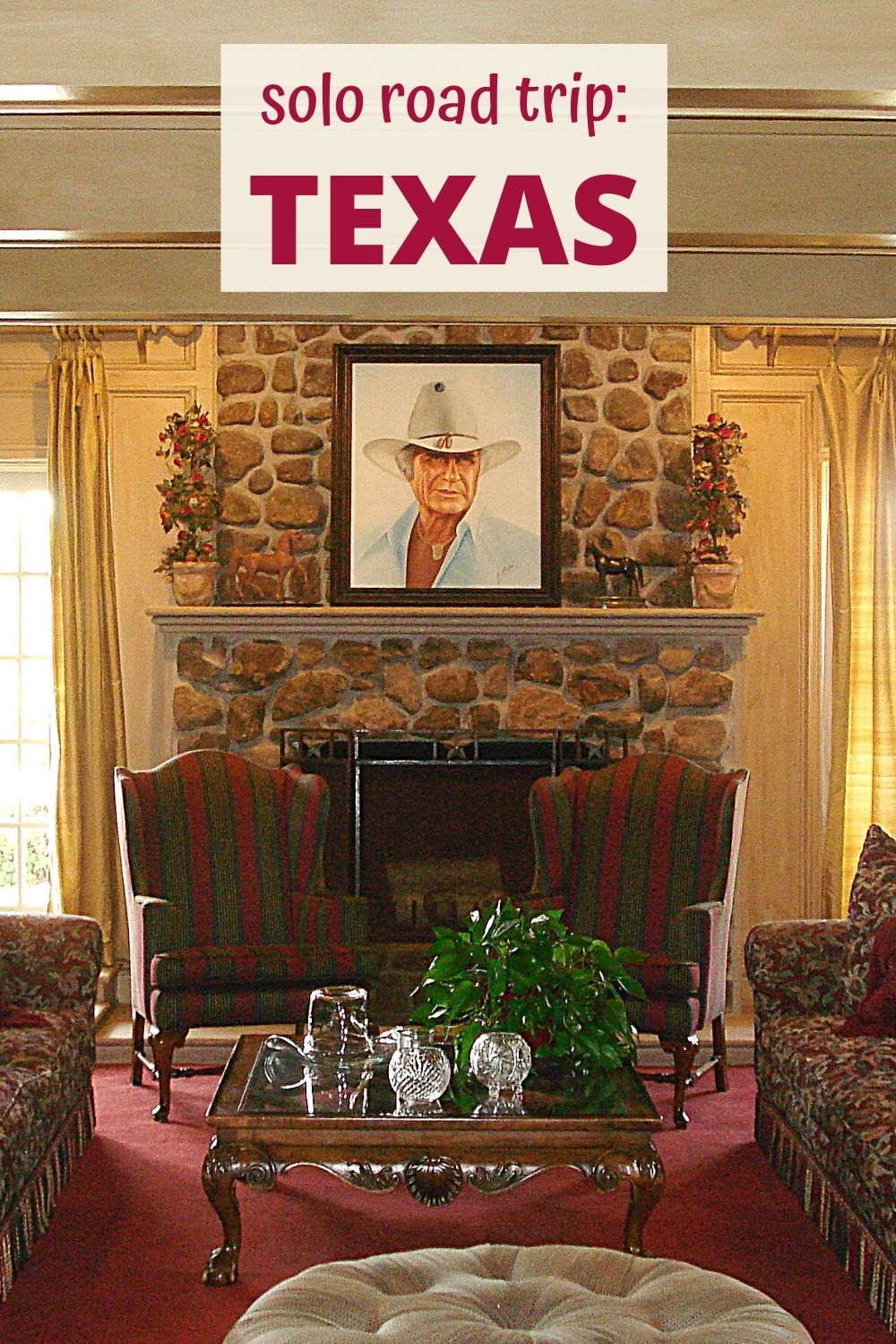 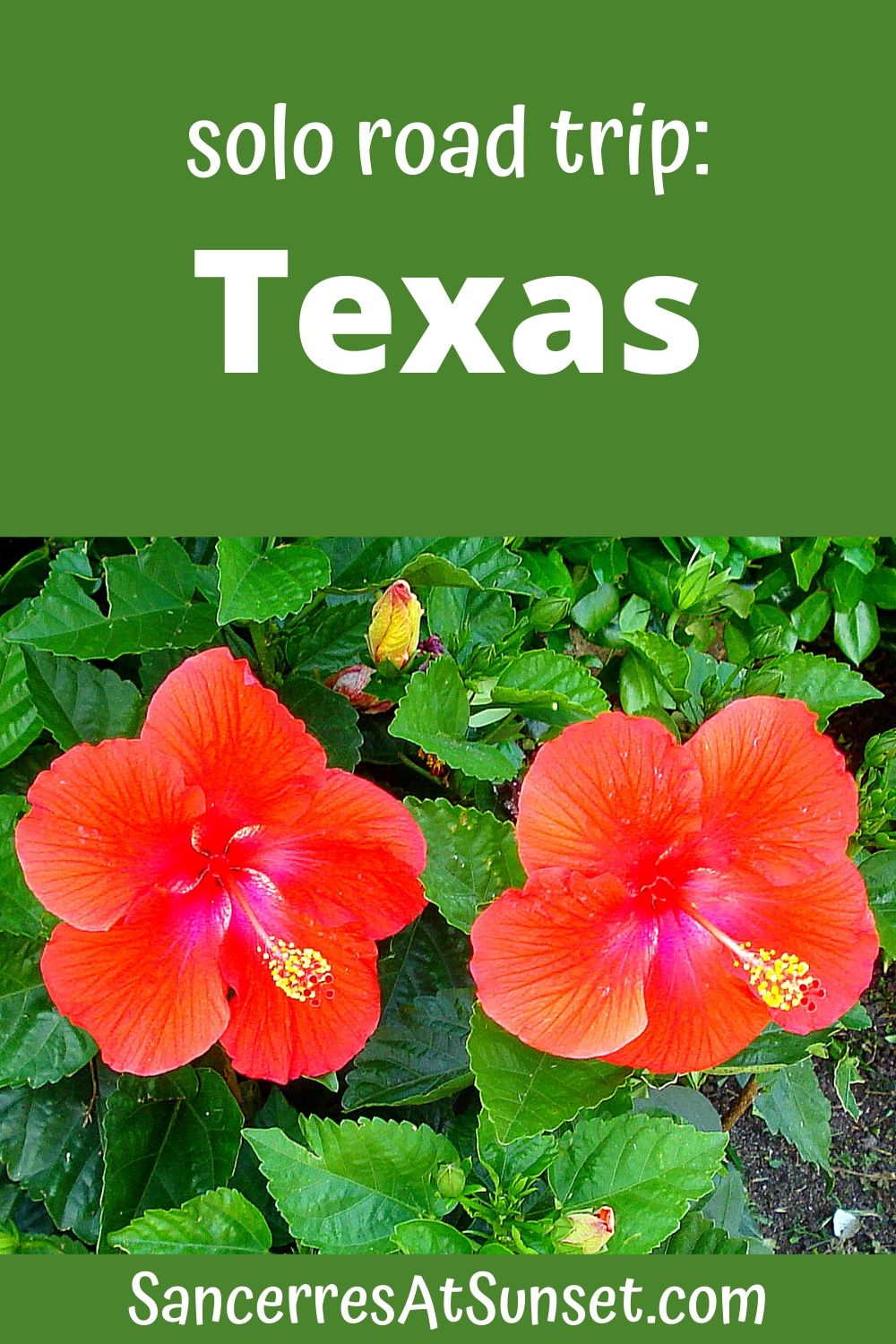 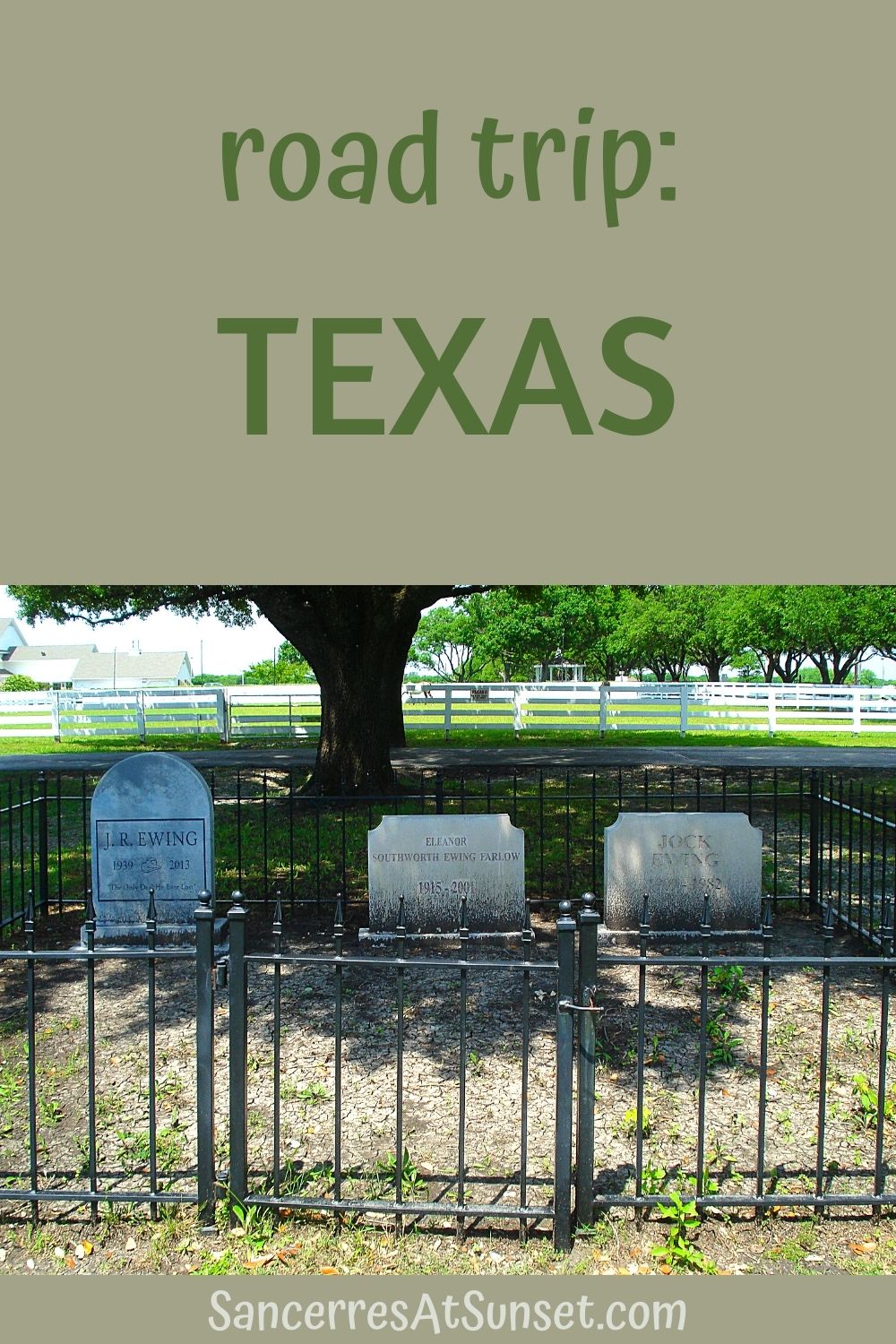 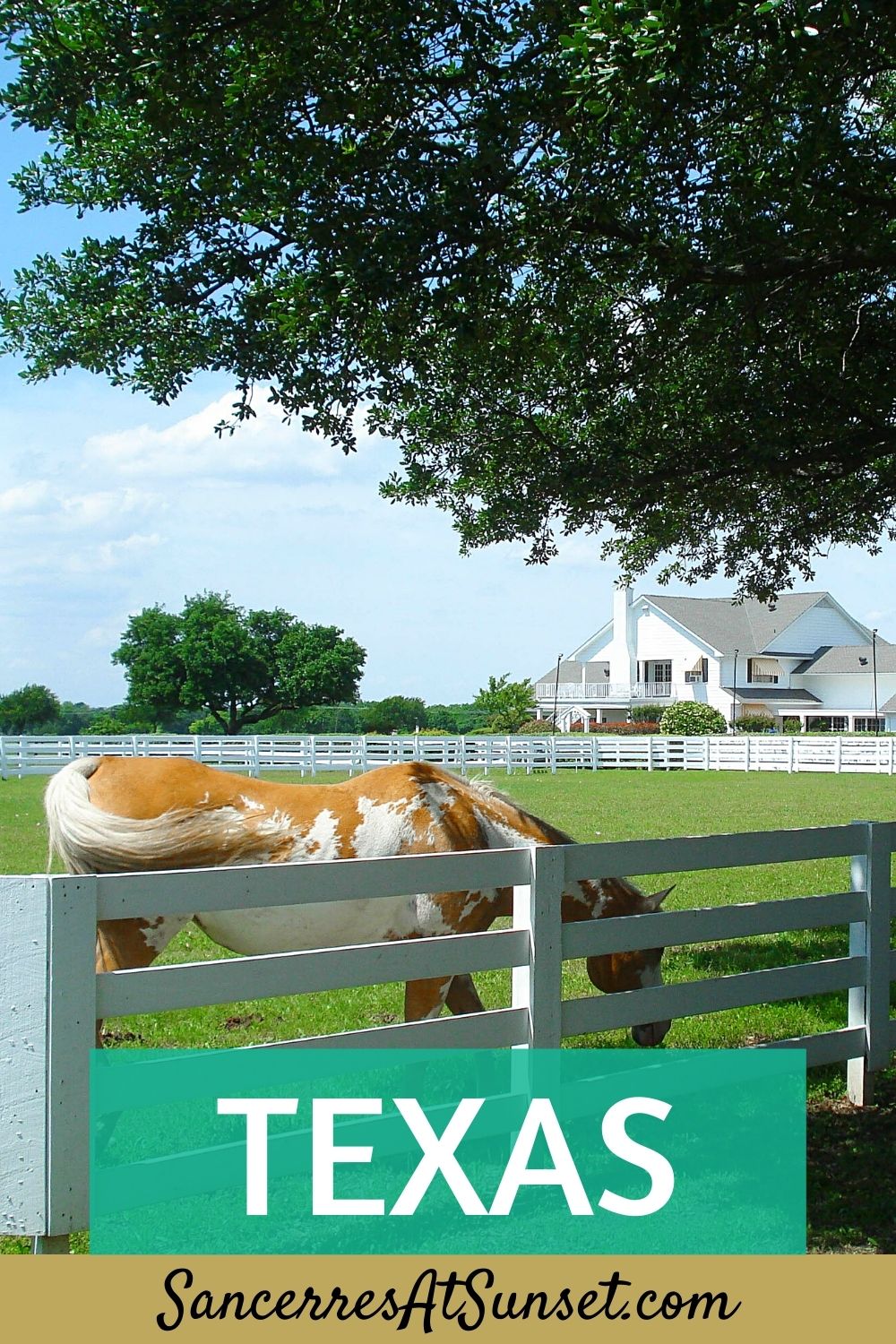