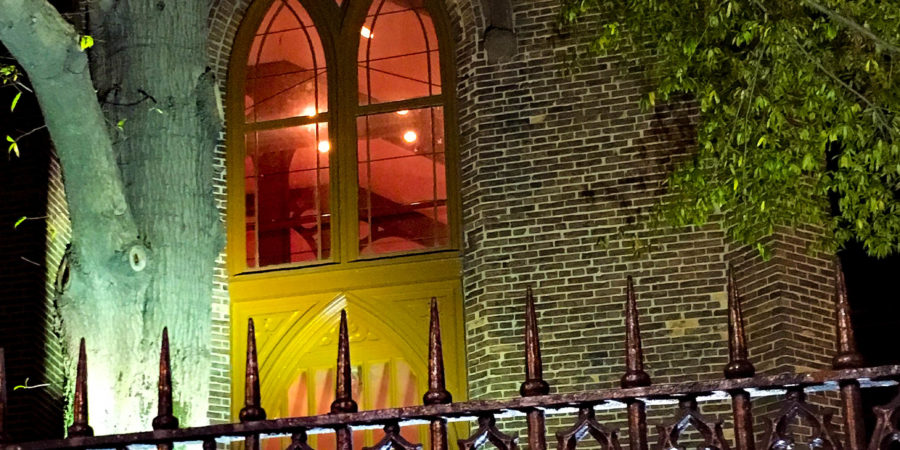 My eyes welled up as I pushed the needle through the red fabric.  I was replacing a button on a cape I’d found in one of my mother‘s closets, and imagined her sewing it on when she first made the garment.  It’s not something I have occasion to wear often, but I thought it would make for a fun frolic during Hallowe’en in Baltimore. 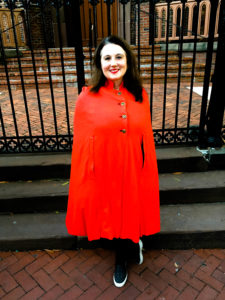 Westminster Hall is a Gothic Revival former church built in 1852 above a Burying Ground.  To avoid disturbing the graves, it was set upon brick piers, thus creating catacombs.  Its annual “Halloween Affair” offers brief tours of the church and cemetery and dramatic presentations among the graves. 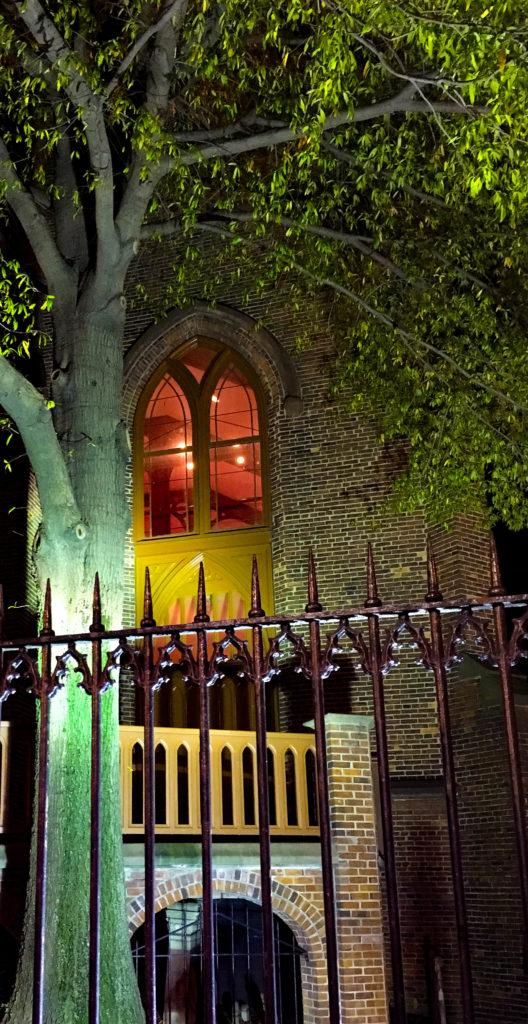 My companion and I passed through the iron gate and strolled into the Hall, pausing a few moments to listen as “Count Dracula” played the colossal restored Johnson and Son 1882 pipe organ. 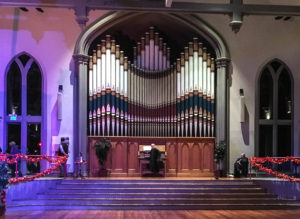 Then we stepped back out into the twilight and on to the graveyard.  It is the final resting place of many of Baltimore’s most prominent 18th- and 19th-century residents, including several American Revolution and War of 1812 veterans.  But it is best known for hosting the grave of Boston-born Edgar Allan Poe, who died in Baltimore of unknown causes in 1849 at the age of 40. 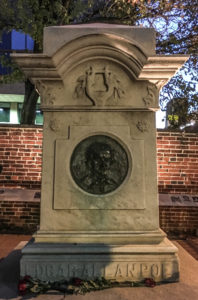 From Poe’s monument we headed under the church and into the creepy catacombs, strolling among the grave markers along the dirt pathways under the low ceiling. 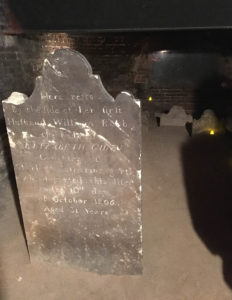 Then it was back into the dark and behind the church for the dramatic presentations.  We were most interested in Poe’s poem “The Raven” and his short stories “The Masque of the Red Death” and “The Tell-Tale Heart”.  I have always been drawn to “The Raven” for its repetitive rhythmic reflection of the poignant finality of loss.  I liked “The Masque of the Red Death” from my first reading, for its ironic consequences of assumption and presumption and judgmentalism.  It took me longer to appreciate “The Tell-Tale Heart”, its profound probing of guilt buried for me beneath the horror of the tale.  But the common thread I love most about all three works is their reflection of the power of the mind. 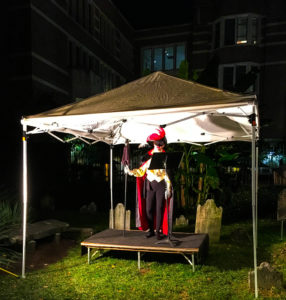 And Poe’s mind was no doubt powerful.  Like all great writers, he read voraciously.  Brilliant in a variety of genres, from narrative poem to gothic tale to critical essay, his influence beats on through modern literature, especially American literature.  He is reasonably credited as the father of detective fiction; the authors and audiences of characters from Sherlock Holmes to Jessica Fletcher are in his debt.  And his definition of a short story as “a brief prose narrative so constructed in plot, character, and setting as to produce a single emotional effect” remains the gold standard for the form.

But like his characters’, his mind amplified his torment and tragedy.  Like many brilliant people who know they’re brilliant, he didn’t play nicely with others, and didn’t think he should have to.  He was critical and condescending.  He resented editors.  This might have been smugly satisfying, but it didn’t pay the bills.  Poe struggled in poverty.  When his wife died at the age of 24, he couldn’t afford her coffin.  Devastated by her death, he descended into drunkenness, yet still produced some of his most haunting works, including “The Raven”, until he died less than three years later.  They now lie together under his monument in the Westminster Burying Ground.

We paused once more at their grave before passing through the iron gate and onto Fayette Street.  The air was cool but my red cape was warm.  We owe so much to those who have gone before us. 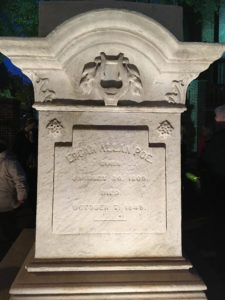 1 thought on “An Eerie Evening in Baltimore”