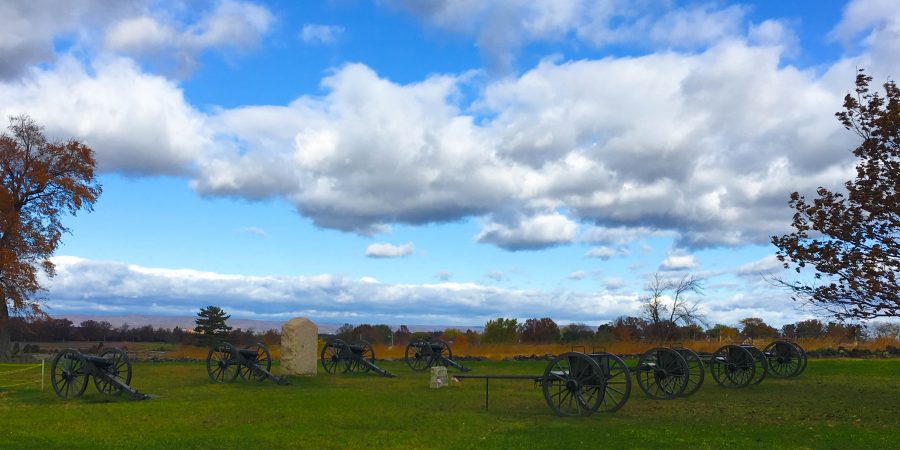 “A body would think the whole south had broke loose and are coming into Pa.” Rachel Cormony wrote in her diary on June 27, 1863.  “It makes me feel too badly to see so many men and cannon going through knowing that they have come to kill our men.”

Mrs. Cormony worried most about her own husband Samuel, a Second Lieutenant in the 16th Pennsylvania Cavalry.  The two had met when he lived in a boarding house that her family ran to finance her education at Otterbein University in Westerville, Ohio.  Now he served in the Union Army, and she cared for their baby Mary Cora in Chambersburg, a Pennsylvania borough through which Confederate General Robert E. Lee marched his army on the way to Gettysburg.  A week later she wrote, “I imagined that I could already see My Samuel falling.  I feel very uneasy about him.”

She had good reason for concern.  Two months earlier, the Confederacy had won the Battle of Chancellorsvile, a six-day fight and the main engagement of the Chancellorsville Campaign, which resulted in more than 30,000 casualties and losses.  Riding high on victory, Gen. Lee decided to invade the Union.  He hoped to give war-torn Virginia a break while damaging Union morale and diminishing popular and political support for the War in North.  And so he marched his Army into Pennsylvania.  In conflict with his orders, Confederate soldiers looted local stores.  “Some of our merchants will be almost if not entirely ruined,” Mrs. Cormony wrote on June 24.

Even more horrifically, they rounded up black Americans, possibly more than 1,000, and sent them South via a kind of reverse Underground Railroad, a network of slavers who deemed them “contraband” that should be “returned” to their “owners”.  Rachel Cormony writes:

All seemed quiet yet.  We almost came to the conclusion that the reb’s had left again leaving only a small guard who took things quite leasurely.  Soon however they became quite active.  Were hunting up the contrabands & driving them off by the droves.  O!  How it grated on our hearts to have to sit quietly & look at such brutal deeds–I saw no men among the contrabands–all women & children.  Some of the colored people who were raised here were taken along–I sat on the front step as they were driven by just like we would drive cattle.  Some laughed & seemed not to care–but nearly all hung their heads.  One woman was pleading wonderfully with her driver for her children–but all the sympathy she received from him was a rough ‘March along’–at which she would quicken her pace again.  It is a query what they want with those little babies–whole families were taken.

A lot was at stake when the Union and Confederate armies met on July 1.  Fierce fighting raged for two days.  The decisive engagement was Pickett’s Charge on July 3, named after Major General George Pickett, one of three Confederate generals leading the attack under Lieutenant General James Longstreet.  The Confederates first lobbed massive cannon fire into the Union defense.  Then approximately 12,000 Infantrymen began to march the better part of a mile across open fields.  They were decisively repulsed by Union cannon and rifle fire, with nearly 9,000 casualties and losses, in contrast with the Union’s 1,500.

I visited the site of Pickett’s Charge at Gettysburg National Military Park on a peaceful breezy day in early November. Trees just past peak proclaimed the poignancy of inevitable change, and loss, and sorrow. 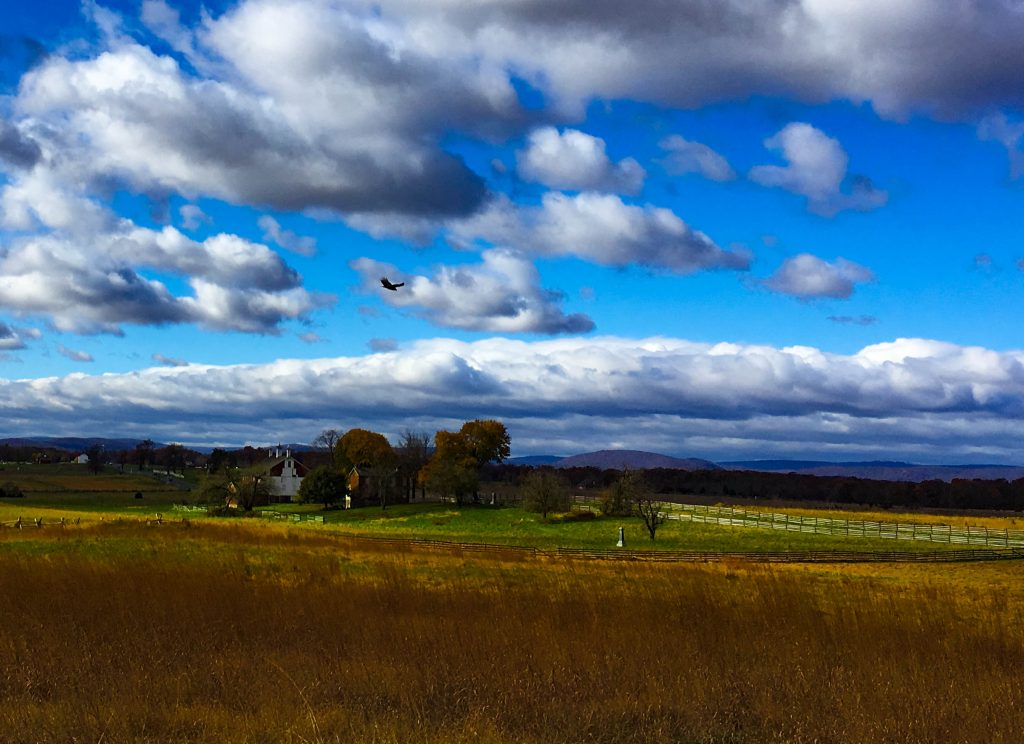 A lone black hawk soared and swooped above, oblivious to the significance below.

The spot is called the High Water Mark, the furthest point reached by the Confederate Army and the turning point of the Civil War.  In the early morning hours of July 4, Gen. Lee’s demoralized Army retreated back to Virginia.  The Battle of Gettysburg was over; the Confederacy would never recover.

Samuel Cormany arrived home on July 6.  His wife wrote, “Mr. Cormany just rode up.  I was so very glad to see him that I scarcely knew how to act.  He was very dirty and sweaty so he took a bath and changed clothes.”  He soon returned to a war that continued nearly two more years.

From the High Water Mark, I walked to the Gettysburg National Cemetery, where rest more than 6,000 casualties and veterans from the Civil and later wars. 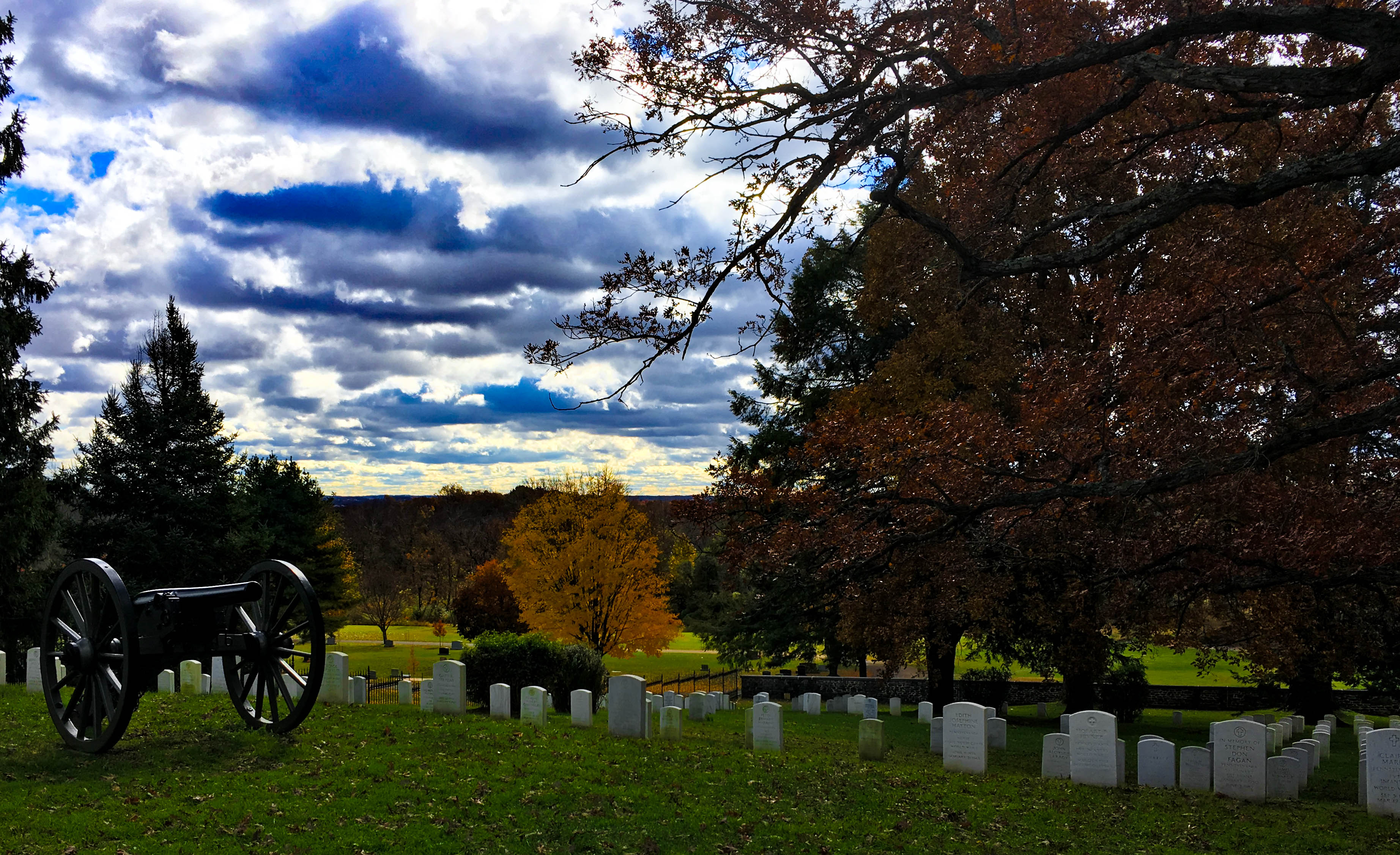 It was dedicated 14 score and 15 years ago this November 19, with President Abraham Lincoln’s masterpiece Address, concluding:

[I]n a larger sense, we can not dedicate–we can not consecrate–we can not hallow–this ground.  The brave men, living and dead, who struggled here, have consecrated it, far above our poor power to add or detract.  The world will little note, nor long remember what we say here, but it can never forget what they did here.  It is for us the living, rather, to be dedicated here to the unfinished work which they who fought here have thus far so nobly advanced.  It is rather for us to be here dedicated to the great task remaining before us–that from these honored dead we take increased devotion to that cause for which they gave the last full measure of devotion–that we here highly resolve that these dead shall not have died in vain–that this nation, under God, shall have a new birth of freedom–and that government of the people, by the people, for the people, shall not perish from the earth. The Battle of Gettysburg totalled more than 50,000 casualties and losses.  It would remain the bloodiest battle in American history until D-Day, and one of the most consequential.  It set the Union squarely on the path to victory.  The Civil War ended race-based chattel slavery in America.  Ironically, it also consolidated the power of the national government, spurring its transformation from the Founders’ federalist vision securing life, liberty, and the pursuit of happiness to a powerful behemoth, imposing an invasive income tax on an increasingly dependent population, hosting a Byzantine bureaucracy, and turning the States into its own administrative vassals.

Samuel Cormany’s regiment was at Appomattox Court House when Gen. Lee surrendered in April 1865.  His family finally reunited on August 27.  They moved from Pennsylvania to Missouri and then Kansas.  In 1878, they settled in Michigan, where he began small businesses to finance their daughter’s education.  In 1880, Mary Cora went off to Otterbein University. What to Know Before You Go to Gettysburg National Military Park

Gettysburg National Military Park is located at 1195 Baltimore Pike.  Entrance and parking are free.  The Park opens daily at 6 a.m. and closes at 7 p.m. during November-March and at 10 p.m. during April-October.  The Visitor Center is open 9-5 during November-March and 8-6 during April-October; it is closed on Thanksgiving, Christmas, and New Years’s Day and closes at 2 p.m. on Christmas Eve.

How to Get to Gettysburg

The closest airport is Harrisburg International, about 35 miles north of Gettysburg.  From the mid-Atlantic region, it is a very pleasant drive past small Craftsman homes behind big shady trees.

What to Wear at Gettysburg

Comfortable shoes and socks.  The terrain at Gettysburg is flat and open and easy to walk.  I was fine in my Superga sneakers.

Layers.  Northeast weather is hot in the summer, cold in the winter, and always unpredictable.  Dress for the expected weather and your preferences, and pack a lightweight windbreaker.

What to Bring to Gettysburg

Snacks, if you plan to make a day of it.

Camera.  The scenery at Gettysburg is beautiful.  I took the photos in this post with my iPhone.  But Gettysburg is one park where my DSLR and even tripod would have been manageable, thanks to the flat terrain and small crowds. 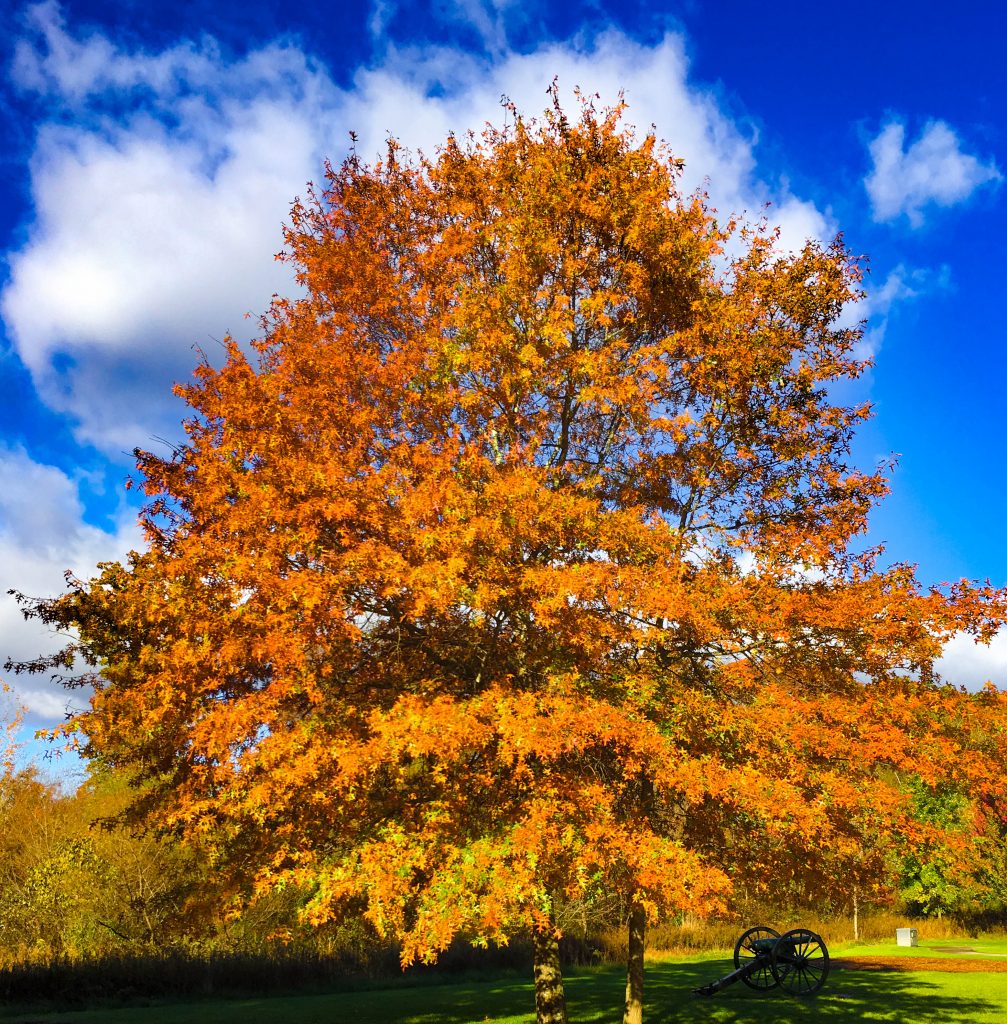 What to do at Gettysburg

Start at the Visitor Center.  Here you can pick up maps and get your bearings.  For basic context, there is a “Film, Cyclorama, and Museum Experience” for a standard ticket price of $15 per adult and $10 per child over age five.  The film is “A New Birth of Freedom”, which explains the significance of the Battle of Gettysburg in American history.  The Gettysburg Cyclorama is a 360-degree oil-on-canvas depiction of Pickett’s Charge; it weighs 12.5 tons and spans 377 x 42 feet.  The Gettysburg Museum of the American Civil War features 12 galleries of displays covering the Civil War and its causes.

Hike.  If you like history and scenery with your fitness activities, Gettysburg is a wonderful park to hike, with a mix of paved paths, defined trails, and open fields.

Follow the auto tour.  Gettysburg National Military Park offers a suggested auto tour with parking spots available near significant spots like the High Water Mark.  This would be a good choice if you want to explore all or most of the battlefield on your own.

Tour with a Licensed Battlefield Guide.  There are two options here.  A Gettysburg guide will drive your vehicle through the Park for $75-150 per car, or you can take a public guided tour in a bus for $35 per adult and $21 per child over age five.  Licensed Battlefield Guides are knowledgeable historians who train for years and pass multiple tests.  If you want in-depth information, this is a good option for you. Where to Eat at Gettysburg

To learn more about the Civil War, the New York Times suggests this reading list. 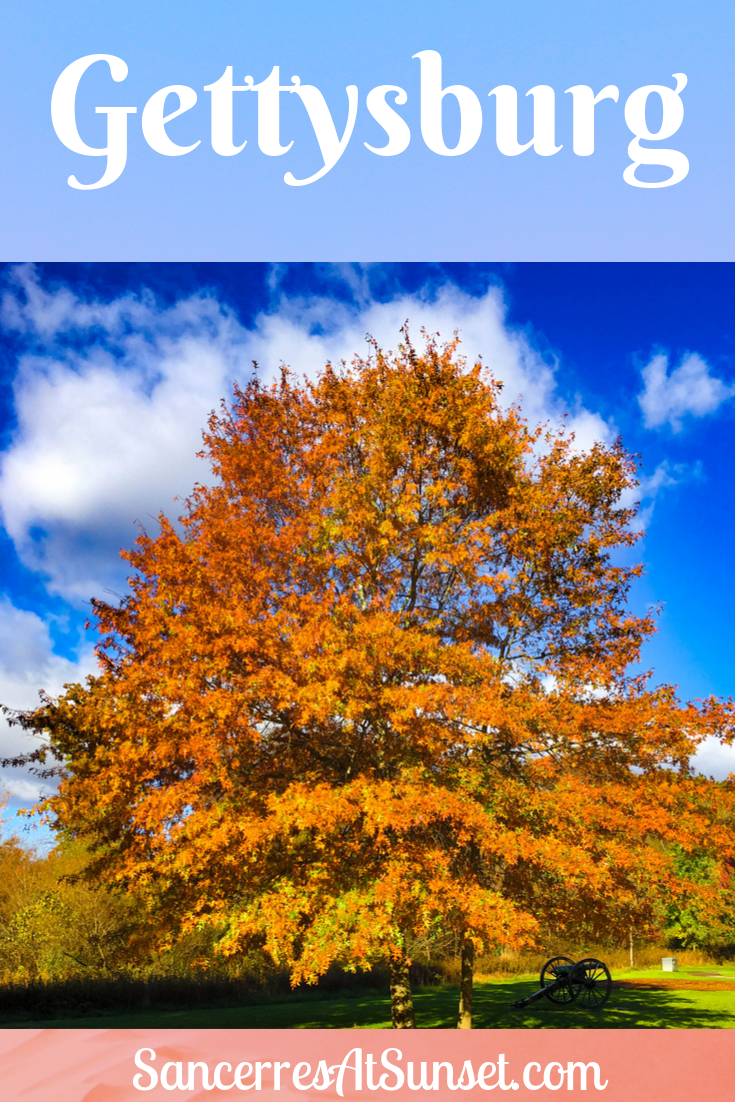 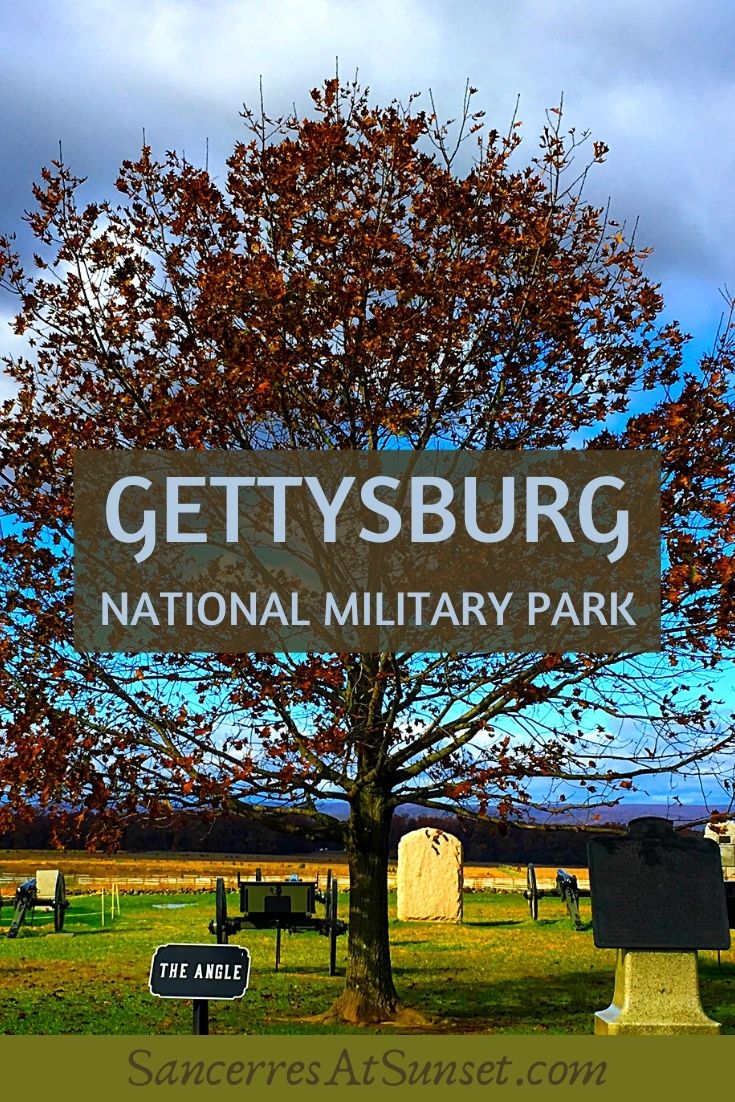 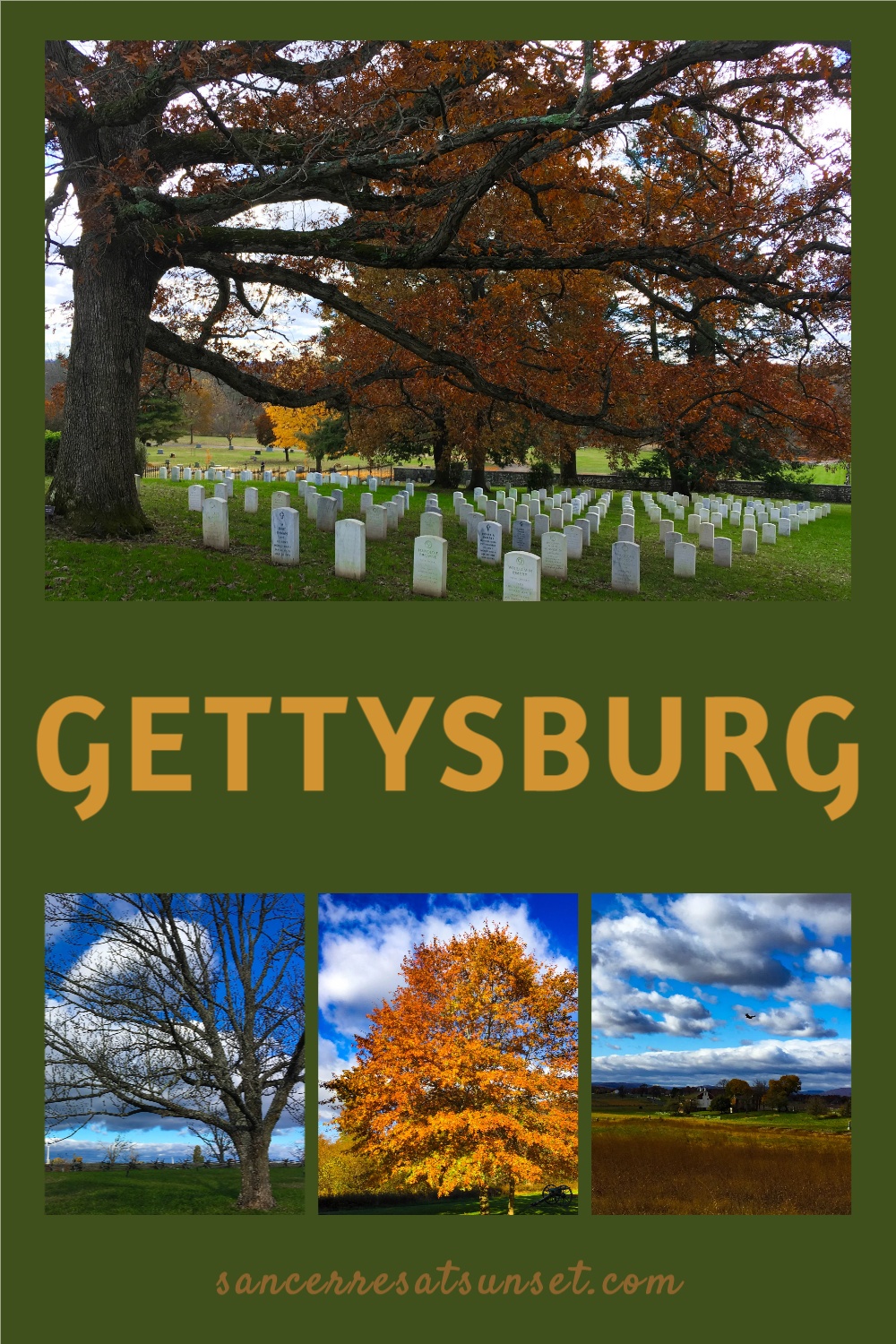 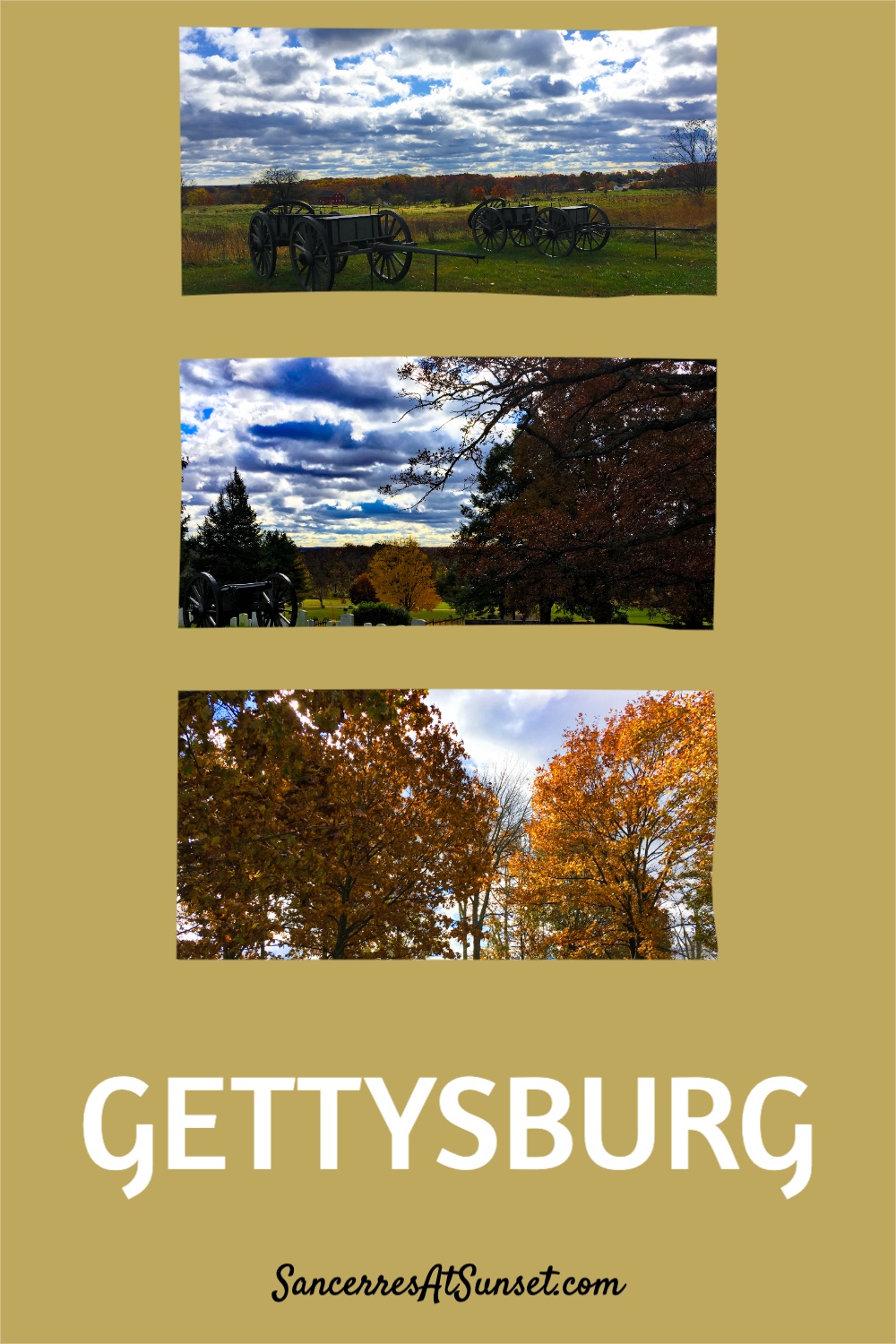