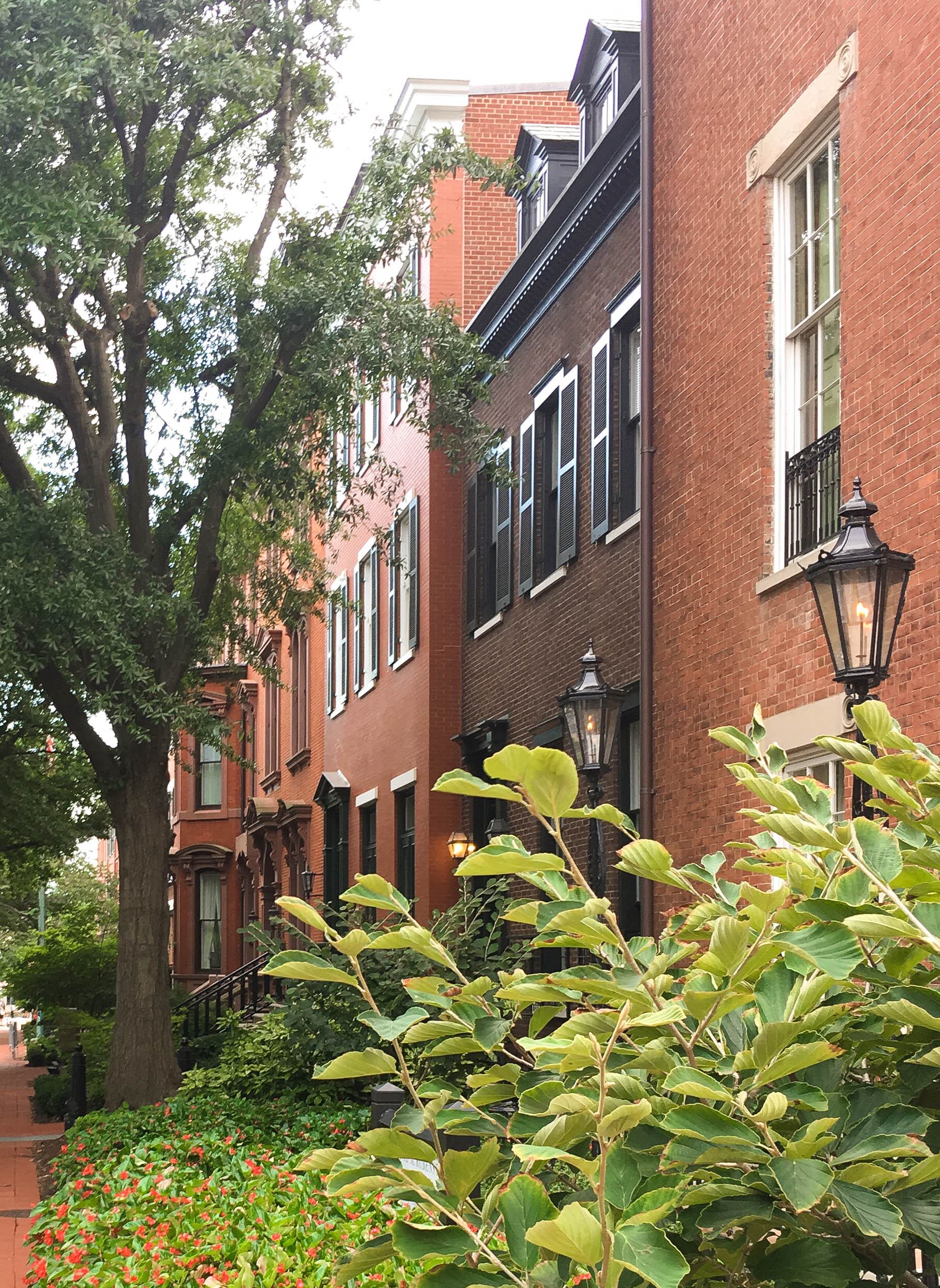 Lafayette Square is a seven-acre public park directly across Pennsylvania Avenue from the White House.  It is one of the most meaningful areas in American history, where citizens have lived out the freedoms protected by the First Amendment amid statues of the men who won our independence from Great Britain.  The Park and its surrounding area was designated a National Historic Landmark District in 1970. 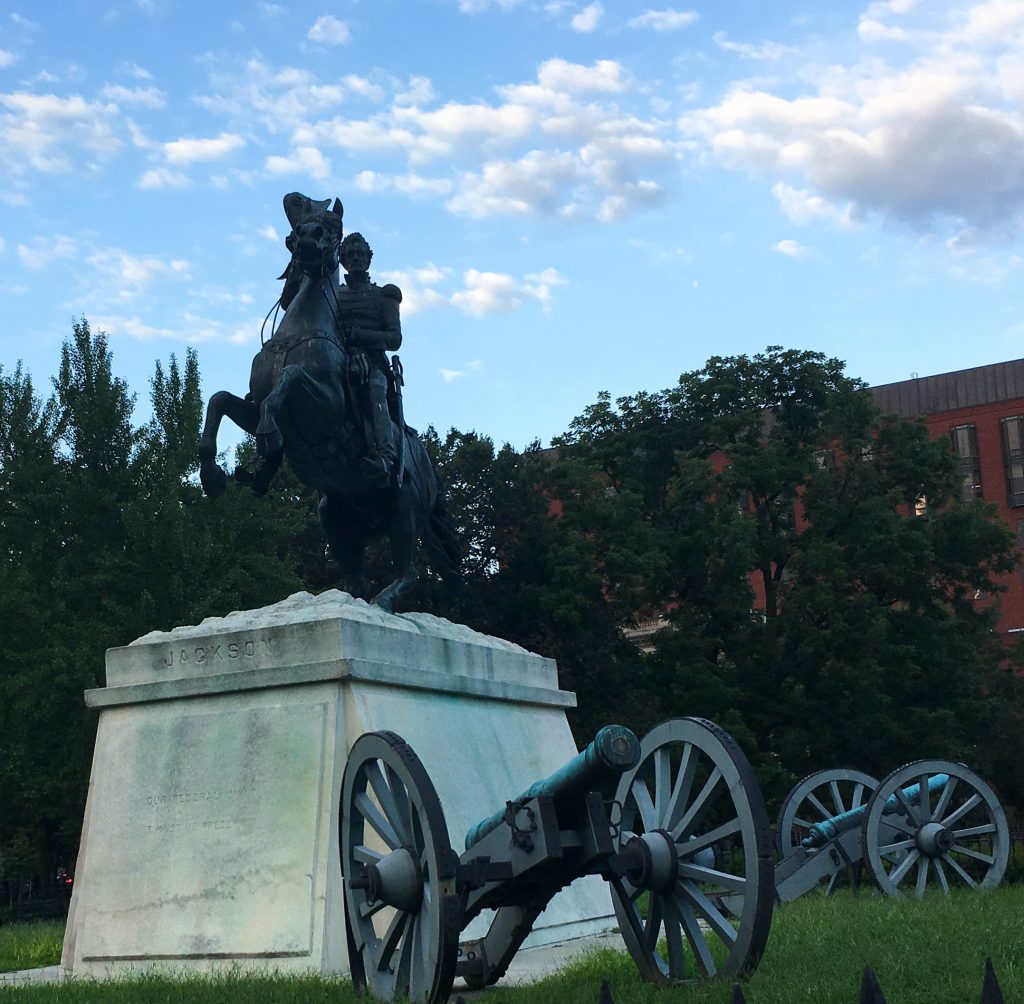 The Park’s central statue depicts (no, not the Marquis de Lafayette) President Andrew Jackson.  Standing at its corners are statues of four European generals from the Revolutionary War:

The Square was renamed in honor of the Marquis de Lafayette in 1824, when he returned from France for a tour of all 24 states.  It was a good choice.  Not all Lafayette Square’s history is glorious.  It is likely that slaves were bought and sold there.  But the Marquis de Lafayette is one of the most significant early abolitionists on three continents.  He urged his friends George Washington, Thomas Jefferson, and others to live out opposition to slavery.  After the War, he successfully petitioned the Virginia legislature to emancipate James Armistead, a slave who had served as a double agent during the War, spying on Generals Charles Cornwallis and Benedict Arnold, supplying information that contributed to the Continental Army’s victory at Yorktown.  Upon his emancipation, the freed slave renamed himself James Armistead Lafayette.  It is believed that the Marquis may have also supplied money that enabled Armistead-Lafayette to buy the freedom of his wife, children, and other relatives over the years.

After returning to France in 1785, Lafayette pursued a practical plan to eliminate slavery.  In 1786, he purchased two sugar plantations in the South American colony of Cayenne (French Guiana) with approximately 70 slaves.  His idea was to model gradual manumission.  He converted the plantations to spice production, which required less demanding labor than sugar.  He paid the workers wages, provided schooling for them, and granted them leisure time with their families.  He forbade selling slaves as well as the use of the whip for punishing them.  He thought that these reforms would prepare the workers for freedom and show the world how emancipation could work.  Meanwhile, representing the nobility in the Estates General, Lafayette advocated legally abolishing slavery.  Unfortunately, the French Revolution got in the way.  Before he could implement his plan for gradual manumission, Lafayette was thrown in prison in Austria.  His plantations were confiscated under Robespierre, and the slaves were sold.  France did abolish slavery in 1794, but the institution was reinstated by Napoleon in 1802.  Still, France ultimately abolished slavery in 1848, fifteen years before America did.

Significant buildings along Lafayette Square include: 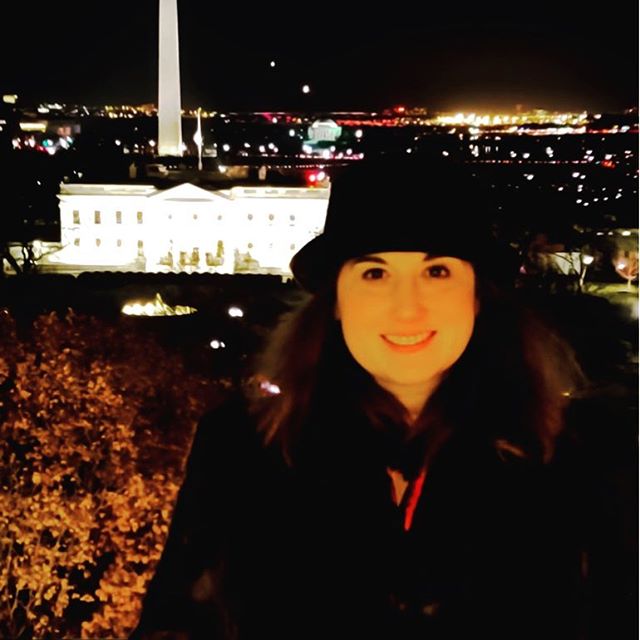 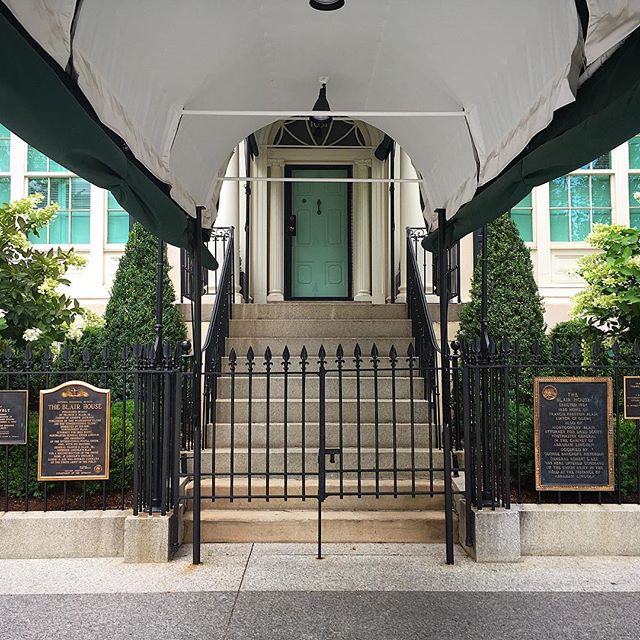 Beginning in the 1950s, the architectural character of the district came under threat from a movement to raze some of the historic buildings and erect modern government offices.  In 1962, First Lady Jacqueline Kennedy ignited a successful effort to preserve the buildings and their sense of heritage.  In one letter, she stressed the importance of “preserving our nation’s past”, including “the 19th Century feeling of Lafayette Square”, and noted her “panic at the thought” of such historic buildings “being ripped down and horrible things being put up in their place”.  She not only saved the character of Lafayette Square but also raised public support for historic preservation in general. 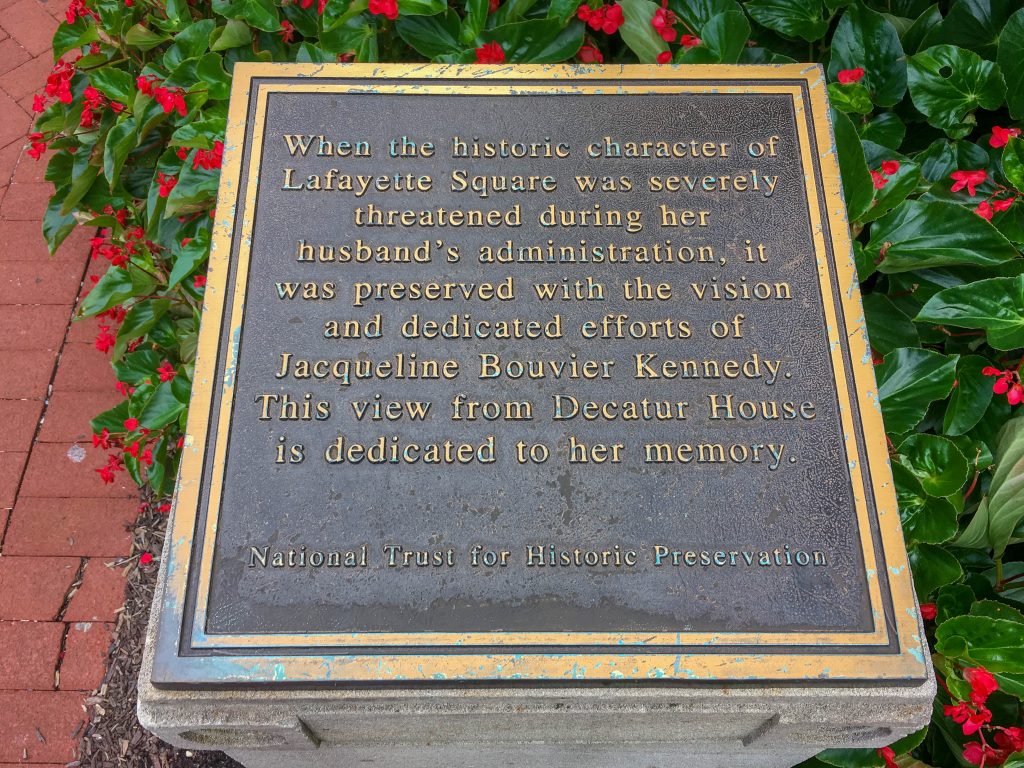 But Lafayette Square is important to America’s heritage in ways far beyond architecture.  Situated across from the White House, it’s an ideal location for political protest.  The earliest demonstrators were suffragettes, demanding that President Woodrow Wilson support votes for women.  They were beaten by passers-by.  Sometimes the police watched these attacks.  Sometimes they arrested the protesters and locked them in jails, where they were given dirty bedding and insect-infested food, and sometimes beaten to the point of torture.  The treatment of the women and the violations of the First Amendment helped move public sympathy toward their cause.

And they started a trend that has lasted for decades.  Over the years, groups on every side of virtually every issue have demonstrated in Lafayette Square.  In college, I attended rallies there in support of President Ronald Reagan‘s successful efforts to defeat the Soviet Union.  I was there on November 3, 1983, chanting “Run, Ronnie, Run!” with my friends, and we were thrilled to catch a glimpse of the President and Mrs. Reagan waving from behind a White House window.  Hours later, President Reagan announced his intention to run for re-election.  (It was a real nail-biter, and I’m sure our rally was the tipping point.)

Lafayette Square is the heart and soul of America, the heritage of our early Republic, and the home field of the First Amendment. 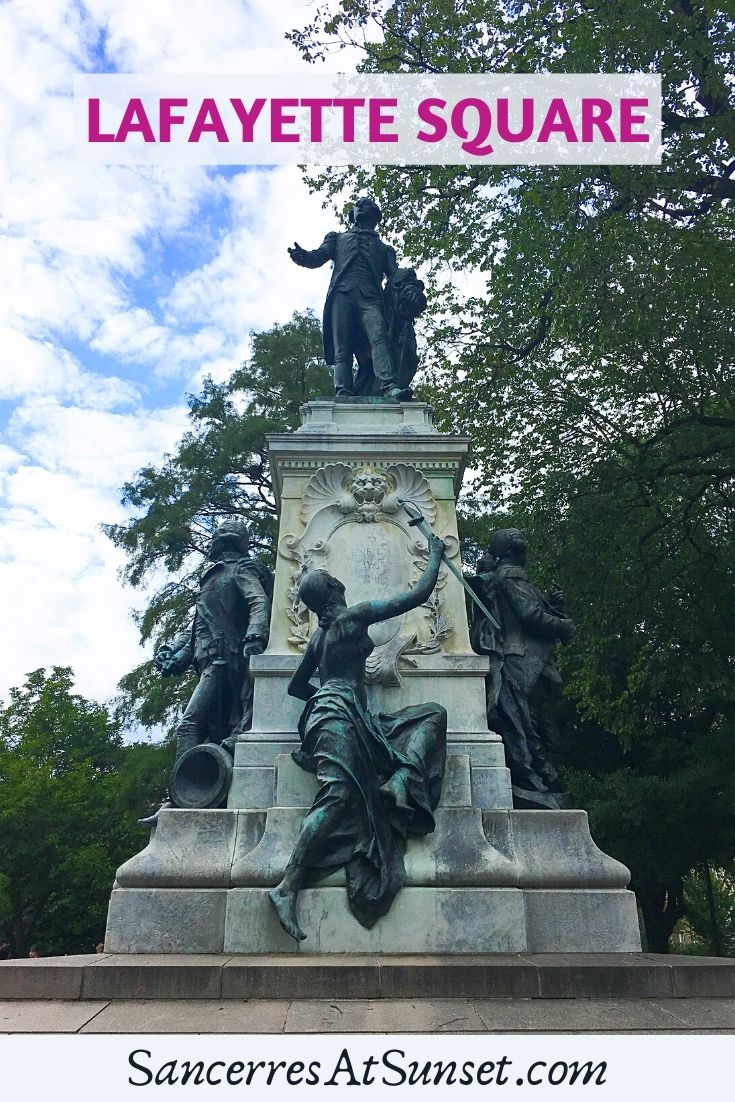 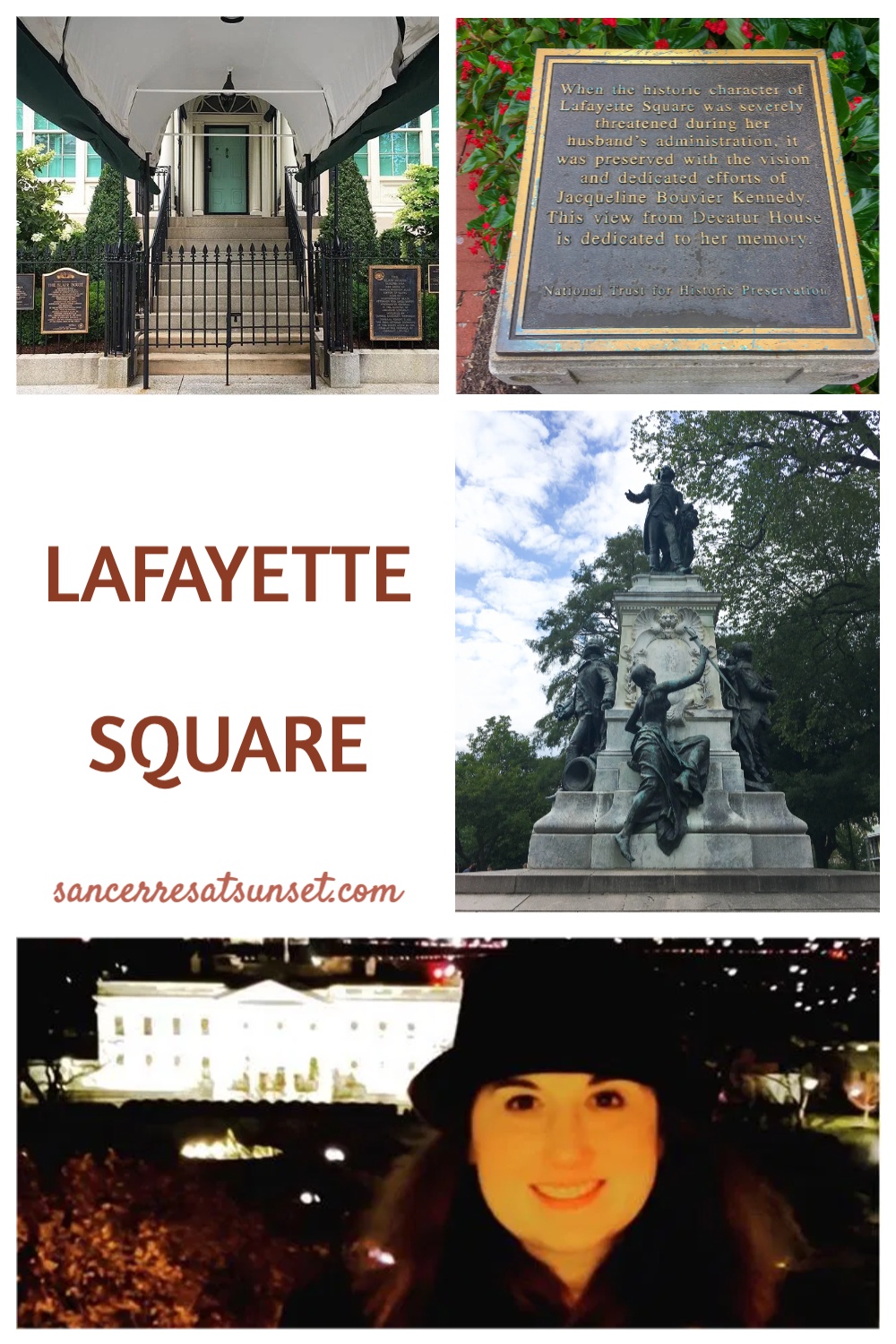 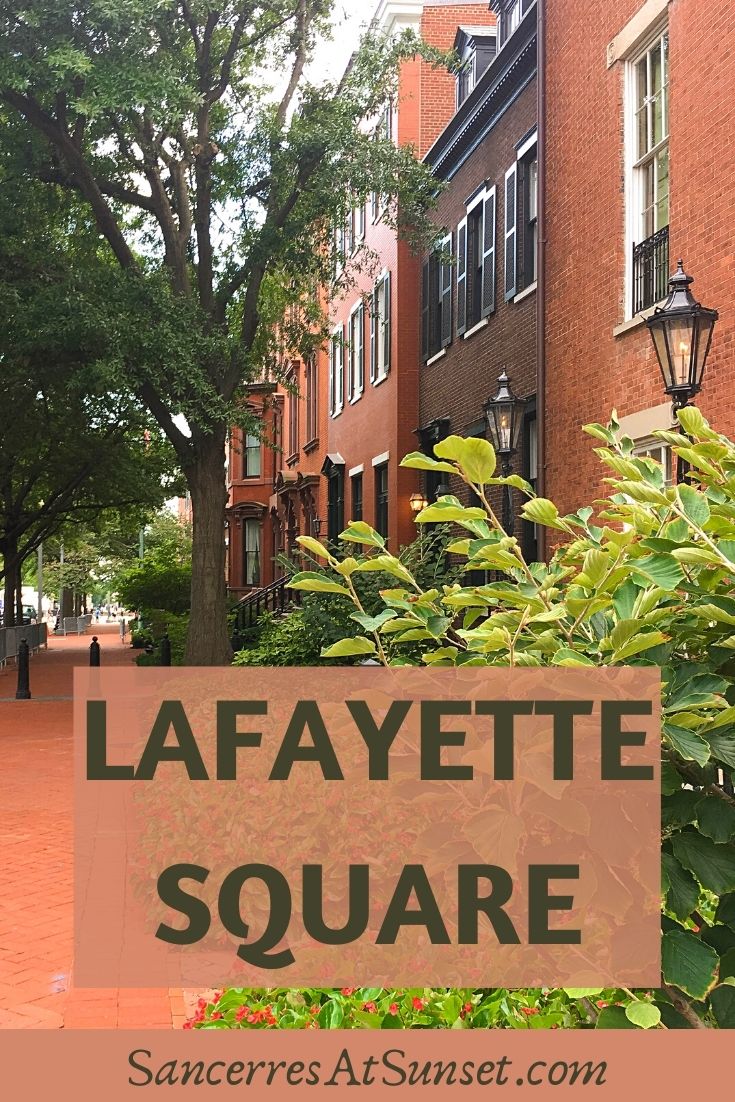 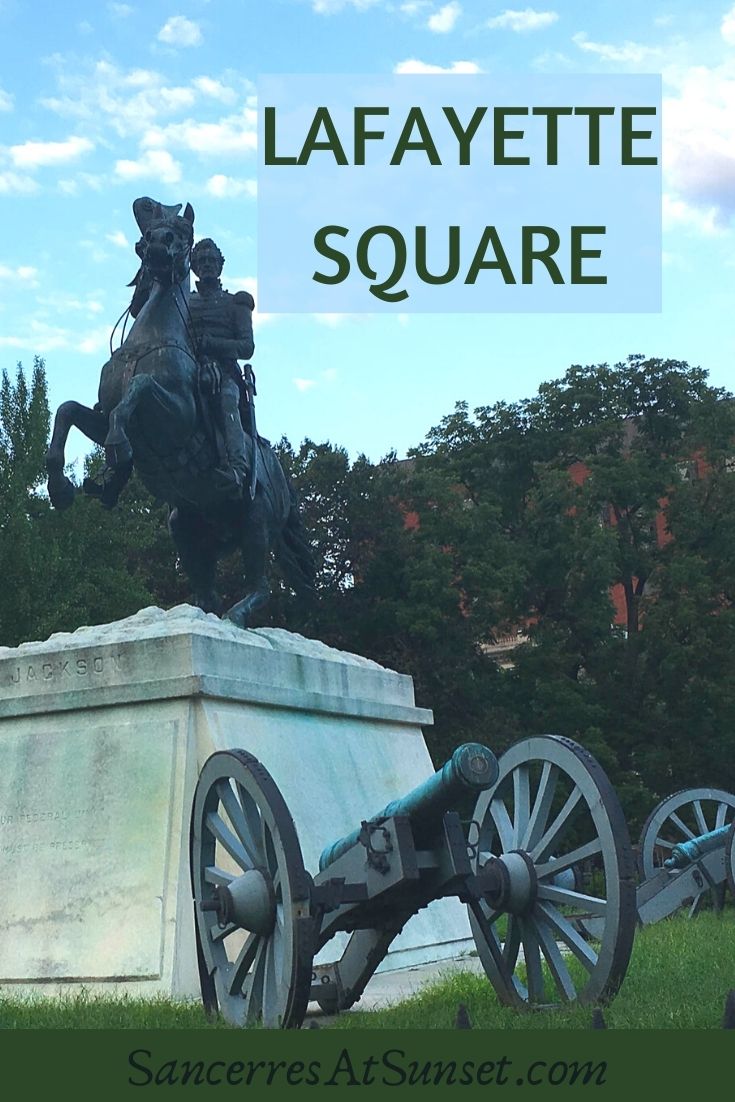