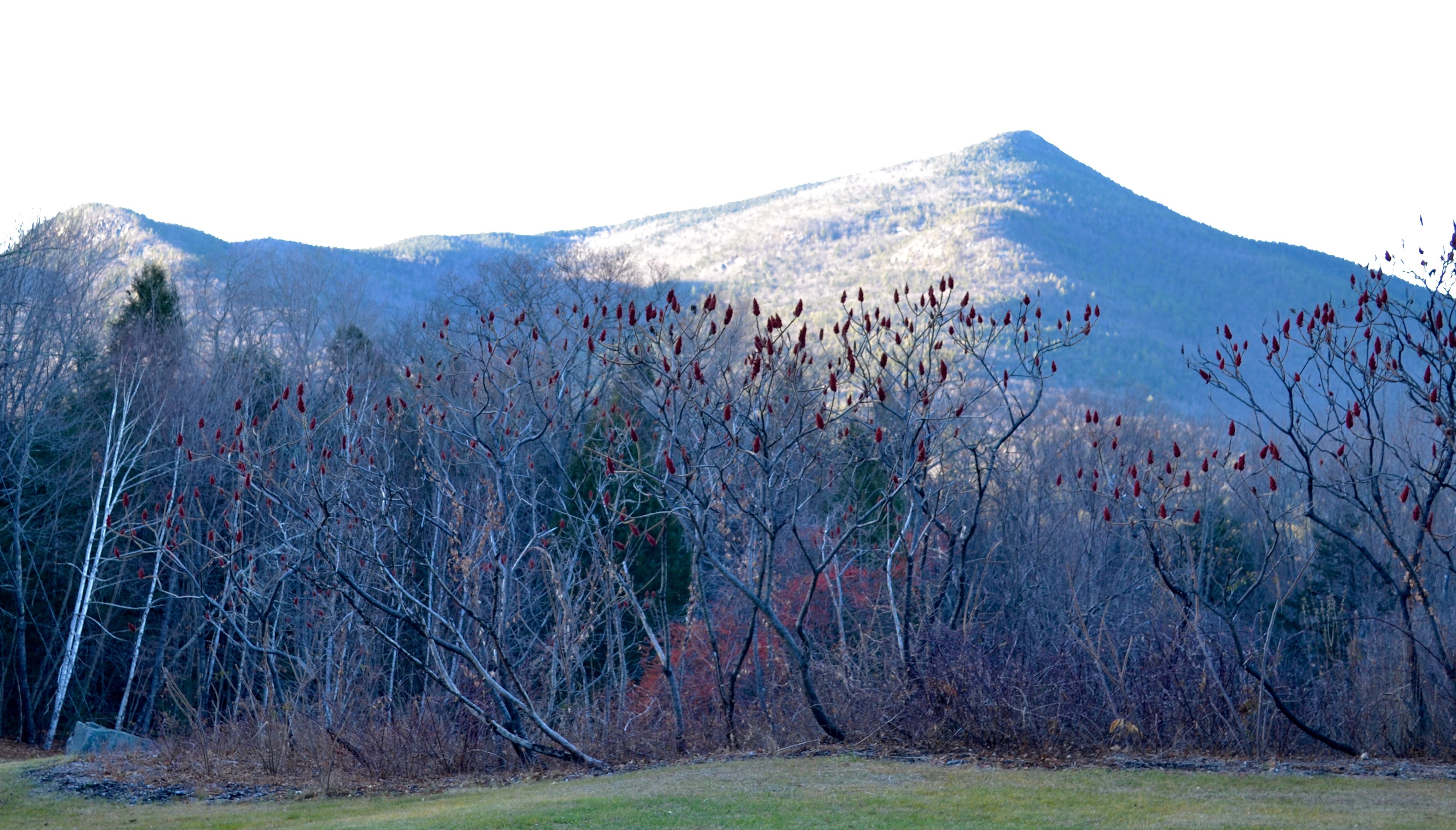 The bare trees stood a spooky blackish brown against the grey sky, their finger-y branches reaching out as if to grab someone.  The evergreens enjoyed their once-yearly time to shine as the brightest family in the neighborhood.  The mountains appeared to step forward, their white, grey, blue, and occasional purple unobscured by blooming flowers or blazing foliage.

New England is spectacular in autumn, when changing leaves of orange, red, and gold kaleidoscope into a new show every day.  And it’s special in winter, when freshly fallen snow coats roads and roofs, lawns and leaves, with glistening white.

But in between is stick season, when if you look up and out from the bustle of Christmas prep, you’ll see the spare unvarnished harmony that buttresses the year’s changing glories.  This is real beauty—beauty without make-up.

I checked in to the remote Snowvillage Inn, in Snowville, New Hampshire, and received one of four small sleeping rooms in the Chimney House, an isolated grey wooden building a short walk from the main Inn.  I would be the only Chimney House guest that night, so I had the large sitting room, with its piles of dog-eared books and dated magazines, all to myself.

For dinner, I walked over to the main Inn.  It was a busy night in the restaurant, with large parties celebrating Christmas two weeks early.  I chose to sit at the small bar, where a middle-aged man of few words sat at one end, his back turned for most of the evening.  Throughout the weekend, every time I came for a meal, he would be sitting on the same stool, like Norm from Cheers, though I doubt anyone ever shouts his name when he comes in.

Others were friendlier.  Between us sat a woman with her son of about eight or nine, watching a recast Patriots game on a smartphone.  Though no one complained, she volunteered that it was legal for him to sit there because “it’s an inn”.  Not really, noted Kevin, the Inn’s owner/bartender/jack-of-all-trades.  But no worries.  “Do you think the police are going to come out here for a kid at the bar?” he quipped.  “You can’t get them to come out for a murder.”  I didn’t want to ask how he knew that.

A roar of laughter came from the adjacent dining room, as I swallowed savory seafood stew.  “They’re on their second drink; that’s when people start to get loud,” Kevin mused.  “I always know what point we are in the evening.”  He was cheerful and good-humored, though the salt-and-pepper hair and lined face that topped his thin frame declare the long days of a small innkeeper.

After waking up in the queen-size bed in my sparse room and getting ready in the small en suite bathroom, I turned off the gas fireplace and headed across the grounds to the main Inn for breakfast.  The morning sky was still cloudy, but the sun was starting to peek through and glistened golden green off the treetops in the distance.  Behind them stood Mount Washington, alternating jagged swaths of pale grey and dusky blue against the white clouds.

I passed by not-Norm at the bar and took a table by the porch.  Through the large windows I could still see the White Mountains.  Below, on the porch, stacked firewood flanked primary-color plastic storage bins.  After a satisfying breakfast sandwich cooked by Kevin, I hiked up the small hill to the parking lot and hopped into Mercey B, my silver sedan and companion for the trip.

Our mission was the 19th Annual Inn-to-Inn Cookie and Candy Tour, presented by the consortium of Country Inns of the White Mountains, a self-guided trip to eleven bed-and-breakfasts, decorated for Christmas and offering sweet treats at every stop, luring hundreds from all over the Northeast.

At the Inn at Crystal Lake, in Eaton Center, the proprietor displayed his grandmother’s hand-written, spatter-stained recipes along with oatmeal and molasses cookies.

The Eastman Inn in North Conway served hot chocolate along with Chai Eggnog and Eggnog Thumbprint cookies.  Inside the red brick fireplace, St. Nicholas dolls hovered like angels above a Dickensian village scene.

Along with New Hampshire Maple Walnut Bars and Winterberry Meltaways, the Darby Field Inn in Albany offered shots of vodka from the nearby White Mountain Distillery. 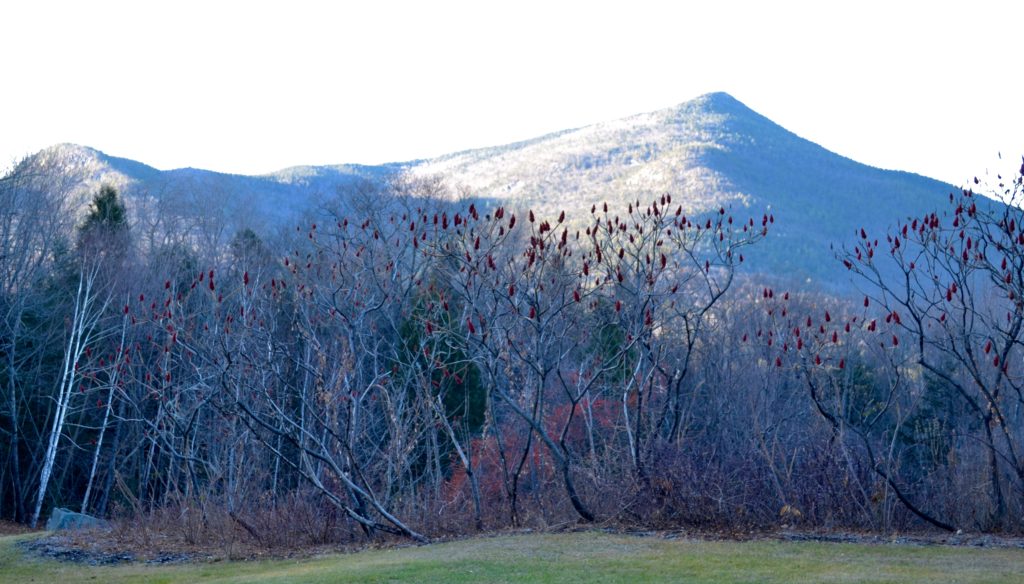 But it was the view outside that took my breath away, the red staghorn sumac cones reaching up from bare bushes against the velvety white mountain.

The 1785 Inn in North Conway gave out Chocolate Crinkle and Peanut Blossom cookies. 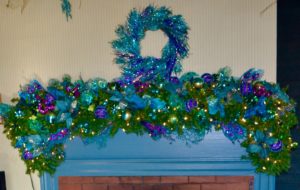 Two Cookie-Touring ladies glowed about the beauty of the Christmas decorations, whose green, purple, and teal reflected the colors of a nearby spot offering the best view I had of the White Mountains, where full evergreens and bare birches gave way to the mountains ranging from brownish forest to grey-lavender to deep blue.

The open scenery outside was a clear break from inside the bed-and-breakfasts, crowded not only with Cookie Tourists but also with Christmas decorations crammed amid the year-round clutter.  Sitting rooms overflowed with books, magazines, games, and knickknacks strewn across shelves, tables, and even pianos.  Most of the inns left one guest room open for visitors to view their patchwork quilts and patterned wallpaper.  I peeked into one small bathroom, with its detached white tub.  The white shower curtains were parted, and I could glimpse boxed Christmas balls stacked inside.  Having grown up in Massachusetts, I know how much clutter that frugal New Englanders assume as baseline.  My mother saved stacks of the plastic scoops that came with powdered detergent, the left-over tissue paper from my parents’ wedding invitations, and tinsel, which our family spent every New Year’s Day pulling off the Christmas tree and restoring neatly to its original worn-out packages.  Her mother saved stacks of hand-washed cardboard trays from microwavable meals, a drawer full of neatly smoothed plastic lobster bibs, and the blank, gummed squares that came at the bottom of postage-stamp sheets, folded along the perforations and stored in small boxes.  Their homes echoed with the housewives’ mantra:  “Use it up; wear it out; make it do, or do without.”  In other words, I’ve seen a lot of clutter.  But I had never before seen Christmas ornaments stored in a bathtub, in a display room.

Back at my base camp of Snowvillage Inn, I was happy to indulge in my favorite treat of the day, the chewy Dark Chocolate Mint Brownie, offered alongside also delicious Raspberry Linzer Window Cookies, in the dining room overlooking the green, grey, blue, purple White Mountains.

The restaurant was quieter when I passed not-Norm and took a barstool for a dinner and sugar detox with one of my favorite treats, a cheese board.  The most memorable moment came when a waitress told Kevin that a large party complained their French Fries were “too short”.  Just when I was thinking that a bathtub full of Christmas balls would be the strangest thing I encountered all day.

In the morning, I passed not-Norm for the final time and took the same window table with its views of the White Mountains, stacked firewood, and plastic bins for a quick breakfast of an oven-hot cranberry-orange muffin and bacon and eggs, prepared by a cheery Kevin.  I’m not sure when he sleeps or how he stays so pleasant.

As Mercey B and I headed home, we rounded the curve of a large lake.  The sun was bright, and glistened in the water’s reflection of the neat row of evergreens punctuated by a lone white steepled church.

1 thought on “Weekend in the White Mountains”