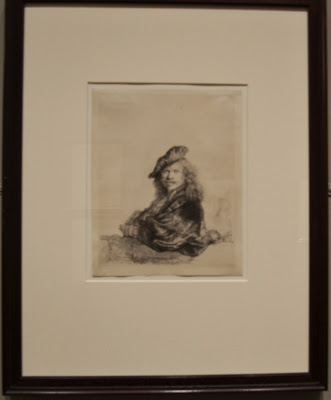 The face in the etching stares directly at the viewer. The light reflected on the subject’s full cheeks gives him an almost childlike look. But the sad eyes, and the lines above them, make him appear older than he is.

Rembrandt Leaning on a Stone Wall, a self-portrait etched when the artist was in his thirties, brings together the lightness and darkness, the hopefulness and sorrow, that seem to typify much of Dutch art, and much of the human condition that it reflects.

Nature scenes too reflect these dualities. Landscape with a Cottage and a Large Tree, for example, is a charming etching of a peaceful scene. 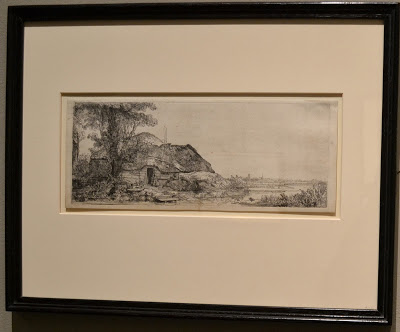 The cottage, slightly shielded by the lush tree, looks inviting, yet it almost seems to slouch, as though it too feels the burdens of life in the 17th century, or perhaps any era.

No doubt Rembrandt was aware of the harshness of daily life for most people, and perhaps the artist sensed the hardship that art and fate would bring to him. At the time when he produced these etchings, the 1630s and ’40s, he enjoyed great renown. But by the late ’50s, his artistic style had lost popularity, and his portrait commissions declined. His wife died shortly after the birth of the couple’s only surviving child, their son Titus. A woman named Geertje Dircks moved in with the van Rijns, probably as a wet-nurse for the boy, but she apparently became his father’s mistress. She then took ill, and and another woman, Hendrickje Stoffels, joined the household to care for her, and she too became Rembrandt’s mistress, and faced discipline by the Dutch Reformed Church after she became pregnant. Because he was not a member of the church, Rembrandt escaped formal discipline, but the scandal further eroded his popularity in Calvinist Holland. Deeply in debt, he lost his large fashionable home and his extensive art collection. It is a sad but not uncommon fate for an artist.

But his oeuvre lives on, and 45 of his nearly 300 etchings are on display at Boston’s Museum of Fine Arts through February 17.