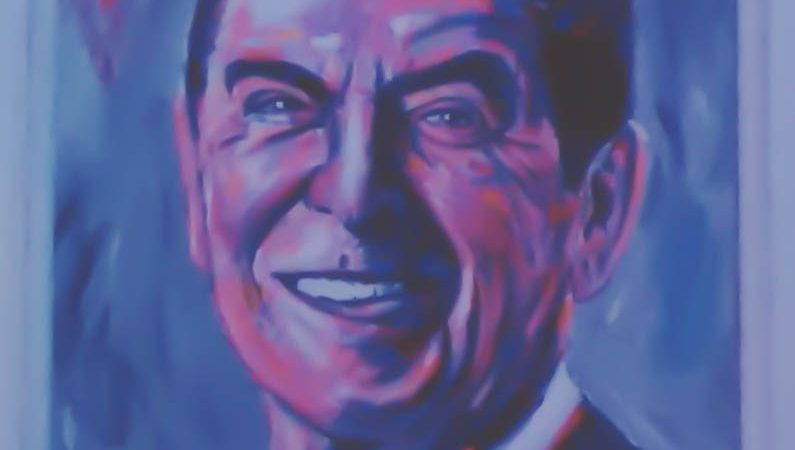 Thank you very much. Mr. President, Mrs. Ford, Mr. Vice President, Mr. Vice President to be, the distinguished guests here, and you, ladies and gentlemen: I am going to say fellow Republicans here, but also those who are watching from a distance, all of those millions of Democrats and Independents who I know are looking for a cause around which to rally and which I believe we can give them.Mr. President, before you arrived tonight, these wonderful people here, when we came in, gave Nancy and myself a welcome. That, plus this, and plus your kindness and generosity in honoring us by bringing us down here will give us a memory that will live in our hearts forever.Watching on television these last few nights, and I have seen you also with the warmth that you greeted Nancy, and you also filled my heart with joy when you did that.May I just say some words. There are cynics who say that a party platform is something that no one bothers to read and it doesn’t very often amount to much. Whether it is different this time than it has ever been before, I believe the Republican Party has a platform that is a banner of bold, unmistakable colors, with no pastel shades.We have just heard a call to arms based on that platform, and a call to us to really be successful in communicating and reveal to the American people the difference between this platform and the platform of the opposing party, which is nothing but a revamp and a reissue and a running of a late, late show of the thing that we have been hearing from them for the last 40 years.If I could just take a moment; I had an assignment the other day. Someone asked me to write a letter for a time capsule that is going to be opened in Los Angeles a hundred years from now, on our Tricentennial.It sounded like an easy assignment. They suggested I write something about the problems and the issues today. I set out to do so, riding down the coast in an automobile, looking at the blue Pacific out on one side and the Santa Ynez Mountains on the other, and I couldn’t help but wonder if it was going to be that beautiful a hundred years from now as it was on that summer day.Then, as I tried to write — let your own minds turn to that task. You are going to write for people a hundred years from now, who know all about us. We know nothing about them. We don’t know what kind of a world they will be living in.And suddenly I thought to myself, if I write of the problems, they will be the domestic problems the President spoke of here tonight; the challenges confronting us, the erosion of freedom that has taken place under Democratic rule in this country, the invasion of private rights, the controls and restrictions on the vitality of the great free economy that we enjoy. These are our challenges that we must meet.And then again, there is that challenge of which he spoke, that we live in a world in which the great powers have poised and aimed at each other horrible missiles of destruction, nuclear weapons that can in a matter of minutes arrive at each other’s country and destroy, virtually, the civilized world we live in.And suddenly it dawned on me, those who would read this letter a hundred years from now will know whether those missiles were fired. They will know whether we met our challenge. Whether they have the freedoms that we have known up until now will depend on what we do here.Will they look back with appreciation and say, “Thank God for those people in 1976 who headed off that loss of freedom, who kept us now 100 years later free, who kept our world from nuclear destruction”?And if we failed, they probably won’t get to read the letter at all because it spoke of individual freedom, and they won’t be allowed to talk of that or read of it.This is our challenge; and this is why here in this hall tonight, better than we have ever done before, we have got to quit talking to each other and about each other and go out and communicate to the world that we may be fewer in numbers than we have ever been, but we carry the message they are waiting for.We must go forth from here united, determined that what a great general said a few years ago is true: There is no substitute for victory, Mr. President.

The convention audience erupted in thunderous cheers, as “California, Here I Come” played.

The next morning, Gov. Reagan met with the California delegates. “The cause goes on,” he reminded them. “It’s just one battle in a long war and it will go on as long as we all live.” He finished by quoting St. Barton’s Ode:

I will lay me down and bleed a while
Though I am wounded, I am not slain
I shall rise and fight again.

Next he met with his disappointed campaign volunteers. “Don’t get cynical,” he cautioned them. “[L]ook at yourselves and what you were willing to do, and recognize that there are millions and millions of Americans out there that want what you want, that want it to be as we do, who want it to be a shining city on a hill.”

And then he headed back to the ranch, passing, on the way to the airport, a hand-painted sign reading: “GOODBYE REPUBLICANS. YOU PICKED THE WRONG MAN.”

But, Nancy Reagan later wrote in her autobiography, “Ronnie has always believed what his mother taught him–that whatever happens, happens for a purpose. As he saw it, he lost the nomination in 1976 because God had other plans for him.

“Four years later, we would learn what they were.”