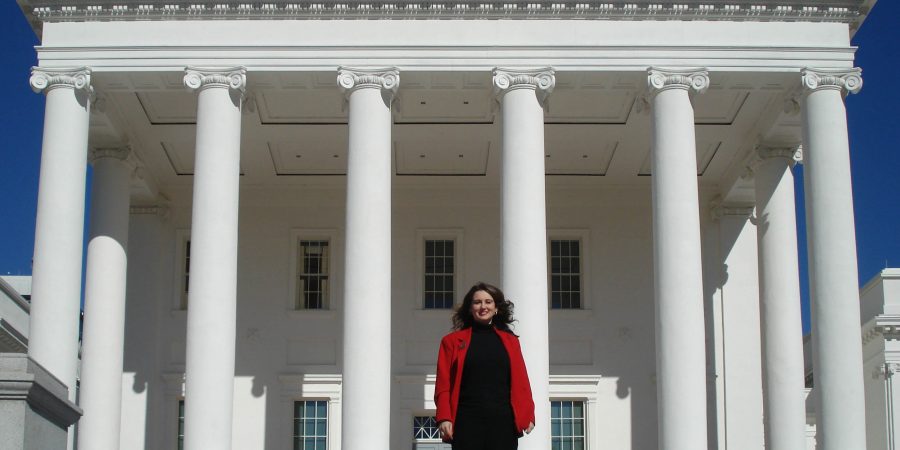 Many thanks to Virginia’s gracious Lt. Governor Bill Bolling and his able Chief-of-Staff Randy Marcus for Wednesday’s fabulous 1st Annual Bloggers’ Day at the Capitol. I am honored to have been included in such a great event.

Seventeen bloggers from around the Commonwealth spent Wednesday in Richmond. For me, the presentations on the Virginia political situation were among the day’s highlights. (Yes, I’m a nerd.) Delegate Tim Hugo noted that Virginia blogs changed the outcome of the Allen-Webb race, which means that Virginia blogs changed the balance of power in the U.S. Senate. Political consultant Boyd Marcus allowed that Republican demoralization over Sen. Allen’s loss led to the transportation deal. Combined with Mr. Hugo’s analysis, that would mean that blogs are also responsible for the possible tax hike. Arrgh.

Seriously, though, this underscores the importance of conservative blogs–and why politicoes should embrace them. The funniest moment of the day came during the Senate session, which started off with Senators introducing the various groups visiting the Capitol that morning, a group of students from a Virginia school, some members of the AARP, and so on. The applause was warm and enthusiastic. That is, until Sen. Ken Cuccinelli announced that a group of bloggers was present. After a brief hesitation, there was a smattering of lukewarm applause. It could have been less enthusiastic, say, if someone had announced a delegation from Al Qaeda. But blogs are here to stay, and pols would be wise to accept and appreciate the contribution that they bring to political discourse .

That’s why Lt. Governor Bolling’s Bloggers’ Day was such a great idea. There’s no substitute for face-to-face communication. And for those who rarely travel to Richmond, one full day set aside to talk with Virginia lawmakers and see them at work is a valuable help.

Equally important was the opportunity to get to know other Virginia bloggers. It was a great pleasure to meet the faces behind some of my favorite blogs, like CatHouse Chat and ShaunKenney. And if there’s one thing that’s better than making a new friend, it’s reconnecting with an old one. So it was a special treat to catch up with Jim Young, whom I knew back in the good old post-college days in Washington.

For more, check out the recaps by The Daily WhackJob and United Conservatives of Virginia.