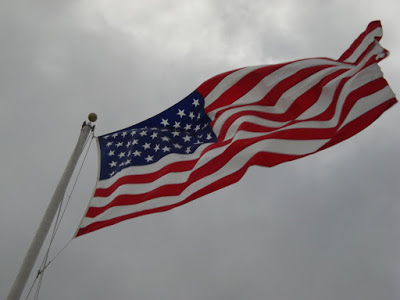 Twenty-seven years ago tonight, on a sheet of ice in Lake Placid, New York, the U.S. Olympic Hockey Team defeated America’s arch-rival. So unlikely was America’s victory over the Soviet Union that the event is still remembered as the “Miracle on Ice” and hailed by many as to the greatest upset in sports history.

It was a victory that the country greatly needed. Early 1980 was a bad time. Jimmy Carter was president, a good man in a job too big for him. The Soviets had invaded Afghanistan. Militant Islamist students had seized control of the U.S. Embassy in Tehran and were holding Americans hostage. Inflation was astronimical. National morale was abyssmal.

By winning victory after unlikely victory at the 1980 winter games, the hockey team gave Americans hope and revived national pride. On the night they faced the Soviets, the enthusiastic home crowd sang songs like “God Bless America” and started the “U-S-A!” chant. As the cheering goes on in the film Miracle, actor Kurt Russell portrays the team’s coach, the late Herb Brooks, telling his team: “Listen to ’em. That’s what you’ve done.”

Looking back, those Cold War days seem almost innocent now–days when American hope was revived by 20 Jedi knights on skates, wielding their hockey sabers against the (Evil) Empire to reclaim the honor of the United States of America.

Today, the Evil Empire has been defeated. Now, we face a much more insidious enemy. An enemy who, five and one-half years ago, destroyed towers that stood a five-hour drive from Lake Placid. Arms control talks won’t happen, because today’s enemy won’t negotiate. The doctrine of mutual assured destruction (MAD) doesn’t apply, because martyrdom, by their perverse understanding of the concept, is what they seek. And we won’t beat them at a hockey game, because, if we met in a rink, they’d sever our heads with saracen swords and use them in the place of pucks.

But even worse, far too many Americans disdain the United States and what she stands for. College professors preach a hate-America gospel. University of Colorado professor Ward Churchill wrote an infamous essay that blamed America for the attacks. On September 17, 2001, Stanford University professor of Middle East History Joel Beinin called for Americans to seek to understand “something about the historical conditions that inflamed the rage of those who attacked us on September 11” before they “embark on a long campaign against a shadowy enemy”.

Disdain for America has reached into K-12 schools as well. Earlier this year, a Wisconsin high school banned the “U-S-A!” chant. The excuse given is that it can be intended to mean “You Suck [expletive]!” Come on. Yes, kids will do stupid things. But that itself is a stupid reason to squash an expression of national pride. And the easy willingness of school officials to do so shows a disconcerting failure to appreciate the importance of patriotism–especially in a time of war.

Even today’s moral equivalency is more pessimistic. In the 1980s, the notion was: They’re as good as we are. Today, it’s: We’re as bad as they are.

Can America recover the will to win? Can we restore the patriotic belief in the great ideals that form the foundation of United States of America? Can we overcome this tendency toward pessimistic relativism?

Do you believe in miracles?

UPDATE: My ODBA sister blog Below the Beltway has video of the final 16 seconds of the game.